The State Emergency Service knew severe weather in northern NSW could worsen in the middle of the night and make it hard to alert residents, but it failed to warn the public of that risk before a record-breaking flood swamped Lismore.

In a statement to the Herald, the Bureau of Meteorology said it told the SES the day before the flood that a low-pressure system dumping torrential rain on Queensland would pose the greatest risk to north-east NSW on Sunday night and into Monday, and that a night-time escalation would make it difficult to alert the public.

But at a press conference called an hour after the 11am briefing on February 27, neither bureau hydrologist Ailsa Schofield nor SES commissioner Carlene York shared this concern about an overnight escalation in north-east NSW. Premier Dominic Perrottet and Emergency Services Minister Steph Cooke also attended the press conference. It is not clear whether any of them had direct knowledge of the bureau’s briefing. A government spokesperson said Perrottet and Cooke had “attended an operational briefing at 11am on 27 February, which raised the likelihood of a moderate to major flood event based on the best available information”.

Four people died in the floods and thousands remain homeless after the catastrophic event which is now the subject of an independent inquiry, with a final report due to be delivered at the end of next month.

York said at the press conference that the ground was very saturated because of La Nina, and any rain that fell in northern NSW over the next day or two had nowhere to go but into the state’s rivers. Schofield warned of the risk of life-threatening flooding in a number of NSW catchments and said the bureau would be “actively monitoring the rainfall that falls and will provide any updated warnings if and when required”. When asked specifically about Lismore at the conference, Schofield said the bureau expected the flood would be under the 2017 peak of 11.5 metres.

Twelve hours later, emergency services and local soldiers found themselves driving around Lismore streets with loud hailers and sirens blaring to evacuate residents. When the torrential rain drowned them out, they found themselves madly banging on doors instead, to wake residents. “We would stop at someone’s front yard, and no one in the community could hear us,” one agency leader said.

They managed to warn about 300 homes that the predicted flood was going to be much worse, but rising water stopped their efforts before they could reach thousands of other homes. By that time, the river was already over 10 metres and many evacuation routes were cut. Within hours, unaware residents would wake to water lapping their beds. They were trapped. Four people would die. The river would eventually peak at 14.4 metres on Monday afternoon – three metres higher than what Schofield had forecast at the press conference the day before.

When asked why the public had not been informed about this middle-of-the-night risk, the SES pointed out to the Herald that Schofield had said at the press conference “that the Wilsons River was forecasted to peak below the level experienced in Lismore in 2017”. That flood was largely contained below Lismore’s elevated houses.

On Sunday afternoon, emergency service personnel carried out their first doorknocking operation, asking residents of low-lying North Lismore and South Lismore if they would be staying or leaving. Residents told the Herald that they were not advised to leave. Most opted to stay based on flood height forecasts, and went to bed expecting the water would peak below their houses some time after 6am.

Member for Lismore Janelle Saffin said there was a clear discord between the SES and the Bureau of Meteorology in issuing warnings. She said their messages needed to be timely and better communicated, even telling the public they don’t know how dangerous weather patterns may behave.

“A former Northern Rivers SES controller, now living in Queensland, called me before the flood to warn of the threat posed by the low-pressure system travelling south,” she said. “But the bureau and SES didn’t seem to treat it as something urgent, then it became really urgent when it was too late. 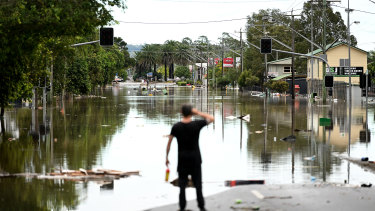 A street under floodwater on March 31, 2022, in Lismore. Credit:Getty Images AsiaPac

“I know many people went to bed based on the flood height forecasts given. If people were told that there is a rain bomb overhead, and we don’t know how it’s going to act in the middle of the night, you might have seen many people stay up that night or even leave.”

Lismore Mayor Steve Krieg said the warnings to residents were inadequate and too late, and that the community made preparations for what had been forecasted.

“Everyone was aware that a major low-pressure system was hovering off the coast,” he said. “If they had told us that there was a potential for it to move across Lismore overnight and no one could reach us as a result, that would have seen a lot more people move for higher ground.”

After the flood, locals vented their anger about inaccurate warnings and inadequate forecasting from the SES and the bureau, which repeatedly underestimated how much rain would fall and how big the flood would be. The bureau’s flood forecasts are meant to be within 30 centimetres of being accurate, 70 per cent of the time.

The SES relies on these forecasts to decide whether and when to issue evacuation warnings and orders for particular communities likely to be affected by a flood.

A senior representative in the multi-agency response working inside the SES Incident Control Centre in Lismore said he thought on Sunday night and Monday morning that by the time the SES received the bureau’s briefings, that had been overtaken by the fast-moving event.

“The information being given to the SES was too slow,” he said. “It led them to make false assumptions and after two or three hours it would be updated with these massive changes. It created a lot of confusion in the community because the information was out of date. That’s where the fail occurred.”

Key bureau workers embedded at SES headquarters in Wollongong, whose job involves “articulating forecast uncertainty” and helping the SES understand the possible impact of a flood, also went home at 5pm on Sunday. The meteorologist and hydrologist positions were created after a review of the 2017 Lismore flood, which recommended they work with the SES “for the duration of the event”.

In a statement to the Herald, the bureau admitted these workers went home at 5pm but said that a team of other forecasters and hydrologists worked around the clock to model flood behaviour and issue forecasts before and during the flood, for a number of catchments across NSW and Queensland.

A group of residents and business people told the Herald that the community needs regular and up-to-date forecasts and observations during a flood to make informed decisions, but the supply of information from the bureau and the SES in February, and during the 2017 flood, was slow, infrequent and did not reflect what locals were seeing for themselves in local rivers and creeks.

Lismore Citizens Flood Review Group co-ordinator Beth Trevan called for hourly updates during a flood, issued by local SES personnel. “That is how it worked very successfully for generations until the introduction of the control of all messaging from state SES headquarters from 2010 onwards,” she said.

Since the February flood and a second one in March, it has further emerged that warning systems in Lismore – including rainfall and river height gauges used by the bureau to inform its flood forecasting – were broken, or failed in the midst of the crisis. In some critical areas, the gauges were non-existent.

Three days before the February disaster, the NSW Department of Planning and Environment rejected Lismore City Council’s application for a $100,000 grant to improve its flood warning system. The proposed works – new rainfall and river height gauges, CCTV cameras of local waterways and a “community flood dashboard” – were deemed “premature”.

“What they are missing is the very localised large rainfalls, that sends pulses downstream, and that can have a huge impact on the outcome.”

Jane Golding, the hazard preparedness and response manager at the bureau, told a NSW Parliament inquiry into the floods that the location and operation of coverage of gauges, which are owned by the bureau, councils and other agencies, would need to be reviewed. In explaining the performance of the bureau on February 28, she said meteorology was an imprecise science.

“The forecast rainfall didn’t pick up the extremity of the event,” she said. “There are lots of different forms of computer models that we looked at. None of them really picked up – none of them picked up 775 millimetres in the headwaters of the Lismore. The upper range for the Northern Rivers was between 200 and 400 millimetres.”