How the pandemic sucked the life out of uni campus culture

When public health student Piper Horvat walks onto campus at La Trobe University it is, she says, “just dead”.

“You go into uni and no one is there,” she said. 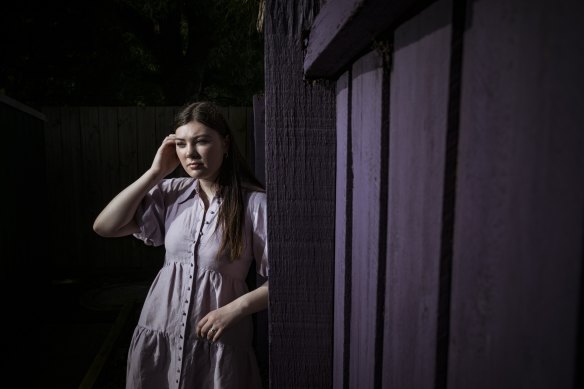 Horvat, 20, started at La Trobe in 2020, and spent most of her first two years off campus, studying from home thanks to COVID-19 lockdowns.

“It really just took away any opportunity to build those vital connections with people and utilise any services uni had,” she said. “It was, like, me in my bedroom with a laptop, so pretty grim.”

She’s been back at the Bundoora campus since the beginning of this year, but many classes are still online. “There is no student life anymore,” she said.

Her class may be a third full, and for lectures that would normally attract 50 people, barely half show up.

“It is disappointing. You want to come to uni to have fun and have these experiences alongside doing a degree, and there isn’t any, so this sucks,” Horvat said.

In 2020, Victorian universities shifted to remote learning due to necessity during the pandemic and many will continue to offer online or hybrid learning options in 2023. It’s made university more accessible for many students, but the combination of that and cost-of-living pressures has had an impact on student university culture.

University of Melbourne Student Union president Sophie Nguyen said the pull to attend university on campus had diminished for many. “Our lectures are pretty empty,” she said.

“There is a cohort of students who can just do their lectures online rather than just come into class.” 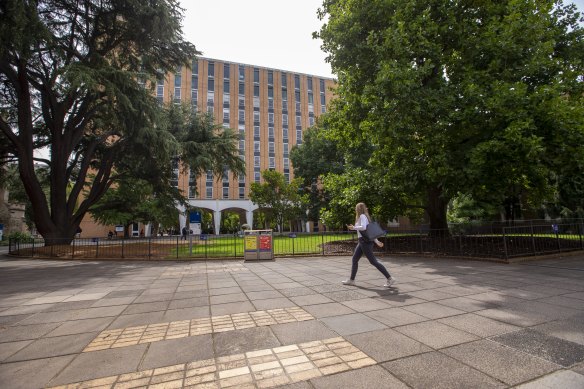 Universities are not the vibrant, busy places they once were. Credit:Wayne Taylor

Nguyen, who is in her fourth year of university, values campus life. But, she said, there was a generation of students who never experienced it.

“I think students kind of either don’t know or don’t care enough about the kind of extracurricular activities or the general socialising on campus, that isn’t just your lectures and [tutorials],” she said.

This semester, the University of Melbourne is aiming to have 80 per cent of students on campus.

From first semester 2023, the university’s undergraduate program will be on campus and graduate program students will have the option of campus-based, online and dual-delivery courses, depending on the program. 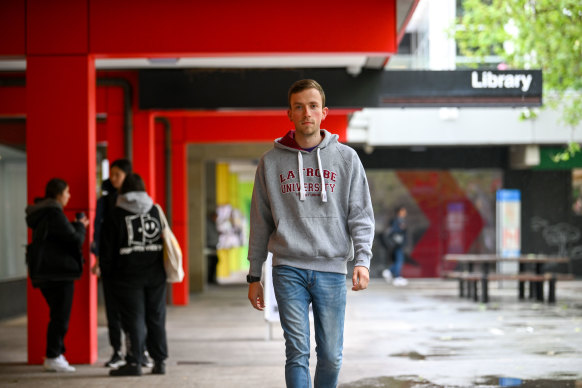 A spokeswoman said fewer than 10 per cent of subjects were delivered online, but many on-campus subjects had online options.

La Trobe University Student Union president Joel Blanch said that before the pandemic there were a number of businesses that catered to a thriving student body. Many were now gone.

“In our main precinct at La Trobe, there are five or six empty businesses just sitting there. There are half the number of businesses there used to be at La Trobe,” he said. “They can’t seem to find vendors because there aren’t enough students.”

Students were slowly filtering back on campus, he said, but many still preferred online classes, so they could be flexible with their day. Twenty per cent of classes were online, and some students preferred not to commute.

Blanch worries that campus culture won’t recover. The university cut the funding to the student union by $2.7 million between 2020-2021. In 2020, the La Trobe Student Association, a separate entity, formed.

“It means the engagement in events and clubs has significantly reduced and that affects the culture of the entire university. That’s been a sore point,” he said.

The student union’s budget has since increased to less than one-third of the 2019 amount, to provide academic advocacy and student representation for all La Trobe campuses.

“Student life at La Trobe has taken a massive hit. When students don’t feel like they have the same voice and control over culture, clubs and events at the uni, of course they aren’t going to want to come back,” Blanch said.

‘The uni parties I heard of from my parents, these sorts of things which are at the core of student culture – that’s been ripped away.’

The university allocates its students services and amenities fee in consultation with students; and the services are provided by the university, the student union at the Bundoora campus and by the student association at the Bendigo, Melbourne, Mildura, Shepparton and Wodonga campuses.

“While funding to the [student union] has reduced from 2019 because they no longer represent regional campuses, overall investment in student engagement and support activities has increased,” a university spokesperson said. 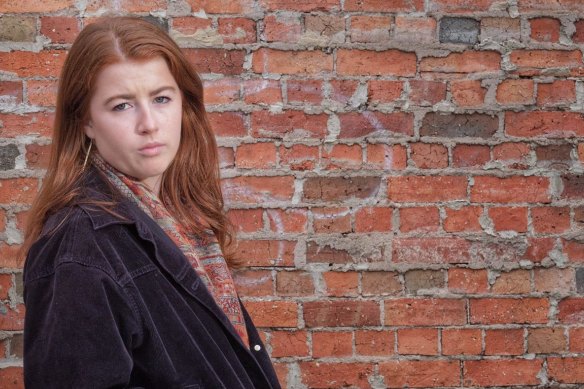 National Student Union president Georgie Beatty feels a sense of loss for her time as a university student.Credit:Luis Ascui

Monash University Student Union president Ishka De Silva said the student population had made a successful return to the Clayton campus, as Monash had focused on in-person classes.

Swinburne University has moved to a blend of both online and in-person education, and a spokesperson said there had been an increase in parking, events, foot traffic and demand for services. However, a student union spokesperson said Swinburne campuses were still fairly sparse.

National Union of Students president Georgie Beatty said there was “no doubt campus culture had changed as a result of the pandemic”.

But she also said the past 2½ years had made university more accessible for students with disabilities and for those who worked casual, low-paying jobs amid rising cost-of-living pressures.

Beatty said she didn’t know anyone who was living out of home and managing full-time university.

“Study and university can’t be your number one priority because you are struggling to survive. It’s hard to come in, especially if it’s not something you are used to doing,” she said.

Beatty started university in 2020 and feels a “sense of loss for what could have been”.

“The uni parties I heard of from my parents, these sorts of things which are at the core of student culture – that’s been ripped away,” she said.