** Do you know Sarah Moulds or know anything more about what happened? Email: [email protected] **

A foxhunter condemned by the RSPCA when footage emerged of her appearing to kick and punch a distressed horse has gone into hiding after receiving death threats and ‘fearing for her life’, neighbours revealed today.

Primary school teacher Sarah Moulds, 37, is said to be ‘terrified’ of returning to her family home in an upmarket Leicestershire village after the shocking video of the incident over the weekend sparked outrage.

The married mother-of-two, who was involved with her local Pony Club, has closed down her social media and is staying at a secret location away from her semi-detached £350,000 property after receiving abuse and threats.

And the Pony Club, which claims to be the world’s largest equestrian youth organisation with more than 30,000 UK members, has now axed her as a team manager while condemning her actions as ‘unacceptable’.

In the sickening video filmed on Saturday afternoon, Mrs Moulds first kicks the pony in the chest area before hitting it repeatedly around the face as she leads it back to a horse box while on a hunt.

A neighbour and fellow rider in Mrs Moulds’s home village in east Leicestershire, said: ‘She’s had to go away after receiving death threats and loads of vile abuse. It’s awful and has got very much out of hand.

‘She fears for her life. She has young children and she is worried about them as well as herself. She’s well known and respected in equestrian circles and her social media was bombarded with comments from very angry people after the video went viral and she’s now had to close it down.’ 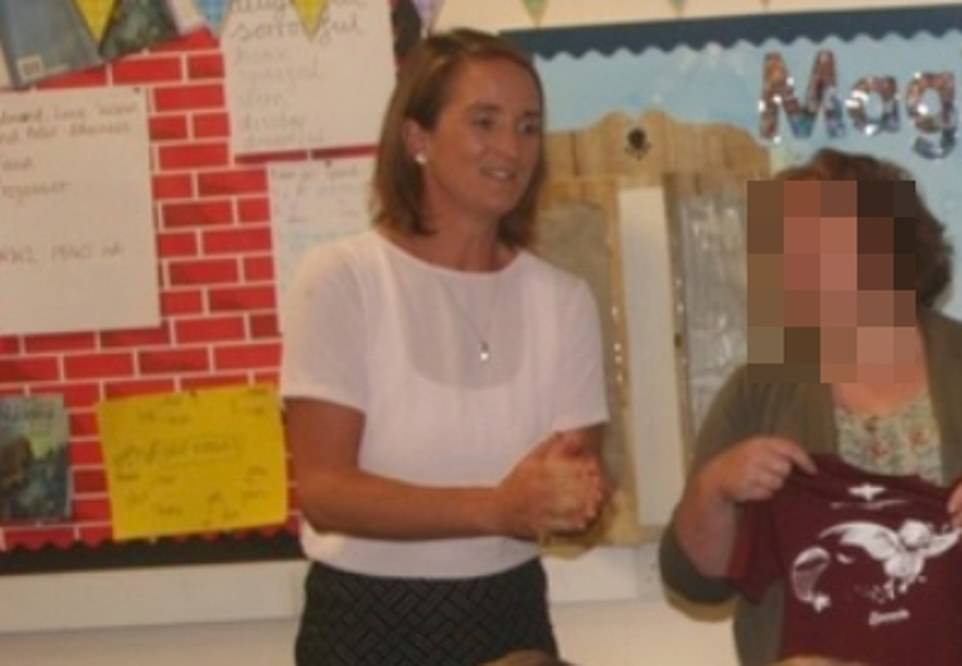 The neighbour added: ‘I don’t know what happened and in what context but what is now happening to Sarah is horrible. She’s terrified of being in her own home in case someone targets her or her kids there.’

An RSPCA business card with a handwritten note has been pinned to the front door of her empty house, where she lives with husband Daniel. It states: ‘Please get in contact ASAP. Quote incident number 00748573.’

Mrs Moulds is being investigated by the animal cruelty charity after the footage was viewed more than two million times. The RSPCA described it as ‘really upsetting’.

And a Pony Club spokesman told MailOnline today: ‘We are aware of the video circulating showing unacceptable treatment of a pony and we wholeheartedly condemn this behaviour.

‘The welfare of horses and ponies is of the utmost importance to The Pony Club, therefore the lady in question has been removed from her voluntary position as a team organiser for a Branch.

‘The Pony Club is a youth membership organisation and as such, she is not a member of The Pony Club.’

Mrs Moulds, who rides with Rutland-based Cottesmore Hunt – one of the oldest in Britain – is also team leader of the Cottesmore branch of the Pony Club.

She is a teacher at Somerby Primary School and a director of the Knossington and Somerby Pre-School. It is understood she has been granted a period of leave from work. 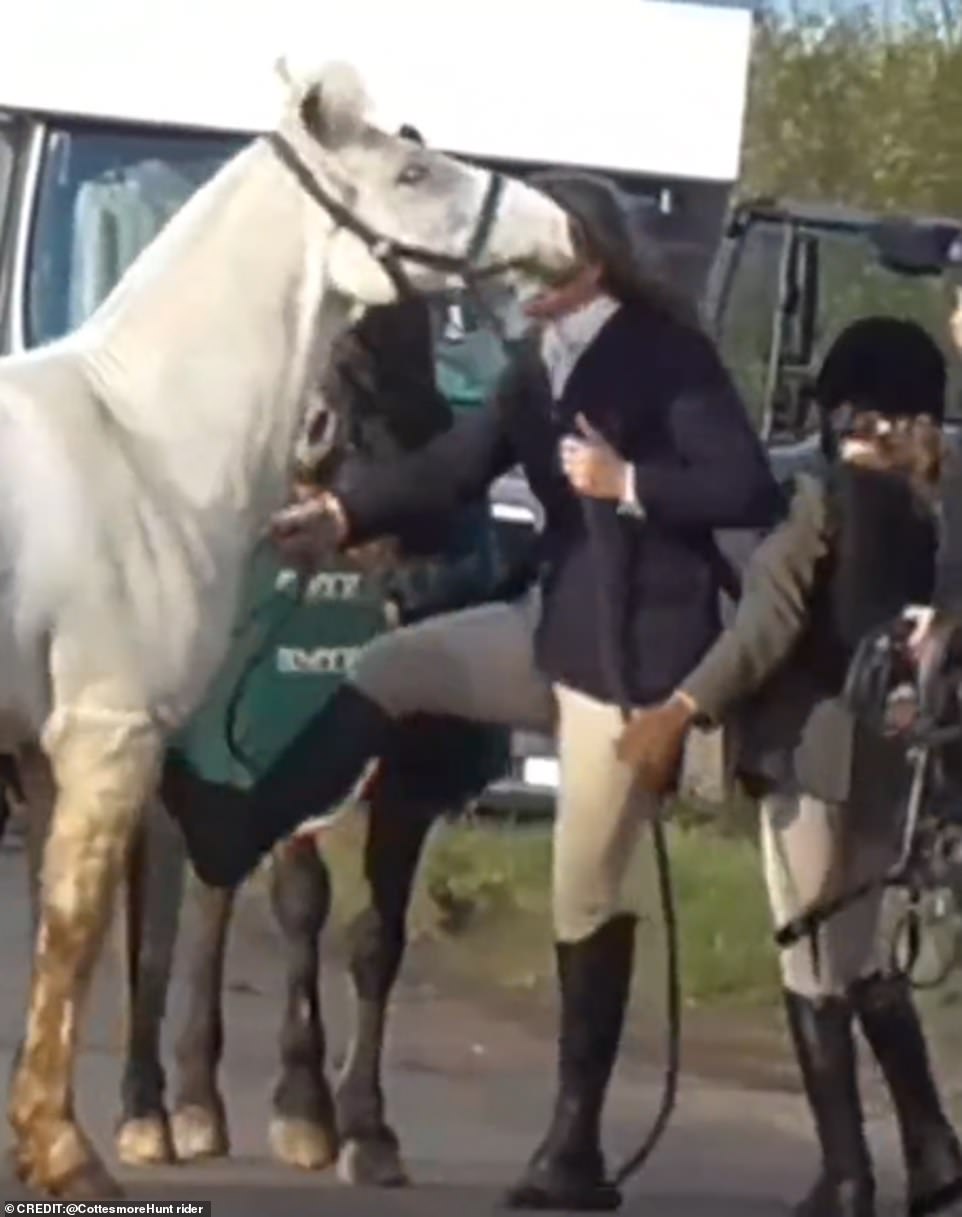 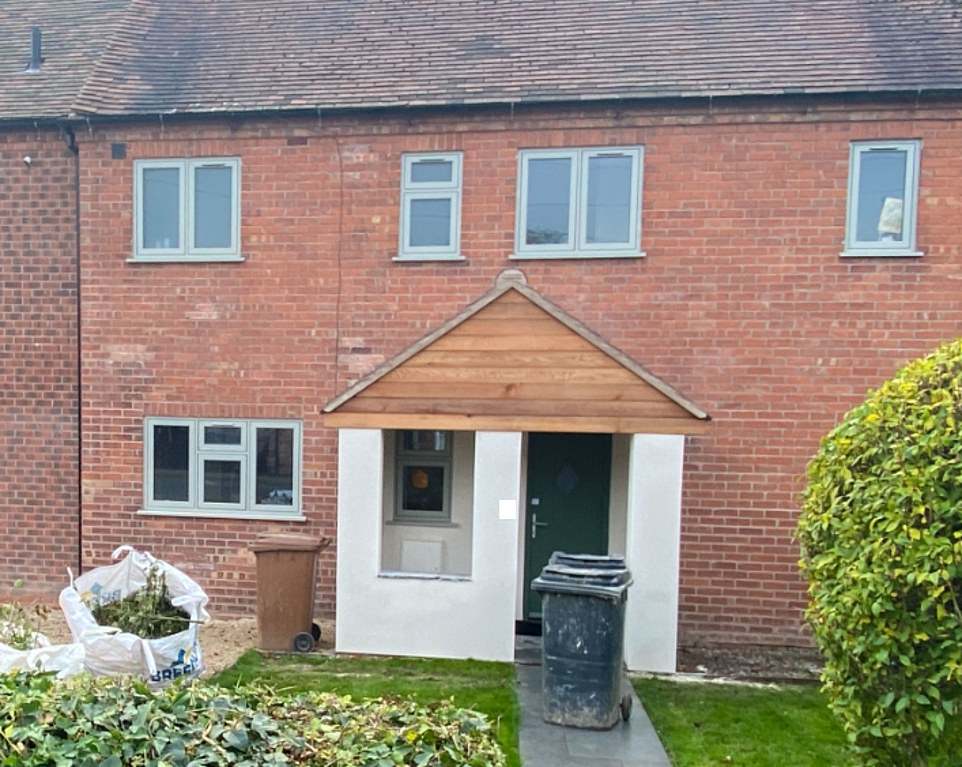 A spokesman for the Mowbray Education Trust, whose schools include Somerby Primary School, told MailOnline: ‘We are aware of an incident over the weekend involving a member of staff.

‘As there may be the potential for an investigation, it is not appropriate to comment at this time.’

The school’s headteacher declined to say whether Mrs Moulds was working as usual today. She said: ‘We’ve had numerous media inquiries but I’m sorry I cannot say anything about the matter.’

The video of her allegedly attacking a horse was shared by Hertfordshire Hunt Saboteurs, an anti-hunting campaign group, and has been condemned by the UK’s national body for hunting as well as campaigner Chris Packham.

In the footage, a white horse trots away from the back of a horse trailer before it is stopped by a young rider.

A woman dressed in cream breeches and a navy jacket then grabs the reins of the animal before she kicks its body and slaps it repeatedly in the face as it tries to pull away.

The group said that the incident took place during a Cottesmore Hunt meet and demonstrated ‘violence running through their veins’.

The Hunt said it did not condone the actions shown in the video ‘under any circumstances.’

Another neighbour of the horsewoman said: ‘We haven’t seen her since this all blew up. Everyone’s talking about it. It is shocking, As a neighbour she’s OK. 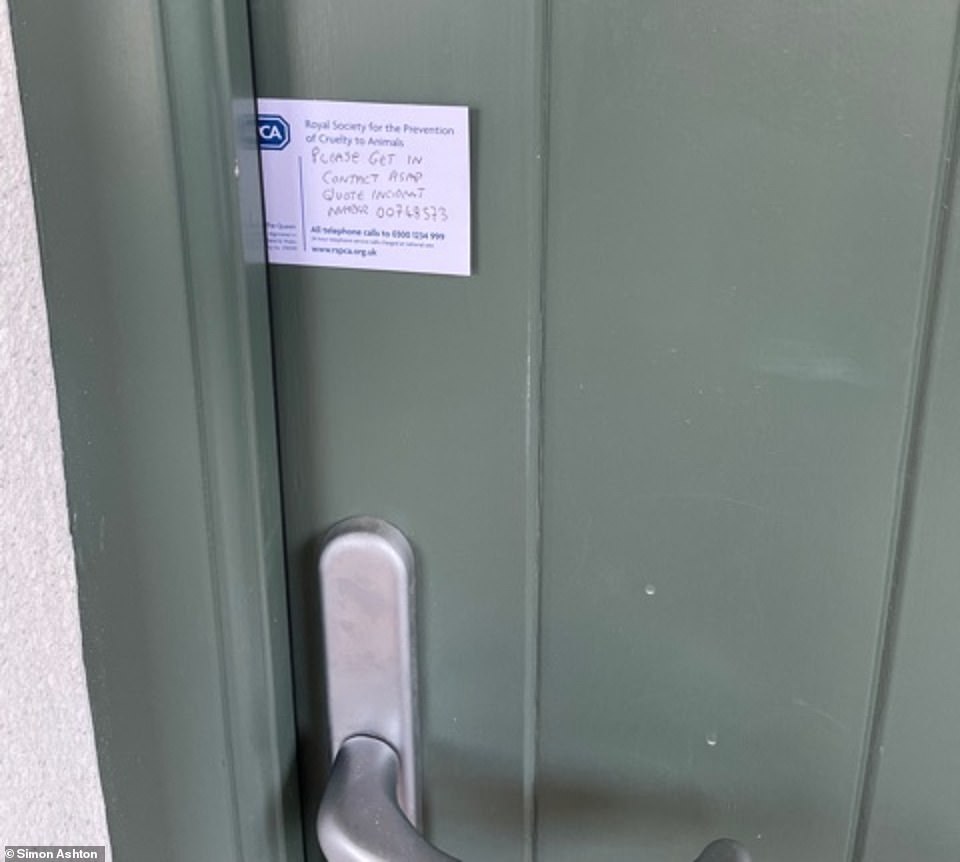 ‘She’s involved with many children at school and at the Pony Club and this sends out a dreadful message. But I’ve not heard her version of events so do not wish to comment on her action.’

Sources close to the Cottesmore Hunt say Mrs Moulds had become anxious after the horse had ‘gone off with her daughter’ and failed to respond to commands.

In a statement on the Huntingleaks website, anti-hunt campaigners criticised the involvement of children.

They said: ‘Children should not be taken out Hunting. Not only will they be exposed to incredible animal cruelty, but there is always a risk of personal injury whilst out on a hunt.

‘They may be deemed ‘accidents’ but they could be easily avoided by simply not allowing children on hunts and we would ask people in the equine world to speak out on this point.

‘Children should never be exposed to animal abuse, but it’s even more traumatic for them when the animal abuser is in a position of trust; in this case a teacher and pony club team leader attacking animals when they lose their temper (something that many fox hunters are prone too).’

The Pony Club have so far not responded to questions about their attitude to children joining hunts.

But all have condemned the actions of Mrs Moulds, a senior Year 3 teacher and director of the Somerby Primary School as well as a trustee on the school’s charity board. 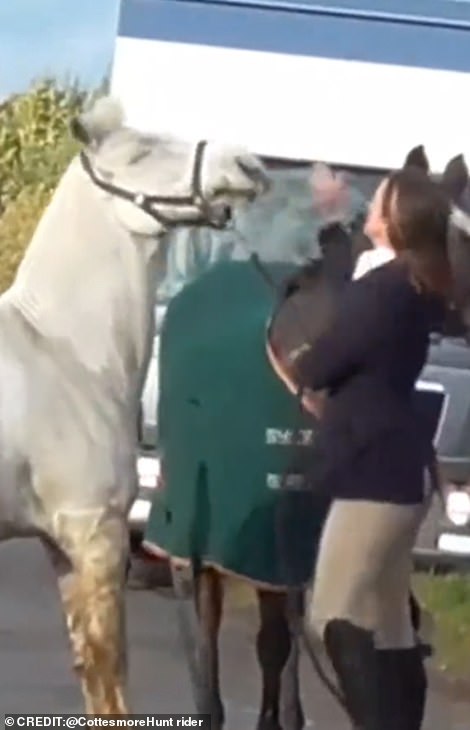 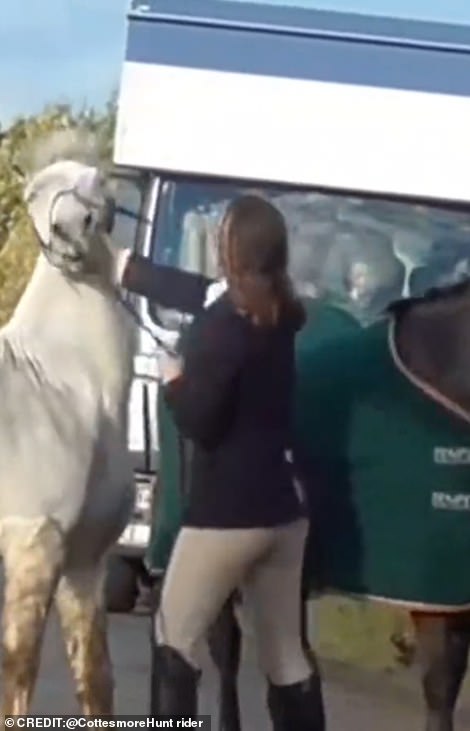 The Hunting Office has criticised the footage and said the perpetrator does not belong to its hunting associations, adding that ‘it expects the highest level of animal welfare at all times’.

And the Cottesmore Hunt said it did not condone the actions shown in the video ‘under any circumstances’.

The group said it ‘will be reminding all of our supporters that this will not be tolerated,’ according to ITV.

Anti hunting groups said that the video demonstrated that those on hunts have ‘violence running through their veins’.

Meanwhile, BBC Springwatch presenter and zoologist Megan McCubbin said the footage showed ‘disgusting behaviour’. She said: ‘Yet another ugly side of an activist some call ‘sport’.’

Anne Brummer, the CEO of animal welfare organisation Save Me Trust, said: ‘Absolutely disgusting, she should be prosecuted and not allowed near a horse again. No one around her seems socked, what is wrong with these people.’

The RSPCA has also confirmed it is launching an investigation into the incident after the video sparked outrage online. 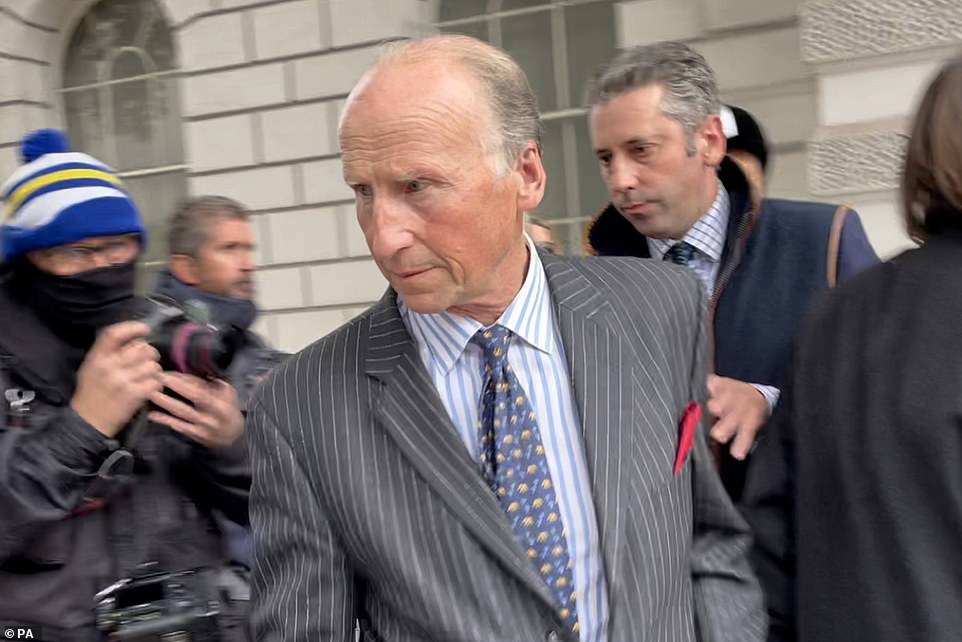 Last month a prominent huntsman was convicted of giving advice to countrymen about how to covertly carry out illegal fox hunts. Mark Hankinson, pictured on October 15, was found guilty of encouraging or assisting others to commit an offence

The charity acknowledged it had been made aware and said: ‘This footage is upsetting. We will always look into, and if necessary, investigate any complaints made to us about animal welfare.

Meanwhile, a neighbour said Mrs Moulds’s house, which she moved into in February last year, is being turned into her ‘dream home’.

She lives in the 1960’s semi, which she bought for £245,000 with her plumber husband Daniel and their two young children. They have extended it substantially and it is currently undergoing additional building works.

The neighbour said: ‘They’re always doing improvements and have put on a big extension. Dan’s done a lot of the work himself. When it’s finished it will be their dream home. They must have added £100,000 value to it.’

The redbrick property is in a desirable rural village which is a popular riding area with many locals owning horses or going to a nearby equestrian centre.

The house is just mile from the primary school where Mrs Moulds teaches and which is very near her parents’ home.

It comes as the reputation of hunting in the UK was damaged last month after a prominent huntsman was convicted of giving advice to countrymen about how to covertly carry out illegal fox hunts.

Mark Hankinson, the 60-year-old director of the Masters of Foxhounds Association, was found guilty at Westminster Magistrates’ Court of encouraging or assisting others to commit an offence and ordered to pay £3,500.

He was charged after footage from two webinars held in August last year for MFHA was obtained by anti-hunting activists who passed it to the media and the police.

Mr Hankinson told members of the Hunting Office to use legal trail hunting where horseback riders and hounds follow a previously laid scent, as a ‘smokescreen’ for criminal activity, the court heard.

Trail hunting replicates a traditional hunt without a fox actually being chased, injured or killed, and although there is always a danger that hounds will accidentally come across the scent of a fox, they should then be stopped to avoid this becoming a criminal offence.

In the clips he acknowledged that trail hunting, which was devised in the wake of the Act to replicate the outlawed sport, was a cover for the chasing and killing of foxes.

Under the rules, horseback riders with dogs can legally follow trails laid with scent, instead of chasing a live animal. However, if hounds were to pick up the scent of a fox and chase it as a result of the trail, then there are no legal consequences.

In one webinar he told members: ‘It’s effectively illegal to intentionally hunt a wild mammal with more than two dogs but you will see there’s quite a few exemptions.

‘So obviously trail hunting, which is our main card, is a critical one, but that trail hunting needs to be visible and credible and those involved need to be robust when questioned.’

He added: ‘Some people say, ‘What’s the point in laying trails?’ But I think it’s fairly self-explanatory. If you haven’t laid a trail you won’t be covered by insurance… Don’t forget it’s a much more serious offence to commit perjury in court than commit offences under the Hunting Act.’

** Do you know Sarah Moulds or know anything more about what happened? Email: [email protected] **