‘I can’t be bothered’: Victorians battling ‘compounding fatigue’ of lockdowns

Reports of increased family conflict and bullying and harassment at work spiked significantly in the first week of Victoria’s fourth lockdown, as one of Australia’s biggest providers of corporate, government and private psychologists noted a huge increase in demand.

Rhonda Andrews, chief executive of the city-based Barrington Centre, said many of the company’s 320 psychologists around the country had been “pulled in to assist in Victoria” after an 82 per cent increase in demand for support between Thursday, May 27, and Thursday, June 3. 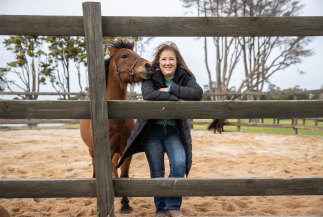 Business consultant and leadership coach Vicki Macdermid, who uses horses in her leadership training work, describes this lockdown even after a little over a week as “depleting – and I’m by nature a very optimistic person”.Credit:Simon Schluter

Victorians had struggled to regain the techniques they used to get through the 2020 lockdowns and were battling with “compounding and cumulative psychological distress and fatigue”.

“All of us learned new things last year. It’s interesting for me to see people have thrown that out the window. I think it’s because of this overlay of … compounding psychological stress and fatigue. That’s the main flag for me, why people aren’t picking up what they did well last year.”

‘There is something about this time in particular leading to that real, “I just can’t be bothered” feeling.’

People are “just exhausted” she said: “Instead of saying, ‘OK, we’ve done this before’, they’re just going ‘I can’t be bothered, I just can’t face it’.”

The group, whose clients include large employers in government departments and private industry sectors including retail, hospitality, manufacturing and professional services, received 200 extra patients referred in the first week of lockdown.

The new lockdown was “worse for most in Melbourne” than those in the past because many had experienced an extended period of worry about going back into it and had quickly become “physically and mentally exhausted”, according to Tamara Cavenett, chief executive of the Australian Psychological Society.

“They’re saying it feels like it’s draining on them; everyone was sort of at a point where they were feeling they were getting back into normal life and to have that taken away they just feel really exhausted and drained,” said Ms Cavenett, a clinical psychologist.

“They’re also saying they feel more irritable and have a shorter fuse.”

Uncertainty and a loss of a sense of control was contributing to widespread feelings of depression and anxiety.

“There is something about this time in particular leading to that real, ‘I just can’t be bothered’ feeling. It’s the repeated nature of it that’s draining motivation.”

Ms Cavenett urged people to acknowledge how they were feeling without being self-critical or judging themselves, and attempt to make a schedule, eat, exercise and sleep properly and “focus on the day in front of you”.

Vicki Macdermid, a leadership consultant, executive coach and client of Rhonda Andrews, described this lockdown as “depleting – and I’m by nature a very optimistic person”.

“It’s exhausting,” she said. “You feel like you’ve been punished somehow for living a normal life or trying to live a normal life … and it’s the mental stuff that goes on around when is this going to end?

“It’s the whole uncertainty thing and there is frustration about how this whole thing came about in the first place … people feel completely overwhelmed.”

Ms Macdermid, who includes horses in her leadership training programs, said walking with them was “the absolute antidote: I should be spending more time with them and my two dogs.”

Betty Chetcuti, a Hawthorn East psychologist and board member of the Australian Association of Psychologists, described the sentiment of clients and others as unsettled and said she had been disturbed by “the degree of depression [people] are falling into” relatively quickly during this lockdown.

“People are struggling with their workload when their capacity has been impaired because they are struggling in lockdown … it is making them feel like a failure.”

She said she was concerned for the safety of some clients who “usually don’t go anywhere near feeling in suicidal ways. I’m really, really aware how severely people are experiencing the world.”

“They are feeling a sense of agitation, not just slight but something where they just wake up feeling like there’s a tremoring within their body and they’re incapacitated because everything has changed and they don’t know what to do about it,” she said.

“It’s depressing and demotivating, and really concerns me.”

Ms Chetcuti is particularly concerned with the level of despair among small business people. She recommended locked down people generally make a “COVID kind of routine; we just have to have a plan so that helps us feel hopeful that things are going to be OK”.

If you or anyone you know needs support call Lifeline on 131 114, or Beyond Blue’s coronavirus mental wellbeing support service on 1800 512 348.