In the Vatican, Pell’s legacy gained him international influence but also enemies

George Pell returned to Rome in late 2020 intent on cleaning out his apartment just outside St Peter’s Square ahead of making Sydney his permanent home. He never left.

As Italy’s COVID-19 cases surged that winter, Pell sat in his armchair watching the Vatican corruption and financial incompetence scandal he worked to uncover explode publicly. His home had recently become a focal point for conservatives preparing their platform for the eventual election of Pope Francis’ successor. 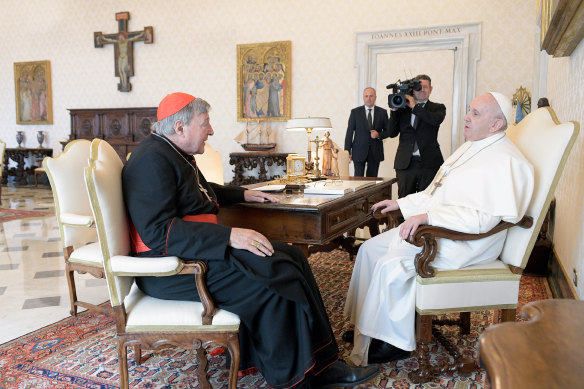 Cardinal George Pell (left) met with Pope Francis on his return to the Vatican after his sex abuse conviction and acquittal in Australia.Credit:Vatican News/AP

Once the Vatican’s third most powerful prelate, Pell was nine years ago tasked with reforming the Vatican’s murky finances as Francis’ treasurer. It involved generating balance sheets, conducting audits, and attempting to loosen the powerful Secretariat of State’s grasp on a significant portion of the Holy See’s assets.

He was dubbed the “Eliot Ness of the Vatican” by a long-time supporter, then Australian Catholic University vice chancellor Greg Craven: a “good guy” trying to clean up “hundreds of years of financial mess and exploitation”.

Pell, who died in Rome on Wednesday (AEDT) aged 81, rose from humble beginnings to become Australia’s most prominent and controversial Catholic figure since Daniel Mannix, the Archbishop of Melbourne for 46 years and one of the most influential public figures in 20th-century Australia.

The son of a non-practising Anglican from Ballarat, he poured beers in his parents’ pub before entering the seminary. He began his service in the Swan Hill parish in regional Victoria and rose to the third-most senior role in the Vatican.

Hailed as a modern giant of Catholicism, Pell’s legacy is complex and conflicted. In Australia, it is forever tarnished by accusations he failed to act against paedophile priests in Victoria in the 1970s and ’80s as head of the church. A royal commission in 2016 found Pell was not only conscious of child sexual abuse by clergy, but “considered measures of avoiding situations which might provoke gossip about it”.

Pell was made a cardinal by Pope John Paul II in October 2003, while he was archbishop of Sydney. Ten years later, Francis appointed him a member of his “council of cardinals” and the year after put him in charge of Vatican finances.

His status in Rome gave him huge international influence but made him powerful enemies as he tried to ascertain just how much money the Secretariat of State had in its asset portfolio, what its investments were and what it did with the tens of millions of dollars in donations to the Pope from the faithful.

After a years-long tug-of-war between Pell and those who managed the purse strings, he wasn’t able to impose international accounting and auditing standards – thwarted by his nemesis, Italian Cardinal and then Secretariat of State Angelo Becciu. 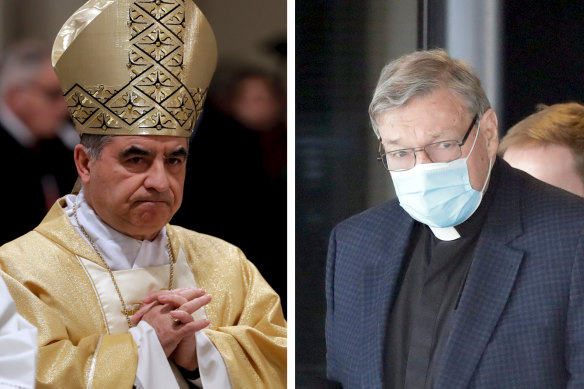 His suspicions and reforms at the Vatican, however, were later vindicated. Becciu was sacked in 2020 after a scandal involving a shady London real estate deal lost the Vatican €350 million. A probe also discovered the Vatican paid tens of millions of euros in donations to Italian middlemen to manage the deal.

Pell’s proposed laws for financial transparency in the Church were reinstated. “I underestimated the ingenuity and resilience of the opponents of reform,” Pell said in September 2021, adding, “they didn’t like change, they didn’t understand what was being proposed.”

Becciu remains on trial in a Vatican tribunal for alleged financial crime including of abuse of office, embezzlement and conspiracy.

“I never, never thought it would be as Technicolor as it proved,” Pell said of the scandal. “I didn’t know that there was so much criminality involved.” 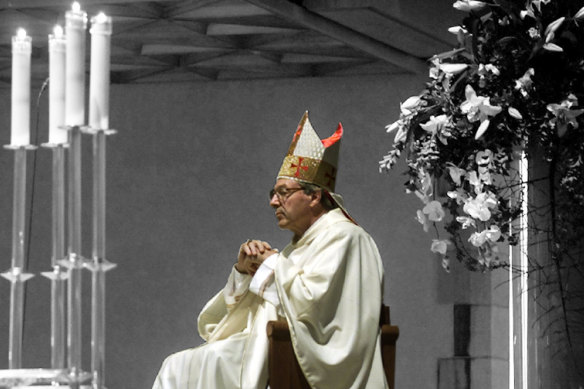 Pell took leave from his Vatican duties in 2017 to respond to allegations of historical sexual abuse in Australia. His 2018 conviction on five counts of sexually abusing two boys in St Patrick’s Cathedral in the 1990s was overturned, but not before he spent 404 days in jail.

He had given evidence three times before Australia’s royal commission into institutional responses into child sexual abuse between 2014 and 2016.

He returned to Rome after his acquittal by the full bench of the High Court in 2020, enjoying a well-publicised papal audience and regular participation in Vatican events.

Francis thanked Pell for his “witness”, and praised his work in the economic sphere. 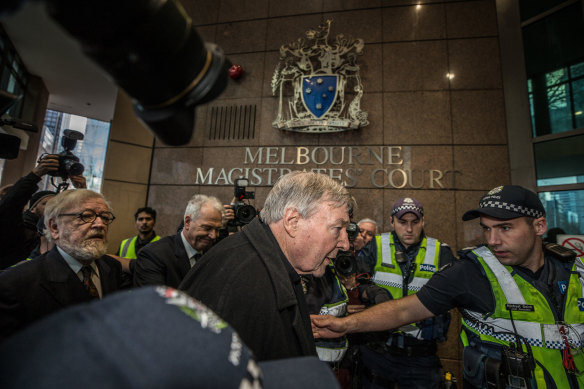 George Pell arrives at Melbourne Magistrates’ Court in 2017 to face historic sexual assault charges. After a first jury could not reach a verdict, a second convicted him. He was acquitted on appeal in 2020.Credit:Jason South

“It was Pell who drew up the outline of how we could move forward,” the Pope said in a pre-Christmas interview with Mediaset that year. “He is a great man and we owe him so much.”

Even some of his fiercest critics within the church – and there were many, both in Australia and internationally – believed in his innocence.

“Cardinal Pell and I had had our differences and that’s to put it mildly,” Father Frank Brennan, a Jesuit priest and professor of law at Australian Catholic University said in 2021.

But there was “no doubt” that Pell was innocent and was “made a scapegoat”, he said.

Forthright and direct, Pell was viewed as a bully in some quarters and once admitted in a television interview to having a formidable temper that he “almost never” showed.

His pursuit of Becciu continued well into last year. In May, Pell accused Becciu of providing incomplete information during his testimony and of thwarting transparency efforts. He accused Becciu of using his previous role as a top papal aide to block audits of the Vatican Secretariat of State’s finances and to intimidate, bully, and fire the auditors themselves.

He also criticised Becciu’s record in the pursuit of financial transparency, namely $US1.6 million in payments made to the Australian branch of Neustar, a technology company providing internet analytics that also offers global communications services and internet domain names.

Supporters often voiced public suspicion that Becciu had a hand in the allegations against Pell.

After his acquittal, Pell suggested Becciu orchestrated the allegations against him in 2017 to stop his attempted reforms. He said at the time there was “some evidence but no proof” that figures within the Vatican conspired to destroy him.

Becciu has denied ever using the money to influence Pell’s legal proceedings.

Pell did not live to see the Vatican scandal reach its conclusion but he will, in the end, return to Sydney.