London: Prime Minister Scott Morrison says there would be at least 1000 coronavirus cases in Australia every week if the international borders were to open, even when vulnerable people are vaccinated.

Mr Morrison was asked by Perth radio 6PR to clarify Health Minister Greg Hunt’s comments earlier this week that international travel could remain off-limits even if the entire population is vaccinated. 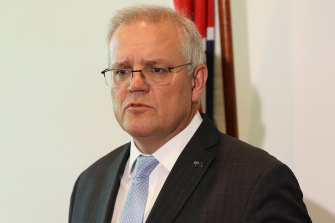 The prime minister said Australians had become used to dealing with no cases and opening the borders would end the National Cabinet’s stated goal of zero community transmission of COVID-19.

“If we were to lift the borders and people were to come then you would see those cases increase and Australians would have to become used to dealing with a thousand cases a week or more,” Mr Morrison said.

“Now it is true that our most vulnerable populations would be vaccinated but I don’t think Australians, particularly Western Australians, would welcome restrictions and closures and border shutting and all of those things again out of states’ concerns about the rising numbers.

“So everyone needs to get on the same page about that.”

Asked if that meant the entire world would need to be vaccinated before Australia can reopen, Mr Morrison said it was a “moving situation.”

“We can’t control what is happening in the rest of the world,” he said, adding that quarantine-free travel had already opened to New Zealand.

He said work was underway to open a travel bubble with Singapore but ruled out similar pathways for Europe, United States, India, Indonesia, Papua New Guinea and other countries with large outbreaks.

“Australians, I don’t think, would welcome the incursion of the virus into the country,” he said.

The federal government closed Australia’s borders in March 2020 and has repeatedly extended the travel ban, which remains in place until mid-June but likely until at least the end of the year after the delays to the vaccination program.

The closures led to tens of thousands of Australians spending months stranded overseas because of the caps placed on the number of quarantine spaces.

Health experts now fear Australians won’t be vaccinated until the end of next year. Qantas has pushed back its planned reopening of some international routes until October but is sticking firm to that timetable despite the ominous warnings from the federal government.

CEO Alan Joyce has said Australia risks being left behind if the borders stay closed after the country achieves herd immunity.