Inside the rotting remains of abandoned £25m Billionaires' Row mansion

Haunting images have revealed the decaying ruins of an abandoned £25million mega-mansion left to rot in London’s ‘Billionaires’ Row’.

The gigantic Georgian home is thought to have stood empty for years on the ultra-exclusive street of Bishops Avenue in Hampstead.

Made up of 66 of some of Britain’s most expensive properties, the road’s former inhabitants have included the super-rich Sultan of Brunei and Canadian pop royalty Justin Bieber.

Urban explore Liam Heatherson, 26, ventured into the colossal wreck to capture the eerie remains inside, where graffiti coats the walls and crumbling ceilings cover the previously pristine cavernous rooms. 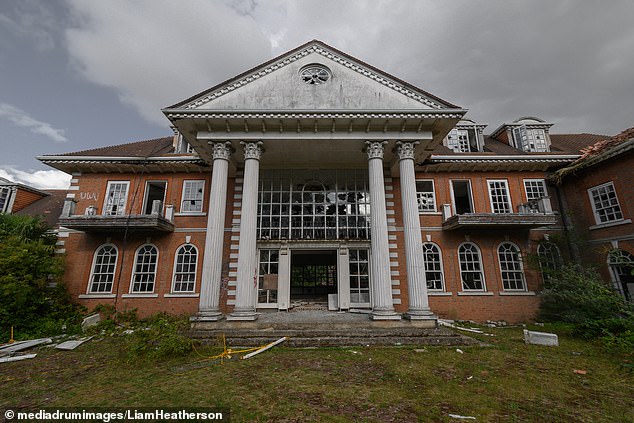 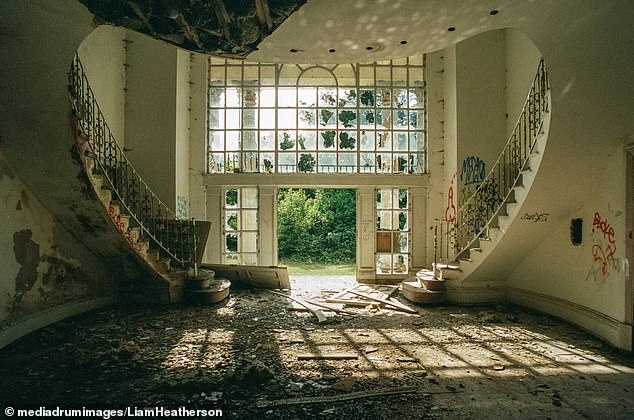 The gigantic home is thought to have stood empty for years

The site of the property, which is known by locals as ‘The Towers’ and is thought to have been abandoned for decades, was first owned by British actress and music hall legend Gracie Fields before it was knocked down in the 1970s.

The current mansion then took its place, and was reportedly snatched up by the Saudi royal family during the Gulf War for an estimated £25million.

The Towers is the largest mansion on the road, and is now rotten, overgrown and falling apart, with windows smashed and mould growing in its gutted bedrooms. 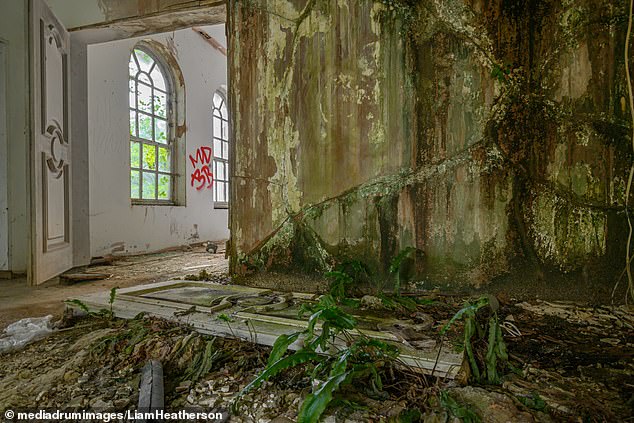 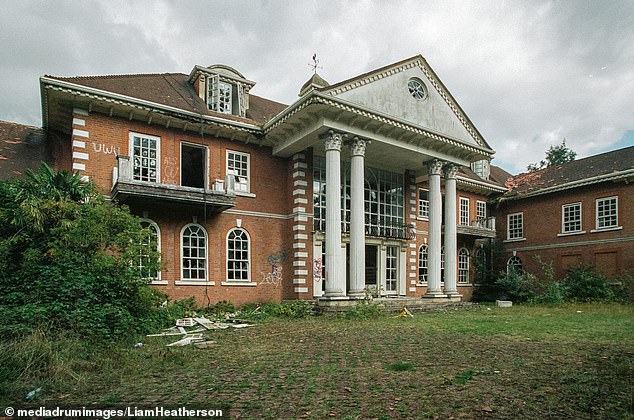 The latest photos were captured by ‘urban explorer’ Liam Heatherson, who ventured into the decaying Georgian-style home 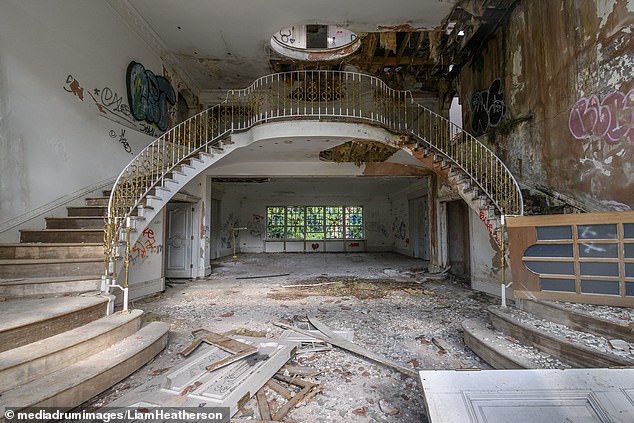 Its once opulent entrance hall, with its grand staircases, is now a crumbling wreck caked in graffiti

The 66-house street has been home to some of the world’s most wealthy, including Saudi royals, Heather Mills and Sir Billy Butlin – founder of the holiday camps.

However, many of the luxury homes on the street have been uninhabited since they were purchased in the 1980s.

A row of 10 houses, worth £73million, has stood empty ever since they were reportedly bought by the Saudi royal family. 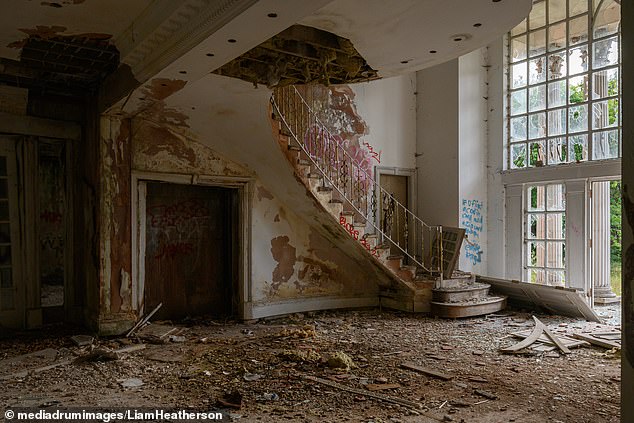 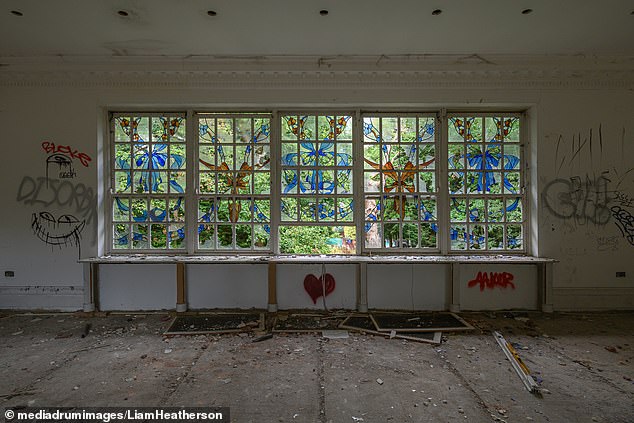 The home is on Bishops Avenue, which once counted Justin Bieber as one of its residents

Liam, who has previously explored the street, said he was blown away by the level of ‘wanton’ decay on display.

‘I’ve photographed many hundreds of abandoned places but never before have I seen something quite like Billionaires’ Row,’ he added.

‘The amount of wealth in that road is very obvious not just in the scale of the properties – maybe some of the largest houses I’ve ever seen, but also in their wanton neglect.

‘To have enough money to own a property like that and yet treat it as a throwaway folly is quite incredible… it does highlight a disparity against the lack of housing available to the poor in London, and I can’t help but agree.’

London’s ultra-exclusive ‘Billionaire’s Row’: How 66-house street near Hampstead Heath has been home to the world’s super-rich… while other mansions have stood derelict for years

The 66-house street Bishops Avenue has been home to some of the world’s most wealthy, including Heather Mills and Sir Billy Butlin – founder of the holiday camps.

Connecting the north-side of Hampstead Heath to East Finchley, the street lies on the boundary of the London boroughs Barnet and Haringey.

Bishops Avenue is considered one of the wealthiest streets in the world with each property occupying a two to three acre plot.

In 2008 Turkish tycoon Halls Toprak’s 30,000 sq ft mansion sold for £50million to the president of Kazakhstan and homes on the ultra-exclusive street sell for up to £65million. 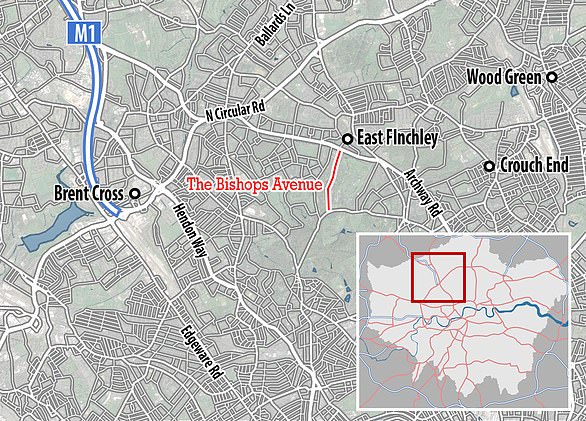 Connecting the north-side of Hampstead Heath to East Finchley, the street lies on the boundary of the London boroughs Barnet and Haringey 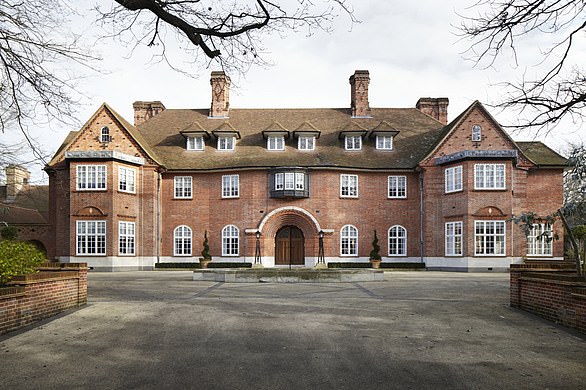 Famus faces who have lived on the street include Justin Bieber, who reportedly rented this 15-bedroom, £15million mansion for £108,000 a month in 2016

It was named after the Bishop of London Arthur Winnington-Ingram, who owned much of the surrounding area as a result of land grant in 1904, but most of the land was sold in the early 20th century and just one house and a residential home is now owned by the Church.

The largest mansion on the road, The Towers, was once owned by music hall actress Gracie Fields.

However after being bought by the Saudi royal family in 1989, demolished, and rebuilt as an L-shaped red-brick, the royals never came and the house is now rotten, overgrown and falling apart.

It was sold to Birch Ventures Limited in 2013, a shell company based on the tax haven of the Isle of Man, and has since become a target for squatters.

Some famous faces that have lived on Bishops Avenue include Richard Desmond, owner of Express Newspapers and Channel 5, Poju Zabludowicz, a billionaire art collector and philanthropist, and Justin Bieber, who reportedly rented a £15million mansion for £108,000 a month. 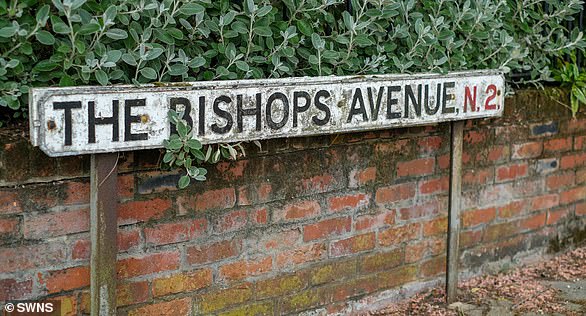 Bishops Avenue, also known as London’s Billionaires’ Row, is considered one of the wealthiest streets in the world 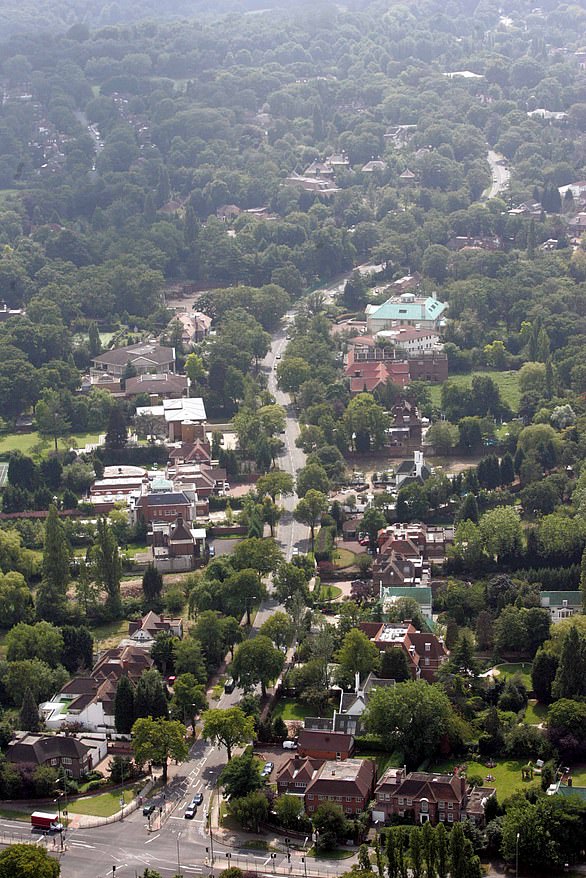 The 66-house street has been home to some of the world’s most wealthy, including Heather Mills and Sir Billy Butlin – founder of the holiday camps