AN Israeli boy, 5, who was the sole survivor of a deadly cable car crash that killed his entire family, has woken from a coma as loved ones were laid to rest.

Eitan Biran, who suffered injuries to his skull, chest, and abdomen, remains in a critical condition after the Mottarone tragedy, while his relatives were repatriated to Israel for their funerals. 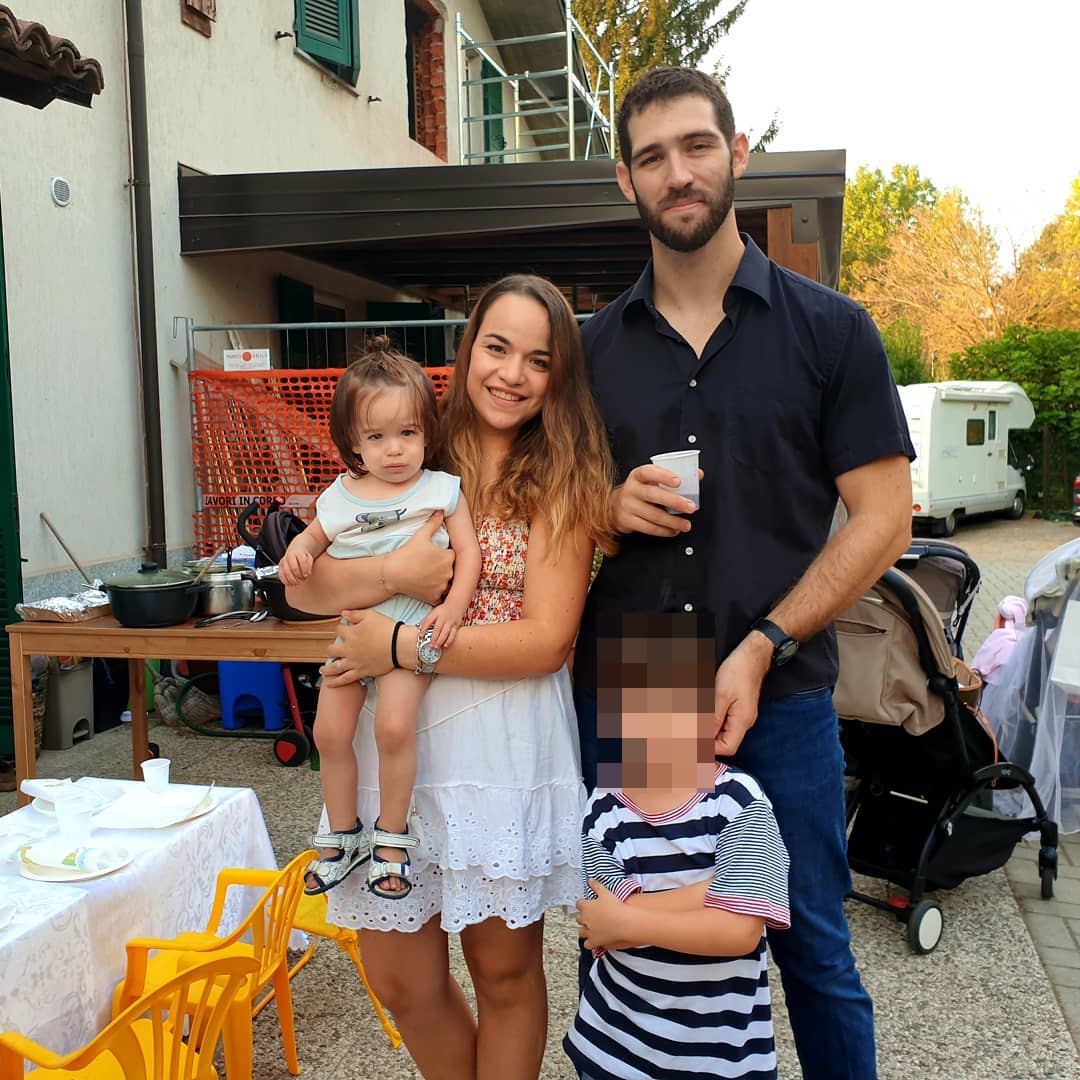 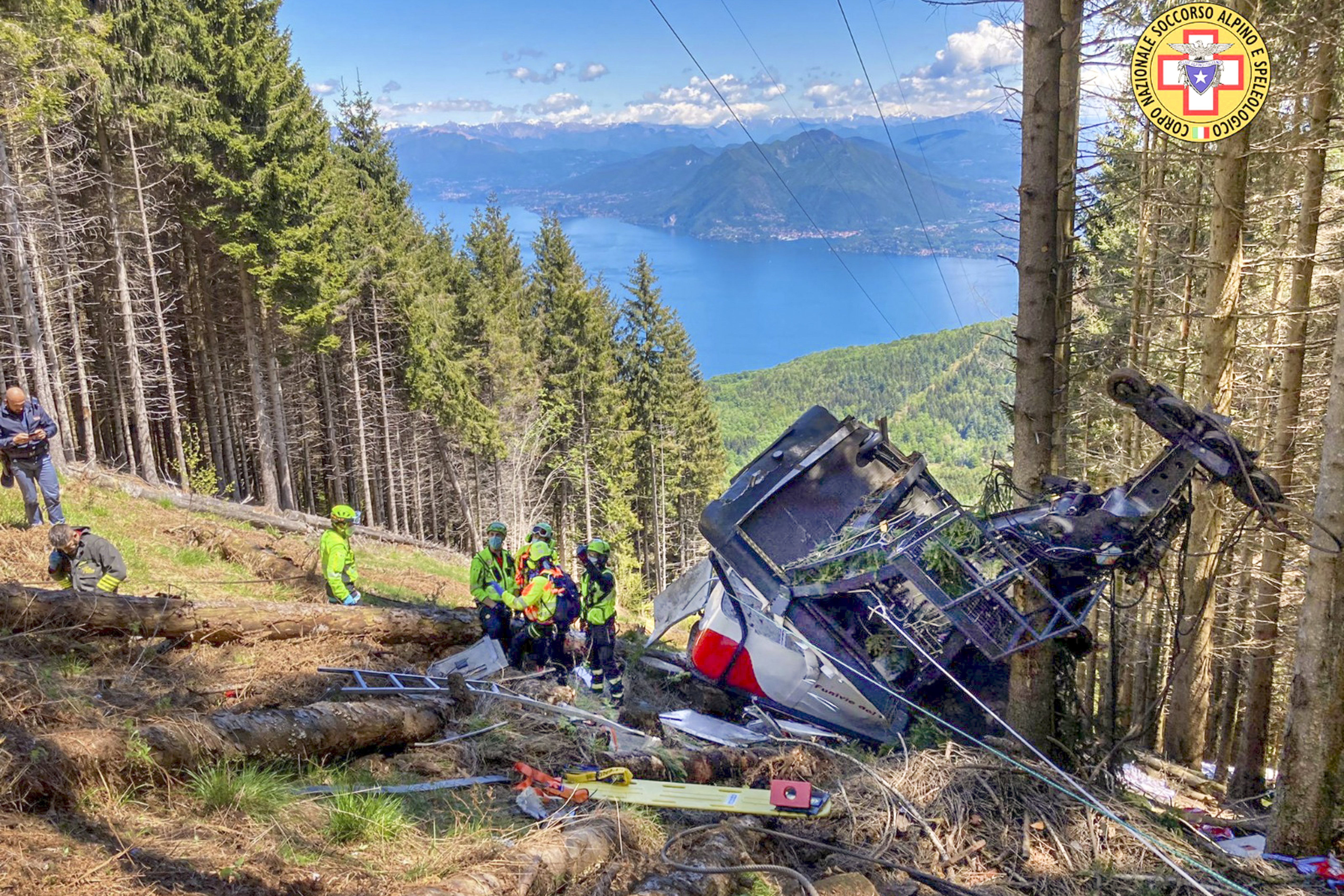 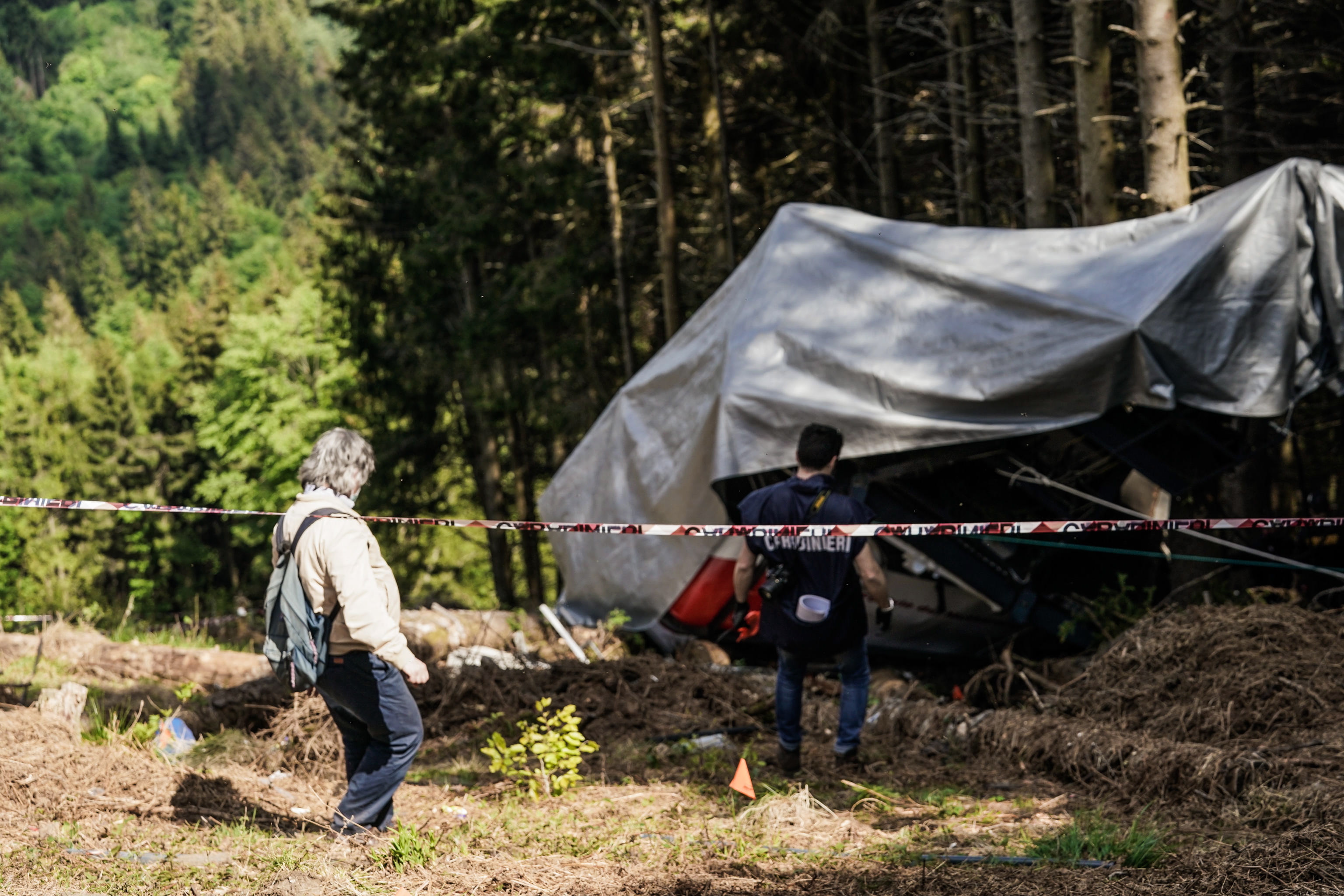 According to Corriere Della Sera the Mottarone crash, which killed 14 of the 15 people inside, occurred after the cable car reached up to 100mph causing it to catapult 54 metres on May 23.

Eitan's mum Tal Peleg, aged 27, died in the accident along with his father, Amit Biran, aged 30, and his younger brother, Tomer, aged just 2.

The Italian ambassador to Israel Gianluigi Benedetti was also at the ceremony.

"Eitan is now awake and conscious in the intensive care unit, speaking with his aunt and looking around," a spokesman for Turin’s Regina Margherita hospital said.

"From a clinical point of view, he is still in a critical condition due to his thoracic and abdominal trauma and the fractures to his limbs.

"In the next few days he will be taken out of intensive care and transferred to a hospital ward."

According to the Jerusalem Post, Eitan has undergone an MRI scan which showed there was no damage to his brain or spinal cord.

Tal's grandparents, Eitan's great grandparents, Yitzhak and Barbara Cohen, who also died in the crash will have their funeral today.

The Pope has sent his prayers for Eitan and the victims of the crash.

Father Gianluca Villa relayed the Pope's message during a congregation: "The Holy Father thinks with emotion of so many lives tragically broken … and sends his prayers to the victims and for little Eitan."

Mayor Marcella Severino likened the tragedy to America's 9/11: "'This is September 11 for Stresa."

Severino visited Eitan in hospital where his aunt, who works as a doctor, is preparing to give him the devastating news about his family. 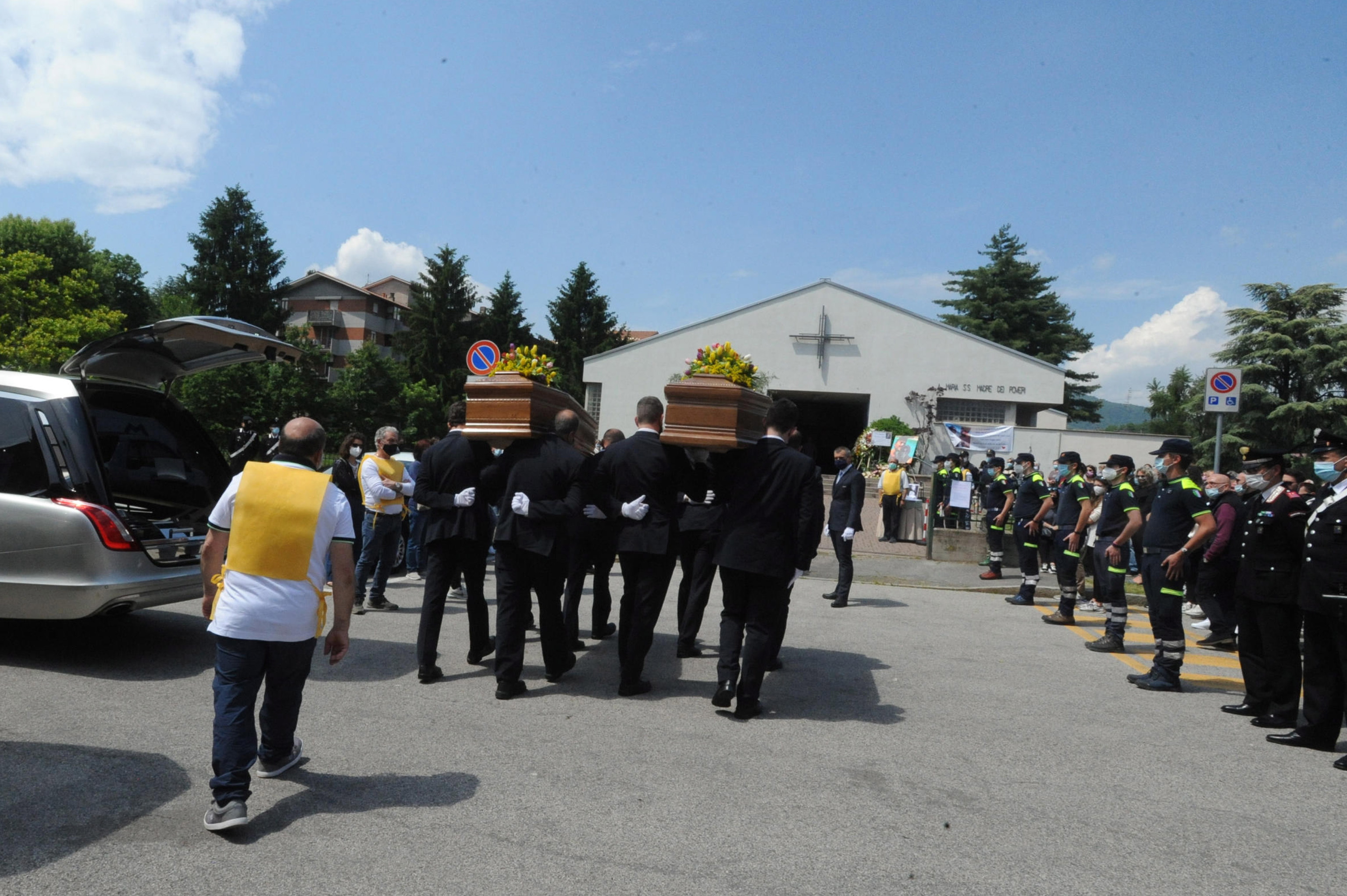 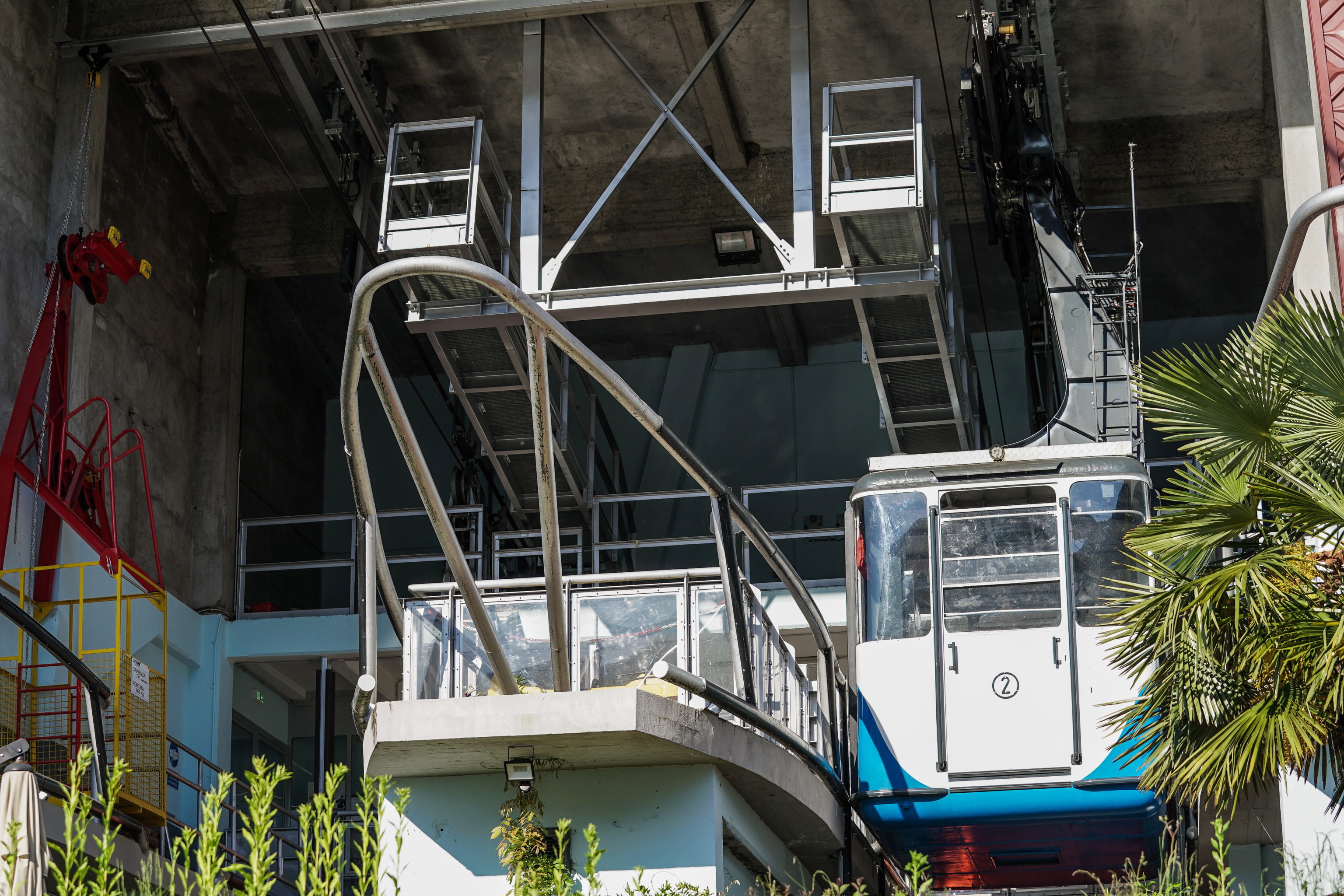 The young boy, who opened his eyes for the first time on Wednesday, reportedly asked "where's mummy", when he arrived at the hospital.

Doctors said his condition remains "delicate" after he suffered injuries to his skull, chest and abdomen as well as having various leg fractures.

Sources from the Regina Margherita hospital in Turin where the boy was treated, have since claimed a “last hug” from his father was the only thing that cushioned the impact of the crash at such a speed.

"Dad had a sturdy build, perhaps the last instinctive hug to protect him from death saved him," a source is quoted as saying in the Italian news outlet TGCOM24.

At the intimate funeral, "everyone pledged to take care of Eitan as his very affectionate parents did," the president of Comites Raphael Barki said.

Amit's brothers promised to remain close to their nephew and to hug him tightly at the family's farewell – just as his heroic father did in his final moments.

Eitan's aunt, Aya Biran, her father's sister, arrived at the hospital late on Sunday evening and asked for prayers to be said for her nephew.

She said: “I learned what had happened from the Whatsapp messages. I started receiving so many 'I'm sorry' and I didn't understand why.”

Mayor Severino told of her admiration of Aya, who works as a doctor in Italy, as she prepares to break the tragic news to her nephew. 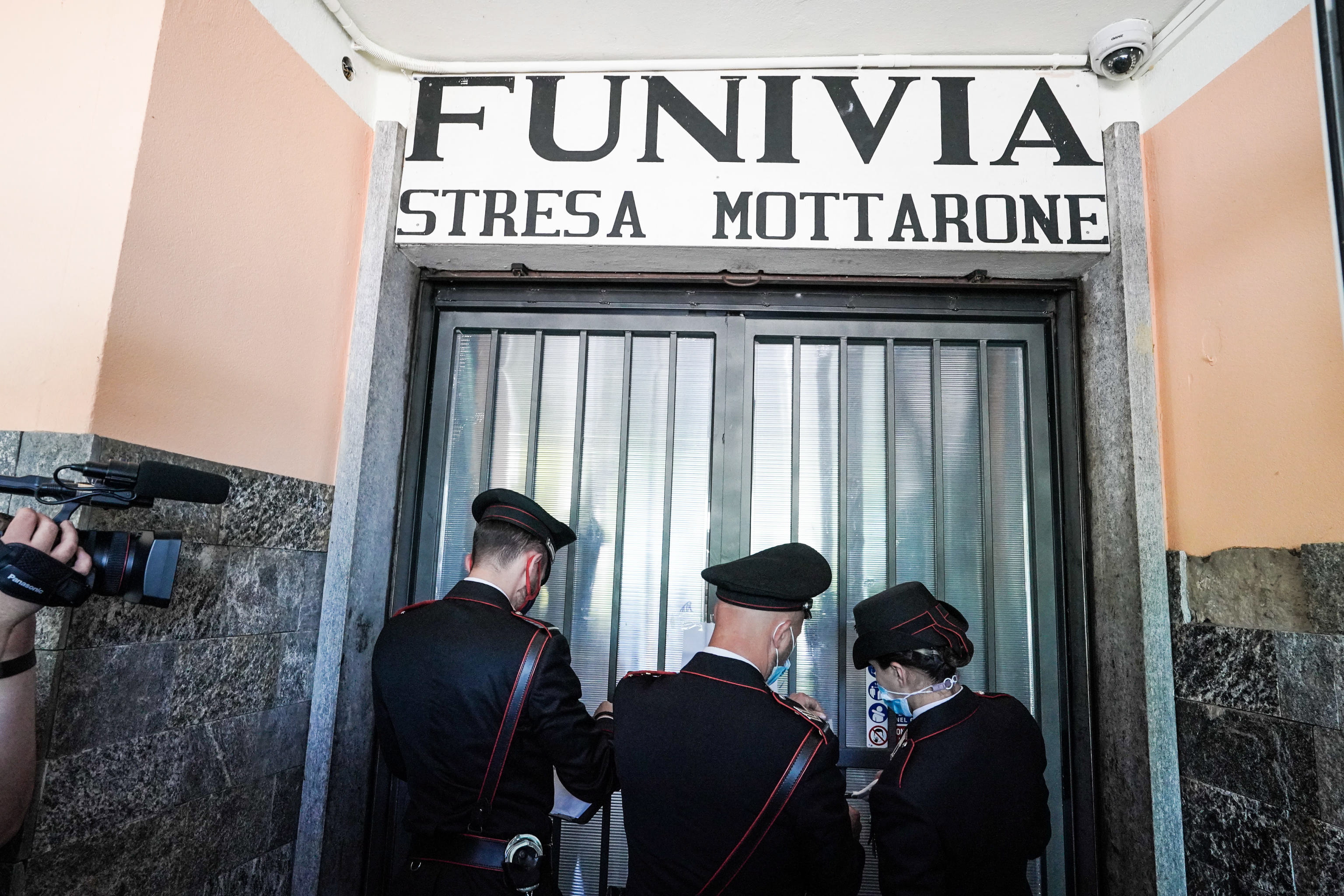 "She has great strength, which will serve her well by her nephew’s side. She’s a constant presence in the life of the child, he’s in good hands," Severino said.

Italian police have arrested three managers from the operator of the cable car who are accused of deliberately deactivating the break that could have stopped the car from flying backwards when the cable snapped, to avoid delays following a malfunction.

"It was not an occasional omission or forgetfulness. It was a conscious decision to disarm… to deactivate this emergency system in order to remedy what we have been told were problems, technical problems that were occurring on the line," she added.

The aerial tramway had "anomalies" since it resumed service on April 26 after lockdown, and "had been travelling in that way for several days and had made several trips," according to Bossi.

According to local reports, the cable car system had undergone major maintenance work between 2014 and 2016, and it was checked by specialist technicians in 2017 and last year.

The wires were allegedly not due to be replaced until 2029, according to the Jerusalem Post. 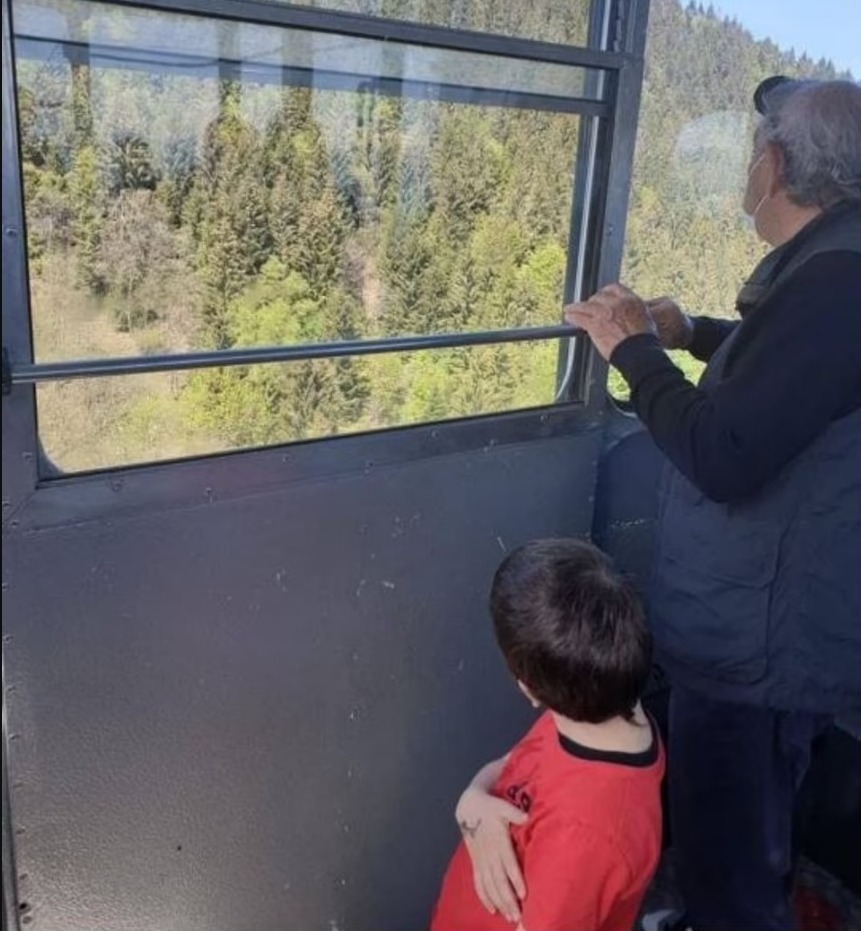 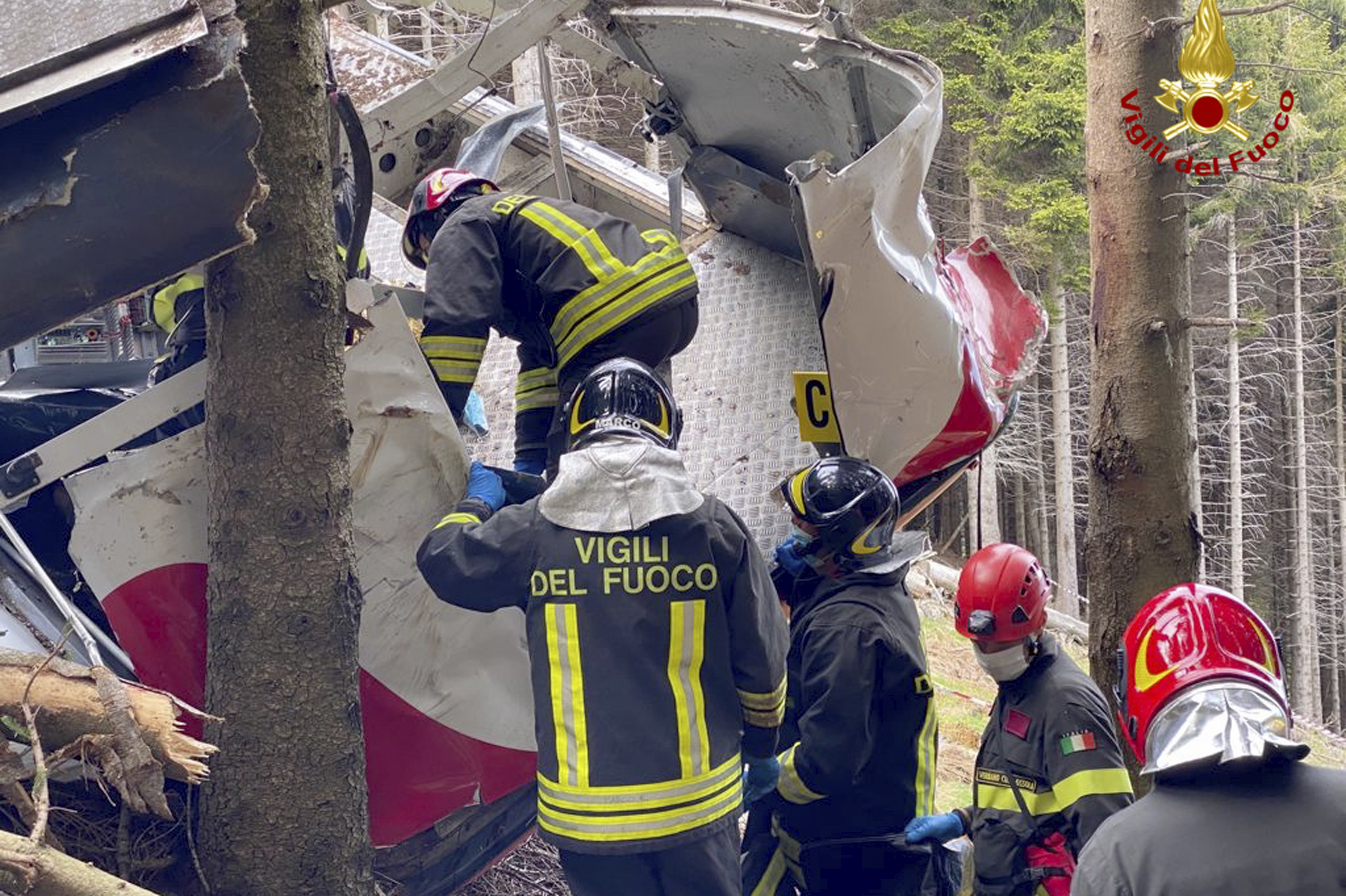 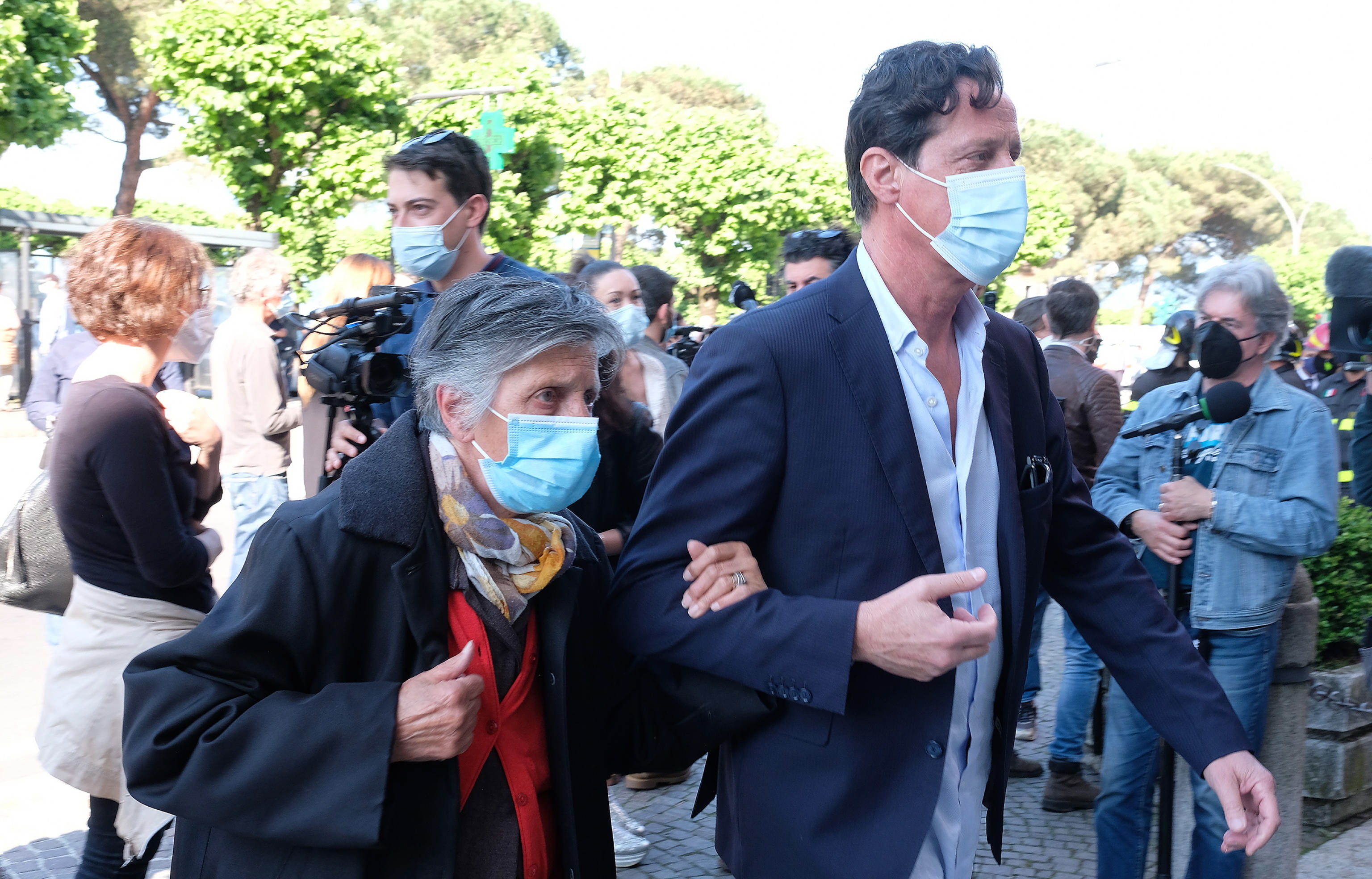 Italian news agencies named the three suspects as Luigi Nerini – the head of Ferrovie del Mottarone, the firm which manages the cable car – and two other managers, Gabriele Tadini and Enrico Perocchio.

"To avoid further interruptions in the service, they chose to leave in 'the fork', which prevents the emergency brake from working," said Cicognani.

He claimed all three men admitted what had happened.

The piece of equipment known as the fork had been inserted 'several times', said Bossi, which indicated it could have been unsafe for some time.

Eitan was born in Israel and had been living with his family in Pavia, Italy, for the past four years, where his father was completing a medicine degree.

His great-grandparents also perished in the accident, which took place around 1,000 feet from the summit of the Mount Mottarone, close to Lake Maggiore, on May 23.

The elderly couple lived in Israel and had travelled to Italy to visit their relatives after receiving their Covid-19 vaccinations.

Tragedy struck when a cable line snapped, causing the cabin to fall around 70 feet before tumbling down the mountain.

Mattia Zorlon, also aged 5, was rescued unconscious with trauma to the chest and skull and a double fracture to the legs.

He was revived and intubated but later succumbed to his injuries.

Mattia's parents also lost their lives in the accident of which Eitan is now the sole survivor.

A fundraiser for the youngster launched in wake of the tragedy has already raised tens of thousands of pounds.

His schoolmates and well-wishers have clamoured to offer the young boy comfort.

A teddy bear was left outside the hospital with the message: "Hi Eitan, you must make it. I’m leaving you my son’s stuffed animal to play and sleep with. I love you. A mom," the Jerusalem Post reported.

Witnesses to the disaster say they heard a “loud hiss” when the line snapped, the local mayor Marcella Severino has said.

She said the car went back down the line until it is believed to have hit a pylon before falling to the ground.

The crash marks Italy's first fatal cable car incident since 1998, when 20 people were killed after a low-flying US military jet cut a supporting cable at a ski resort. 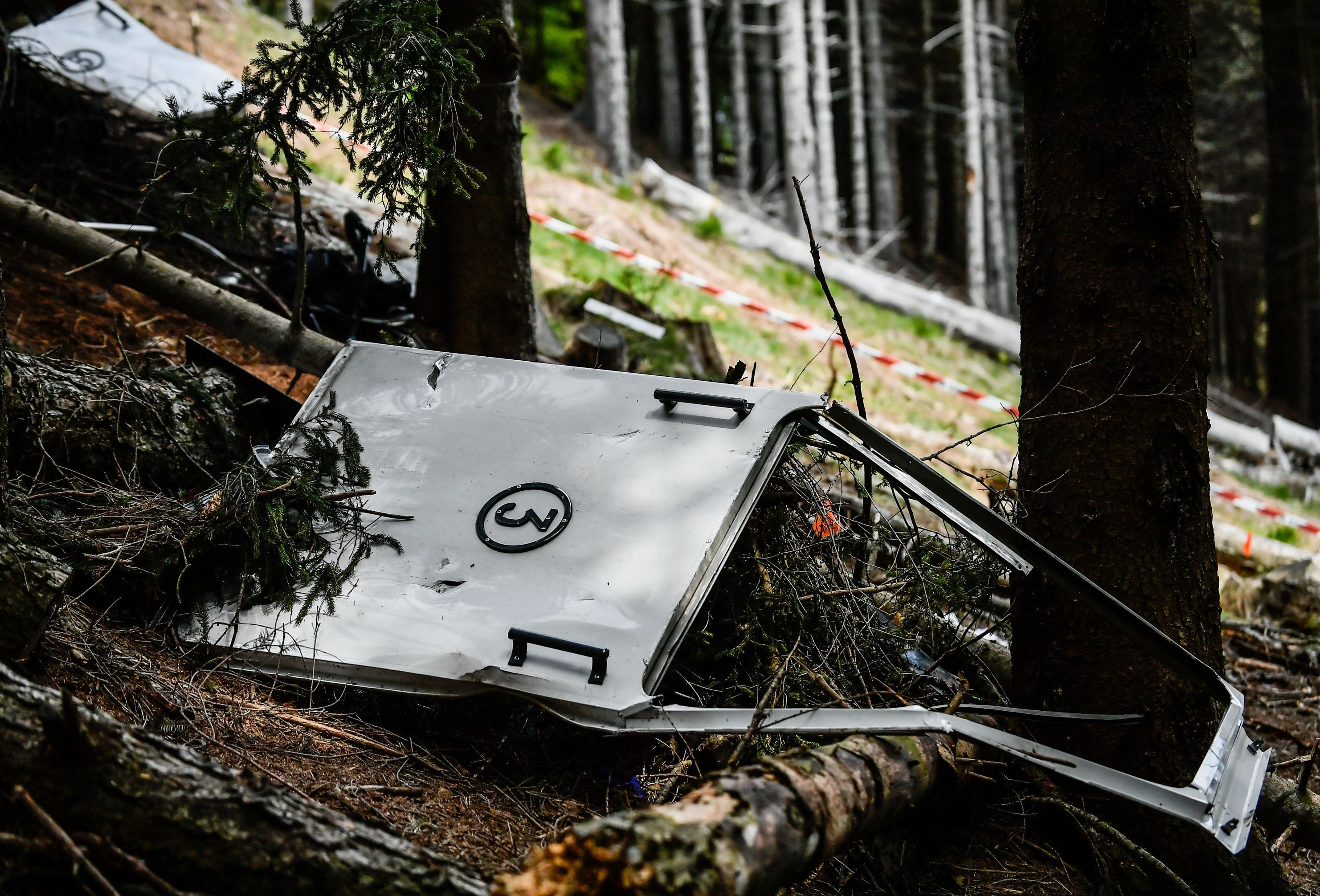 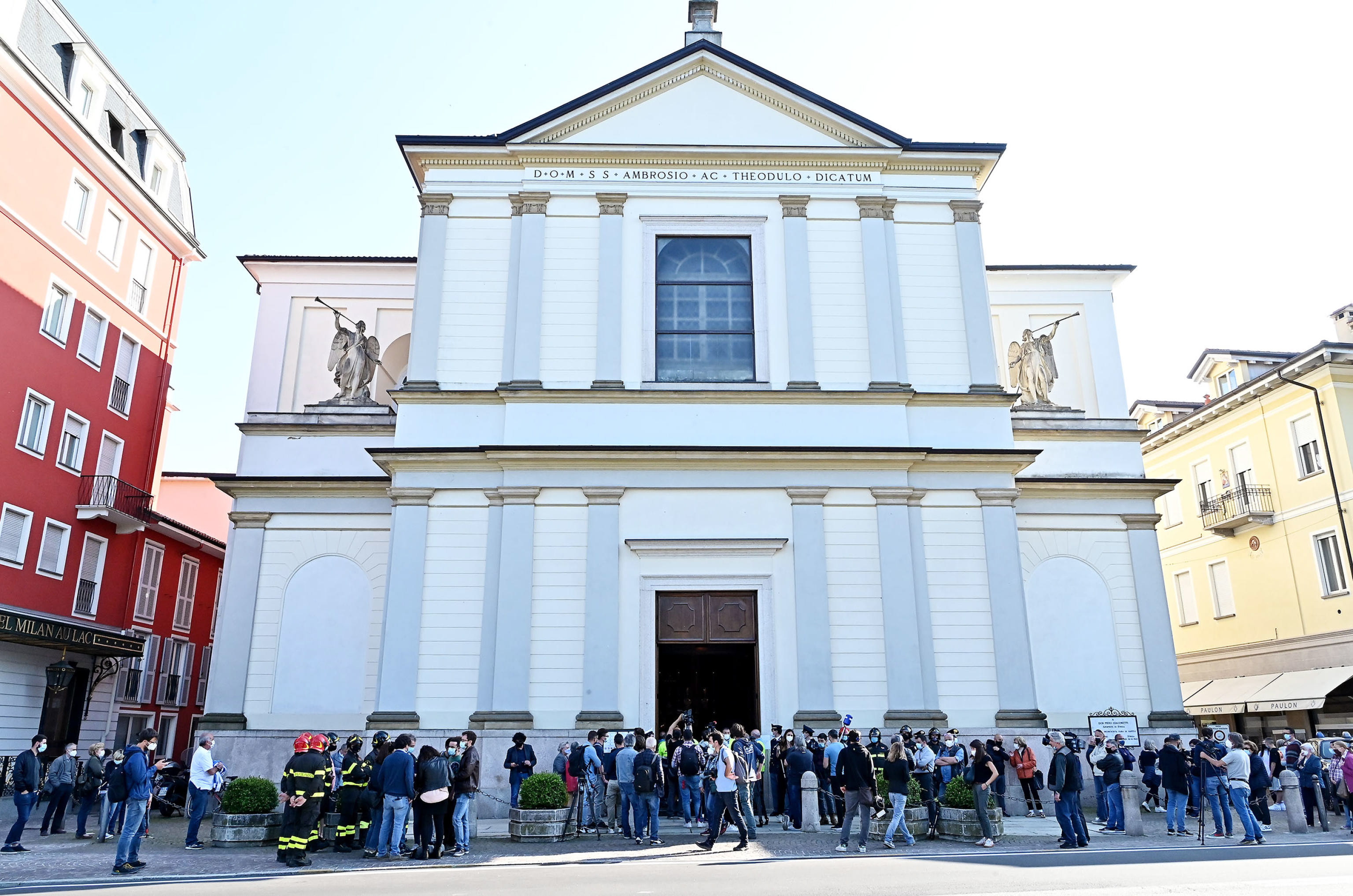