Kenny Logan sobbed in the arms of his television presenter wife Gabby in the aftermath of his shock prostate cancer diagnosis.

The former Scottish rugby international, 50, was told over the phone he had cancer on February 7 after a routine check up.

Gabby was in the room when he took the Zoom call, but was only half listening as she got ready for a meeting.

‘We were so not prepared,’ he told The Mirror. ‘But when we both heard those words… that I had prostate cancer, she stopped what she was doing, and we just looked at each other.

‘He said we have time to get it out of your system. But when you hear the word cancer, that’s all that registers, its terrifying. As soon as I turned off the Zoom call, I burst into tears. My wife and I held each other, and we cried.’

Kenny said the consultant reassured them both that he would not die. He caught the cancer before it had a chance to spread. 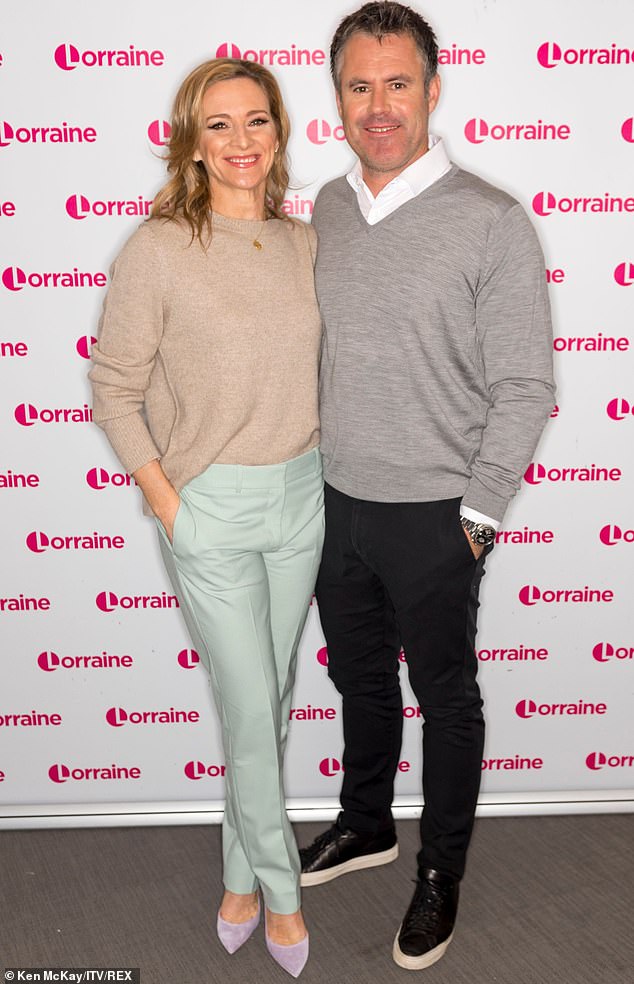 Logan hopes his diagnosis will fuel more open discussions in the community, noting men are particularly ‘notorious’ for suffering in silence and not scheduling regular check ups with doctors

He was prompted to have a male health MoT, which included a blood test, 18 months ago after Gabby started hormone replacement therapy to get on top of her own health.

That decision, he now says, saved his life.

‘Otherwise, I would have waited until I had a reason to see the doctor, and then it would have been too late,’ he said.

After revealing his diagnosis with the BBC on September 6, Kenny gave his first newspaper interview with the Daily Mail where he explained the testing process in detail.

The check in December 2020 included a test to assess his levels of prostate-specific antigen (PSA), a protein made in the prostate.

While PSA levels can rise for all sorts of reasons, including cycling, sex or an infection, persistently high levels can suggest prostate cancer. 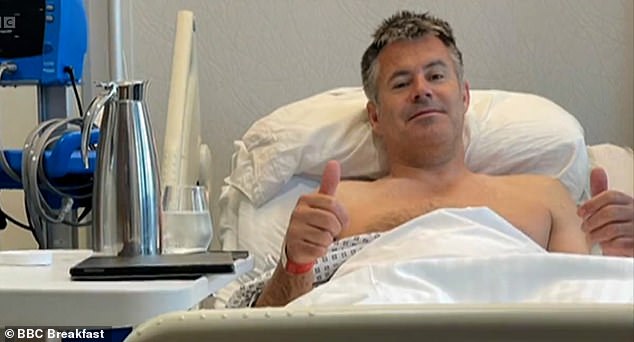 Kenny was given a digital rectal examination in which the doctor said it ‘felt fine’ but recommended seeing a urologist. He saw a specialist privately, who gave him another PSA, which again was 4.5ng/ml.

He was sent for an MRI scan, which revealed the prostate was ‘a little swollen’, but Kenny was assured he was ‘fine’ and would be monitored every six months.

His PSA levels had again risen at his next check up but it wasn’t until his third test, in January, that cancer was picked up.

The couple sat their 17-year-old twins Reuben and Lois down shortly after learning of the diagnosis themselves to break the news.

He was reminded of the day his own father died of pancreatic cancer when he was just 20, and wracked with fear over what was to come.

Kenny said the family ‘held one another and cried’ before Reuben said: ‘I need you around, Dad. You’ll smash this.’

The sentiment gave Kenny the confidence he needed to start asking serious questions about his treatment. 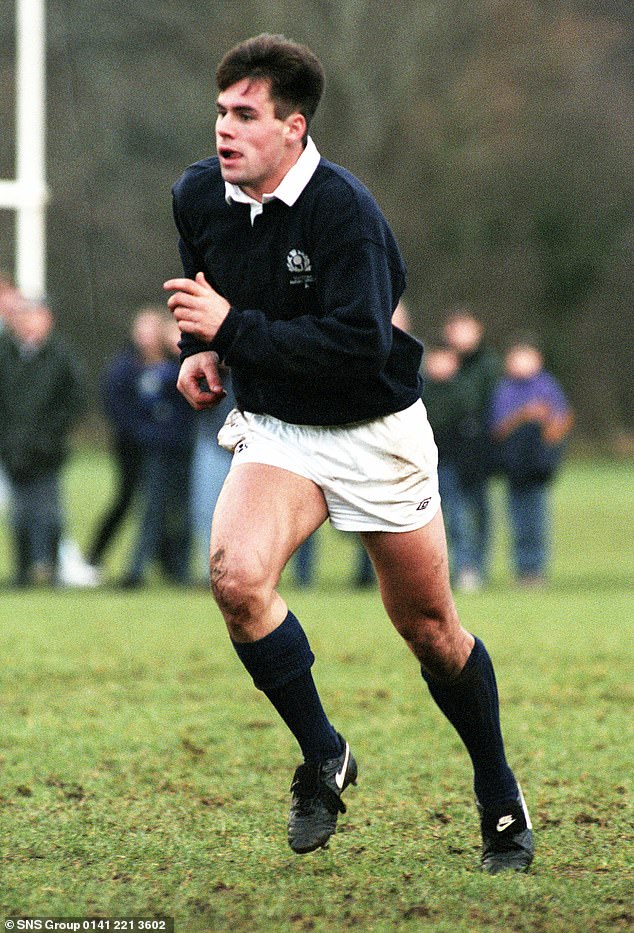 Kenny acknowledges that he was extremely ‘lucky’ his cancer was even spotted in the first place. Pictured during his days as a rugby international in 1993

The couple, who have been married 21 years, said Kenny was ‘extremely lucky’ they caught it early, which afforded him options regarding treatment.

He made the decision to remove the prostate entirely and is now three months post operation feeling almost as good as new.

‘I’m probably about 90 per cent back to normal,’ he said.

Gabby, 49,  also spoke about his tough journey back to good health, noting her husband appeared entirely fine right up until the day of the operation.

‘He did a bike session, he had no pain, no symptoms and to go in and have… a really invasive surgery,  it obviously takes a long time to recover from,’ she said.

‘You’re going to feel a lot worse off after it… but [we’re] very, very, very lucky.’

She was at his side when he came round from the three-hour operation.

He has been lucky to have minimal side-effects. ‘I knew there was a chance of urine leakage and had a few accidents,’ he said. ‘But all’s fine now. Gabby and I had also talked about the possibility of erectile dysfunction. But I’ve been very lucky on that front.’

Doctors confirmed there is no sign of cancer, which was the ‘biggest phew’ for the family.

‘It hit me hard when the surgeon said that if, instead of presenting early, I came to him some years on with symptoms, the cancer might have moved to my bones and I couldn’t have been cured,’ he said.

Kenny hopes his diagnosis will fuel more open discussions in the community, noting men are particularly ‘notorious’ for suffering in silence and not scheduling regular check ups with doctors.

Laura Kerby, CEO of Prostate Cancer UK, told MailOnline ‘by sharing his story, Kenny is reminding men of their risk, which is increased if, like Kenny, they are aged over 50, or black men over 45, or men who have a father or brother who has had prostate cancer.

‘We encourage those in these three ‘at risk’ groups to have a conversation with their GP. To find out more about your risk, or that of your partner, family member or friend, visit Prostate Cancer UK’s website and try out our 30 second online risk checker.’

Ms Kerby noticed the tragic death of Prostate Cancer UK ambassador Bill Turnbull last week, citing his own battle and openness in fighting the disease for a huge uptick in referrals and medical appointments.

‘The NHS called [it] the ‘Fry-Turnbull’ effect, so named as Stephen Fry also shared his diagnosis at a similar time. This led to prostate cancer becoming the most commonly diagnosed cancer in the UK for the first time in 2020, and undoubtedly saved thousands of lives,’ she said.

Prostate cancer can often be treated if caught early, but symptoms usually do not show up until the cancer is already in advanced states.

It is the most common cancer in men in the UK. The couple are encouraging men to learn more about the disease and consider talking to their GP about the risks.

Every year, upwards of 52,300 men are diagnosed with prostate cancer in the UK – more than 140 every day.

Up to 11,800 men in Britain die from prostate cancer annually, meaning it trails only lung and bowel cancer in yearly fatalities.

A family history of the disease can also increase the risk, but there was none in Kenny’s family.

WHAT IS PROSTATE CANCER?

How many people does it kill?

It means prostate cancer is behind only lung and bowel in terms of how many people it kills in Britain.

Despite this, it receives less than half the research funding of breast cancer and treatments for the disease are trailing at least a decade behind.

How many men are diagnosed annually?

Every year, upwards of 52,300 men are diagnosed with prostate cancer in the UK – more than 140 every day.

How quickly does it develop?

Prostate cancer usually develops slowly, so there may be no signs someone has it for many years, according to the NHS.

If the cancer is at an early stage and not causing symptoms, a policy of ‘watchful waiting’ or ‘active surveillance’ may be adopted.

Some patients can be cured if the disease is treated in the early stages.

But if it diagnosed at a later stage, when it has spread, then it becomes terminal and treatment revolves around relieving symptoms.

Thousands of men are put off seeking a diagnosis because of the known side effects from treatment, including erectile dysfunction.

Tests for prostate cancer are haphazard, with accurate tools only just beginning to emerge.

There is no national prostate screening programme as for years the tests have been too inaccurate.

Doctors struggle to distinguish between aggressive and less serious tumours, making it hard to decide on treatment.

Men over 50 are eligible for a ‘PSA’ blood test which gives doctors a rough idea of whether a patient is at risk.

But it is unreliable. Patients who get a positive result are usually given a biopsy which is also not foolproof.

Scientists are unsure as to what causes prostate cancer, but age, obesity and a lack of exercise are known risks.

Anyone with any concerns can speak to Prostate Cancer UK’s specialist nurses on 0800 074 8383 or visit prostatecanceruk.org