A fresh round of explosions rocked Kyiv less than an hour into 2023, after Russia had attacked Ukraine with missiles targeting the capital and other cities ahead of New Year’s Eve celebrations.

The first blasts of the new year began roughly 30 minutes after midnight, hitting two districts, Mayor Vitali Klitschko said on Telegram, adding there were no immediate reports of casualties.

Earlier in the evening, President Volodymyr Zelensky said Ukrainians would fight until victorious.

‘We fight and will continue to fight. For the sake of the main word: ‘victory’,’ he said in an address, as his country saw the old year out hours after the new wave of strikes. 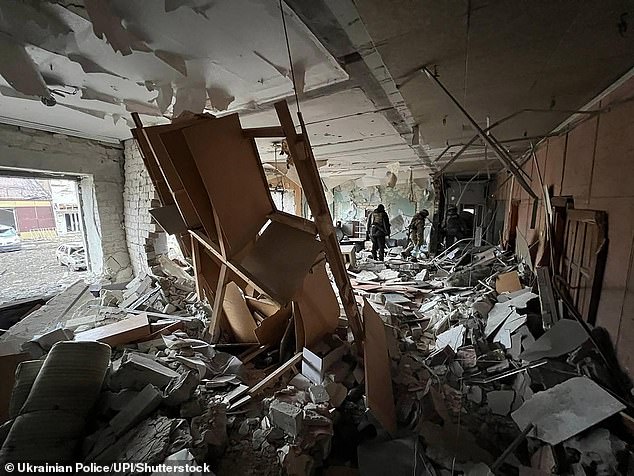 A fresh round of explosions rocked Kyiv less than an hour into 2023, after Russia had attacked Ukraine with missiles targeting the capital 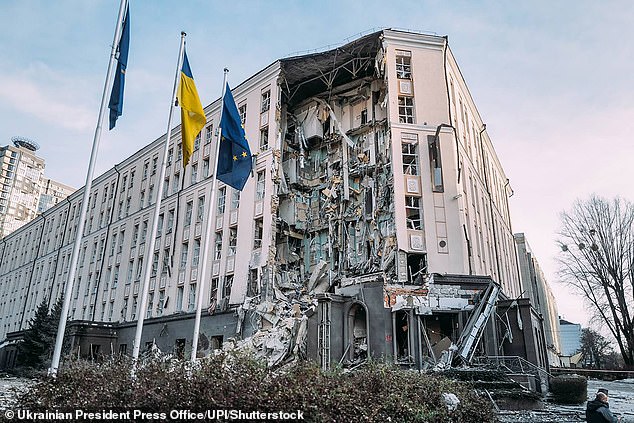 ‘I want to say to all of you: Ukrainians, you are incredible! See what we have done and what we are doing!’ Zelensky said in the emotional speech.

‘We fight as one team – the whole country, all our regions. I admire you all. I want to thank every invincible region of Ukraine,’ he continued.

As Russian regions in the Far East rang in 2023, Russian leader Vladimir Putin delivered his midnight address – usually set against the backdrop of the Kremlin – standing among servicemen and women who fought in Ukraine.

He told them that ‘historical rightness’ was on their side.

At around the same time, explosions shook the Ukrainian capital where AFP journalists heard at least 11 loud blasts in the early afternoon.

Klitschko said on social media that at least one person died as a result of the attacks on Saturday while city authorities said 22 others were injured.

One explosion tore open one corner of the four-star Hotel Alfavito in Kyiv, spilling rubble into the street, an AFP reporter saw.

Nearby sidewalks were covered in glass from blown-out windows in the area, including from Kyiv’s National Palace of Arts.

Filmmaker Yaroslav Mutenko, 23, lives in a nearby apartment complex and said he was in the shower preparing to go to a New Year’s Eve party when he heard a boom.

He said there had been similar explosions in the area during a previous attack in October, but nothing as loud as Saturday’s explosion.

As he watched rescue workers cordon off the street in front of the hotel, he told AFP he still planned to go to the party at a friend’s house. 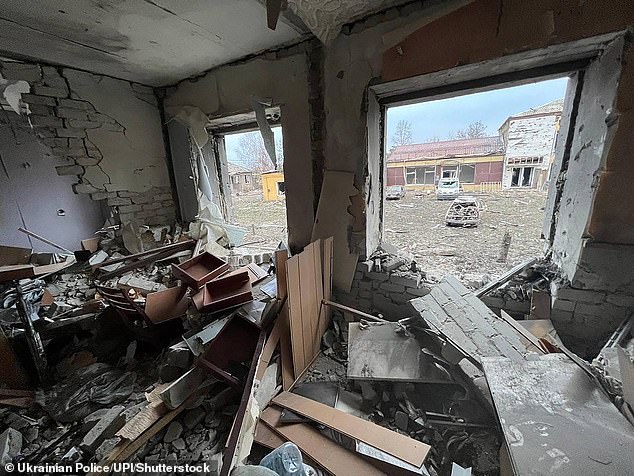 Mayor Vitali Klitschko said on Telegram, adding there were no immediate reports of casualties 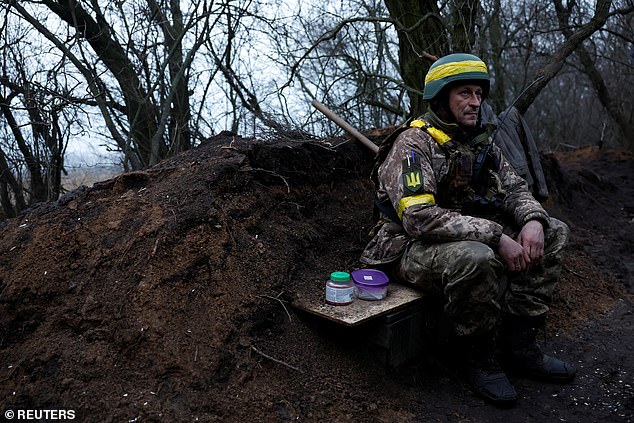 Ukrainian military soldier sits before preparing to fire a mortar round, as Russia’s attack on Ukraine continues, in region of Donetsk

‘Our enemies the Russians can destroy our calm but they cannot destroy our spirit,’ he said.

‘Why do I go celebrate with friends? Because this year I understand that it is important to have people near.’

The attacks come as Putin’s invasion of Ukraine enters its 11th month, with Russian strikes systematically targeting energy infrastructure, leaving millions in the cold and dark in the middle of winter.

Strikes were also reported in the southern city of Mykolaiv where a local official said seven people were injured.

Mykolaiv mayor Oleksandr Sienkievych had said earlier that a fire broke out in one of the city’s districts and several residential buildings sustained damage as a result of the strikes.

As Ukraine continues to rely on military support and aid from Europe and the US to repel Russia’s attacks, French president Emmanuel Macron promised Saturday to help Ukrainians ‘without fail… until victory.’

In Ukraine’s west, at least four people were wounded in the Khmelnytskyi region, governor Sergiy Gamaliy said, adding that part of the city of Khmelnytskyi was left without power.

According to Kremlin spokesman Dmitry Peskov, Putin delivered his New Year’s speech from the headquarters of Russia’s southern military district, where he was on a visit earlier on Saturday and presented awards to servicemen.

Among the recipients of the awards was Russia’s commander in Ukraine, General Sergei Surovikin, Russian news agencies said.

Footage released by Russian state TV showed Putin raising a glass of champagne with soldiers dressed in military uniform, some with awards pinned to their chest.

In his traditional New Year’s Eve address, broadcast by channels just before midnight, Putin told Russians that ‘moral, historical rightness is on our side’.

Putin said that this year was marked by ‘truly pivotal, fateful events’ which became ‘the frontier that lays the foundation for our common future, for our true independence’.

‘Today we are fighting for this, protecting our people in our own historical territories, in the new constituent entities of the Russian Federation,’ he added, referring to four Ukrainian regions that Russia claimed to have annexed.

Earlier in the day, Defence Minister Sergei Shoigu said in a message to his servicemen that Russia’s victory in Ukraine was ‘inevitable’.

The defence ministry also announced the capture of the village of Dorozhnyanka in the southern Zaporizhzhia region – a rare gain claimed as Russia suffered a string of defeats on the ground in Ukraine.

The ministry also said that 82 Russian servicemen were freed as part of a prisoner exchange with Ukraine, while Kyiv said that it returned 140 people.