LA County tells young girl she can have a state’s first ‘unicorn license’ with special conditions including ‘regular access to sunlight, moonbeams, and rainbows’ and ‘horn must be maintained to be in good health’

Los Angeles County officials have granted the first ever ‘permanent unicorn license’ to a young girl who asked if she could have permission to house the mythical animal.

A post shared to the County of Los Angeles Department of Animal Care and Control’s Facebook page shows a letter from young Madeline who asked local leaders for the license just in case she stumbles upon the horned-creature.

‘Dear LA County, I would like your approval if I can have a unicorn in my backyard if I can find one’ Madeline writes in the letter. ‘Please send me a letter in response.’

Not only did the Los Angeles Department of Animal Care and Control respond, they took it upon themselves to share Madeline’s request in a now viral post and provide her with a starter unicorn. 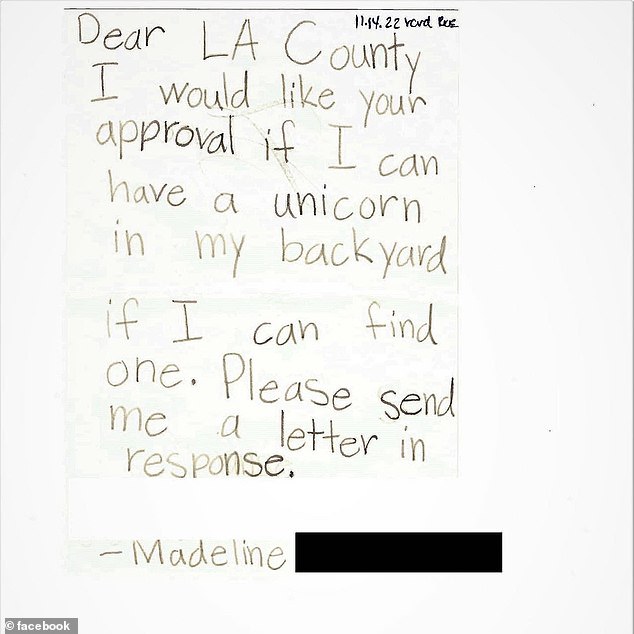 This is the letter sent by young LA resident Madeline, requesting permission to house a unicorn in her backyard should she be able to find one 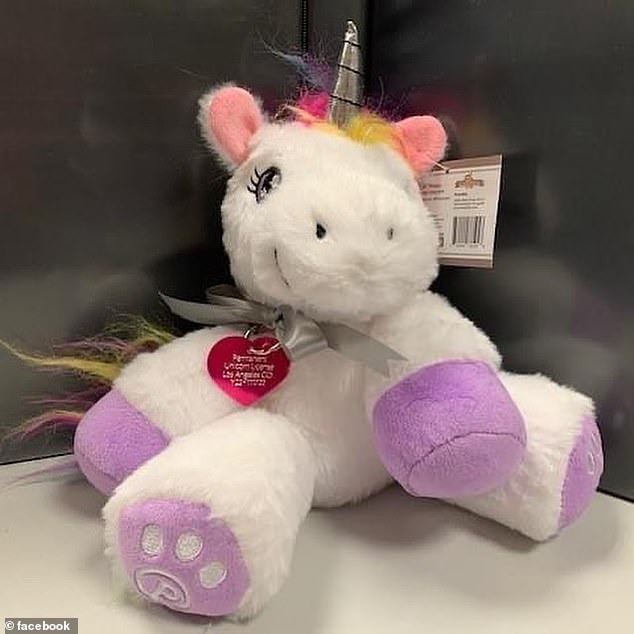 Acknowledging that the creatures are incredibly rare, LA County officials sent Madeline a starter unicorn in the meantime, complete with an engraved ‘permanent unicorn license’ tag

‘Madeline wrote us a letter requesting permission to have a unicorn in her backyard if she could find one. It is always rewarding to hear from young people who thoughtfully consider the requirements of providing a loving home to animals,’ the agency stated.

The organization said they commend her sensibility in requesting the permit and her commitment to being a responsible pet owner in the area.

‘We commend Madeline’s sense of responsible pet ownership to seek permission in advance to keep a unicorn in Los Angeles County,’ the agency stated.

‘As a result, we issued her a preapproved unicorn license. Also, in the meantime, because they are indeed very rare to find, we will be providing her the unicorn pictured below as she continues her search.’

In a letter to Madeline, Marcia Mayeda, director of Animal Care and Control in L.A. County, also gave the young girl a list of requirements that must be upheld in order to keep the permit valid.

Madeline must ensure ‘the unicorn is given regular access to sunlight, moonbeams, and rainbows,’ and ‘fed one of its favorite treats — watermelon — at least once a week,’ according to Mayeda. 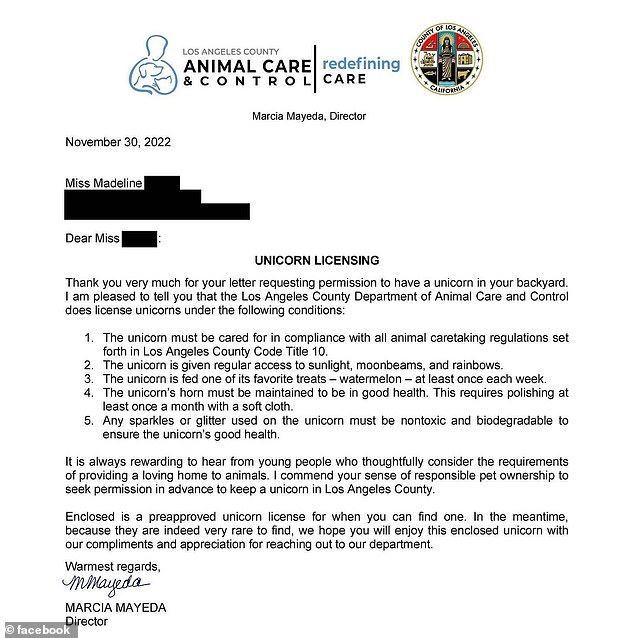 The Los Angeles Department of Animal Care and Control sent this letter back to Madeline, telling her the criteria she must follow should she find a unicorn to keep as a pet 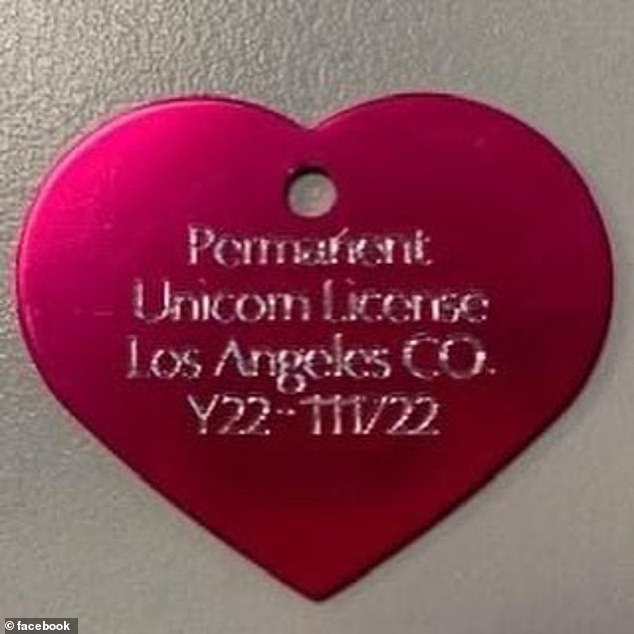 Of course, the creature’s shining feature, it’s horn, must also be ‘maintained in good health’ which required ‘polishing at least once a month with a soft cloth.’

Lastly, should Madeline use sparkles or glitter on the unicorn, they must be ‘nontoxic and biodegradable to ensure the unicorn’s good health.’

DailyMail.com reached out to the Mayeda and the Los Angeles Department of Animal Care and Control in hopes of speaking with Madeline and her mother, but did not receive a response by the time of publication.

Mayeda did however speak with the New York Times and told the outlet that Madeline’s parents have not told her about the approval just yet. 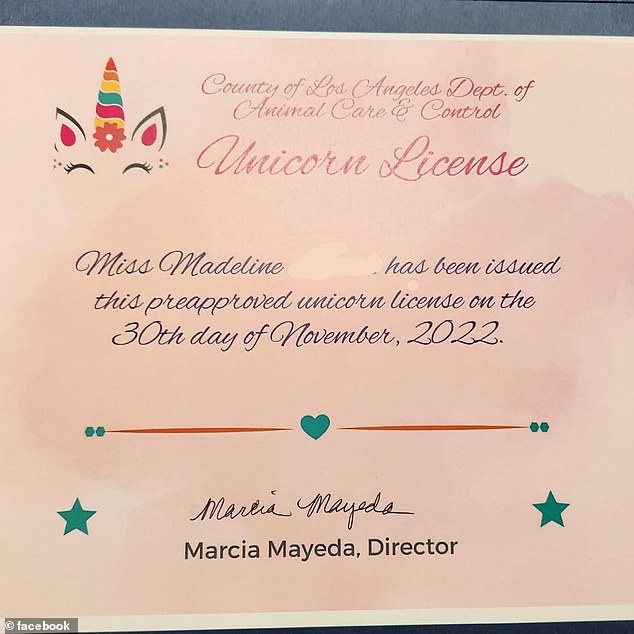 In addition to the engraved tag and stuffed animal, the animal care and control officials sent Madeline her very own certificate showing she has obtained permission to keep a unicorn 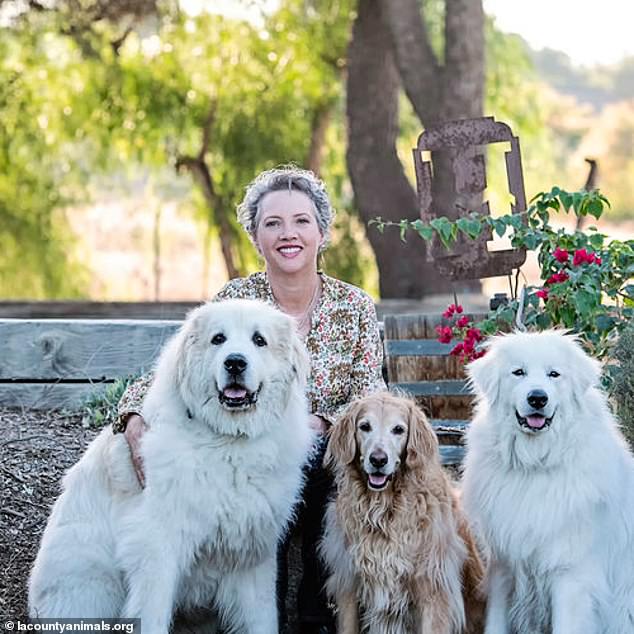 Marcia Mayeda, director for the Los Angeles Department of Animal Care and Control said the letter from Madeline warmed the hearts of everyone who works for the agency

Madeline’s mom told Mayeda that the young girl’s birthday is coming up later this month and they plan to give the license and the stuffed animal to her as a present.

The girl’s mom also told the LA Department of Animal Care and Control official that she did not want to discourage her daughter when she asked for a unicorn and told her that it may require special permission. That didn’t stop Madeline, apparently.

‘Madeline said, “OK,” and she marched off and an hour later she came back and said, “Will you help me mail this?”‘ Mayeda told the New York Times.

‘It just made everybody’s day at our offices when we got that,’ Mayeda said of the letter. ‘It was just the cutest thing.’

The story reached individuals around the world, including Austria, Australia, and Germany 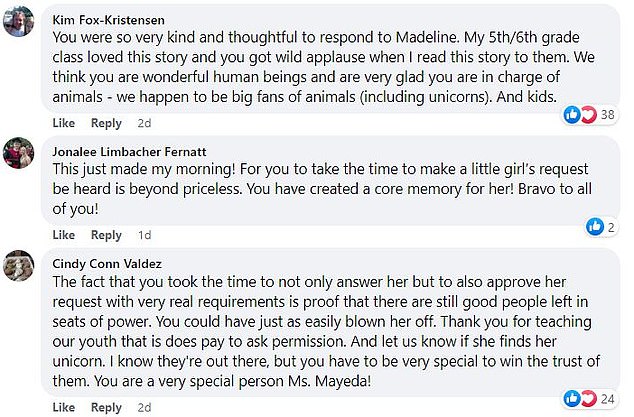 The post made by the Los Angeles Department of Animal Care and Control quickly caught the eyes of those not only around the area or the state but the world, too.

‘I love this. I am happy to see that we can take a few minutes out of our busy day to make a child’s dream come true,’ wrote one person in a comment.

‘This cute story reached the news in Austria. Very heartwarming in hard times,’ said one person who lists their location as Linz, Austria.

‘This is amazing.. and has reached all the way to New South Wales, Australia. Very sweet,’ said another commenter.