Perth Airport is preparing for its busiest day in two years as thousands of international and domestic passengers plan to enter Western Australia on its expected border opening date, February 5.

It’s the last major airport in Australia to open its doors freely to overseas and interstate passengers since strict travel restrictions were enforced as the state government tried to keep WA free from COVID-19.

Perth Airport chief executive Kevin Brown said he was expecting about four to five international flights on February 5 and 6, which would equate to about 2000 overseas arrivals. 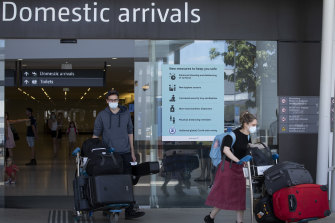 WA’s borders will open on February 5, with an influx of thousands of interstate and overseas arrivals predicted.Credit:Getty Images

“Domestically, we’ve got about 42 flights coming in on February 5 so that might be seven or 8000 people coming in,” he told 6PR’s Gareth Parker on Monday.

“We’re very keen to do everything we can and we’ll make sure that’s safe and secure for Western Australians getting home again.”

Mr Brown said while the airport wouldn’t be as busy as pre-COVID days, it would be its busiest in recent years.

Mr Brown said the influx of arrivals from February 5 wouldn’t pose any more issues than the airport had been dealing with for the last two years.

While Perth Airport had been closed for the past 12 months, it continued to cater to about 6 million miners coming and going, Mr Brown said.

“We’ve managed that safely and securely throughout,” he said.

“We don’t have a problem with it but certainly it wouldn’t be the volume of traffic that we would have had pre-COVID where we had about 350 flights a day typically.” 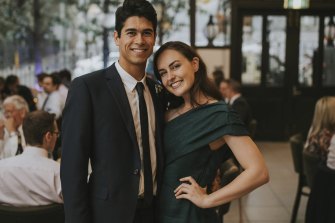 Melbourne nurse Sarah McDonald is hoping to fly into Perth to see fiance Ezra Holt and start working in a Perth hospital when the border opens.Credit:Facebook

Mr Brown said there will continue to be a police presence on site checking vaccine documents and ensuring people were scanning in on the ServiceWA app.

“Relative to what we’ve been through, that should not be major hindrance for people,” he said.

“There’ll also be a number of additional checks for people from the international arena which colleagues and Australian Border Force will be administering.

“All I’d ask our passengers is to continue to be a bit patient with the process to make sure we get everybody through safely and securely.

“We’ve been working very closely with the state government and the federal government in terms of the protocols to make sure that we’re doing everything as reasonably practicable to make sure this is a safe journey for people in and out of the state.”

Mr Brown said understandably there had been widespread anxiety around when the border opens, especially for people who haven’t seen their family and loved ones in a long time, but that was what the airport had been readying itself for the past two years.

“As people see the reopening and see how it’s playing out, we’ll get more comfortable and less anxious as time goes on as we return to some resemblance of normality,” he said. 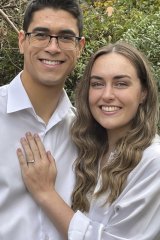 Newly engaged Ezra Holt and Sarah McDonald are looking forward to being back in each other’s arms on February 5.

Melbourne nurse Sarah McDonald, 24, said the wait to be reunited with her fiance, Nine News Perth reporter, Ezra Holt, 24, had been riddled with anxiety and that she didn’t want to get her hopes up in case her February 5 arrival in WA for some reason didn’t go ahead.

“I’m moving my life to Perth to be with Ezra but at the moment it feels very surreal because we’ve been stuck in our respective cities and not been able to see each other in person for almost seven months,” she said.

“We both work rotating rosters and had to schedule annual leave weekends when we initially thought we were able to get over and back to each other but none of them ever worked out.

“It’s been pretty tough and pretty challenging but we’re really looking forward to the opening date, but we’re not holding too tightly to it just in case it doesn’t happen.”

Ms McDonald, who booked her flight to Perth the moment the border announcement was made, said the challenges around getting reunited with her future husband was exacerbated by working in an understaffed hospital in Melbourne’s COVID climate.

“It’s been the toughest working in hospitals where we’re constantly being short staffed,” she said.

“The healthcare system is obviously in crisis as everyone knows and we’re working with very little staff or burnt out staff.

“I have a job lined up at a Perth hospital and it will be good to bring some of those skills having worked in a COVID climate for two years to another workforce that apparently needs lots of nurses.”

The young wife to be said the whole situation had tested her mental health, with the last two years being some of the toughest in her life, so to be back in the arms of her fiance felt like a distant dream.

“It’s going to be a big relief on the day to finally see each other – I’m sure there’ll be lots of tears shed,” she said.

“It feels very surreal and because we’ve had to accommodate for changing plans I guess that mentality of holding loosely to future prospects and plans is something I’ll carry with me – whether that’s distrust or flexibility, I’m not sure.”