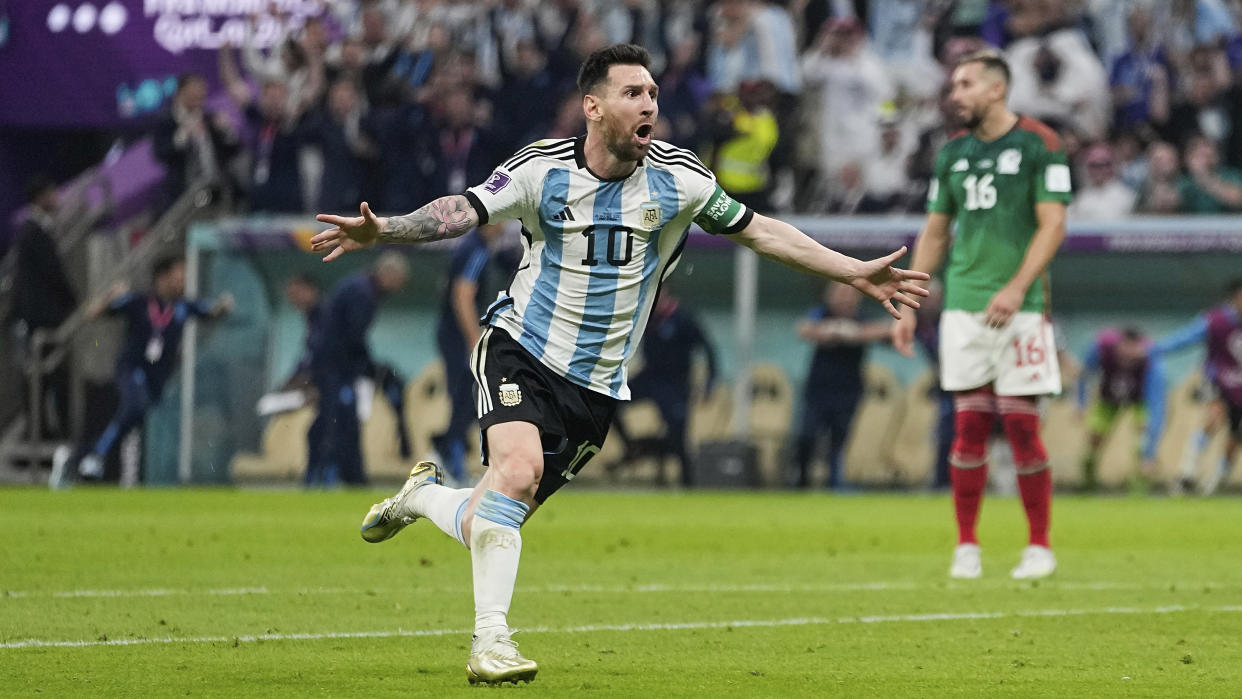 LUSAIL, Qatar — Lionel Messi strode into the cauldron at 9:53 p.m., and stared up into the eye of the Lusail Stadium storm. It had been brewing for hours and days with Argentina here on the brink of World Cup elimination. It pelted him for an hour as Messi and teammates seemed paralyzed by pressure and Mexican noise. And then, after 63 minutes of dreadful soccer, he emerged from a crowded midfield to lift his nation out of impending despair.

Mexico did everything to stop him. Messi, nonetheless, pelted a pinpoint left-footed shot past Guillermo Ochoa to break a deadlock and lift Argentina in a massive, crisis-averting 2-0 win.

His goal sent tens of thousands of Argentine fans here into raptures, and some into tears. It sent his team into second place in Group C, having recovered from Saudi Arabia’s shock four days earlier. It sent his teammates flying toward the far corner flag, where he’d sprinted away to celebrate. It sent one, Lisandro Martinez, collapsing to his knees, perhaps to thank a divine being, perhaps in overwhelming relief.

They later bowed to him as if he were a god. When Enzo Fernandez doubled the lead and clinched the victory, some whipped off their shirts and twirled them in the air. At the final whistle, teammates sought out Messi and enveloped him in one grand, grateful group hug.

They — Argentina, the team, the nation, the international brand, the aura — had come to Qatar expecting a lengthy stay. They came as joint favorites, as South American champions, as Finalissima winners. They arrived on a 36-game unbeaten streak that spanned multiple showdowns with Brazil. And they came, buoyed by their 2021 Copa America triumph, without the unbearable pressure that had haunted Messi at previous tournaments.

And they started with ease, waltzing through Saudi Arabia at will for a half-hour. Then the nightmare began. The two Saudi goals. The near misses. The frustration. The reverberations around the globe. The horror. 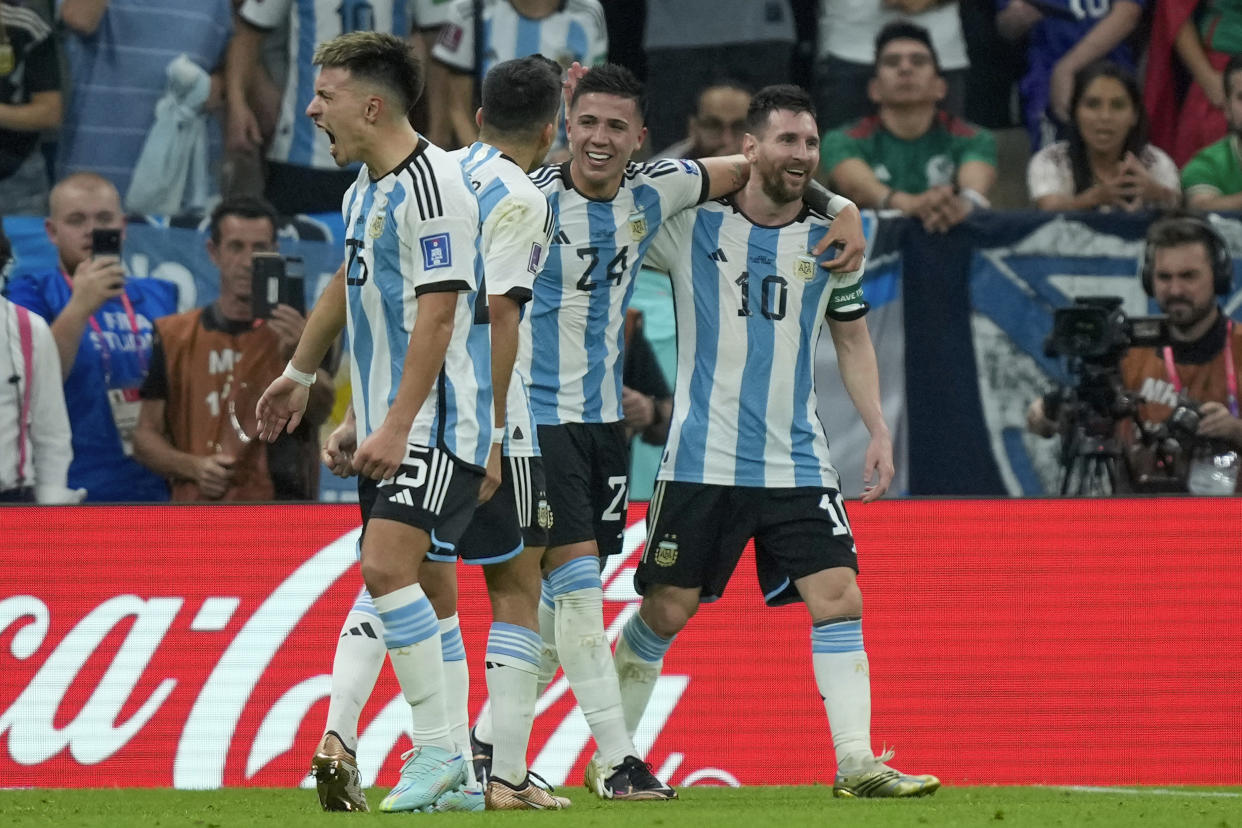 They regrouped with family at their Qatar University base in Doha. They came to Lusail on Saturday night with stoic faces and the occasional grin. But when they emerged onto the field for warmups, 40 minutes prior to kickoff, the impossible size of the occasion surely struck them.

The tens of thousands of Argentines were already there to greet them. Very few actually required seats. They stood, and bounded, and pulsed their arms, and sang song after vociferous song. Some had started hours before kickoff. They grew in numbers and volume. They roared an ear-splitting roar when Messi’s photo appeared on the big screens and his name boomed out over loudspeakers.

And the Mexican fans matched them, word for word of song, ounce for ounce of passion, decibel for decibel.

And the Mexican team, itself under pressure, rose to the occasion.

Mexico coach Tata Martino made lineup changes and sent out a striker-less 5-3-2, with double false-9s. It aggravated Argentina. But more than anything, the South American favorites seemed paralyzed by the occasion, by a combination of the stakes and the constant din that completely overpowered even the referee’s whistle. They looked nervous. They played clumsily. In the opening exchanges, they offered nothing in the way of incisive movements or threat.

They seemed terrified of the mere possibility that any Mexican crusade into the attacking half, or even a minor mistake, could end their World Cup. They got sucked into playing an extraordinarily ugly first half. Mexico had made it ugly by design; and Argentina by accident. There were 16 fouls and zero shots on target from open play. The repulsiveness silenced many of the Argentine fans, who for so long had been so intent on making a racket.

But it emboldened the Mexican fans. Because they knew that a draw with the erstwhile Group C favorite would have suited them just fine.

Argentina, though, perked up when Messi won and stood over a free kick in a central area 25 yards out. He floated it over the bar, but their possession over the first 15 minutes of the second half, suddenly felt patient and potent rather than stagnant.

Soon thereafter is when Messi stepped up. More than 80,000 people rose as one, and exclaimed. Tension broke and became ecstasy.

With four minutes remaining and tension returning, as Argentina tried to see out the win, Fernandez juked into the box and curled a beauty past Ochoa.

Enzo Fernández with a BEAUTY pic.twitter.com/XMACd77tNv

His goal put Argentina firmly into second place on goal differential, tied with Saudi Arabia on three points and behind Poland on four. The scenarios for the final day are complex. But one is simple: Argentina will advance and almost surely top the group with a win.

The four-day nightmare, it seems, is over.