The state of play as counting resumes

We’ve just had a small update to vote counts from the Victorian Electoral Commission this morning, suggesting the electorates of Caulfield and Croydon will stay with their Liberal incumbents.

Senior Liberal David Southwick may have been able to fend off a strong challenge from Labor’s Lior Harel in Caulfield to retain the seat he’s held since 2010.

The seats we believe are still too close to call are Bass, Benambra, Hastings, Hawthorn, Mornington, Morwell, Northcote, Preston and Shepparton.

We also have the electorate of Narracan listed as too soon to call, but it is considered a ‘failed election’ due to the death of a candidate, and a supplementary election will be held.

Hawthorn Liberal Pesutto pulls ahead of teal in Hawthorn

Liberal John Pesutto has edged ahead of teal candidate Melissa Lowe in the ultra-marginal seat of Hawthorn, as the counting of postal votes put him 383 votes ahead, with 71 per cent of the vote counted.

Pesutto, who has campaigned for a year to regain the seat after a shock loss in 2018, was with supporters on Saturday night at the Glenferrie Hotel. The former MP declined to talk to The Age, saying he wanted to see more votes come in before discussing what had happened in the seat. 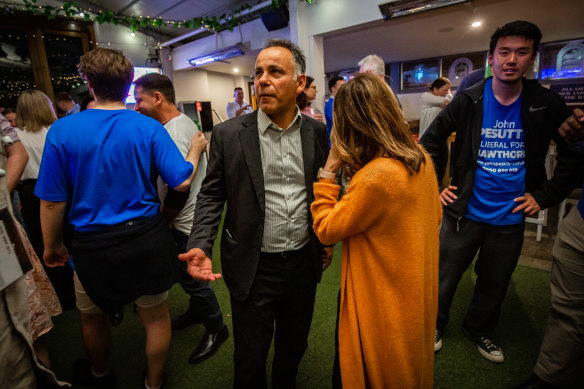 As the results stood at 1am last night, the seat of Hawthorn remained too close to call, with a 0.78 per cent swing to Pesutto.

The 52-year-old has long been touted as a future leader of the state Liberal Party and, if he does manage to take back the seat, would be in contention to take over from Matthew Guy after his second loss as opposition leader on Saturday night.

Pesutto has consistently said he would like to take a leadership role in some form should he win back Hawthorn, which he held from 2014 to 2018.

This morning’s key points at a glance

Good morning and welcome to our coverage of the wash-up from the Victorian election. Thanks so much for joining us.