The “star witness” in the ABC’s documentary and podcast on murdered journalist Juanita Nielsen demanded that the program makers not ask him crucial questions, including about his criminal record.

The program makers not only agreed to that condition, they also agreed not to ask John Innes in detail about an elaborate “cover story” which he claimed put him right in the middle of the Nielsen investigation in the early 1980s.

Juanita Nielsen in October 1974. She disappeared on July 4, 1975 and was a newspaper publisher, journalist and activist, and heiress of the Mark Foy family.Credit:Nigel Scot

The extraordinary demands made by Innes, which were acquiesced to, meant he was not asked vital questions that would have tested his credibility.

It is not clear whether the national broadcaster knew he had made such demands as a condition of being interviewed or whether they had been agreed to in writing, in a release deed, by the company involved with the ABC in producing the series, WildBear Entertainment.

But an ABC spokesman conceded the conditions were “highly unusual” and the broadcaster would not accept them again.

Innes’ claims were aired on television, in an accompanying podcast and in online articles. The ABC recently removed the TV program and two episodes of the podcast after serious doubts were raised about the veracity of Innes’ story.

Innes told the program that in 1982 he was approached by NSW Police investigating the disappearance of Juanita Nielsen. After “months” of planning with one of the investigating detectives, Karl Arkins, he had gone “undercover” into Long Bay jail in a bid to get information from one of the suspects, Kings Cross bar manager, Eddie Trigg.

Trigg was on remand, not for Nielsen’s murder, but for conspiring to abduct her in the days leading up to her disappearance in Kings Cross on July 4, 1975. In the documentary, Innes claimed: “I know exactly where she was killed, how she was killed, who killed her, how much they got paid and who paid him.”

He said Eddie Trigg had confessed to the murder, saying “I took her into the restaurant … and I throttled her.”

Last week, The Sun-Herald revealed that what Innes told ABC viewers and listeners was completely at odds with what he had told a 1983 coronial inquest into Nielsen’s death.

On October 11, 1983, he told counsel assisting the court Priscilla Flemming that he had been charged with false pretences – passing dud cheques – in late 1982. Given bail, he was subsequently charged in relation to giving false information to obtain a passport, refused bail and jailed for three months.

He told the inquest Trigg – who was in jail at the same time – had “confessed” that he would be paid $70,000 for pleading guilty to the conspiracy, thus avoiding a trial and potential cross-examination. Trigg later said Innes was lying. 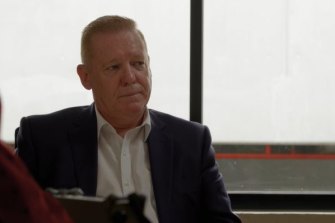 John Innes during an interview on the ABC’s Juanita: A Family Mystery.

There was no mention of an undercover operation. In fact, he told the court he first met Arkins and his colleague detective Norm Maroney on September 4, 1983, more than six months after he got out of jail.

As for Trigg’s alleged confession, Innes told the ABC he remained silent for 38 years for legal reasons, and he had not mentioned it at the inquest because none of the lawyers had asked him.

But the inquest transcript reveals this question: “Did the man Trigg ever say anything to you as far as his opinion was concerned as to what happened to Mrs Juanita Nielsen?” Innes replied “no.”

The Sun-Herald posed a series of questions to the ABC and WildBear Entertainment as to why an agreement had been reached not to ask Innes crucial questions.

A spokesman for the ABC said release deeds, such as the one signed between Innes and WildBear, were standard industry practice.

However, he also said: “The exclusions in the agreement between WildBear Entertainment and John Innes are highly unusual and are not ones that the ABC nor WildBear would accept again.”

The release deed states: “The parties agree that the Australian Broadcasting Corporation has final editorial control of the project.”

abc, documenta, makers, of, pulled
You may also like: