Follow
Home » Lifestyle » IVF on us: Spotify leads the way with family benefits for Australian staff

IVF on us: Spotify leads the way with family benefits for Australian staff

For Australian workers, having a child is often seen as a sacrifice. With meagre parental leave and caregiving entitlements, career and starting a family can sometimes feel incompatible.

But for the 60 Australian staff at music streaming giant Spotify, that isn’t the case.

The company this year introduced new family-forming benefits, giving every employee globally access to a lifetime allowance to use for IVF, donor services, adoption, fertility preservation or fertility assessments and education. The allowance amounts to several IVF cycles in the relevant country (one cycle in Australia costs $10,000). 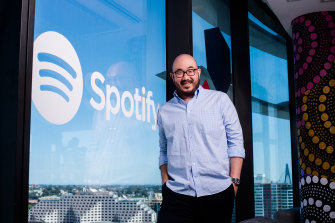 Sydney-based Michael Kim is Spotify’s head of HR for Japan and Asia Pacific, and he helped develop the company’s family benefits.Credit:James Brickwood

This is on top of Spotify’s parental leave policy, which grants its 7000 staff access to six months fully paid regardless of gender or how they become a parent, with the time able to be split into separate periods up to a child’s third birthday.

It’s fitting for a company born in Sweden, the nation ranked number one for its paid parental leave. “The way that country approaches things like family-friendly benefits weaves very much into our company culture,” says Michael Kim, Spotify’s head of HR for Asia Pacific and Japan.

Kim, based in Sydney, says the fertility allowance is designed to reinforce the message to staff at all levels that starting a family is encouraged and without detriment to their career, and they can feel supported going down that path if they want to. He believes it also makes room for younger workers to not put off thinking about their fertility.

“You won’t be retaliated against,” Kim says. “It’s about telling people it’s OK [to have a family] and demystifying that norm, that stereotype, that only women should be taking parental leave and men should be in the office. We just call bullshit to that completely.”

“If the government’s not moving the needle, then maybe it’s the job of private companies to take the lead here to start creating that momentum of change.”

On parental leave, Kim speaks from experience. When his first son was born seven years ago, he was working for a major bank and only had two weeks off, but had to work almost half of that time. When his second child was born last year, he took advantage of Spotify’s entitlements. “It really hit me how much I missed in my first child’s early days,” Kim says.

Kim is also upfront that there is a commercial rationale: generous benefits are an effective recruitment and retention tool. “The war for talent is so competitive,” he says. “[Today’s workers] care much more about a comprehensive overall total reward package than your traditional, what’s my salary and what am I going to get in stock.”

Kim is speaking in the hopes of influencing other businesses and government. The Grattan Institute last month released a report highlighting that Australia has among the least generous parental leave schemes in the developed world, entrenching women as carers and men as earners. The government’s scheme, focused on mothers, pays 18 weeks at minimum wage, and two weeks for partners.

“Advocating for this we hope will not only help our people internally, but will help create education externally for people to wake up,” Kim says.

“If the government’s not moving the needle, then maybe it’s the job of private companies to take the lead here to start creating that momentum of change.

“Companies need to … not see it as a burden of cost, but see it as a long-term investment that will pay off in spades.”

Spotify is one of several multinational organisations, including the likes of Facebook, eBay and Salesforce, with family-forming benefits. Carrot is a start-up that facilitates fertility entitlements for employers, but none of the businesses it supports in Australia are founded here.

“Companies that are not adapting … will become dinosaurs,” Kim says.

Georgie Dent, executive director of The Parenthood, says these workplace policies are “groundbreaking” because they normalise the idea that parenting and productive work can comfortably coexist.

“It sounds ridiculous that this is radical but if you look at the policies that as a country we have here … it actually still is very difficult for lots of families.”

“It sounds ridiculous that this is radical but if you look at the policies that as a country we have here, from government but also the majority of private employers, it actually still is very difficult for lots of families to combine their caring and work responsibilities,” Dent says.

“[These new benefits] say to employees, current and prospective, that we recognise that lots of you will have a family and work, and we as a company will do what we can to make that as easy for you as possible.”

Dent says she is hopeful that some Australian business leaders will be influenced to explore what they can improve for their staff.

“I think we can’t discount how inspiring this is because it does show what’s possible.”

She adds that progressive Australian companies, such as Medibank and Telstra, get a “mind-boggling” number of applications for advertised roles.

“The idea of working for a company that is so willing to back its employees and recognise the full extent of their human experience is very attractive because even when you have older children, combining work and family remains a juggle.”

Professor Sara Charlesworth, the director of RMIT’s Centre for People, Organisation and Work, commends companies with innovative family benefits, but says businesses must also embrace long-term flexible work without staff being penalised because family responsibilities extend for years. “If the work is fundamentally unchanged, involves really intensive, long hours, then it’s not changing anything,” Charlesworth says.

She adds there is a risk that some fertility benefits, such as egg freezing, may spur people to delay child-bearing.

Aside from its competitors, Charlesworth says most other companies won’t be influenced by a business’ generous policies, however she hopes it puts pressure on the federal government to improve its “absolutely inadequate” parental leave scheme.