The rabbi father-in-law of accused child sex abuser Malka Leifer has been arrested for allegedly sexually assaulting a child and a teenager in Israel.

Baruch Pinchas Leifer, an influential and highly regarded rabbi who led the small Chust Hasidic sect, was arrested this week over historical sexual assault allegations, which he denies. 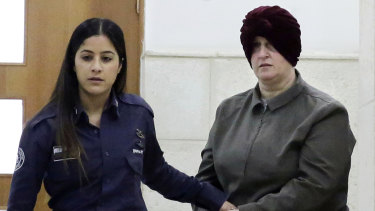 Malka Leifer (right) appears in a court in Israel in 2018.Credit:AP

One of the rabbi’s alleged victims, a family member, claims the rabbi sexually assaulted her several times when she was 12, while a man alleges the rabbi committed sexual offences against him when he was 18.

Two victims’ advocates close to the case verified Ms Leifer’s relationship to the rabbi: Magen for Jewish Communities’ Shana Aaronson, the executive director of the Israel-based advocacy organisation for sexual abuse victims; and, VoiCSA’s Manny Waks, the chief executive of that organisation, which combats child sexual abuse in the global Jewish community.

“We hope that some semblance of justice will prevail,” Mr Waks said.

Local media report the rabbi, who is in his 70s, vehemently denies the allegations against him, and claims they are “a plot against a family dispute”.

His daughter-in-law Ms Leifer, the former principal of the Adass Israel School in Elsternwick in Melbourne’s south east, is due to stand trial this year on allegations she abused three of her students between 2004 and 2008.

Ms Leifer has pleaded not guilty to at least 70 charges, including rape.

In October last year, her lawyers told the County Court they were considering seeking a report on whether she was fit to stand trial.

Defence counsel Ian Hill, QC, said he would have an answer on whether his team would seek the report by the time the case returned to court in early 2022.

Rabbi Leifer’s matter is before the Jerusalem Magistrates Court.