MELANIA Trump wore all black as she bid farewell to being First Lady – and left the White House carrying a $50,000 purse.

She has often used her clothes to send messages during the Trump administration as she joined her husband for his farewell ceremony at Joint Base Andrews. 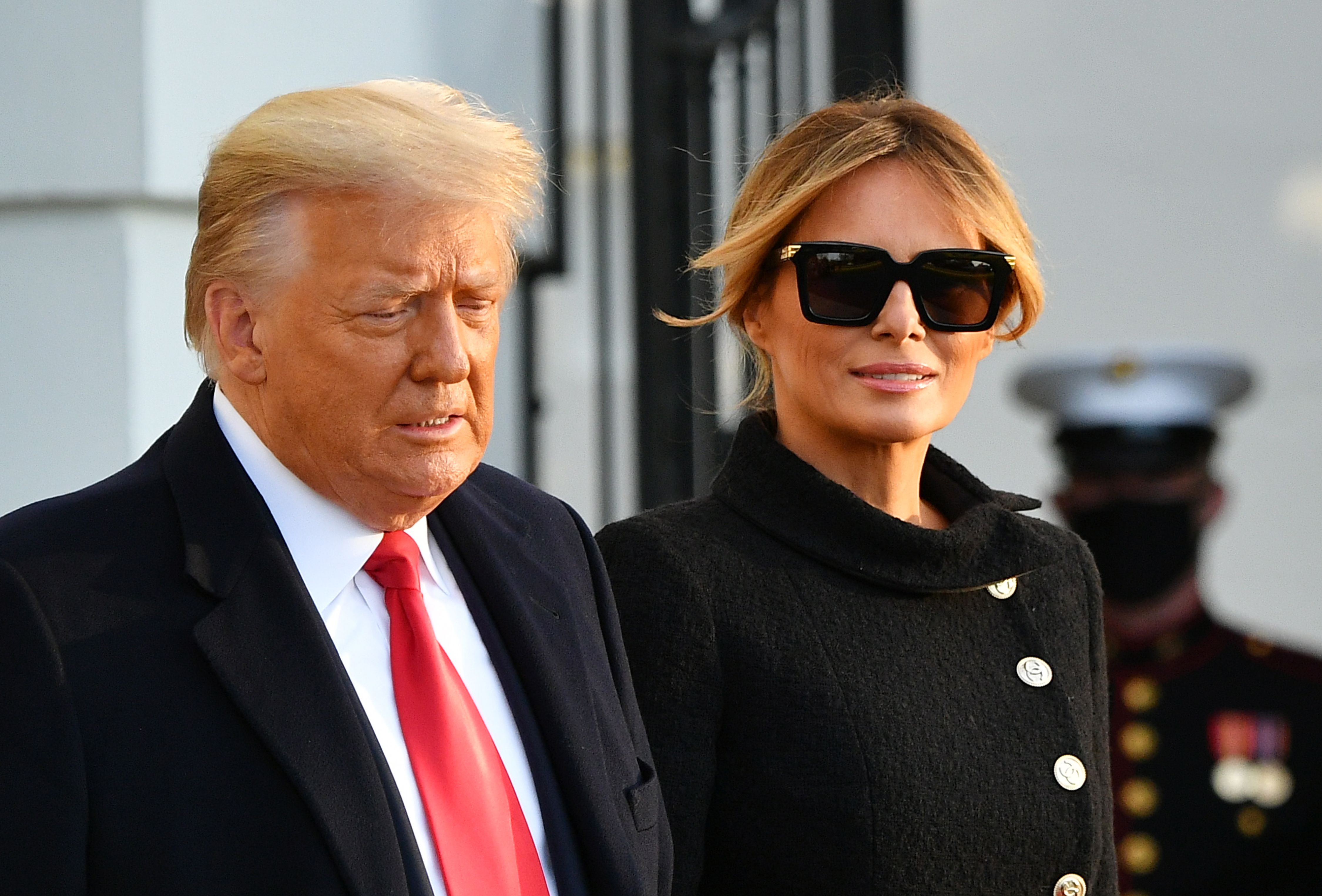 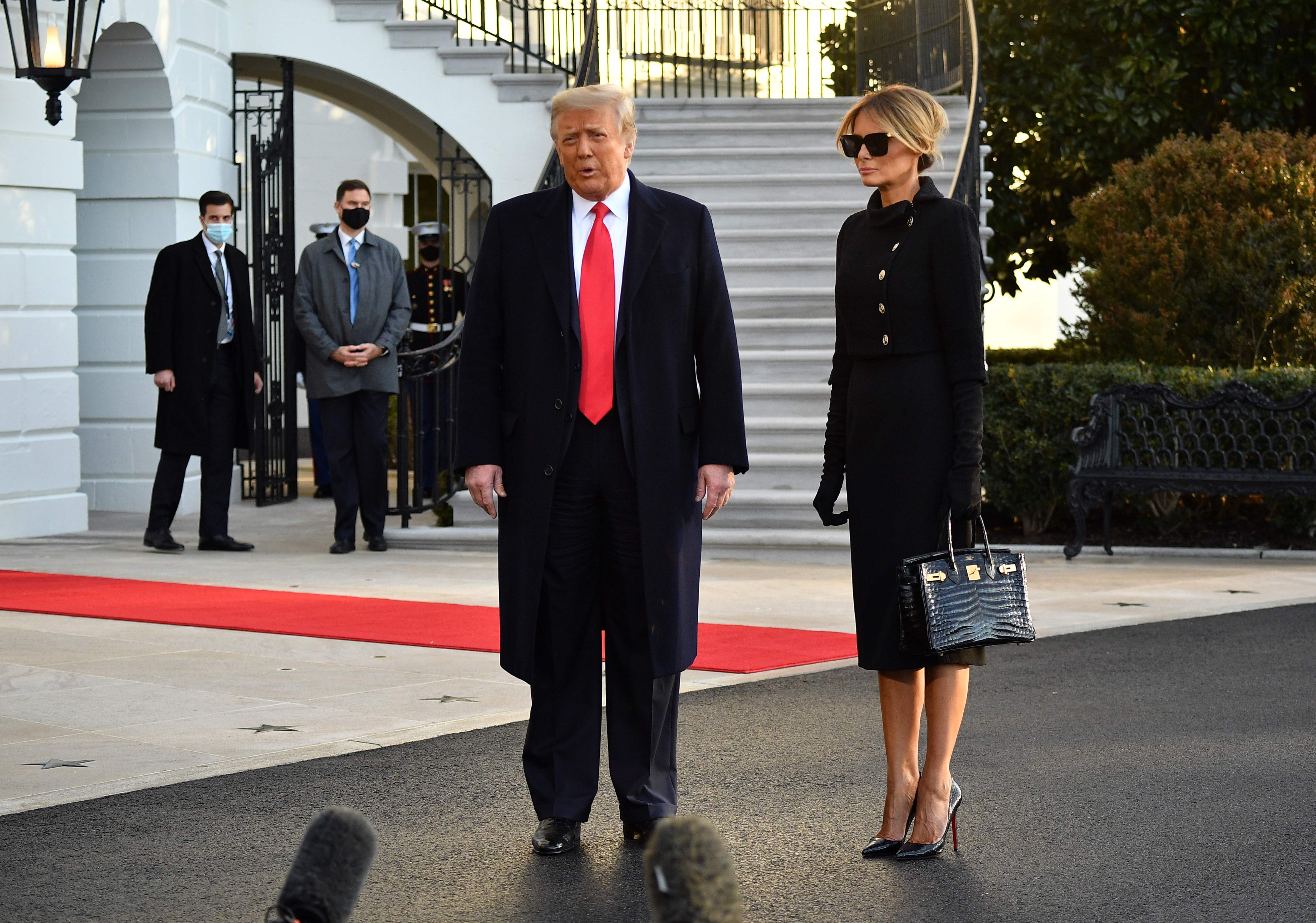 Melania stepped out as she wore a Chanel jacket along with a Dolce and Gabbana dress and heels by Christian Louboutin, reports the NYPost.

Her purse, a crocodile Birkin bag from Hermes, is reported to be worth upwards of $50,000.

She walked alongside Trump as they left the White House for the last time to board Marine One on the South Lawn before flying to the air base.

The couple were then met with a 21 gun salute and applause from their family along with around 500 fans at the site in Maryland.

Melania also spoke a few words as she joined Trump on the podium hailing being First Lady as her "greatest honor".

He said: "Thank you for your support.

And as they exited the White House and greeted reporters, neither Melania or Donald opted to wear face masks.

Her choice of attire was a stark difference from the bright blue Ralph Lauren ensemble she wore four years ago for Trump's inauguration.

And she appeared to change on the flight as she touched down in Florida wearing an orange and dark blue outfit. 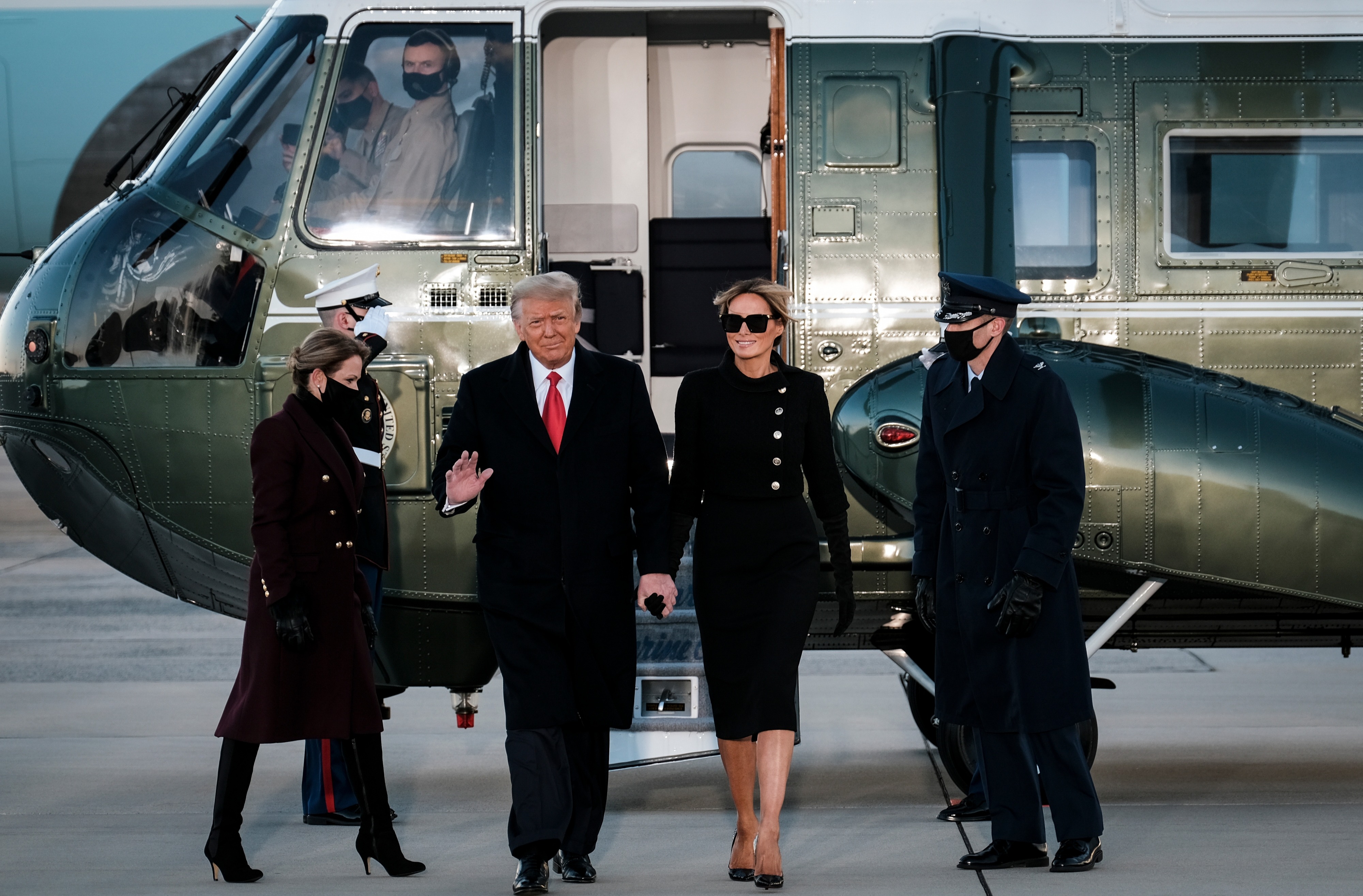 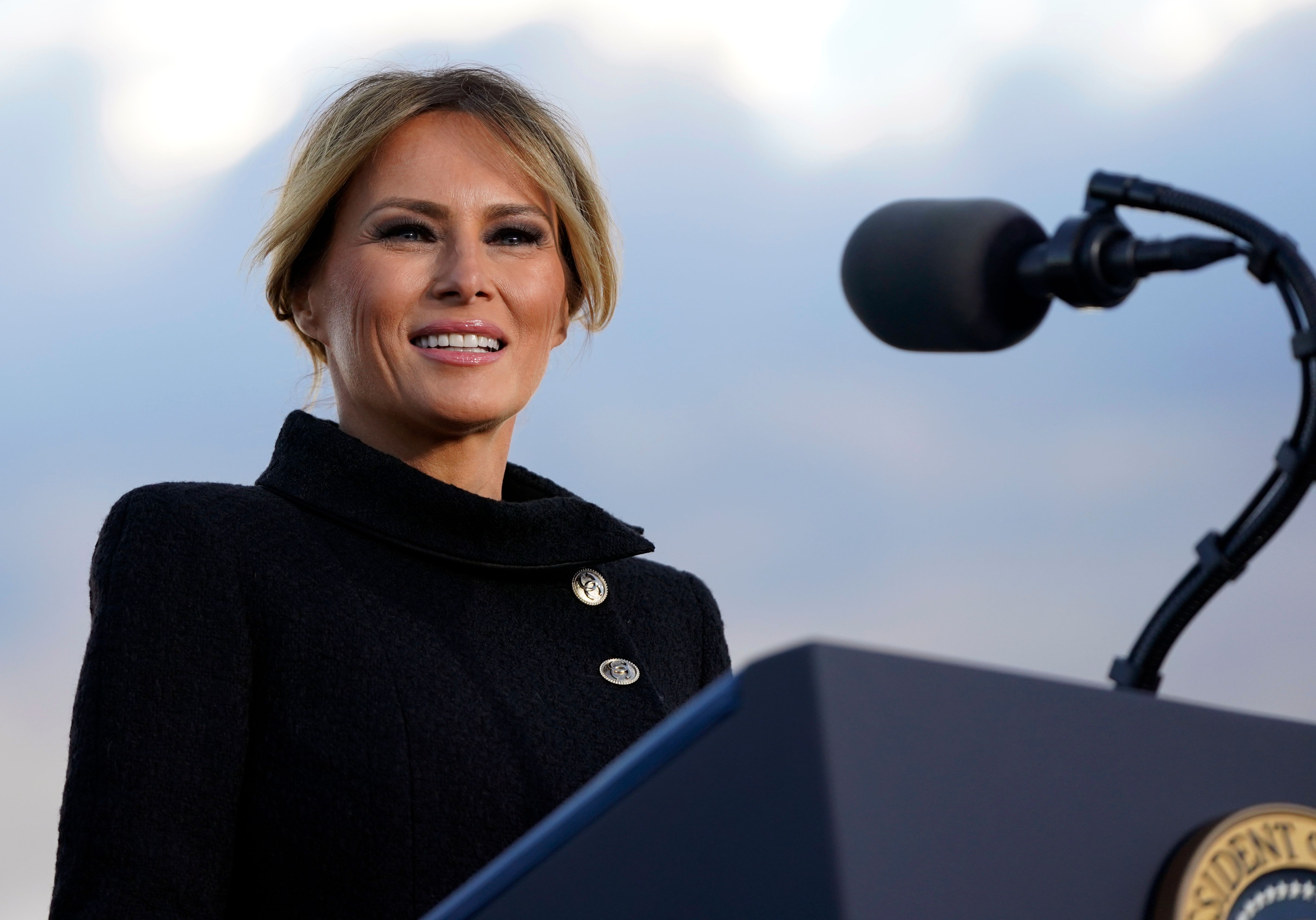 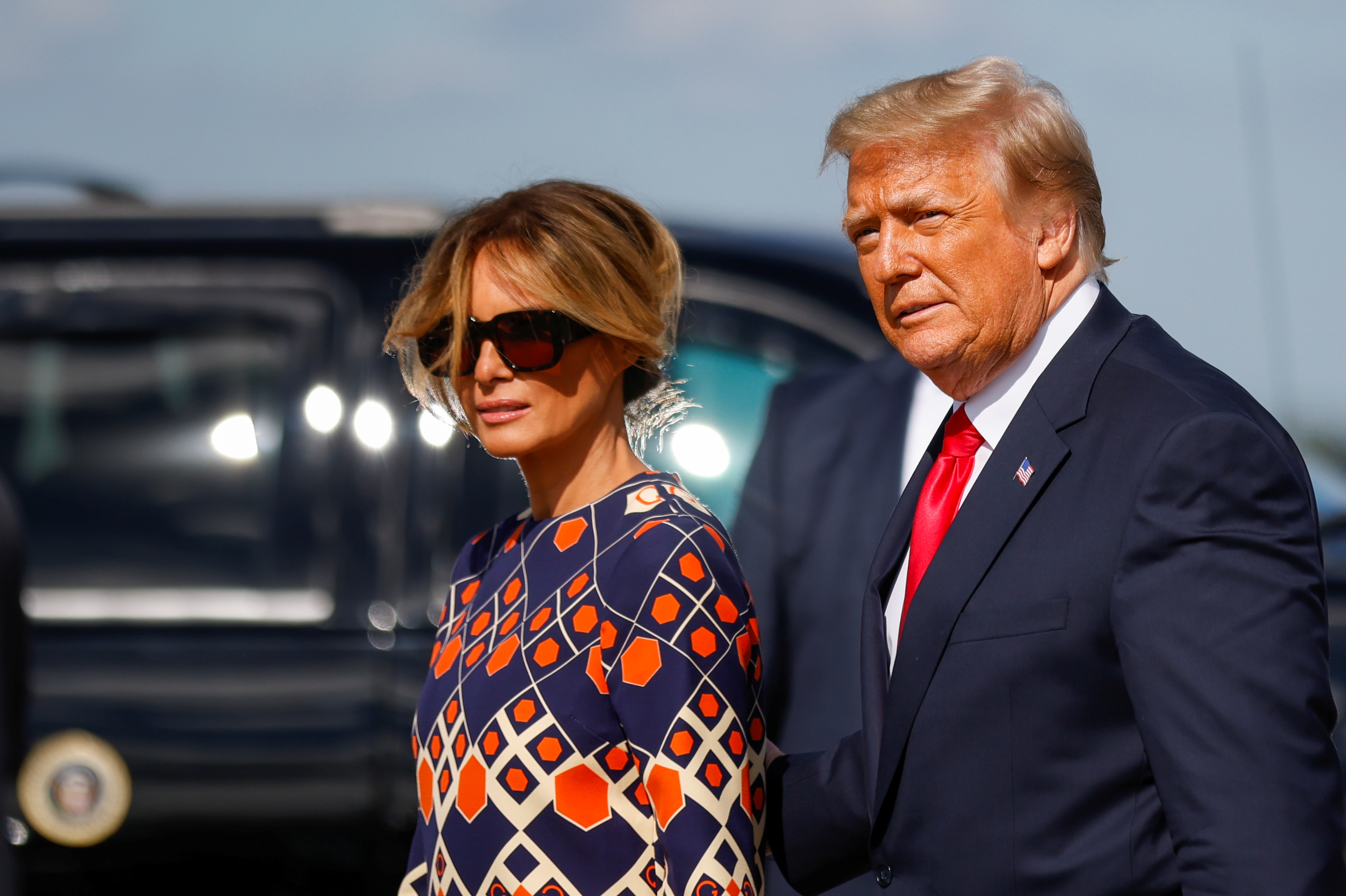 Biden's wife and future First Lady Dr Jill Biden this time around wore the pale blue as she arrived for the inauguration.

"I love you, Jilly, and I couldn’t be more grateful to have you with me on the journey ahead," Joe tweeted.

Elsewhere, purple seemed to be the color of the day asincoming Vice President Kamala Harris wore the shade – along with Hillary Clinton.

The color, which is a mix of primary colors red and blue, is traditionally associated with bipartisanship.

Purple outfits match themes of unity that ran throughout Biden's speech as he attempts to heal bitter divisions in the US.

Michelle Obama also wore a deep purple-y red outfit as she was joined by husband Barack. 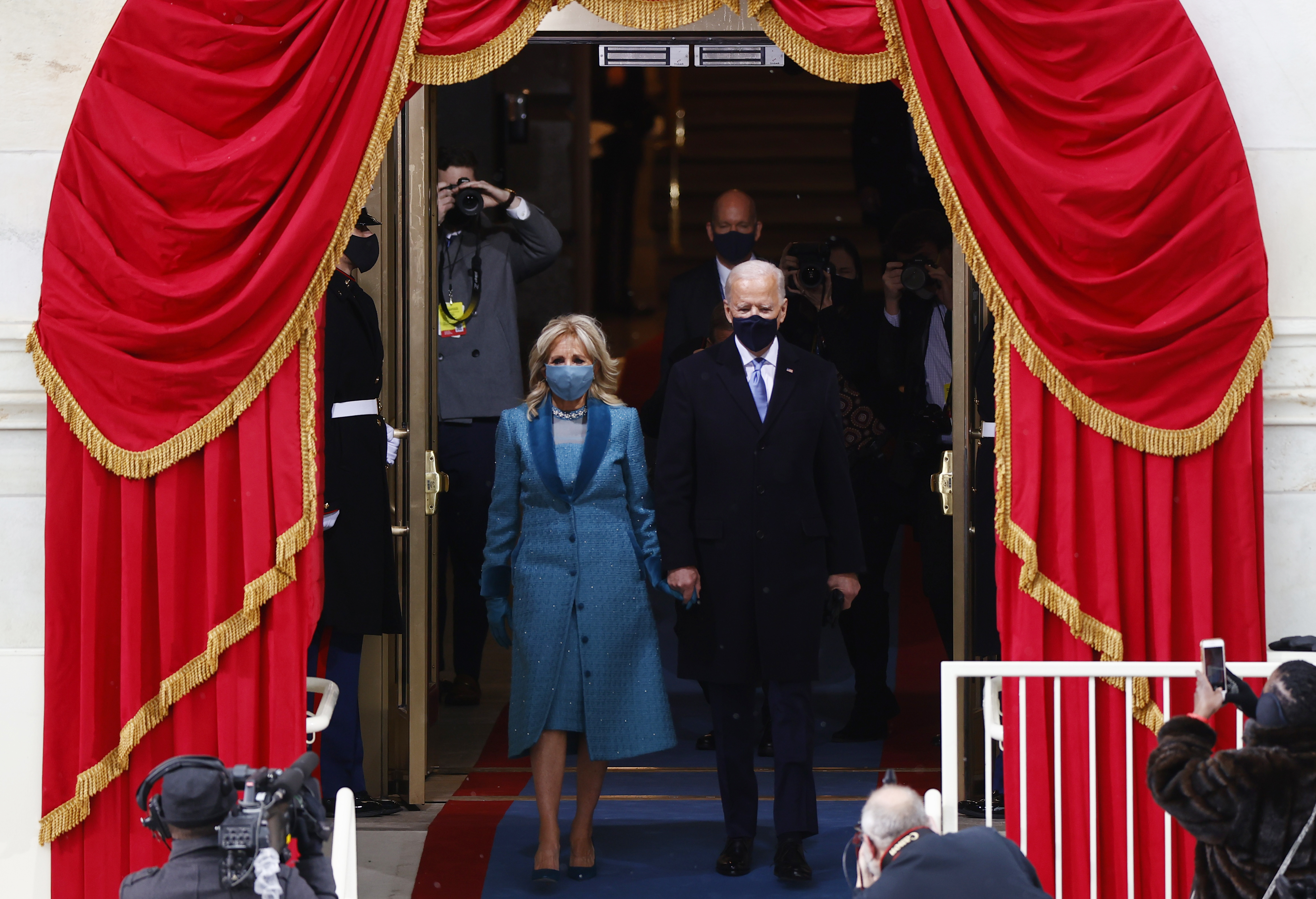 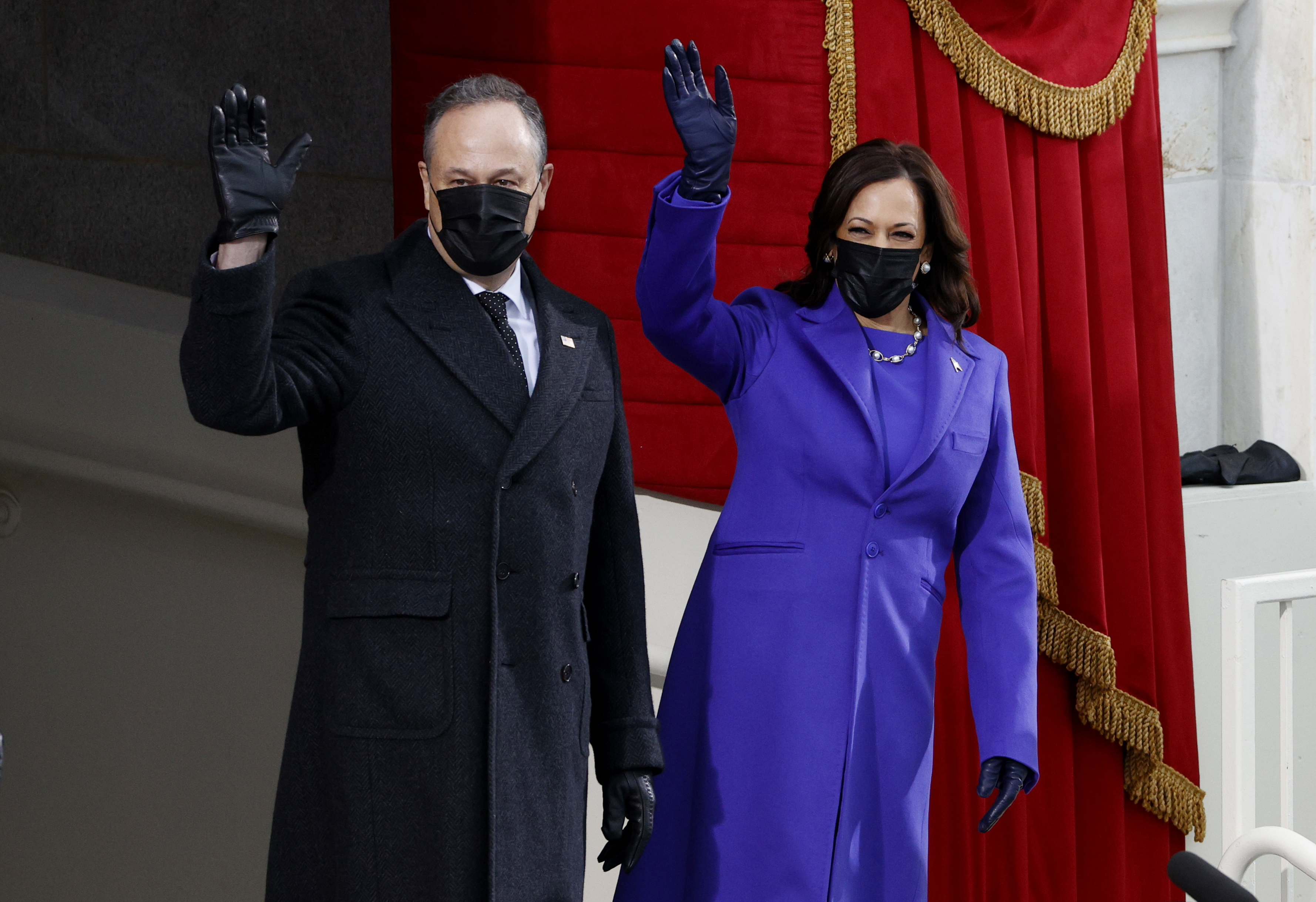 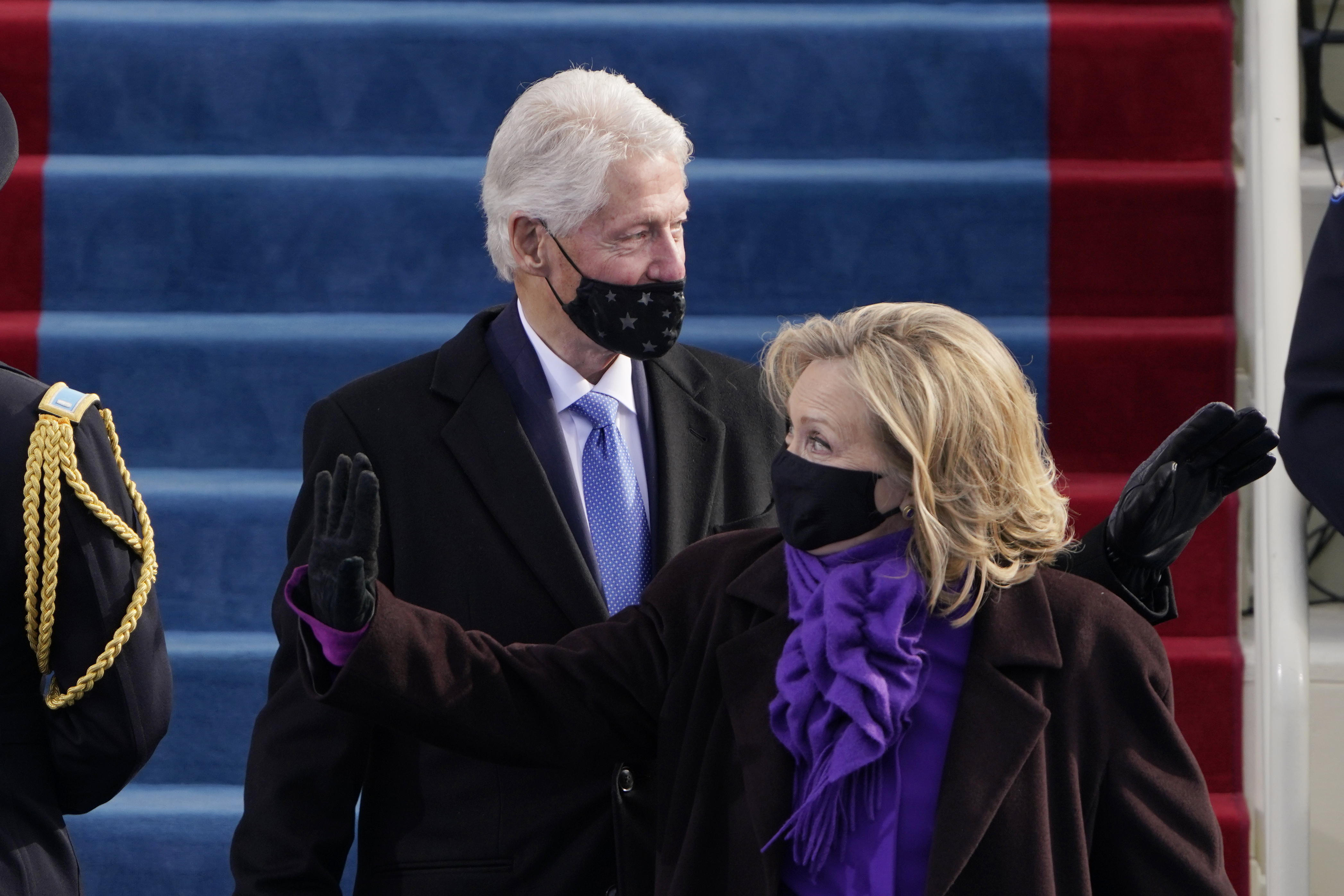 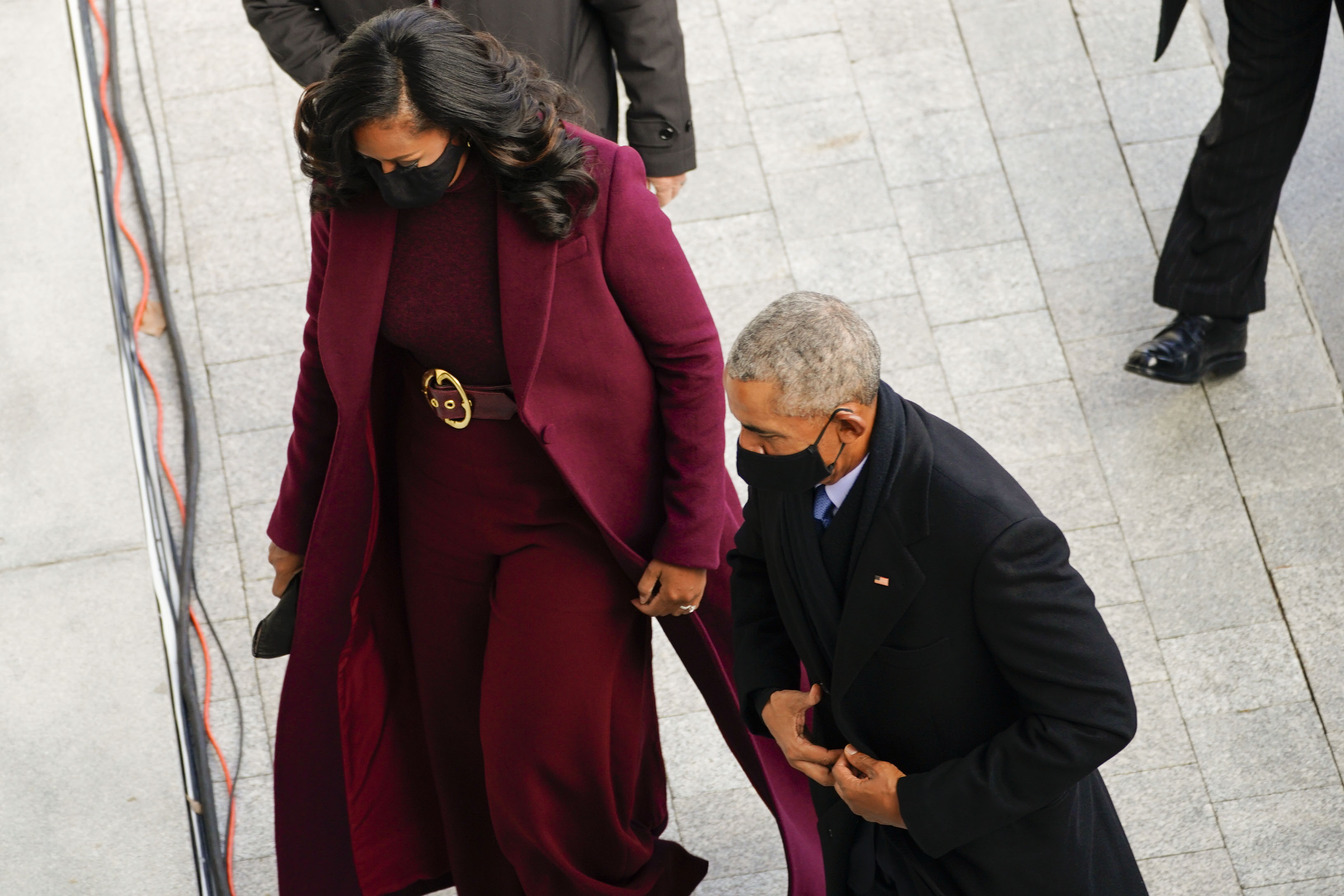 Melania issued a farewell address yesterday as she said "violence in the never the answer".

She also urged Americans to follow her "Be Best" anti-bullying initiative – something which has become her legacy.

"Be passionate in everything you do but always remember that violence is never the answer and will never be justified," she said.

"As the world continues to confront the COVID-19 pandemic I thank all of the nurses, doctors, health care workers, manufacturing workers, truck drivers and so many others who are working to save lives."

"I ask all Americans to use caution and common sense to protect the vulnerable as millions of vaccines are now available." 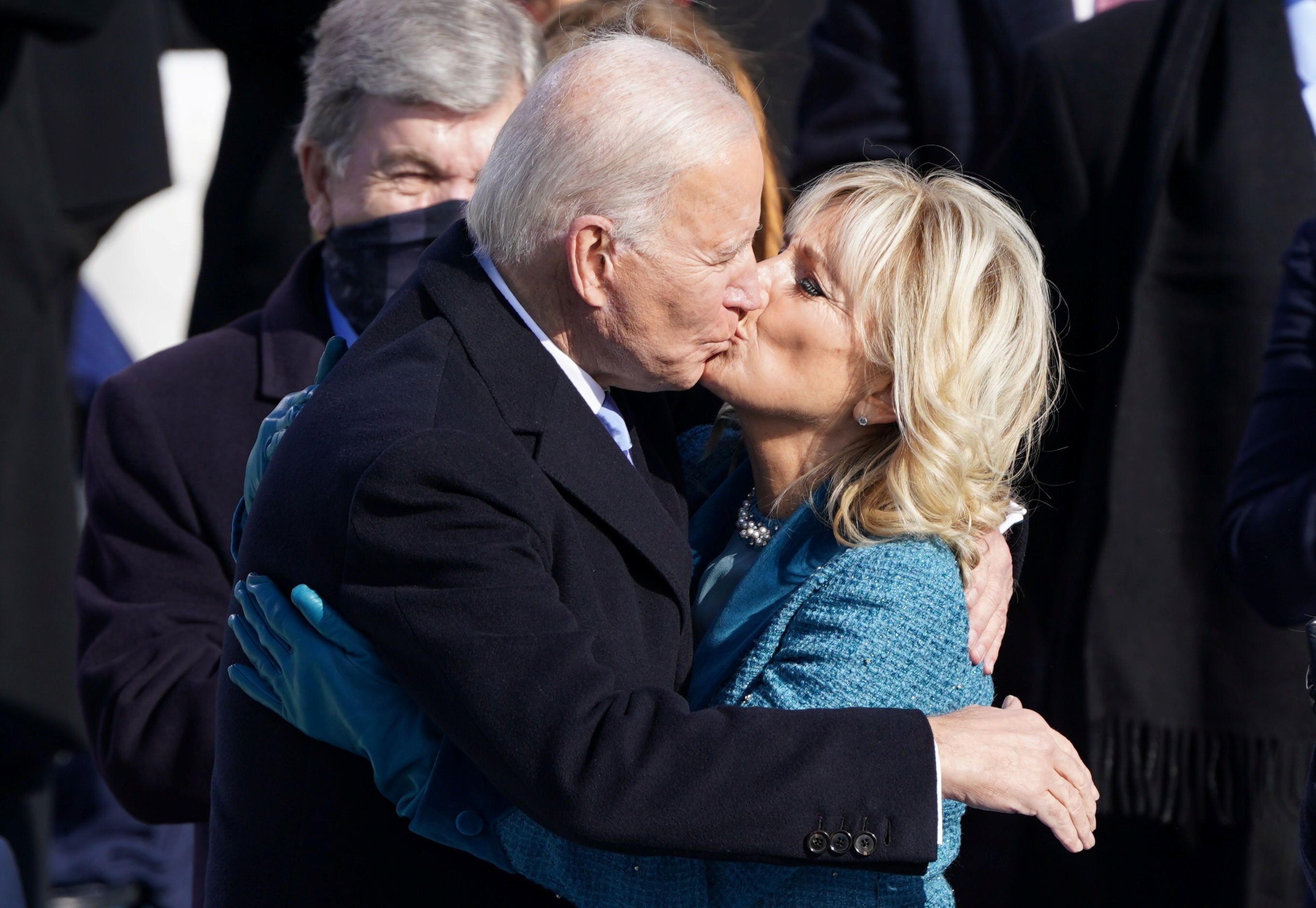 Melania and Trump are expected to enjoy their post-White House life at their estate Mar-a-Lago in Florida.

The couple boarded Air Force One at Joint Base Andrews after the triumphant final rally amid chants of "USA, USA".

Biden's inauguration was muted amid the coronavirus pandemic and security fears following the storming of the Capitol weeks ago.

Crowds have been replaced by thousands of American flags planted on the National Mall.

Trump's refusal to greet his successor and attend the inauguration represents a break with more than a century and a half of political tradition.

However, it was confirmed Trump has followed at least one presidential tradition as he left a letter for Biden.

It comes following months of tension which culminated in the riot on Capitol Hill, as Trump accused the Democrats – without evidence – of stealing the election.

Biden called for unity in his speech and called on America to once again become a "leading force for good in the world".

Designe, in, Melania, stuns, Trump
You may also like: