Thousands of asylum seekers are set to be sent to live in provincial towns and cities under new rules.

Home Secretary Priti Patel is to strip local authorities of a veto allowing them to avoid housing asylum seekers.

Instead of being able to insist entire areas are unsuitable to receive migrants, town halls would be able to lodge objections only over specific streets or neighbourhoods.

The move is designed to slash the number of migrants – including thousands arriving by small boat from northern France – being kept on full board in hotels at the taxpayers’ expense.

Currently, the Home Office has 37,000 people in hotels as they await decisions on their migration status, costing the taxpayer £4.7million a day.

This includes 9,500 Afghans who had worked for British authorities and were forced to flee after the Taliban takeover last summer.

The Home Office believes the new rules will help spread asylum seekers more evenly across the country, easing pressure on London and the South East. 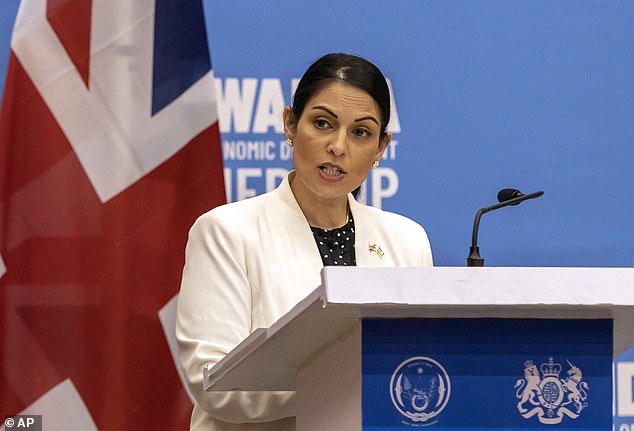 A source said: ‘Under the old system, local authorities can raise a “flag” which means asylum seekers can’t be dispersed to their area. But under the new system that can’t happen. The local authorities have to be involved unless there are very specific issues about a specific area.

‘That could be a particular street or neighbourhood, but not a huge area or a whole town.’

700% rise in student visas for Nigerians

The number of Nigerian students coming to Britain has surged by 686 per cent in less than three years.

Indians overtook Chinese to become the largest student group, with just under 118,000 sponsored-study visas issued, a rise of 215 per cent on 2019. There was also a huge increase in Pakistani students – up 377 per cent to 23,490.

A ‘graduate visa route’ which launched last year now allows foreign students to live and work in this country for up to two years after they graduate.

If they later find a qualifying job they are also able to transfer onto a skilled worker visa, a potential route to citizenship.

Madeleine Sumption, director of the Migration Observatory at Oxford University, said the scheme had made the UK more attractive to Nigerians.

A Home Office source said it was for universities to decide how many international students they sponsor.

Under proposals set out by the Home Office earlier this year, local authorities will not be expected to accommodate more than one asylum seeker for every 200 local residents.

Immigration minister Kevin Foster wrote to all councils in April telling them the system was ‘placing unsustainable pressure on a limited number of local authorities’.

Highlighting the number of migrants in hotels, he wrote: ‘This is not acceptable; it is not fair on the taxpayers, and it does not offer the right solution for communities or those seeking asylum.’

Instead, the Home Office will find ‘dispersal properties within the private rental sector in all local authority areas across England, Scotland and Wales’, the minister wrote.

The veto ban is the first detail of how the new regime may work. There were more than 55,000 asylum applications in the 12 months to the end of March – in the same period only 1,649 asylum seekers were resettled into longer-term homes across the UK. Yorkshire and the Humber took the most, with 374, while only 48 went to Wales. Scotland took 204.

London and the South East took 260 but, separately, houses the most migrants in hotels. The new measures are said to be coming into force in the middle of next month.

It came after new figures showed asylum claims have hit the highest level for nearly 20 years, with 63,089 applications in the year to June. Including dependants, the claims covered more than 75,000 people.

The surge has been driven by huge numbers of arrivals in small boats across the Channel, 94 per cent of whom go on to claim asylum. Latest figures from the Ministry of Defence revealed 804 migrants arrived from northern France on Thursday, taking the year’s total so far to 24,090.

Yesterday the Mail reported that the annual cost of Britain’s asylum system jumped by 56 per cent – £756million – to £2.1billion in 2021-22. The massive bill is largely driven by soaring numbers of asylum seekers receiving taxpayer-funded support, including accommodation. More than 116,000 were given hand-outs at the end of June, up 37 per cent in three months.

The Home Office last night denied the asylum dispersal rules will be changed in September, adding: ‘There is nothing in place preventing local authorities from housing destitute asylum seekers.’