More than 2500 cancer diagnoses were missed in Victoria during the state’s coronavirus restrictions last year, with a steep fall in the detection of prostate, skin and breast cancers, along with head and neck tumours.

Modelling by the Victorian Cancer Registry at the Cancer Council, published in the Medical Journal of Australia on Monday, estimates there were 2530 cancers missed or delayed diagnoses between the beginning of April and the middle of October. 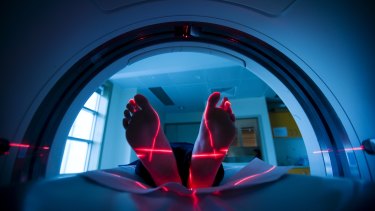 Concerns are mounting that the delays in cancer diagnoses could lead to avoidable deaths.Credit:Nic Walker

The registry also found there were 5446 fewer pathology notifications, used for lifesaving cancer screening, than expected over the period, a drop of about 10 per cent on the previous year.

Victorian Cancer Registry director Sue Evans said any delay in a cancer diagnosis meant the disease would be detected at a later stage when there were potentially fewer treatment options and survival rates plummeted.

While the true extent of the thousands of missed cancer diagnoses is not yet unknown, concerns are mounting that the delays in diagnoses will hinder the prospects of patients diagnosed with more aggressive cancers and could lead to avoidable deaths.

Professor Evans foreshadowed a potential cancer spike in the next six to 12 months, fuelled by a surge in later-stage cancers being diagnosed, increasing demand on the healthcare system.

“Our modelling indicates that it’s possible that approximately 2500 Victorians will not only be
faced with the prospect of being diagnosed with cancer, but with a later stage cancer than they possibly may have been, and this would be devastating for patients, families and loved ones,” Professor Evans said.

The study found the COVID-19 pandemic had resulted in a decline of up to 30 per cent in life-saving cancer diagnostic procedures, compared with the same period in 2019.

The most significant decrease in diagnoses occurred for head and neck, prostate and breast cancer and melanoma, Professor Evans said.

Those identified by researchers as being most a risk or having their cancer diagnosis missed were older Victorians, men and people living in higher socio-economic areas. Reduction in cancer diagnosis was greatest between April and May last year. 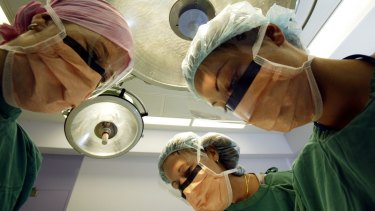 The study found the COVID-19 pandemic had resulted in a decline of up to 30 per cent in life-saving cancer diagnostic procedures, compared with the same period in 2019.Credit:Louie Douvis

Grant McArthur, of the Victorian Comprehensive Cancer Centre, said the highest number of delayed diagnoses had been found in prostate cancer, where more than 1000 cases were missed.

“We’re worried about that because of the sheer numbers,” Professor McArthur said.

But he said he was increasingly concerned about people who had undiagnosed head and neck cancers, which often required complicated treatment and were more aggressive than other cancers.

”On the other extreme is head and neck cancer, where the numbers are not as high as prostate cancer, but they require really intensive treatments,” he said. “It involves surgery, radiation, chemotherapy, and is quite a difficult treatment for many patients, and this could be even more challenging for those patients because of the delays in the diagnosis.”

Professor McArthur said he was bracing for an influx of cancer patients in the next six to 12 months.

“This is still very significant, we think, in a Victorian healthcare setting, and there will be additional demand on the health system as a result.“

He said doctors were also preparing to see more advanced melanomas after people had delayed their skin checks during the pandemic.

The findings of the statewide study follow a report by the Australian Institute of Health and Welfare late last year on the impact of the pandemic on national screening tests, which found there had been a worrying decline in screening for breast, bowel and cervical cancers.

It found just 1100 mammograms were performed nationally in April, compared with 70,000 the month before – a drop of 98 per cent – as COVID-19 infections soared and restrictions to contain the virus were enforced.

There was a 30 per cent drop in mammograms nationally from January to June. About 344,000 tests were conducted, compared with about 489,000 in the same period two years before.

There were about 145,000 fewer bowel screening tests completed between January and June last year. About 680,000 were returned, compared with just under 825,000 for the first half of the previous year.

The AIHW researchers found mammogram screenings in Australia picked up again in June, with about 70,000 tests conducted that month, but this was still 10,000 fewer per month than in 2018.