Mount Rushmore is shut down as wildfires burn more than 1,900 acres

Mount Rushmore is shut down as wildfires burn more than 1,900 acres in South Dakota and force evacuations of 500 homes

The Mount Rushmore monument in South Dakota has been closed as three separate wildfires burn out of control in the area across approximately 1900 acres of land – forcing the evacuation of up to 500 residents.

The fires were being propelled by record-dry drought conditions and high winds, and the largest outbreak was threatening Rapid City, which is known as the gateway to the Mount Rushmore monument.

The cause of the blazes has not yet been confirmed, but South Dakota is experiencing one of its worst droughts on record, with 40 per cent of the state classified as under ‘severe drought’.

South Dakota Governor Kristi Noem has traveled to the area to oversee the response.

Noem said on Monday afternoon that the fire was not threatening Mount Rushmore at that time.

She said ‘there have been losses and that is tragic.’ No injuries have been reported. 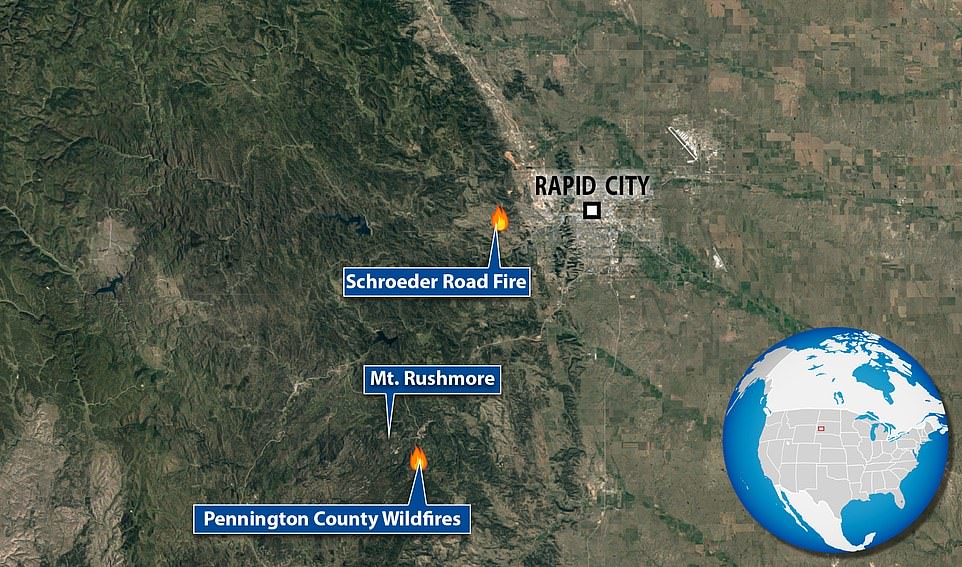 One of the fires, situated in Pennington County, has burned within one mile of Rapid City, South Dakota 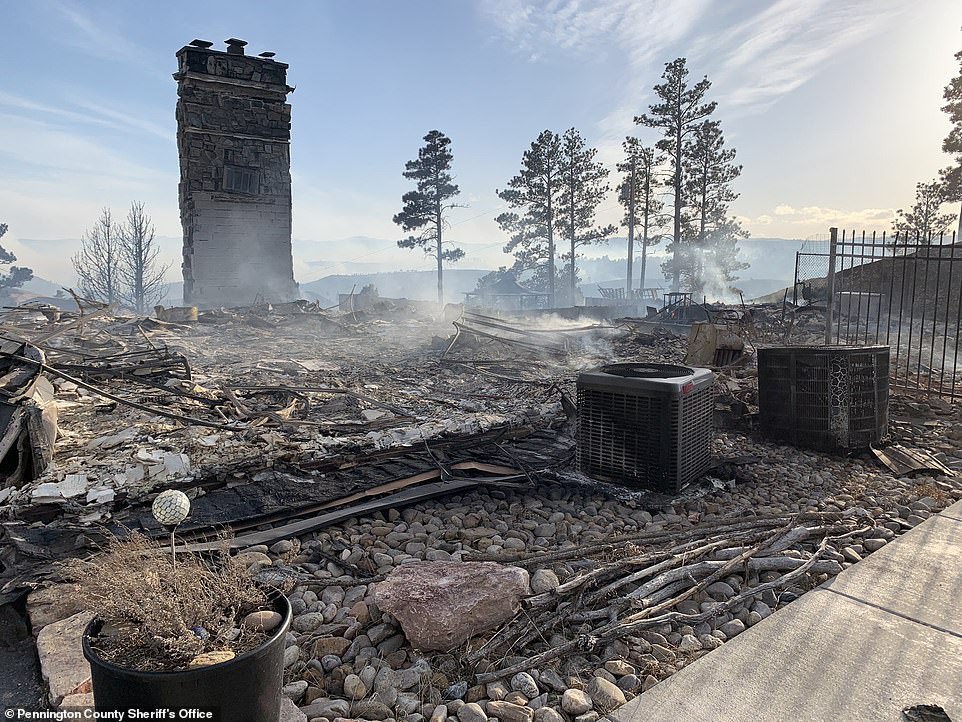 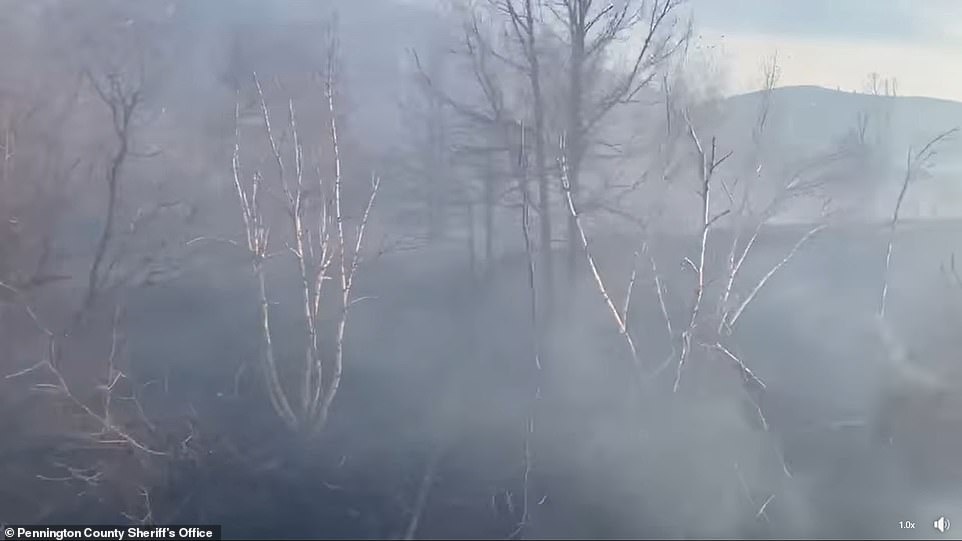 Firefighters had to battle high winds, very dry conditions and acrid, thick smoke as they tried to contain the blazes 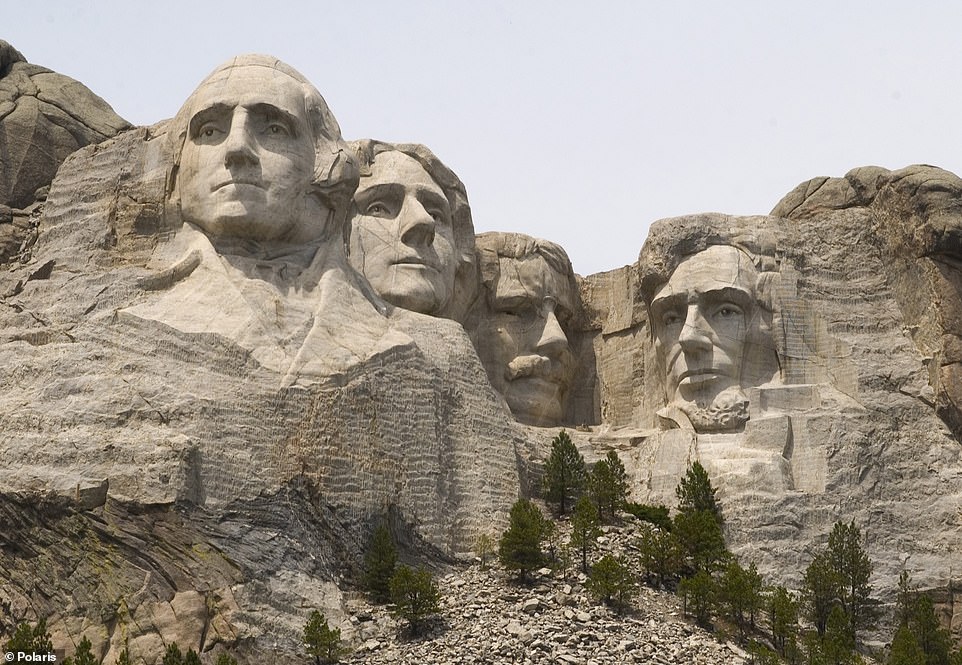 Mt. Rushmore National Monument, where the faces of Presidents George Washington, Thomas Jefferson, Theodore Roosevelt and Abraham Lincoln are carved in granite, was closed Monday afternoon as wildfires raged nearby

One of the fires began on Monday morning on a private property in Schroeder Road in the Nemo area 15 miles west of Rapid City.

Two others started are burning southwest of Rapid City, near Keystone, with one covering an estimated 75 acres (30.35 hectares) and the other 20 acres.

The Pennington County Sheriff’s Department warned earlier that it was a ‘very active and dangerous scene.’ About 250 firefighters were battling the blaze on a windy afternoon when gusts have ranged from around 50 mph to 72 mph, the Rapid City Journal reported.

The alarm was raised by the Sheriff’s Office around midday on Monday, when it informed residents law enforcement and fire department agencies were responding to a major fire near Schroder Road in the Nemo area.

‘High winds blowing out of the west are pushing the fire east. Evacuations in the Westberry Trails area are underway.

‘This is a very active and dangerous scene. Law Enforcement requests that citizens stay out of the area and use alternate routes.’

Hundreds more homes were ordered evacuated throughout the afternoon, with residents told to

Aerial shots taken by the sheriff’s office showed the extent of the blaze, which by mid-afternoon had burned through over 800 acres.

At 2pm Mountain Daylight Time, it was announced Mount Rushmore would be closed immediately due to the fires. 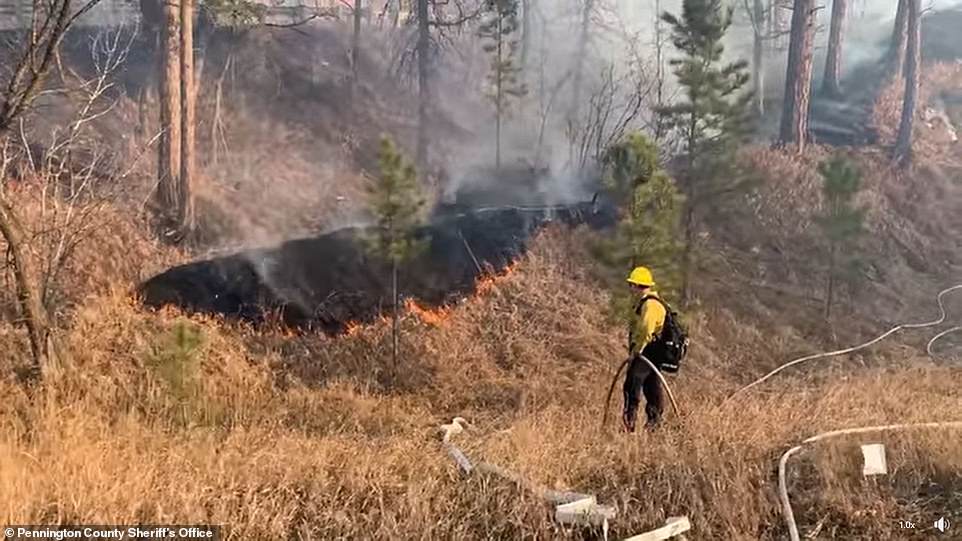 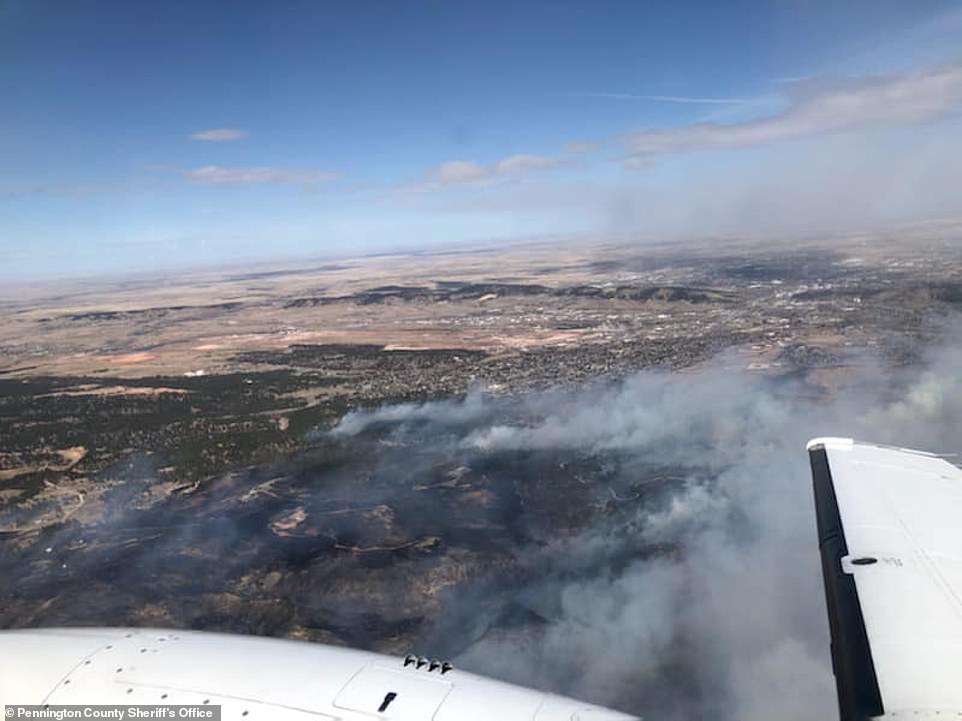 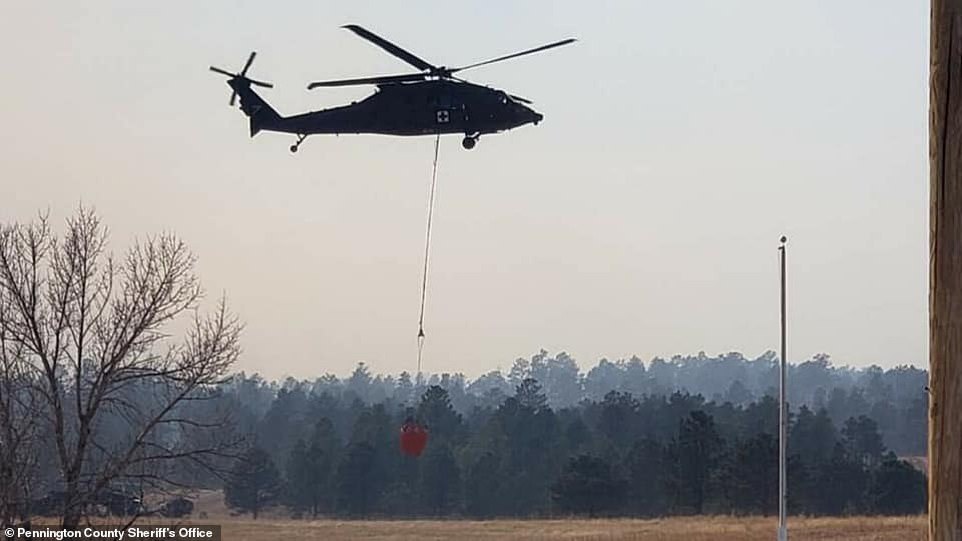 Helicopters were called in to try to contain the blaze, which has been aided by record-dry conditions across the state 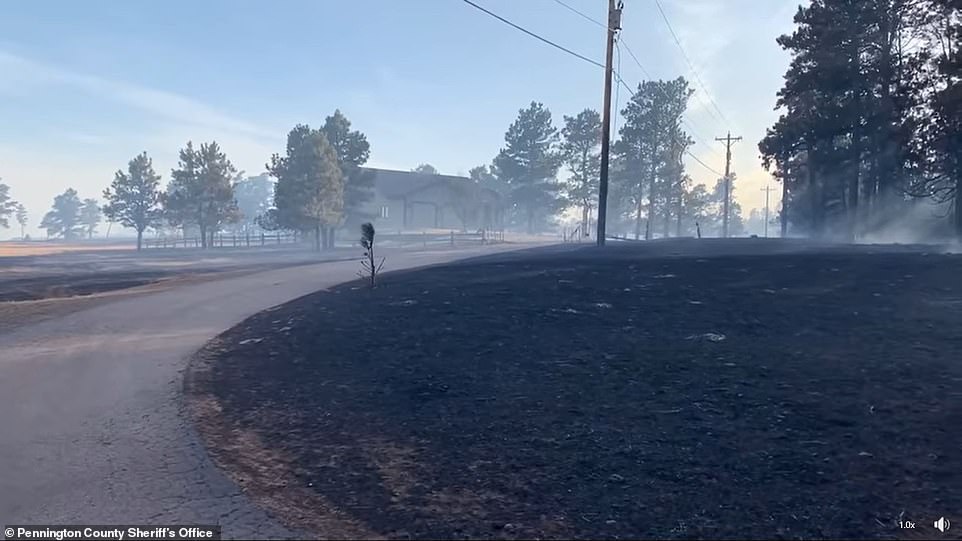 An eerily quiet scene in South Dakota after wildfires swept through earlier, scorching the land 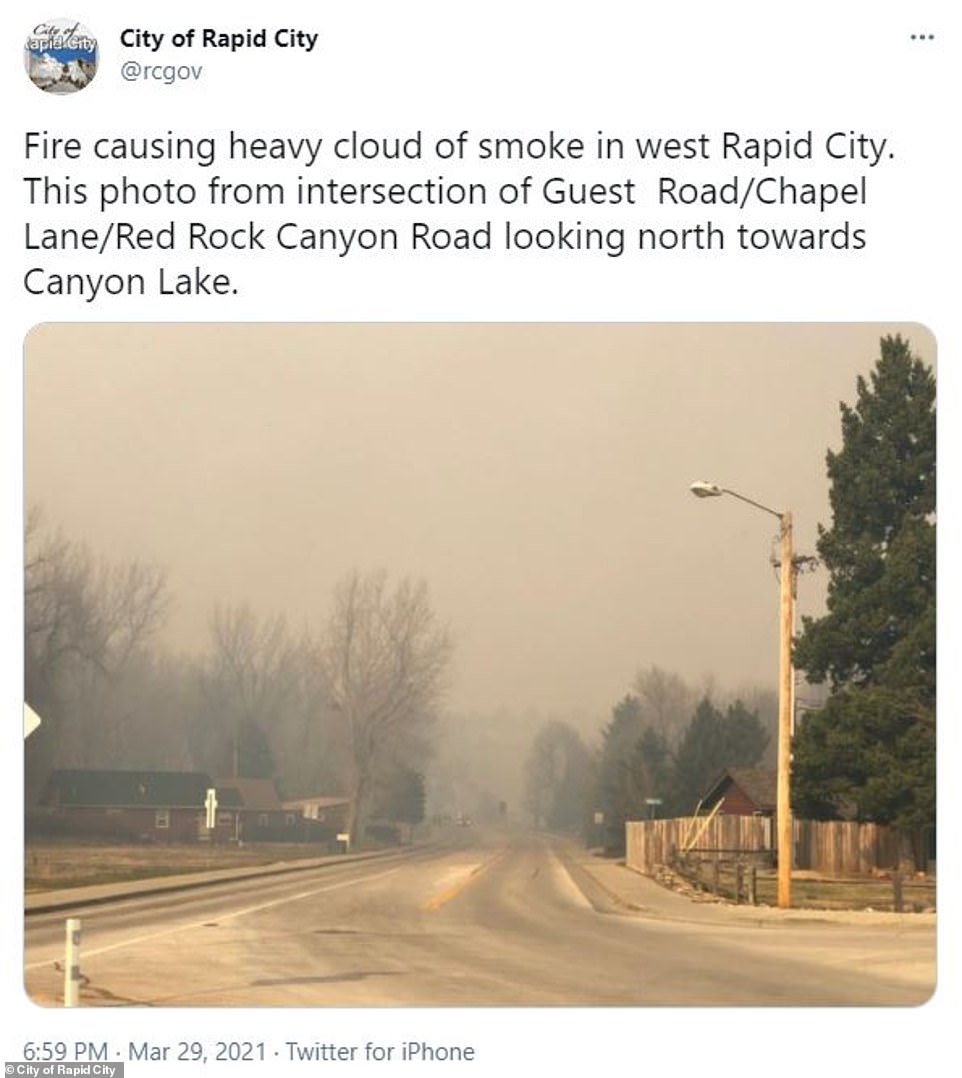 ‘Pinedale Heights and West Camp Rapid could possibly be next to evacuate. The fire along Schroeder Road near Nemo is spreading, so please be ready to evacuate if need be.’

The entire state of South Dakota is suffering from ‘abnormally dry conditions, or worse’, according to Agriculture.com. It said about 40 per cent of South Dakota’s 49 million acres was in severe drought as farmers there heading into their planting season.

On Monday night, Sheriff’s posted on Facebook that the two fires burning near Keystone had destroyed at least 70 acres of woodland.

‘Highway 16A remains CLOSED through Tuesday morning from the edge of Keystone to the Wrinkle Rock Campsite on Hwy 244.

‘Iron Mountain Road is closed from the edge of Keystone to the Custer/Pennington County line.’

The Associated Press reported South Dakota transportation officials had shut down a 42-mile stretch Interstate 90 from Kadoka to Murdo for three hours due to grass fires.

Mount Rushmore National Monument, where the faces of George Washington, Thomas Jefferson, Theodore Roosevelt and Abraham Lincoln have been carved into the granite stone, is one of the best-known landmarks in the United States.

as, down, is, mount, Rushmore, shut
You may also like: