Multiple people are injured after mass shooting at Buffalo

Multiple people were injured and several are reported dead after a gunman opened fire inside a Buffalo supermarket on Saturday.

At least nine people have been shot, including multiple people who were pronounced dead on the scene at the Tops supermarket at 1275 Jefferson Avenue, BNO News reported.

The suspect, filmed wearing a military uniform, has been taken into custody by the Buffalo Police Department.

The video of the arrest shows police cuffing the suspect and trying to get people away from the scene as several bodies lie motionless on the floor.

‘A shooter, it’s a mass shooter type s***,’ one of the onlookers says as police and emergency responders detain the man in the military uniform.

‘Damn, look at him, a young boy,’ the onlooker adds as he comments on one of the bodies.

Police then instruct the onlookers to back up as the take control of the situation. 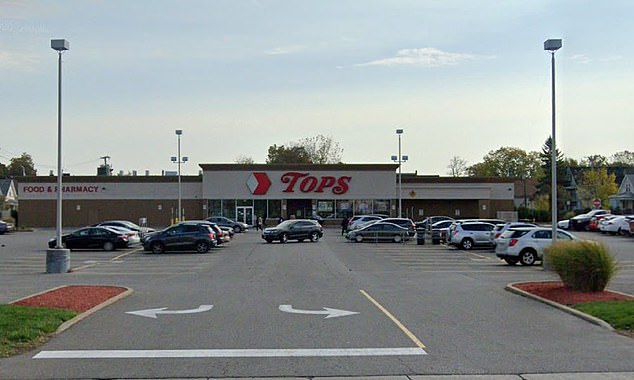 The shooting took place on Saturday at the Tops supermarket (pictured) at 1275 Jefferson Avenue, in Buffalo, New York. At least nine people were shot

Eric County Executive Mark Polonczar confirmed that there had been a shooting in the area and that residents should stay away from the supermarket.

‘I have been advised of an active multiple shooting event at the Tops Markets on Jefferson Street in Buffalo,’ Poloncarz tweeted. ‘Police are on scene. Please stay away from the area.’

New York Governor Kathy Hochul responded to the shooting and said the state has offered assistance to local officials.

Will G., a frozen dairy worker at the supermarket, said he walked out of the cooler to stock milk when the shooting occured.

‘I just heard shots. Shots and shots and shots,’ he told Buffalo News. ‘It sounded like things were falling over.’

He added that he hid in the cooler and that more people joined him to take shelter from the gunfire.

This is a developing story.