Gary Speed’s widow Louise has been tragically bereaved for the second time after her new husband lost a fight against brain cancer, MailOnline has learned.

Louise and Quinton tied the knot just over a year ago in a lavish ceremony at Peckforton Castle in Cheshire, in a room filled with stunning white flowers and candles.

The couple were business partners as directors of successful new build and renovation company Bow Property Development in Chester for six years. 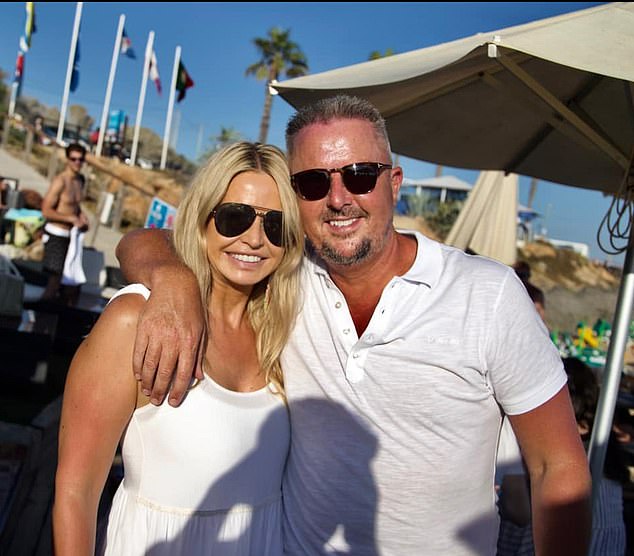 Louise and Quinton were a picture of happiness, tying the knot more than a year ago during a lavish ceremony in Cheshire. But he died months later from cancer 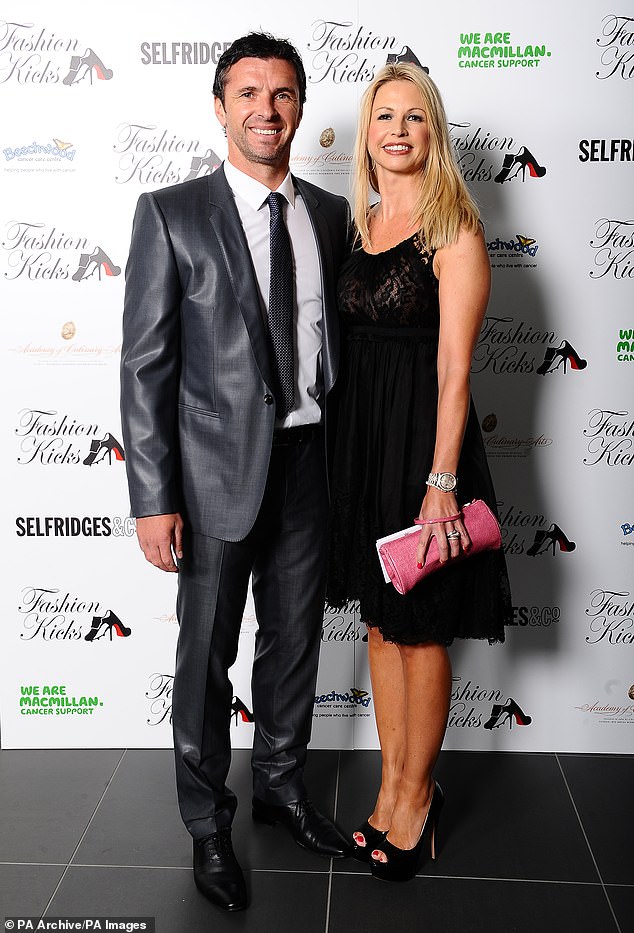 The trauma is the latest tragedy to hit Louise and her family following the death of her former husband, Gary Speed (pictured), who took his life more than a decade ago

But Quinton succumbed to an aggressive form of brain tumour only six months later, it has now emerged.

A family source said Quinton had been battling brain cancer for more than two years.

He added that Quinton was a ‘wonderful’ father himself and him and his wife Jenny ‘had been left with a wealth of beautiful and extraordinary memories’.

Guests at the couple’s wedding in November 2021 included former England captain Alan Shearer, who was a close friend of Gary’s after they played together for Newcastle United.

Their relationship was revealed after Louise told the Daily Mail she had found happiness and joy with a new partner, but added she had built up a layer of emotional protection around herself. 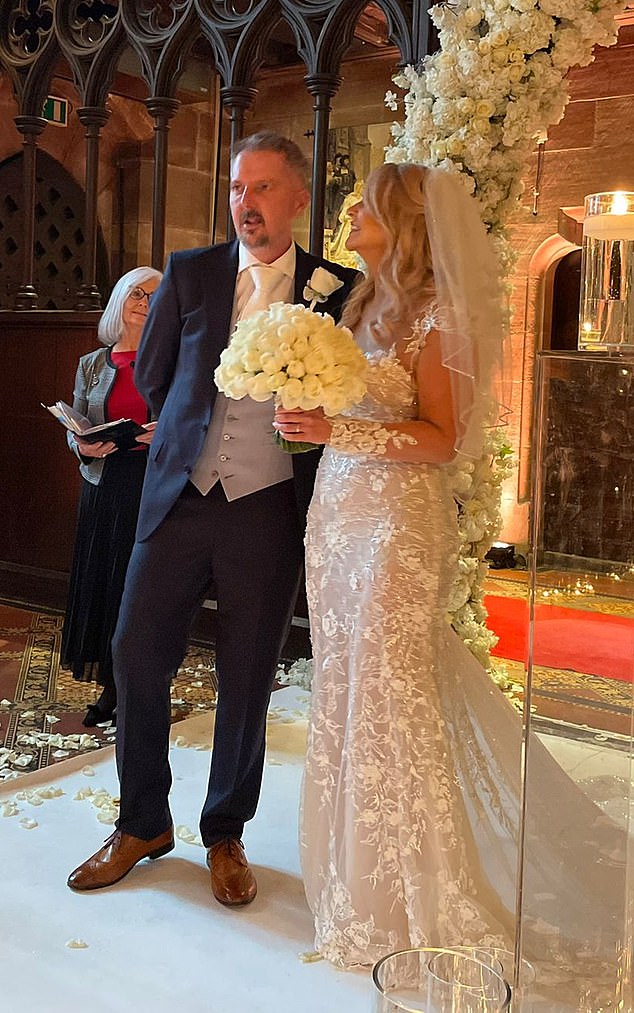 In photographs from their marriage in November 2021, Louise can be seen in a stunning white lace gown with intricate detailing across the sleeves and train (pictured, at the altar) 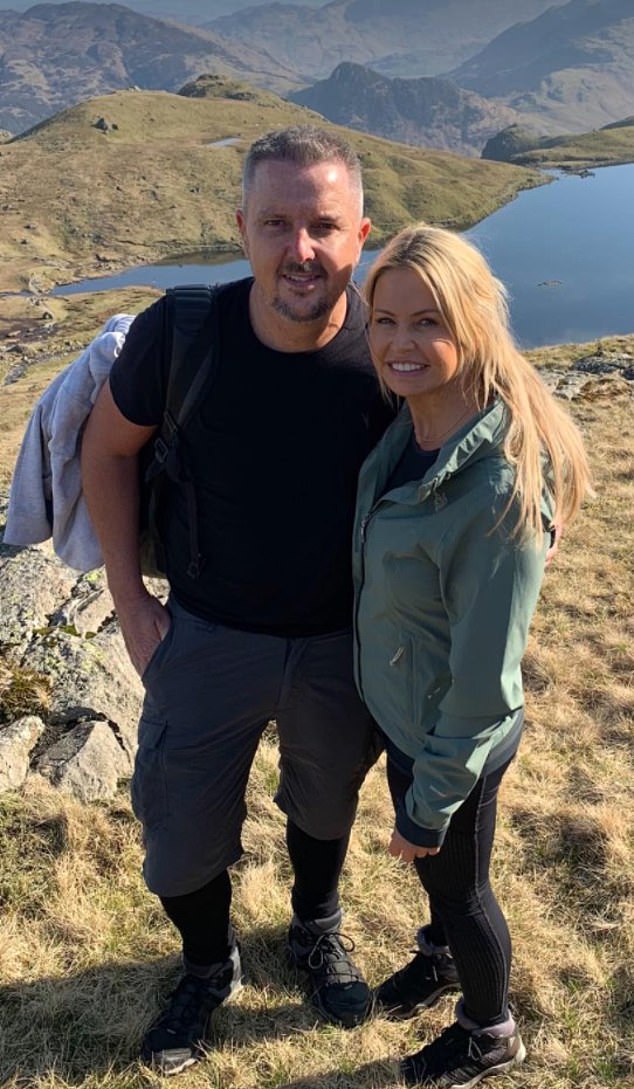 But Quinton tragically succumbed to a brain tumour six months after his marriage to Louise, it has today emerged 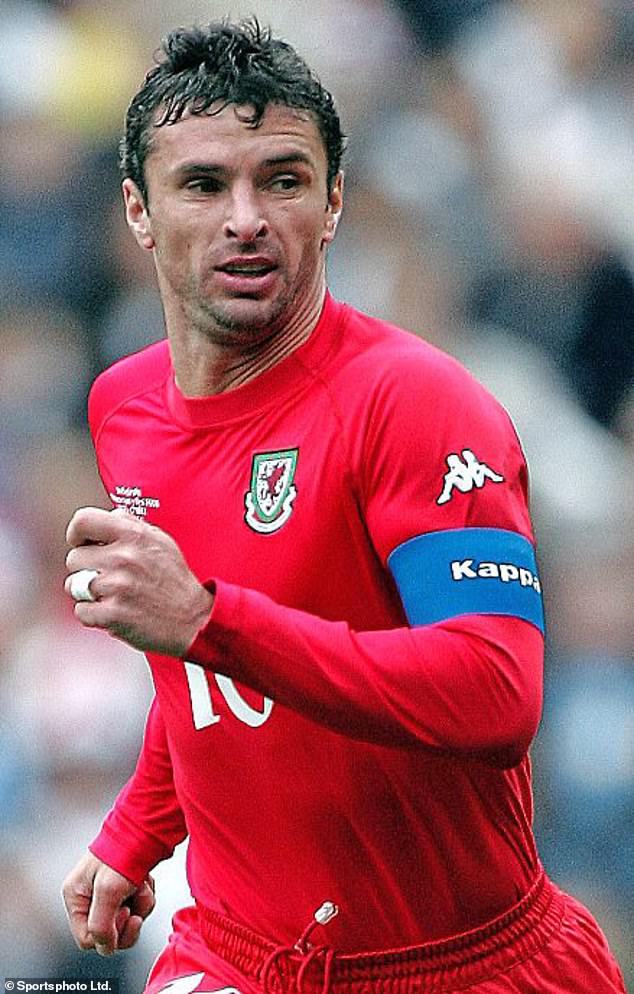 Louise’s husband’s death is the latest trauma to hit her family following the passing of her childhood sweetheart and football icon husband, Gary Speed, 11 years ago

Mother-of-two Louise told the Mail that the death of childhood sweetheart Gary – who took his own life in 2011 – had left her with many unanswered questions, and in the immediate aftermath she suffered two years of ‘struggling to get off the sofa’.

She recalled: ‘It was like being in the worst nightmare possible. There were no answers and no Gary walking through the door again. Nothing was ever going to be right again.

‘I was trudging through life, just functioning. If I could have been anybody else apart from me, for a long time, I would have happily taken it.

‘But we are 10 years on now. It’s a cliché but time is a healer even if it takes years. I have learned that life can be good again, can be great again.’

Revealing that she was in a new relationship, she added: ‘I don’t think you move on from something like this as the same person,’ she said. ‘I have become wiser. I am probably more confident than I was.

‘But I tend to wear a body of armour around me the whole time, if I am honest — so that I cannot be hurt again. I know as we go through life different things hit us and I actually think that I deal with things OK now. Nothing fazes me or scares me anymore.

‘I don’t know if that body of armour has developed over time or whether I deliberately put it on at some point. All I know is that it is there now and it wasn’t 10 years ago.

‘I just want to protect myself from life. I don’t want to feel or go through anything like that ever again. I hope that makes sense.’ 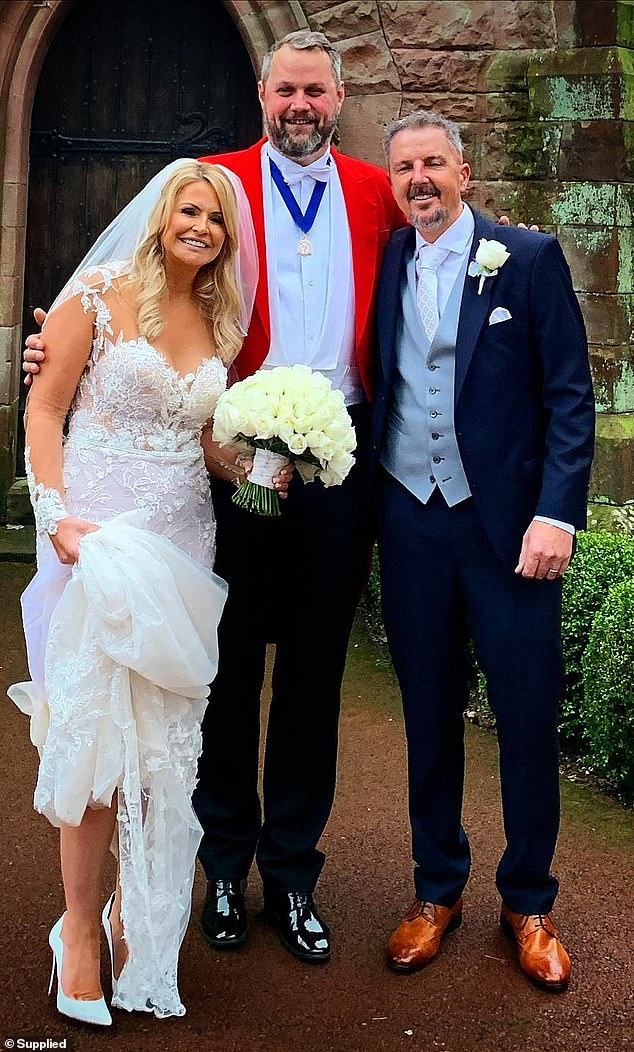 Mother-of-two Louise pictured marrying businessman Quinton Bird (right), a divorced father-of-three, in a lavish ceremony at Peckforton Castle in a room filled with stunning white flowers and candles (pictured, with their toastmaster, centre) 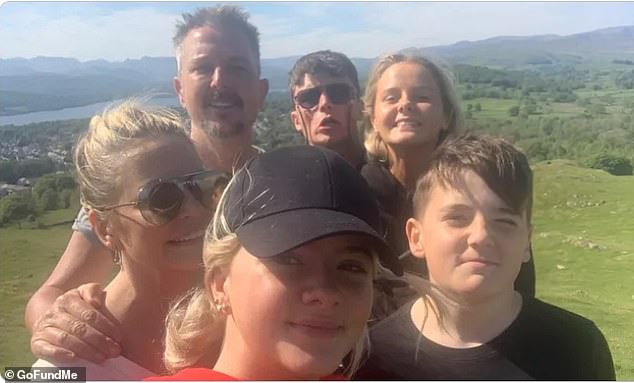 She and friends organised a sponsored walk and camp out over several days in the Lakes in honour of her father and in aid of Brain Tumour Research, which has nearly reached its £5,000 target.

Dedicating the ‘trek to a brain cure’, Claudia wrote: ‘We are a group of students planning to complete a long trek in the Lake District in honour of Quinton Bird and his fight against brain cancer.

‘We will be camping and completing a long walk in his favourite place and would really appreciate any donations you are willing to spare!

‘We will be donating the money to the Brain Tumour Research charity, hoping that we can help towards a cure and hopefully give others a chance that Quinton hasn’t gotten.

Thank you so much for any donations; wish us luck!’

In August, Quinton’s father Roy, 80, who organises an annual Hi-Fi trade exhibition in the north-west called the UK Audio Show, dedicated last year’s event to his eldest son and donated a percentage of ticket sales to the Brain Tumour Charity. 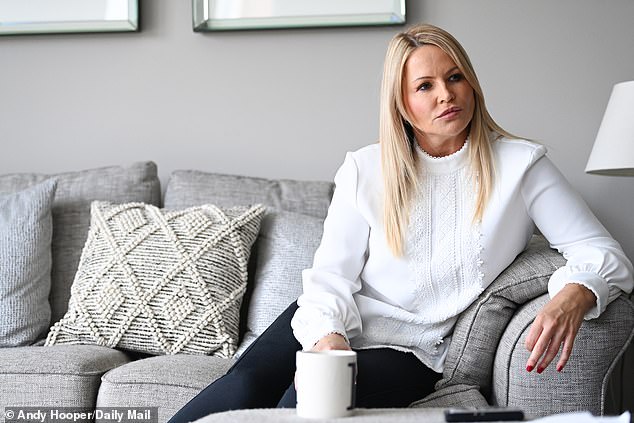 In a moving interview on the tenth anniversary of her former husband Gary’s death, Louise spoke about the trauma of his passing 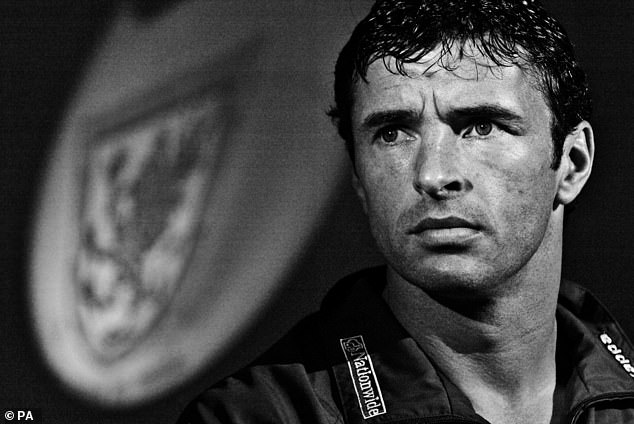 Gary, manager of his beloved Wales at the time, tragically took his own life in November 2011

Roy wrote movingly on the show’s website, describing his grief as ‘beyond words’.

He said: ‘Jenny and I have been blessed with two caring and generous sons who have grown into wonderful fathers and hard-working individuals.

‘Over the years, they formed a wide range of friendships and were never out of work. Both have worked with me harmoniously, which has been a rare personal pleasure.

‘To lose one of them at such a young age is beyond words. Thanks to Quinton, Jenny, Justin, our six beautiful grandchildren, two daughters-in-law, and I are left with a wealth of beautiful and extraordinary memories.’

In her moving interview last year Louise Speed revealed that while going through a box of possessions a few years ago she came across an unsent letter Gary had written to her when he was first at Leeds. In it he admitted to suicidal thoughts. He was 17.

‘That letter was never sent,’ she says. ‘That was the first I knew of it.

‘But my conclusion is that to do what Gary did you must be unwell in your mind. He couldn’t talk, didn’t want to talk.

‘He had all the opportunity through people like the League Managers Association.

‘If anybody in football had come to him with problems he would have sent them off in the right direction. 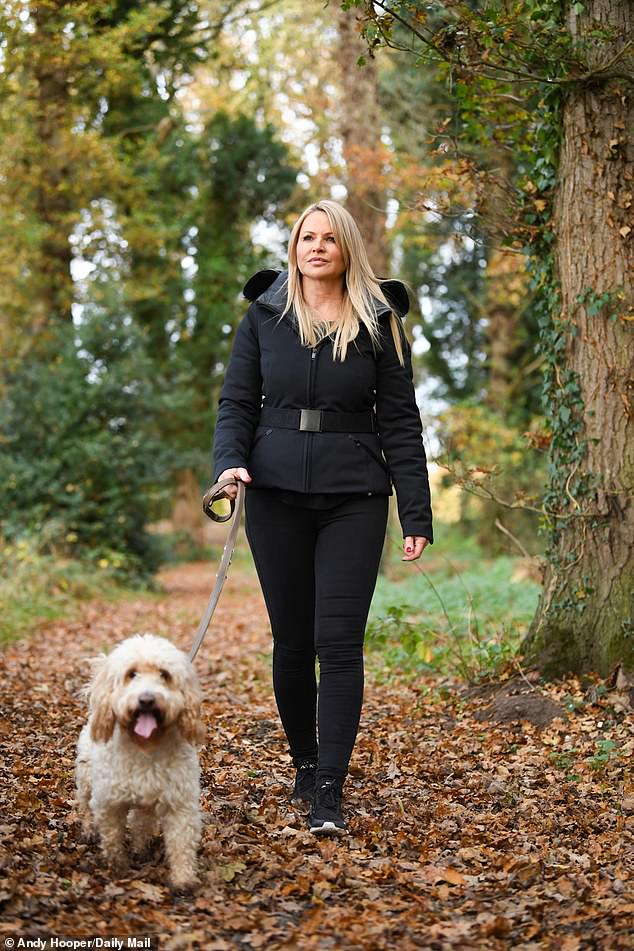 Louise has had her life turned upside down twice, after the heartbreaking deaths of both her husbands, Gary Speed and Quinton Bird 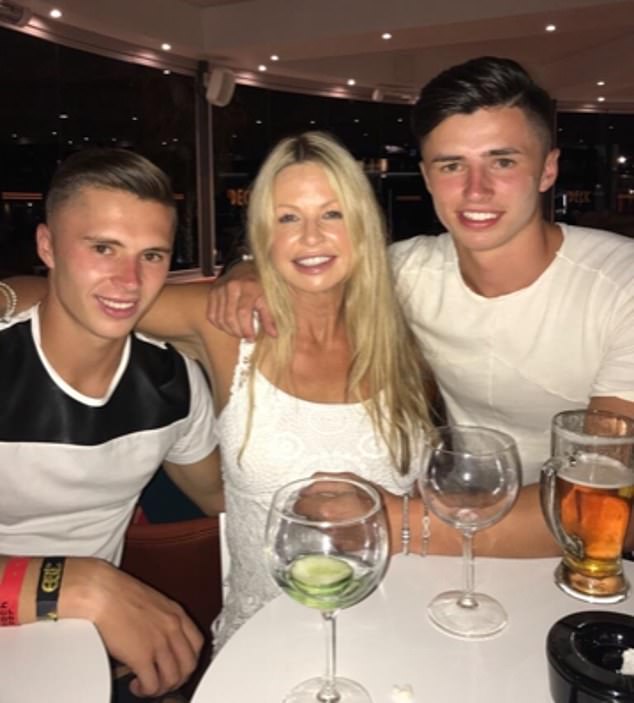 Louise and Gary had two sons together Eddie (left) and Tommy (right) who have both grown up to be good footballers and are now studying in New York, where they live 20 minutes apart 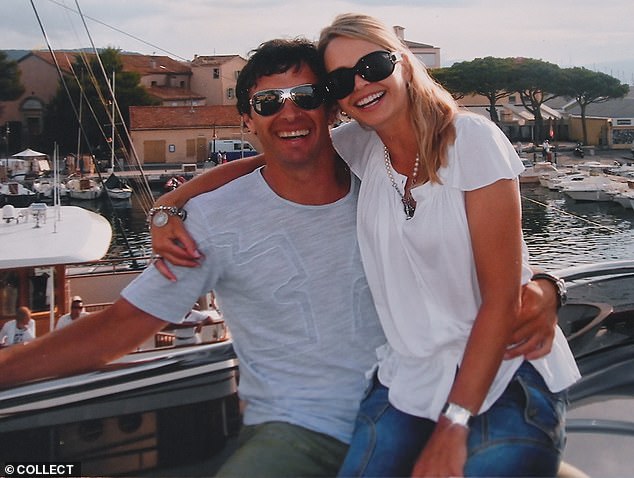 ‘But he didn’t do that for himself. So all I can say or presume is that he didn’t want to or couldn’t talk about whatever it was.’

Gary and Louise’s two sons Eddie and Tommy were just 14 and 13 when they lost their father.

Both went on to study in New York, and are gifted footballers.

‘It hasn’t been easy but we are getting there,’ Tommy told Sportsmail. ‘It has been hard to move on but I have to.

‘I am proud of Dad. I always watch videos of his goals and matches. But I couldn’t be the man I am today without mum.’

Gary and Louise first got together as 15-year-olds in Flintshire, North Wales and their first date was at a tennis club when he forgot his racket.

For 20 years, her life was dominated by Gary’s career in football, first in Leeds where he won the old Divison One trophy under Howard Wilkinson and they got married.

Then she followed him back to the North West to Everton and then to Newcastle. Speed played his later football at Bolton and finally Sheffield United, where he took over as manager in 2010. 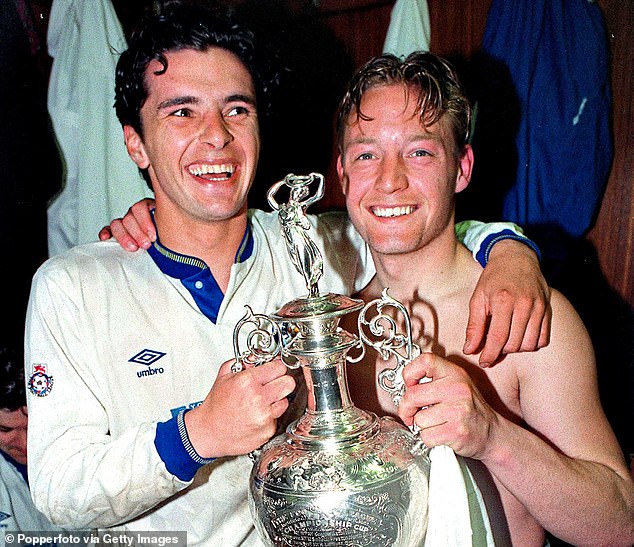 Louise moved with Gary (left) to Leeds, where he won the old Division One title under Howard Wilkinson in 1992 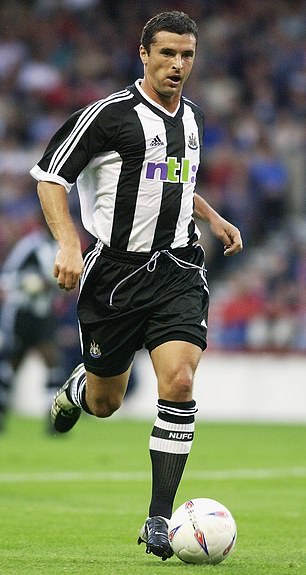 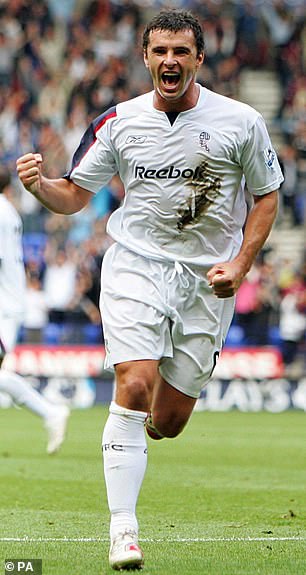 Louise followed him back to the north-west to Everton and then to Newcastle (left). Speed played his later football at Bolton (right) and finally Sheffield United

When, with only four months’ managerial experience he was appointed Wales manager in early 2011, Louise said she was ‘excited’ as it was not as demanding as club football and the couple could plan more, but within a few months, Gary would be dead.

The night before he died, the couple had a row, the inquest heard.

Louise said she had gone for a drive after they had words when they returned from a dinner party, but she could not get back into the house.

She found his body in the garage early the next morning.

Four days earlier Speed, 42, sent his wife a text talking ‘in terms of taking his life’, but she said he had dismissed it because of their children.

She said the text conversation referred to their ‘ups and downs’ but also mentioned ‘how important the boys were’ and about ‘moving forward’.

Cheshire Coroner Nicholas Rheinberg said he could not be satisfied Speed intended to kill himself.

His friend, the former England captain Alan Shearer, who was with him the day before he was found dead, said he had become aware there were issues between the couple.

Shearer, whose family went on holiday with the Speeds, said he told him such issues were normal in a long-standing relationship. 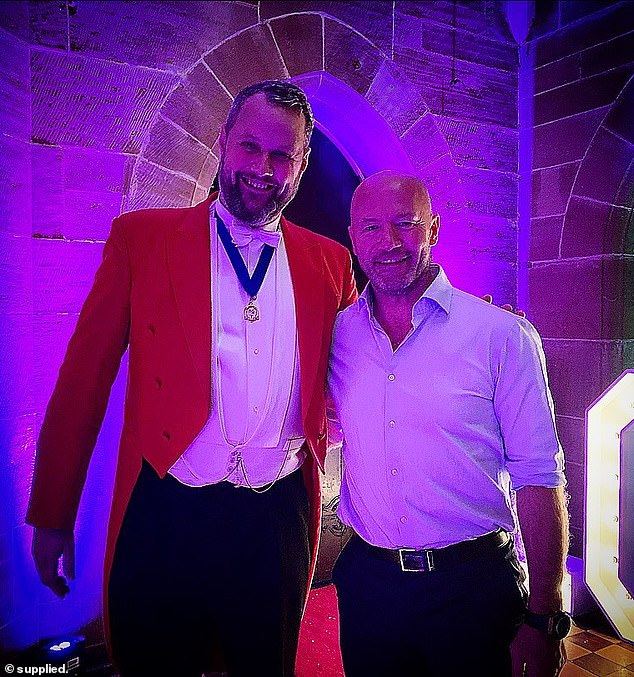 Alan Shearer, who was a close friend of Gary’s after they played together for Newcastle United, was a guest at the wedding of Louise and Quinton in 2021

Shearer last saw him at lunchtime on the Saturday before he died, when Speed appeared on the BBC’s Football Focus programme.

He said Speed seemed fine and was laughing and joking.

The inquest was told about a dinner party hosted by a friend of Speed the night before he died, when he was in good spirits.

Speed had been pushed in the pool with his clothes on, along with other men, and he had tried to push everyone else in the spirit of good fun. He had also been talking of booking a Christmas holiday to Dubai.

Robert Bateman, the taxi driver who took the Speeds home, said everything had seemed normal and they were ‘as normal as they always are’.

The inquest was told Speed had alcohol in his blood, just over the UK drink-drive limit of 80mg.

The court heard that investigators believed Speed had been sitting in his garage. Where he was found was wet from his trousers, following his earlier dip in the pool.

The coroner said what was going through his mind was unclear, but he knew his wife was in the vicinity and perhaps he expected to be found.

Recording a narrative verdict, Mr Rheinberg said: ‘It seems likely that Mr Speed was sitting for some time with a ligature around his neck.

‘It may have been that this was some sort of dramatic gesture, not normally in Mr Speed’s character, but nonetheless, a possibility.’