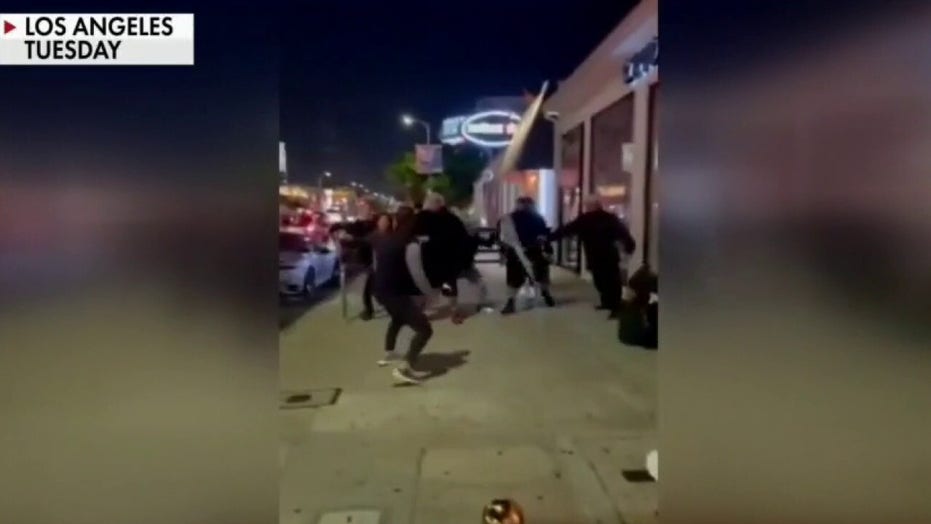 A clip posted on Twitter by former New York State Assemblyman Dov Hikind purportedly showed a group of men kicking and attacking an individual on the ground in the middle of a street before running away.

“Jewish man savagely beaten by Palestinian mob in NYC!” Hikind tweeted Thursday night. “Look at how shameless they are to commit such brazen violence against innocent people!”

Footage captured Thursday night appeared to show a group of men beating another in the streets of New York City.
(Rob Bertrand via Storyful)

The affiliations of the individuals in the footage could not be independently verified.

The NYPD Hate Crimes Unit later tweeted it is “investigating a gang assault of a Jewish man in Times Square that happened this evening.” However, the NYPD couldn’t confirm to Fox News on Friday whether Hikind’s footage was of the incident the Hate Crimes Unit was referring to.

Elsewhere, a video appeared to show a pro-Palestinian protester spitting toward a group of diners eating outside at Benjamin’s Steakhouse in Manhattan.

Waiters then intervene in an attempt to calm down and disperse the raucous crowd. It was not immediately clear what sparked the confrontation.

The incidents happened amid clashes between pro-Israel and pro-Palestinian demonstrators in and around Times Square.

One video captured Thursday shows a device exploding after being thrown at a crowd of people on a midtown Manhattan sidewalk. The New York Police Department told Fox News that two commercial fireworks were thrown from a car and one person suffered minor burns.

Other videos posted by independent journalist Leeroy Johnson show multiple fights breaking out in the middle of Times Square as police try to dispel the scuffles.

An NYPD spokesperson said multiple arrests were made during the protests, which occurred just hours after the cease-fire between Israel and Hamas was announced. 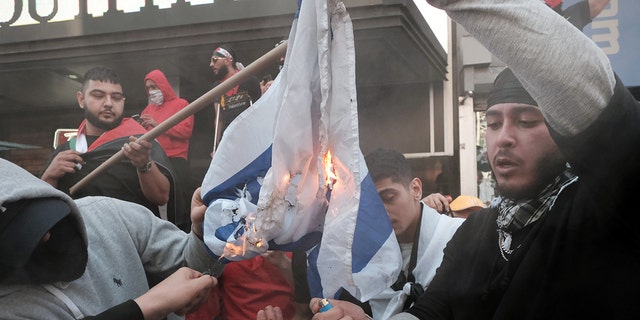 “Anyone know what rock these cowards are hiding under?” he wrote.

In a video he posted himself, Hikind said, “Jewish blood is running in the streets of New York.”

He continued: “People being intimidated. People being assaulted. People ending up in the hospital by those who are filled with venom and hate,” he said. “It’s called anti-Semitism, clearly, and where is the political leadership? Where is the progressive leaders that stand up for human rights and civil rights?”

Ten minutes after Hikind’s video was posted, de Blasio tweeted that “Anti-semitism has NO place in our city,” drawing attention to the NYPD Hate Crimes Unit investigation.

“There’s no excuse for violence against someone because of who they are. None,” the Democrat mayor wrote. “We will bring the perpetrators of this vicious act of hate to justice.” 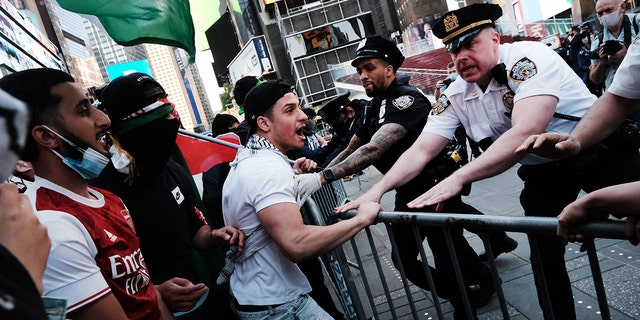 Pro-Palestinian protesters face off with a group of Israel supporters and police in a violent clash in Times Square on Thursday.
(Getty Images)

“Those of all faiths, backgrounds and ethnicities must be able to walk the streets safely and free from harassment and violence,” Cuomo said. “Justice needs to be done and I am directing the New York State Police Hate Crimes Task Force to offer their assistance in the investigation of these attacks.”

Israel and Hamas reached the cease-fire Thursday following 11 days of fighting, which left at least 243 Palestinians and a dozen Israelis dead, according to The Associated Press.

city, New, Pro-Pale, UNREST, York
You may also like: