It has taken the exhumation of 360 bodies and two years of approvals, but the revitalisation of one of Perth’s most historic sites has been given the green light.

The $400 million redevelopment of the Perth Girls School was approved by the state’s land agency DevelopmentWA this week, paving the way for a 742-apartment multi-tower development. 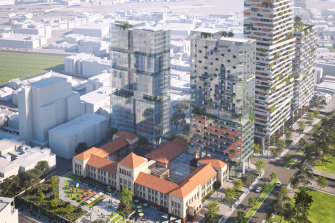 The project sits on top of the Perth CBD’s second-highest point after Kings Park and will include a refurbishment of the old school buildings, converting it into an arts precinct, microbrewery and shopping centre.

The biggest tower could be up to 37-storeys high and across the precinct there would be 100 social housing units, several special disability accommodation apartments, and 500 build-to-rent apartments, an emerging form of housing where properties are owned by the developer and rented out over longer periods.

The site, purchased by developer Australian Development Capital in 2017, also has one of the city’s most unusual histories.

From 2019 to 2020 the state government exhumed more than 360 graves from its northern area over a period of 10 months and reinterred them at Karrakatta Cemetery.

The land was once a part of the East Perth cemetery but had since been converted into a car park.

Lands Minister John Carey said he hoped the development would become a blueprint for affordable housing.

“The introduction of a build-to-rent housing model is a smart way of alleviating pressure on
both private and social rental sectors whilst providing a viable solution to the housing
affordability and supply equation,” he said.

“Perth is now starting to embrace build-to-rent living, and this project is the largest of its kind in WA to date, which will be a huge shot in the arm for this sector.

The Egyptian art deco-style school was built in the 1930s but closed in 1962.

In the past three years, the building has found a new lease on life as a Fringe World hub.

DevelopmentWA is charged with redeveloping key pockets in Perth and the Girls’ School project falls within its Riverside precinct, which covers most of East Perth.

The Riverside precinct has proved to be one of the toughest nuts to crack for successive governments.

It was dealt a major blow earlier this month when developer Lendlease announced it was pulling out of the Waterbank project between Trinity College and the causeway.

The site has become a sandpit after geotechnical difficulties stalled development.

DevelopmentWA and the state government were reassessing what to do with the site.