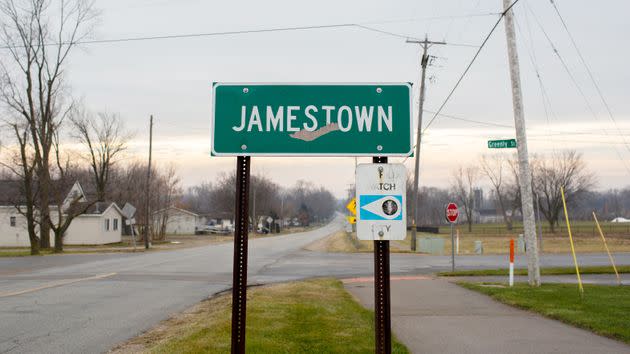 The Patmos Library in Jamestown, Michigan, was Chavala Ymker’s refuge for years.

“We didn’t have the internet, and the library was the only place I had access to books and a space outside of my home,” said Ymker, 23, who was home-schooled while growing up in the small town.

But within a couple of years, that place of escape will probably not exist.

Last year, residents of Jamestown, a township made up of nearly 10,000 people, voted to defund the public library following a push from conservatives to remove the book “Gender Queer” by Maia Kobabe from shelves.

Conservatives across the country have targeted the memoir — in fact, it’s been banned in more states than any other book in America — about Kobabe’s journey to figuring out their own gender identity. They mainly take issue with a passage on consent that contains a page about sex toys, and they falsely claim that just reading the book can make a child change their gender identity or sexual orientation.

“The library is a disaster because of one book,” Ymker said.

The Patmos Library has historically relied on the public funding of a tax called a millage ― and a millage renewal to keep the library operational was on the primary ballot in August 2021. Conservatives’ claims about the library having books with LGBTQ themes picked up steam, and some residents erected signs in their yards about how the tax money was going to be used to “groom” kids. 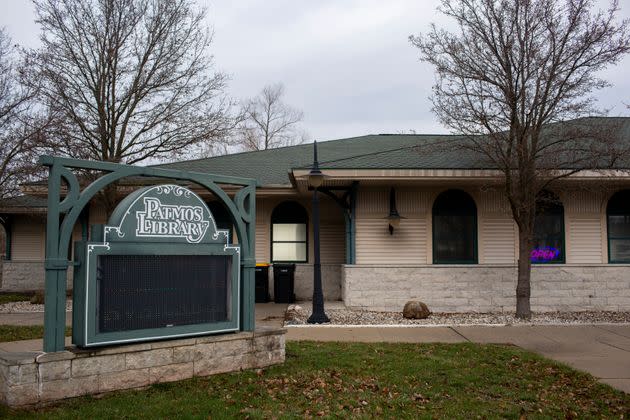 “Some people were handing out fliers that claim librarians are groomers and giving out pornography at the library,” said Salem Sousley, a Jamestown resident and co-founder of Inclusive Ottawa County, a group working to foster diversity and inclusion in the area.

As it stands now, the library will stop receiving funding in the fall of 2024.

Some residents are now scrambling to figure out if they can keep the library’s doors open long-term, while also reckoning with the anti-LGBTQ rhetoric sweeping their town.

The Culture War Comes To Jamestown

Enough donations have poured in to keep the Patmos Library operational for a few months after funding runs out. A GoFundMe that was set up last August raised more than $12,000, while author Nora Roberts donated $50,000 and a Michigan family that had never even been to the library gave another $100,000. But library officials say private donations are not a sustainable option.

Rachel Cain, a member of Inclusive Ottawa County who lives in Jamestown, said she has been invited to join new groups aimed at saving the library and that she’s hopeful that conservatives “are losing their stronghold.”

But there is still a tough battle to fight, and three people who are sympathetic to the right-wing arguments about removing books just started terms on the library board this month. 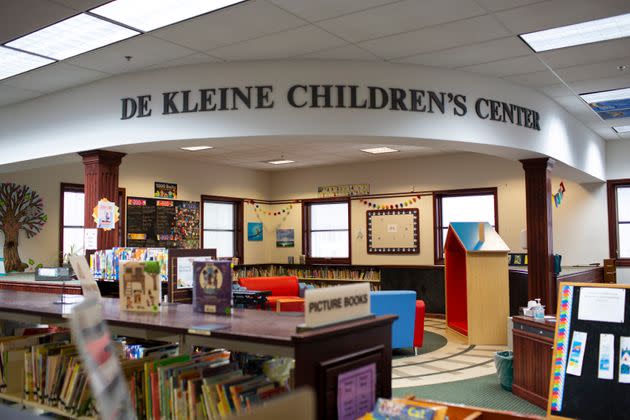 The children's section of the Patmos Library.

As worried as many residents are about the library closing, they’re more concerned about what it signals about where they live. The debate is about much more than removing a book from shelves: The Patmos Library said it even moved “Gender Queer” behind the counter after initial complaints.

“Jamestown is not a friendly place to be right now,” Sousley said. “My wife is trans, and I’m nonbinary. It’s hard living here every day knowing that your neighbors think you’re disgusting and an abomination.”

Jamestown is in Ottawa County, a traditionally conservative area where Donald Trump won about 60% of votes in both 2016 and 2020. The county’s board of supervisors is under review by the state’s attorney general due to several actions it took immediately after being sworn in earlier this month — including eliminating the county’s Diversity, Equity, and Inclusion Office.

The town is just one place where the right’s war on libraries is playing out. Conservatives have targeted the institutions, claiming librarians are trying to indoctrinate or groom children with books with LGBTQ characters and themes. That isn’t true, but the conspiracy theories have spread — with significant consequences, including people threatening public libraries and protesting at family-friend story hours hosted by drag queens.

“This is very reminiscent of what happened with community pools during the Civil Rights Movement,” Cain said. “When white Christian Americans were forced with the possibility of sharing these spaces with Black people, they chose to fill them in [with cement] and deny access to everyone.” 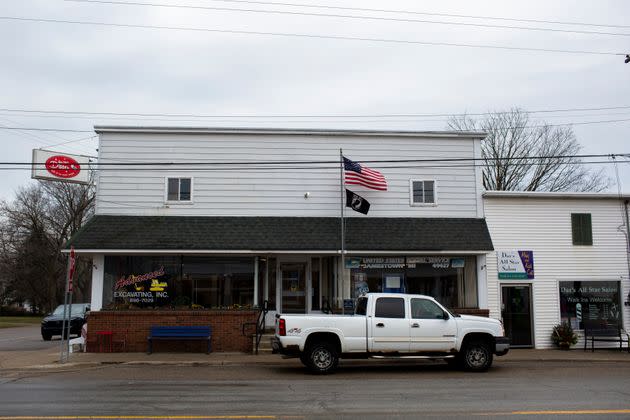 Local businesses and the Jamestown Post Office in Jamestown, Michigan.

Weeks after it was successfully defunded, debate over the Patmos Library continues.

Last month, Shane Trejo, a Michigan GOP official who does not live near Jamestown, posted on Facebook: “Time to shut down the library by force. And then perhaps charge the people writing these checks as accessories for child abuse.” He later told Bridge Michigan, a nonprofit news outlet, that he meant through the force of law.

A few days after the initial comment, the Patmos Library closed early, citing safety concerns. The library did not provide a specific reason to HuffPost for the closure, but local police said they weren’t made aware of any safety concerns that would require the library to close early.

At the next library board meeting, residents were angered about the closure. One woman reportedly accused the library of lying about threats, and another said the library only wanted media attention.

One library staffer, who has not been named publicly, took umbrage with the accusations and addressed the room.

“We have a breaking point. We have been threatened, we have been cursed,” she said, according to a TikTok that went viral. “I’m tired, and I’m tired of all of you. I moved to this town two and a half years ago, and I [have] regretted it every day for the last year.”

For Ymker, who spent so much time at the library when they were younger and made friends there, watching their favorite place turn into the target of hate has been devastating.

“It’s so angering and bone-chilling,” they said. “That was the safe place. The librarians were the people who made me feel important.”