Over 140 tourists launch legal action after illness at Turkish hotel

More than 140 British holidaymakers have launched legal action after being struck down with severe illness at a luxury five-star resort in Turkey.

Dozens of families claim they contracted a sickness bug which ruined their holidays while staying at the Mukarnas Resort and Spa, in Antalya – a resort city on Turkey’s Mediterranean coast.

Tourists reported being served lukewarm buffet food which was surrounded by flies, ‘disgusting’ toilets, a dirty pool and other unsanitary conditions throughout the hotel.

Now more than 140 people have instructed lawyers to investigate after suffering severe gastric illnesses during what should have been a dream holiday.

Among those affected were Julie O’Sullivan, 45, her partner Gary Hunt, 46, and her two children Harry, 16, and 15-year-old Hannah.

They travelled to the resort on May 29 through tour operator Jet2holidays – but within the first few days of their week-long trip, the family fell ill.

Ms O’Sullivan and Mr Hunt, who are both delivery drivers, and the two children all began suffering from stomach ache, vomiting and diarrhoea. 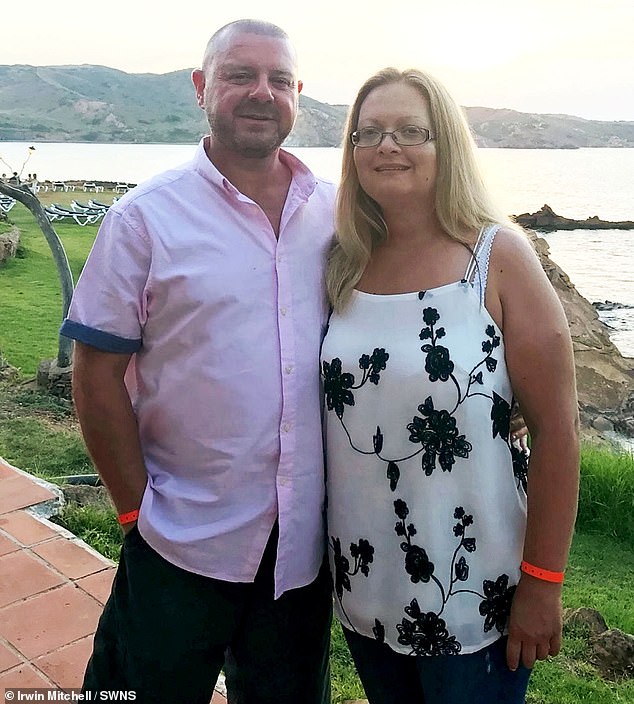 Julie O’Sullivan, 45, and her partner Gary Hunt, 46, (pictured) are among 140 families who have launched group legal action after being struck down by a sickness bug while staying at the Mukarnas Resort and Spa, in Antalya, Turkey

Ms O’Sullivan, of Bromsgrove, Worcestershire, said: ‘We’d been looking forward to going away for such a long time, but just two days in, Harry and I fell ill.

‘It came on all of a sudden and for the first 24 hours, the vomiting and diarrhoea was constant. Then Gary and Hannah got it.

‘It was awful, as we spent most of our holiday in our room, unable to enjoy any day trips.

‘The whole holiday was a complete disaster and it’s still upsetting to think about it now.

‘When I think back, there were flies in the restaurant area and a lot of the food at the buffet was left uncovered, which allowed flies to get to the food.

‘I also noticed that when children were being sick outside, it was often left there for hours, or just swept into the drain or pool, meaning that guests were sometimes accidentally standing in it.

‘The hand sanitiser in the machine on entry to the restaurant was often also empty.

‘The toilets were also left in a disgusting state, and I complained about this several times, but I never saw them cleaned during the day even though people were being sick and having diarrhoea. 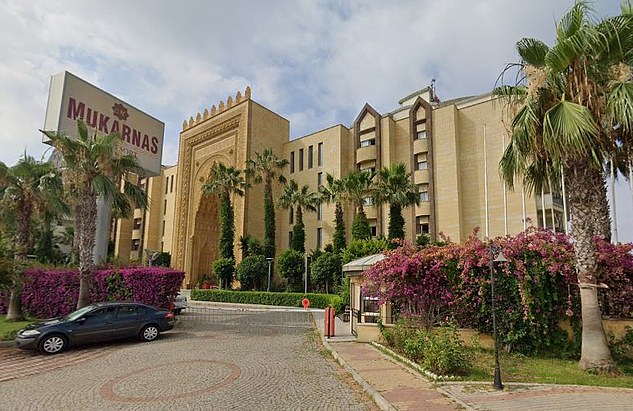 Tourists reported being served luke-warm buffet food which was surrounded by flies, ‘disgusting’ toilets, a dirty pool and other unsanitary conditions throughout the Mukarnas Resort and Spa (pictured)

‘We feel this is totally unacceptable for a five-star resort.’

Hannah, who is still at school, fortunately began to feel better by the time the family arrived back in the UK on June 6, but the others continued to suffer, with Ms O’Sullivan contacting their GP on behalf of the family.

Upon returning to the UK, Harry, who was in his final year at senior school, had his GCSE exams, which were ‘extremely difficult’ to sit due to his ongoing gastric symptoms.

Ms O’Sullivan and Harry continue to suffer with ongoing issues, several months after their holiday.

They are undergoing various tests with their GP and have been prescribed medication to help ease their symptoms.

Julie added: ‘We can’t turn back the clock and change what we went through, but we want some answers and to know that something’s being done to help stop it happening again in the future.’

Jennifer Hodgson, an international serious injury lawyer at Irwin Mitchell representing those affected, including Ms O’Sullivan and her family, said: ‘Julie, Gary and their family are among a large number of holidaymakers who stayed at this resort and who were struck down by illness. 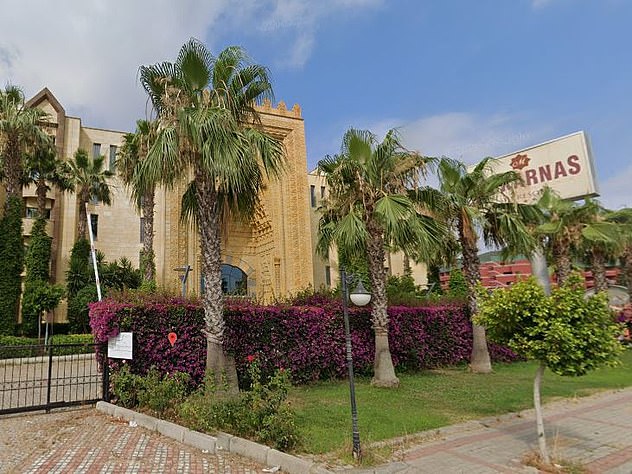 ‘All cases of holiday illness are concerning; however, it’s particularly worrying that such large numbers of people have reported falling ill, the majority of whom have reported similar symptoms.

‘We now represent more than 140 people who stayed at the Mukarnas Resort and Spa this summer and understandably have many questions about how they fell ill.

‘We’re now investigating their concerns and are determined to obtain the answers they deserve.

‘If any issues are identified, we urge that lessons are learned to help prevent other holidaymakers falling ill in the future.’

Other families who also fell ill at the same resort include couple Lauren Scott, 27, and James Beard, 42, of Wigan, who reported seeing poo in the swimming pool.

The couple visited the resort with their daughters Maddison, 10, Georgia, eight, and six-year-old Olivia on July 9 and were all struck down by illness. 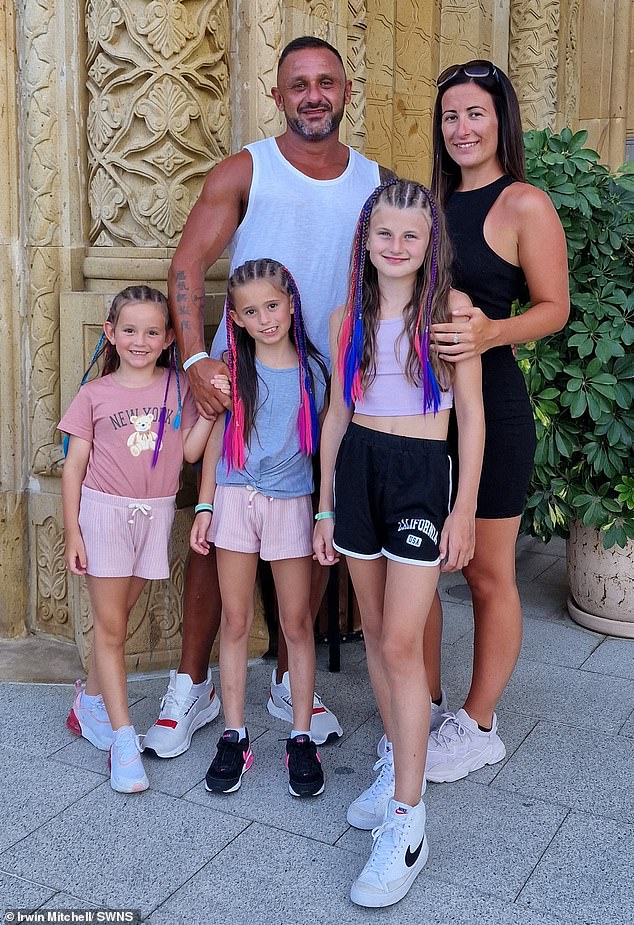 Lauren Scott, 27, and James Beard, 42, of Wigan, and their three daughters (pictured) were all struck with illness when they stayed at the resort in July

After being told they would have to pay nearly a thousand pounds for tests, the family returned home to the UK on July 24.

The couple continue to suffer gastric issues after their return, with Ms Scott also suffering from night sweats.

Mr Beard said: ‘We were all really excited about going to Turkey. It was our first holiday away as a family and we’d been counting down the days.

‘Sadly, the resort was a huge let down. We were shocked at the standards and the number of holidaymakers who were falling ill.

‘The food served was never particularly hot and was served lukewarm. The pool was also dirty and we didn’t see it being cleaned throughout our stay.

‘On one occasion there was poo in the hotel pool, and I was shocked when the lifeguards tried to remove it with their hands and didn’t close the pool or try to clean it.’

Another complainant was Mark Clifton, 38, an electrician from Yeovil, Somerset. He and his partner visited the same resort between July 15 and July 25 with her two children.

Just three days into their trip Mark was unable to get out of bed. 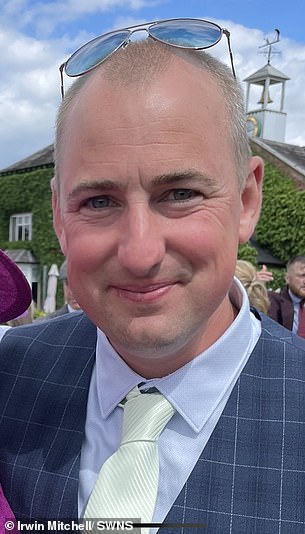 Another complainant was Mark Clifton (pictured), 38, from Yeovil, Somerset who said he started suffering from stomach cramps, diarrhoea, sweats and a fever just three days into his trip

After suffering from stomach cramps, diarrhoea, sweats and a fever he went to see the hotel doctor – who was unavailable.

He continued suffering from stomach cramps after he returned home.

Mr Clifton said in August: ‘I was really shocked by the number of people I heard were ill at the resort. Some staff tried to say it was heatstroke, but I think it was more than that.

‘I remember thinking the food at the hotel was lukewarm, and I didn’t once see the pool being cleaned or tested while I was there.

‘My partner and her children also fell ill, but their symptoms fortunately weren’t as bad as mine. More than two weeks on I’m still not 100 per cent and I’m not sure how long this will go on for.

‘While I can’t turn back the clock, I just want to know why this happened.’

Mukarnas Resort and Spa has been contacted by MailOnline for comment.