A 39-year-old man has been arrested and charged after he allegedly slashed the neck of another man in his 20s with a knife in a seemingly random attack in Northbridge.

On Friday night at 11.45pm police officers on patrol in Northbridge found a 29-year-old man bleeding from the neck, after being struck by a knife near the intersection of Roe Street and William Street. 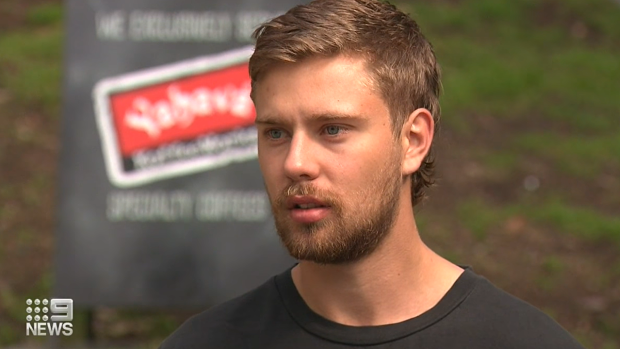 Witness to the Northbridge attack Josh Tonkin said it had happened fast and that the man was a stranger.Credit:Nine News Perth

He had been on a night out with friends from work, who told Nine News Perth their group had been targeted at random.

“He followed us across the street, kept getting more and more agitated,” witness to the horrifying attack Josh Tonkin said.

“He wouldn’t leave us alone so we pushed him and told him to move on. Then he pulled a weapon out, cut my girlfriends workmates throat and ran off.

“He was just holding [his neck] like he had a sore throat, it happened so quick.”

St John WA attended the scene and the injured man was taken to Royal Perth Hospital. His injury was not life-threatening, and he underwent surgery in hospital.

On Saturday evening, a 39-year-old man was arrested at a residence in Innaloo and has since been charged by Perth Detectives.

He has been charged with intent to do grievous bodily harm unlawfully wounds another, common assault and possession of cannabis.

Police have confirmed that the common assault charge is related to a second victim, a 23-year-old man, who was also present at the time of the attack.

The 39-year-old Noranda man was refused bail and is due to appear in Perth Magistrates Court on Sunday.