A charity shop owner has refused to remove a ‘distressing’ mannequin from outside his shop – despite people reporting it to the police after believing it was a dead body.

Staff at Amaze – a charity shop launched to support homeless people – placed the dummy in a sleeping bag in Malvern, Worcestershire, to highlight the plight of rough sleepers in the area.

But the stunt was criticised by local residents who thought the mannequin was a real person, with passers-by offering it coffee and food.

Owner and co-founder of Amaze, Chris Lee, said he was visited by police officers who told him to ‘remove it’.

West Mercia Police said the mannequin ‘could easily have been mistaken for a dead body’ and asked for the display to be ‘adapted’ so it could avoid causing ‘distress to the public’ or ‘unnecessary calls to the police’. 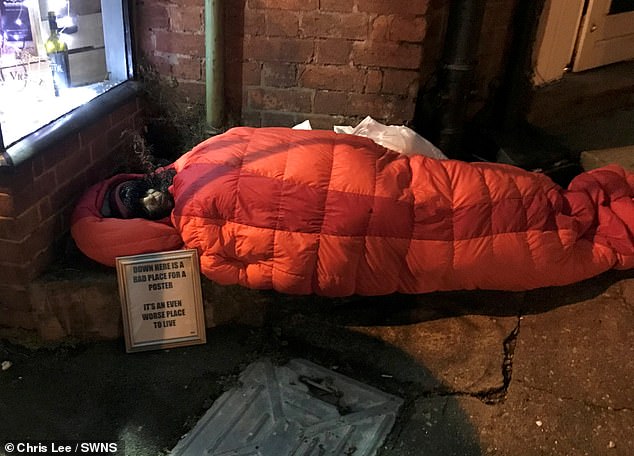 Staff at Amaze – a charity shop launched to support homeless people – placed a mannequin in a sleeping bag in Malvern, Worcestershire, to highlight the plight of rough sleepers in the area

The mannequin has been placed in a red sleeping bag, next to a drain and gutters, alongside a sign saying ‘down here is a bad place for a poster, it’s an even worse place to live.’

The campaign had backing from the Mayor of Malvern, councillor Nick Houghton, who helped launch the project last Saturday.

The owner and co-founder of Amaze, Chris Lee, said: ‘We did this to create awareness around homelessness.

‘The mannequin – not a most convincing one at that – is sleeping on the street with the sign next to it.

‘On Tuesday, December 21 at about half past five, I was approached by a police officer and told to remove it.

‘They said it was “too distressing” but I responded saying that the plight of homelessness is distressing.

‘The display is there to evoke comment and start a conversation, but the police officer thought that it was too shocking an image and could cause an accident.

‘It’s just our way of saying please be aware and help the homeless if you can.’

Mr Lee said he has ‘no intention’ of moving the mannequin, despite the police visit, arguing it is ‘making people aware and making people think’.

Pointing to the support shown by councillor Houghton, he said: ‘(He) thought it was a great idea.’

Mr Lee added: ‘This was only ever to raise awareness; we were never asking for money or donations.

‘I contacted the mayor and they told me not to worry about it.

‘The majority of responses have been really nice and kind, some people have even thought it was real and brought coffee and food.

‘It is only the police who are unhappy with it.

‘The really sad thing is that we often find people huddled in the doorway wanting help.

‘It’s the reality of life, there is a number of people suffering.’

A spokesperson from West Mercia Police said: ‘The officer had spoken with the manager to highlight that the mannequin looked very life-like and could easily have been mistaken for a dead body given its appearance and that this had been the case with us receiving such feedback.

‘This was also likely to cause both some distress to the public and unnecessary calls to police so it was requested the display be adapted so as to not cause either of these issues.’

The issue comes three years after a rough sleeper named Joby Sparrey was found dead in the doorway of a clothing shop close to Amaze’s doorstep on Christmas Day in 2018.