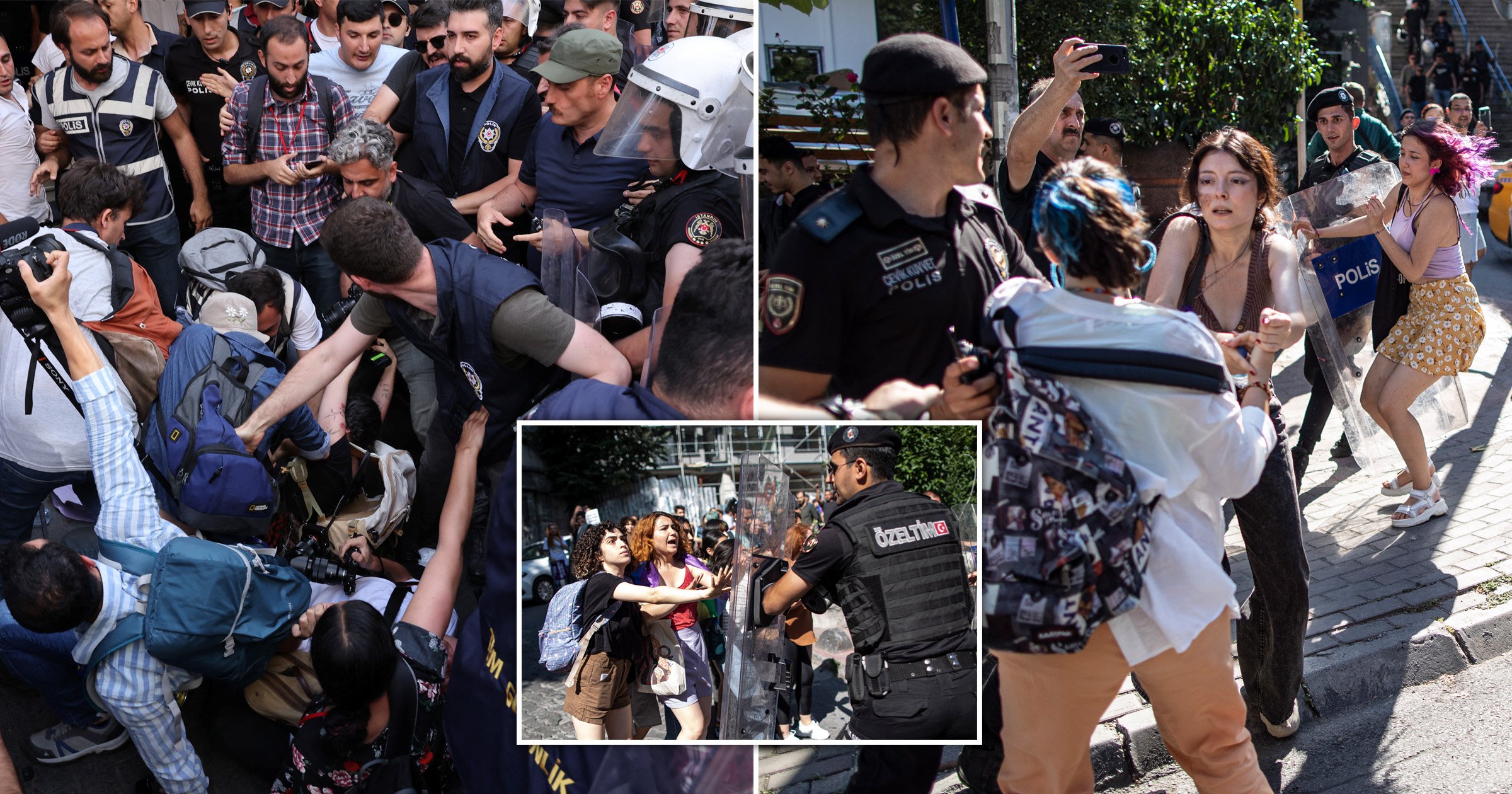 Around 200 people have been arrested ahead of a planned Pride protest in Istanbul.

Pictures showed people being frisked and loaded into buses, including a press photographer from news agency AFP.

A journalist union in the region also said that people had been beaten up by police.

Local residents banged pots and pans from their windows and balconies in a show of support for the marchers as a police helicopter circled overhead.

The police’s reaction to the event has been heavily criticised by Turkish and international activists as well as human rights groups.

Milena Buyum of Amnesty International said: ‘All those detained solely for their participation in Pride must be released immediately and unconditionally.’

Diren said: ‘We are banned, prevented, discriminated and even killed at every second of our lives.

‘Today, it’s a very special day for us to defend our rights and to say that we do exist.’

‘Police violence is aimed to stop us but it is not possible. You will be unable to stop the queers.’

On Friday, Council of Europe commissioner for Human Rights, Dunja Mijatovic, had urged Turkish authorities to let the demonstration go ahead and to ensure the safety of the marchers.

‘The human rights of LGBTI people in Turkey need to be effectively protected,’ she said in a statement.

Although homosexuality has been legal throughout the period of the modern Turkish republic, LGBTQ+ individuals say there is regular harassment and abuse.

Turkey previously was one of the few Muslim-majority countries to allow Pride marches, with an annual event being held in Istanbul since 2003.

The last event in the city to go ahead without a ban took place in 2014 and drew tens of thousands of participants in one of the biggest LGBTQ+ events in the majority Muslim region.

When the march was banned the official reason given was security concerns.

In recent years, the government has adopted a harsh approach to public events by groups that do not represent its religiously conservative views.

Large numbers of arrests and the use of tear gas and plastic pellets by police have accompanied Pride events.

Counter-demonstrations by nationalists and Islamists, who claim the LGBTQ+ community is a danger to ‘Turkish values’, have also threatened marchers.

And we’ve got some great names on board to help us, too. From a list of famous guest editors taking over the site for a week that includes Rob Rinder, Nicola Adams, Peter Tatchell, Kimberly Hart-Simpson, John Whaite, Anna Richardson and Dr Ranj, we’ll also have the likes Sir Ian McKellen and Drag Race stars The Vivienne, Lawrence Chaney and Tia Kofi offering their insights.