Follow
Home » World News » PRITI PATEL: We have a proud history of helping those in need

PRITI PATEL: We have a proud history of helping those in need

PRITI PATEL: We have a proud history of helping those in need but other countries must do more

Over the past few weeks, the Government has been engaged in huge efforts to help those who have worked with us in Afghanistan during the past 20 years to make the country a better place.

We have evacuated more than 14,000 people from Kabul – double the number we originally thought possible.

It has been a major cross-government operation involving the tireless work of our military, our Border Force team and civil servants on the ground in Afghanistan and in Dubai.

Aside from British nationals and vulnerable Afghans, we have provided a safe passage to the UK for 8,000 people since August 13 under our Afghan Relocation and Assistance Policy (ARAP) scheme.

The scheme was set up to help the brave Afghans who worked with our soldiers and diplomats, along with their immediate families. For that, we owe them an incalculable debt of gratitude. 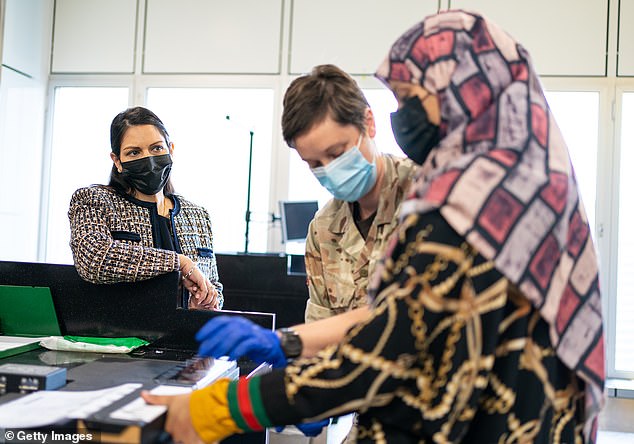 Last week I visited one airport where planes of evacuees have been arriving and met some of the vulnerable people and their families we are bringing to the UK to protect and resettle.

I also met the Heathrow airport staff who are working with Government teams to support these arrivals, the Border Force officials who have transformed part of Terminal 4 into a makeshift reception centre, as well as the military and law enforcement partners doing security and biometric checks.

Sadly, the appalling events at Kabul airport have proved that there are some people in Afghanistan who are a serious threat to our safety and national security.

It has been a government priority to protect this country’s security throughout the evacuation process – using thorough and rigorous checks on all evacuees.

The authorities are empowered to take immediate action if anyone is assessed to be a risk to Britain.

I also met medical staff providing care for those in need as well as Red Cross volunteers. I thanked them for their care and compassion.

But what I shall remember for a very long time are the humbling stories of some of the families who had just arrived.

They had flown here with little more than the clothes they were wearing.

Many had been in fear for their lives in Afghanistan because they or someone in their family had worked for Britain.

Our staff wanted to reassure them of the Government’s commitment to provide a safe haven where they can build new lives.

I longed to be able to give some of the nervous children a comforting hug.

It is vitally important to provide these families with the reassurance that, across government, we are doing everything possible to help them start a new life in safety in the UK.

The United Kingdom has a proud history of offering sanctuary to those in need, and I know that communities and charities all around the country will want to play their part in providing a warm welcome.

At such times, we see the very best of humanity on display.

In addition to those welcomed here under the ARAP scheme, a bespoke resettlement scheme will welcome an additional 5,000 vulnerable Afghan citizens in its first year, potentially rising to 20,000 over the long term.

But the sheer scale of the Afghan crisis shows how much we need other countries to do more.

Britain has led the world at times of humanitarian crisis and when people have fled persecution and oppression. Now, our global allies must join to support those in need.

At the forthcoming G7, I will reiterate this message to our partners.

Meanwhile, Britain will not be found wanting in this darkest of hours. We will continue to extend the hand of friendship to those in need and do right by those who have previously done right by us.