Follow
Home » World News » Protests in China are nothing new, but these are different

The extent of public anger and protests we have seen erupt across at least 18 Chinese cities over the past week is something rarely seen since 1989 in Tiananmen.

Frustration and exhaustion from nearly three years of COVID lockdowns have tipped many ordinary middle-class Chinese citizens over the edge. The sense of desperation emanating from being locked up to the inability of sustaining livelihood is palpable.

There is a real thirst and curiosity from those outside looking into China to understand what will become of the protests and protesters. The ultimate question for many is the extent to which such discontent will lead to systemic change. However, it is prudent to take a few steps back to look at the situation and the nature of the protests. 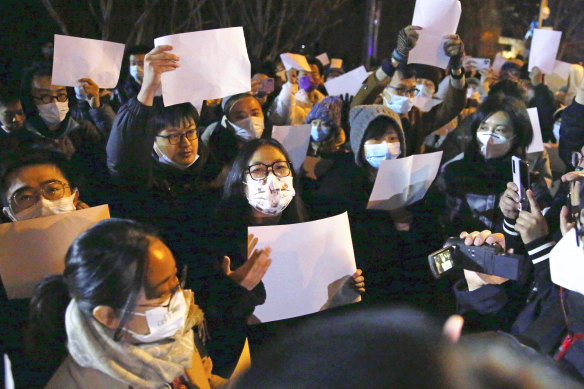 China is not immune to protests despite Xi Jinping’s authoritarian rule. In the past few decades, we have seen tens of thousands of contentious protests each year, provoked by the likes of labour disputes or confiscation of farmland, or collective action among ethnic minorities in Tibet and Xinjiang. There have been 701 documented labour strikes and protests this year with the construction industry accounting for almost half.

Despite the number of labour protests and strikes recorded in the past 11 months, the message and concerns have rarely crossed to other social areas. Moreover, labour protests have rarely galvanised workers across different industries but have largely remained location or factory specific. 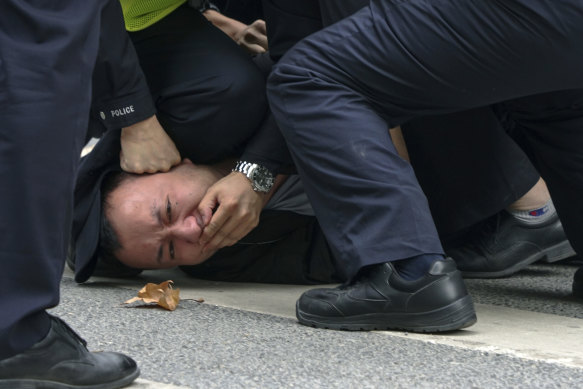 Police pin down a protester on a street in Shanghai on Sunday.Credit:AP

Issue-based and localised protests in China often target local governments as the culprits, for their heavy-handed measures in dealing with social anxieties or at the other end of the spectrum, their lack of responsiveness. My research has shown, subpopulation groups such as China’s rural-to-urban labour migrants have often sought recourse for their problems through the formation of self-help groups and/or accessing assistance provided by non-governmental organisations.

Often, migrant workers will bypass the local government and petition directly at the doors of the central government because local governments are seen as the source of grievances or there is little trust placed in the competencies of local officials.

Public demonstration of political discontent is rare. Such protests irrespective of their size are quickly stamped out. For the most part, Chinese citizens express general satisfaction with their government, as longitudinal research shows. That is until COVID.

The protests we have seen this past week reflect this central-local government dichotomy. Although the central government’s tough zero COVID policies link the different sites of protests, it is not the only grievance that has prompted protesters to take to the streets.

In Zhengzhou, where we have seen weeks of protests, factory workers have couched their more specific set of complaints in the larger issue of COVID lockdown measures. Workers in Zhengzhou are protesting about the severe restrictions on their freedom of movement and their unpaid bonuses. As noted, before, labour protests do not often gain broad buy-in from the public and most certainly when it is company specific.

The fire in an apartment block in Urumqi leading to the deaths of a dozen people was the catalyst for the protests. Residents were outraged that first responders arrived three hours after the flames were spotted. Local firefighters attributed their delay to strict COVID measures. Nevertheless, the local authorities are seen as ineffectual.

Students across university campuses have also shaped their concerns around COVID lockdown policies. As classes moved online, many university dormitories have shuttered leaving many students with little to no option of finding accommodation as their hometowns refuse to let them return for fear of COVID entering the local community.

As the situation evolves, we now see the central government blaming the local governments. However, this may be a strategy for both levels of government to put an end to the protests, by addressing these grievances as they relate to a particular location, whether that be re-opening university dormitories or pressuring companies like Foxconn to live up their end of the labour contract. By addressing issues at the margins, rather than zero COVID itself – something that is unlikely to disappear any time soon due to the very real disproportionate impact on the health system – it is possible such protests will dissipate.

We should not discount more repressive measures to end the protests if the concessions offered do not work. However, when repression fails it can escalate the situation thus pitting the government’s security forces against its people which is politically costly and leads to reputational damage both at home and abroad. This is perhaps the least favoured option but repression, as we have seen in China’s modern history achieves results and ultimately, stability at the cost of certain freedoms.

In assessing what happens next, we must also bear in mind the appetite of individual Chinese citizens in sustaining their protests. The questions many will ask include will the potential gains outweigh the costs? And what are these costs? China’s surveillance state is unmatched in its coverage and thus the personal costs of undertaking such protests may be too great to bear.

Fear, exhaustion and with winter conditions setting in may see the protests wax and wane, but the actions of the security state may further flame protests. The world awaits with bated breath.

Dr Jennifer Hsu is a writer, academic and researcher at the Lowy Institute.

US democracy: “Democracy is a politics of frustrated winners and good losers.” If an increasing number of Americans find loss intolerable and, therefore, vanquishing opponents by any means necessary morally justifiable, radicalisation is the result – Waleed Aly

A winter war: Both the Russian and Ukrainian strategies are predicated on a continuation of hostilities over the coldest months. However, they will have very different approaches – Mick Ryan

The royal family: The Crown is in its fifth season and much debate has centred around whether it is historically accurate or complete fiction. What we do know is that the series does a terrible thing to the royal family – it humanises them – Jacqueline Maley