Follow
Home » World News » This woman leads the happiest nation on Earth. What will Albanese ask her?

The leader of the nation ranked as the happiest in the world arrives in Australia on Thursday, and it presents a great opportunity.

Prime Minister Anthony Albanese will meet his Finnish counterpart, Sanna Marin, on Friday and will surely be interested to learn more about Finland’s success and how it might apply to Australia.

Finland has led moves towards emphasising wellbeing in economic decisions, of the kind that Australian Treasurer Jim Chalmers has commenced since Labor took office in May. 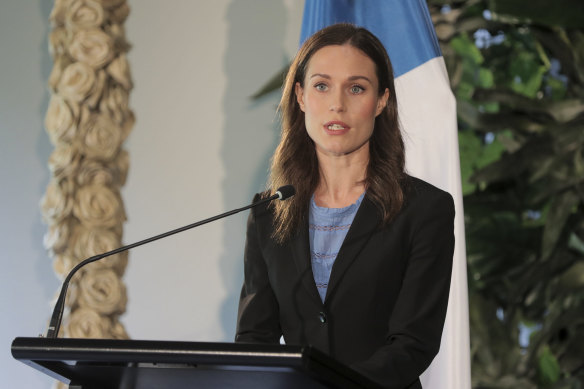 Finland is famous for its well-resourced schooling and equality in education funding. This contrasts with the considerable inequalities that remain in Australian school funding almost a decade after the Gonski review’s call for change. Those recommendations lie dormant.

Finnish experience shows that equality between schools – a mutual striving for all schools to be good schools – is the best way to lift a nation’s educational excellence. That collective striving relies on valuing, trusting and fairly rewarding the teachers in those schools.

People will obviously be happier if allowed to pursue what they really want to do with their lives, rather than be pushed into an occupation their parents or others deem to be of suitable status. Encouraging those who choose different vocational paths from a professional career, for instance, contributes to Finland’s happiness. Being in a trade such as a plumber, electrician or carpenter is more valued than here.

Students in Finland are encouraged to follow their natural curiosity. We learn most effectively through trial and error. In Australia, there is too great a requirement for competitive high-stakes testing. This leads to the recitation of pre-prepared “right answers”. It causes anxiety for young people, but it also fails to foster creativity and innovation.

Finland has a remarkable history of innovation, due in part to its strong investment in research and development, which has helped it establish niches of design and production excellence for export. The best-known example is the Nokia company, which dominated global mobile phone production for more than a decade. Australia can learn from this approach to rectify our own underinvestment.

Gender equality is also advanced in Finland. Prime Minister Marin has spearheaded initiatives to increase paternity leave. Last year, paid parental leave in Finland was extended to 14 months, of which almost seven months is allocated for fathers. While some of that paternity leave can be transferred to mothers, most has to be taken by fathers for the family to gain the full entitlement. This “use it or lose it” minimum requirement is the only proven way to lift men’s role in caring for their children.

The new Australian government has made a welcome decision to extend paid parental leave to six months. However, it still needs to demonstrate how fathers will be encouraged to actually take that leave. That will support more mothers to return full-time to the workforce. The proportion of women in full-time jobs in Australia is 20 percentage points below Finland.

Finland is also the least corrupt country in the world, according to Transparency International. It stands at equal No. 1 on that index, alongside Denmark and Jacinda Ardern’s New Zealand, who Sanna Marin met on Wednesday. Australia languishes at No. 18, underlining the need for the National Anti-Corruption Commission being legislated in our federal parliament this week.

Finland has consistently pursued social democratic policies, the kind that Australia needs to revive if it is to boost its happiness, educational achievement and gender equality. Marin’s visit should provoke us to ponder the question: Do we want to become even more like America, or be more like Finland? We are poised between those two poles on so many indicators.

Measurements have shown, for instance, that an American with tertiary-educated parents is almost seven times more likely to enter tertiary education than a fellow citizen whose parents had no post-school education. In England, the difference is six times and in Australia, it is four times. In Finland, however, you are almost no more likely to get a tertiary education simply because your parents did. Finland has thus created extraordinary intergenerational opportunities for people from less privileged family backgrounds, based on genuine merit.

Australia can learn from this to further realise the full talents of our people to achieve what they want according to their interests and abilities. Our success, indeed our happiness, need not be determined by inherited advantage.

Dr Andrew Scott is a professor of politics and policy at Deakin University and convenor of the Australia Institute’s Nordic Policy Centre.

More from our award-winning columnists

An anxious nation: Mortgage stress, COVID burnout, extreme weather and the cost of living crisis – no wonder Australia’s status as the “lifestyle superpower of the world” is under threat – Nick Bryant

The future of democracy: Australia must learn from America’s descent into extreme inequality, which has led to deep discontent. It must also do more to civilise “social” media – the great amplifier of hate – Peter Hartcher

Behind the interview: Shane Warne may have been the greatest bowler legendary interviewer and cricket lover Michael Parkinson has ever seen, but he’s not his favourite interview – Peter FitzSimons