Headteachers are considering implementing three-day weeks at schools as they struggle to deal with booming energy costs and staff salaries rising faster than their budgets will allow.

Across the country, school heads are holding ‘crisis meetings’ with trustees and board of governors over the summer holidays as they plan ahead.

Teacher pay rises set to be awarded in September will add another pressure on schools’ already-straightened finances, The Telegraph reports.

Energy costs in some areas are predicted to rise by 300 per cent.

A chief executive of one of the leading academy trusts in the country said: ‘Shorter school days, fewer after school clubs and enrichment opportunities and draconian restrictions on energy usage will become a reality for all trusts and the situation is particularly challenging for smaller trusts and standalone schools.’ 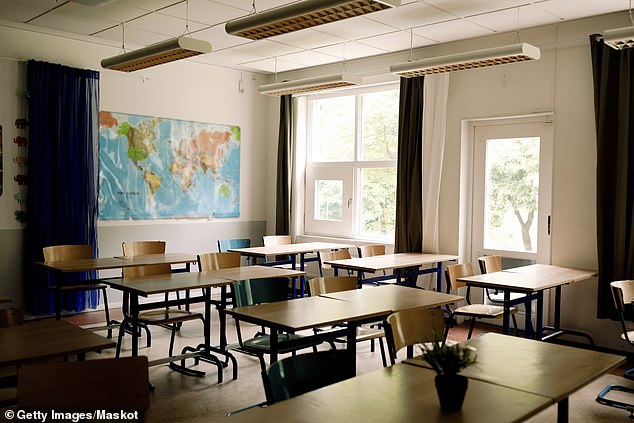 ‘This is not a plaintive plea of poverty. Nor is it the usual begging bowl moment ahead of a spending review – this is serious stuff.’

Funding per pupil in England dropped by nine per cent between 2010 and 2020.

Although the Government promised an additional £7billion for school budgets in England by 2024, the Institute for Fiscal Studies has warned that spending per pupil will still be lower than 2010 levels in real terms.

Dr Robin Bevan, headmaster of Southend High School for Boys in Essex, said: ‘If a four-day week is not already being planned, it will certainly be being considered’ by some schools.

‘In the absence of long overdue above-inflation investment in school funding, it’ll become a realistic prospect sooner rather than later,’

Dr Bevan said his school was forced to dip into its limited reserves to keep operating. While its income will receive a £300,000 boost, it will be hit by a £2200,000 rise in its utility bills, plus additional teacher pay costs of £70,000 and another £40,000 outside its budget for support staff.

Dr Bevan described the future as ‘exceptionally bleak’ and said costs were rising faster than budgets can adapt.

A spokesman for the Department for Education said: ‘We recognise that schools – much like the wider economy – are facing increased costs, including on energy and staff pay.’

‘Our schools white paper set out our expectation that the school week should last a minimum of 32.5 hours – the current average – for all mainstream state-funded schools. Thousands of schools already deliver this length of week within existing budgets and we expect current funding plans to account for this.’