Scramble for university places as 43,000 pupils struggle to sign up for a course amid post-Covid grades crackdown and huge rise in foreign student numbers

Tens of thousands of A-level pupils were desperately trying to find a university place last night after a record drop in grades.

More than 43,000 ended up without a guaranteed place – the highest number in a decade – following a post-pandemic crackdown on grade inflation and a higher than usual number of applications.

It means pupils face a frantic scramble in the coming days to find places via Clearing – the process through which universities fill remaining spaces on courses.

To compound the problem, there are far fewer Clearing courses available at top universities this year than there have been previously.

The shortage of places also coincides with a huge rise in the number of foreign students, who pay higher tuition fees. 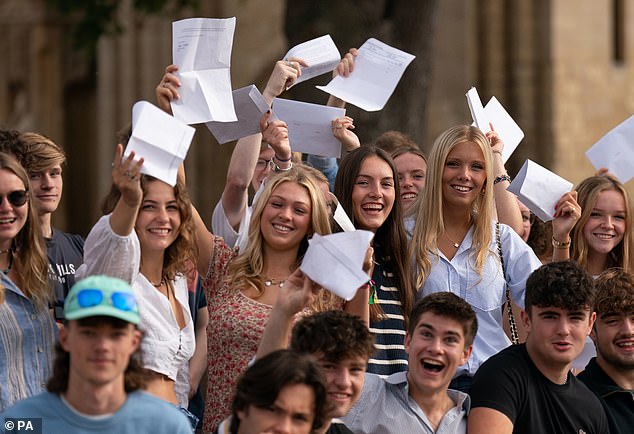 Pupils face a frantic scramble over the coming days to find places via Clearing – the process through which universities fill their remaining places. Pictured, students at Norwich School

At the most elite universities, there was a 7 per cent rise in acceptances for international students, despite the institutions accepting 10 per cent fewer students overall. Yesterday admissions tutors frantically took calls from pupils scrambling for last-minute places – leading the phone lines to break down at one university.

Alan Smithers, professor of education at Buckingham University, said: ‘This year is probably the hardest ever to get your first choice university place if your grades don’t immediately meet the university’s requirements. There’s intense competition for the top courses at the top universities. Students may not get something which is equivalent to the sort of place they were aspiring to.’

He added: ‘Universities are actively out there recruiting overseas students because they bring much higher fees into the universities than home students.’

More than half a million teenagers picked up their results yesterday after sitting exams in a traditional manner for the first time since the pandemic.

On a record-breaking results day, boys started catching up with girls’ grades with the return of formal testing, while private schools lost some of their lead over other schools, leading to accusations that teachers may have inflated grades last year.

The return to exams this year has led to a drop in grades as officials try to curb grade inflation of the pandemic years, when generous teachers were entrusted to give out grades.

Now marking is being brought back in line with 2019 levels in two steps, with a further drop planned for next year.

Yesterday’s figures showed more than 60,000 fewer entries were graded A or A* this year compared to last, while the number of pupils getting a clean sweep of A* grades dropped by a third.

Private schools accused of ‘playing the system’ during Covid

Private schools have been accused of ‘playing the system’ during Covid teacher assessments as their top grades plummeted under a return to exams.

Independently-educated A-level pupils in England have had one of the biggest drops in As and above this summer. Private schools hold the greatest share of top grades, at 58 per cent, but this is down from 70.4 per cent last year. Chris McGovern, of the Campaign for Real Education, said the ‘private sector made hay while the sun shone last year by playing the system… private schools are under more pressure from parents than state schools.’ Barnaby Lenon, of the Independent Schools Council, insisted last year’s grades were ‘subject to rigorous quality checks’.

And the number of students with a clean sweep of A* grades fell to 8,570, down from 12,865. Headteachers told how top pupils had been rejected from their first choice after narrowly missing the required grades.Pepe Di’lasio, head at Wales High School in Rotherham, told BBC Radio 4: ‘There are about 15 students here of approximately 120 that are looking for university places, that we think may well have missed out on their first choice. The students have had a horrendous two years. What we have had is these 18-year-olds facing the perfect storm in the most competitive year ever to get into university.’

Former government education adviser Chris McGovern said: ‘The people who are suffering this year are the victims of last year’s solution. They’ve had a rough deal because it was too generous last year.’

More than 20,000 students were left with no offer at all from either their firm or insurance course choice, a rise of 46 per cent on last year – the biggest rise in a decade. Meanwhile, 43,000 students were last night listed as ‘free to enter Clearing’ – the highest number in ten years.

Clearing is run by admissions service Ucas, and matches pupils with no place to unfilled degree courses.

There was controversy yesterday because the number of international students entering elite or ‘higher tariff’ universities rose, while numbers in general – and of pupils from the UK – dropped.

A total of 33,920 international students won places at elite ‘higher tariff’ universities this year – up from 31,580 last year.

Meanwhile UK acceptances to those universities, which include Russell Group institutions, fell from 131,520 to 117,840. UK fees are capped at £9,250, while international students pay an average of £24,000.

Education Secretary James Cleverly congratulated pupils yesterday, saying: ‘These students have experienced unprecedented disruption over the last couple of years, and such excellent results are a testament to their resilience and hard work.’