A Melbourne monument depicting Captain James Cook was doused in red paint overnight as part of an Australia Day protest.

The statue, located near St Kilda beach, was defaced and its base was papered with flyers proposing the abolition of Australia Day celebrations. The vandalism attracted a small group of curious locals to Catani Gardens on Wednesday morning. 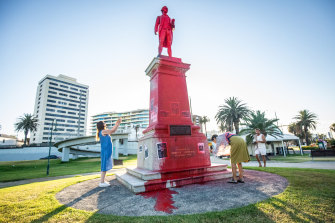 Port Phillip detectives are investigating the incident and have urged anyone who may have witnessed the incident to contact the police.

It is not the first time the statue has been defaced. Vandals poured pink paint over the monument on the eve of Australia Day in 2018, scribbling the words “no pride” beneath Captain Cook’s feet along with the Aboriginal flag.

A similar memorial at Edinburgh Gardens in Fitzroy North was also reportedly defaced, but a caller to radio station 3AW said he cleaned the “thick red paint” off early Wednesday morning.

That statue was covered with graffiti in 2020. The words “destroy white supremacy” and “remove this” were scrawled on the monument’s stone and bitumen in front of it.

The discovery came on the same day a statue of Captain Cook in Sydney was defaced, and a day after busts of former prime ministers Tony Abbott and John Howard were vandalised in Ballarat.

Statues of have become a focal point of racial tension in recent years.

Protesters across the US tore down and vandalised statues and memorials of Confederate soldiers and generals following the killing of George Floyd in Minneapolis in 2020. 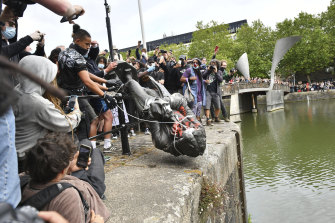 That same year, British protesters toppled a statue of 17th-century slave trader Edward Colston from its plinth and pushed it into the docks at Bristol.

In Victoria, a Gippsland council voted against removing two monuments honouring Scottish explorer and pastoralist Angus McMillan, who was linked to the massacre of Indigenous people in the area.

The motion, put forward by councillor Carolyn Crossley, was responding to demands around the world for the removal of monuments to oppressors as part of the Black Lives Matter movement.

The proposal to remove the monument was backed by Gunaikurnai Land and Waters Aboriginal Corporation chair Troy McDonald, who said the cairn dedicated to McMillan represented the celebration of a man arriving on Aboriginal land and committing genocide.

Anyone who witnessed or has information about the St Kilda incident is asked to contact Crime Stoppers on 1800 333 000 or report the information online.

Former cancer tsar calls for doctors to work from home