London: Google, Apple and other tech giants must switch off services helping the Russian military in Ukraine, according to an international expert group on sanctions set up by President Volodymyr Zelensky.

Western firms, including Google, Microsoft, Meta and Apple, continue to provide hardware, software and services that aid Russia’s military and government, a report from the Yermak-McFaul Group published on Thursday says. 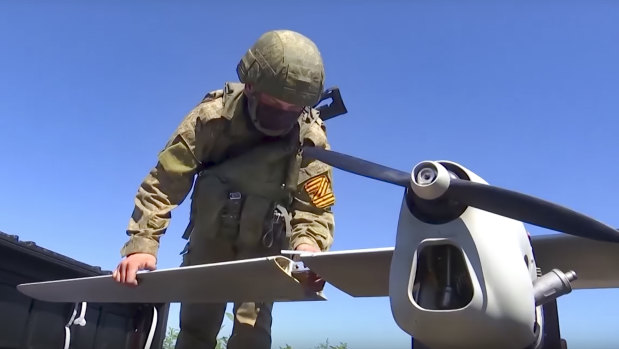 In this hand out photo from Russia’s military, a soldier prepares an Orlan-10 reconnaissance drone for launch. A report has called on tech giants not to supply IT components that help Russia’s war on Ukraine.Credit:AP

It explains that most of the products and services created by leading technology companies fall outside the current sanctions regimes imposed on Russia by the West, leaving the firms to decide for themselves how to proceed.

And it calls on tech companies to “limit the damage their technology causes to the people of Ukraine, and the cost borne by… sanctioning nations in paying for the damage this technology allows on Ukrainian soil”.

The report from the group, co-chaired by Andriy Yermak, head of the Ukrainian presidential office, and Michael McFaul, the former US ambassador to Russia, says devices such as smartphones, mobile operating systems, and cloud services are repurposed for “battlefield communications” and “real-time reconnaissance”.

And it said tech companies should “disable” key services that assisted the Russian armed forces.

The report recognised technology firms faced a fine balancing act, with several major companies such as Google and Microsoft also playing a leading role in helping Ukraine to protect itself from cyber threats.

The group called on the West to “block the ability of the Russian government and its partners to use or source equipment that contains software, firmware, and components that were manufactured by, or contain intellectual property from, any sanctioning nation”.

It also called for a ban on basic consumer goods being sold to Russia that are being absorbed into military equipment fabrication and repair lines.

The report said: “The Russian military-industrial complex has resorted to using microchips from consumer electronics in order to produce/repair some types of weapons systems. Consumer digital cameras appear in its flagship drones. It is imperative that Russia must not access any IT in whatever shape or form that plays a role, or could substitute for any item that plays a role, in sustaining Russia’s war in Ukraine.”

Yermak added: “I issue an immediate plea to all Western governments to tighten the sanctions regime against Russia. I also call on all Western companies to consider what more they can do to end this disgraceful war.”

McFaul said: “As the war continues, it is necessary to evaluate the direct and indirect damage associated with the continued availability of certain infrastructure and services within Russia, and any potential ambiguity in the use of their technology.

“We trust that these companies – and the thousands of others still engaged in the technology ecosystem supporting Russia – will want to work in good faith with sanctioning governments to find fast, effective, and complete solutions to limit further damage.”