The airport so chaotic that PILOTS are now ranting to passengers about it: Furious Gatwick customers vent their fury after WizzAir captain lost his temper over the tannoy after ‘SEVEN-hour’ runway delay

Chaos at Gatwick Airport is continuing as furious passengers slam staff shortages at check in desks and border control – hours after a WizzAir pilot lost his temper over ‘seven-hour’ runway delay.

The lengthy delay came as passengers were today stuck in ‘apocalyptic queues’ across the UK as British Airways cancelled 114 flights at Heathrow, EasyJet grounded nine planes at Gatwick and holidaymakers had to wait 20 hours to board a TUI flight at Exeter.

Holidaymakers were also met with queues stretching into the car park at Manchester Airport, where passengers are advised to arrive three hours before their scheduled departures.

Britons are already facing fears of a summer of cancelled holidays with Passport Office staff battling a backlog of half a million applications and airports struggling to cope with crippling staff shortages.

It comes after airports laid off thousands of staff as demand for travel and revenue plummeted during the pandemic.

But as Covid restrictions were lifted earlier this year, demand has surged and airports have been left frantically trying to recruit new staff.

Industry chiefs have warned that airlines ‘are simply unable to cope with that demand due to a lack of resources’ and warned that the ‘nightmare’ disruption – of the sort seen over Easter, where hundreds of flights were cancelled by airlines including British Airways and easyJet – could last all year.

But the frustration has not been limited to passengers.

One holidaymaker caught the moment a frustrated WizzAir pilot ranted over the tannoy, while they were stationary on the runway of Gatwick Airport during a reported seven-hour-delay.

‘I don’t need this!’ He told the exhausted holidaymakers, who were stuck in their seats waiting to set off to their destination of Larnaca, Cyprus. 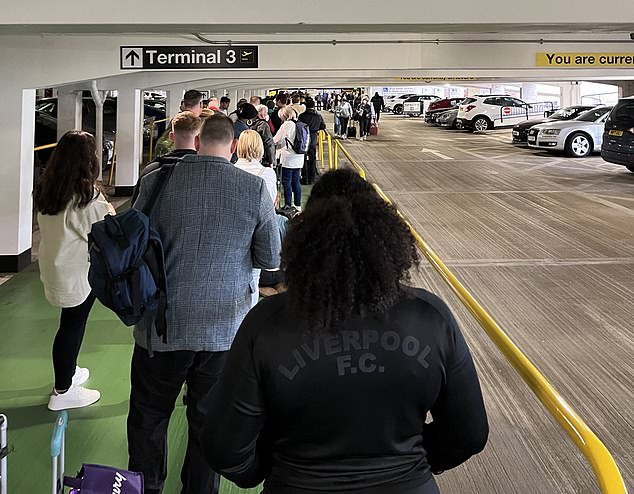 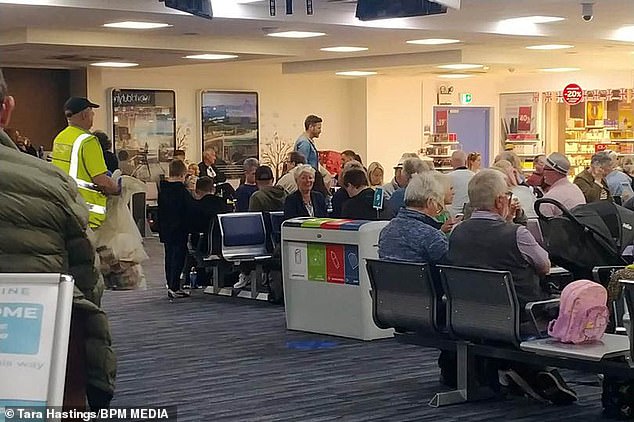 Passenger Hannah Mace filmed the moment in disbelief and uploaded the video to TikTok.

‘We’re doing everything we can. If you want to get off, I’ll let you off, no problem.’

On Tuesday morning travellers complained of up to four hour delays, with one Twitter user describing their experience as ‘horrible’ and ‘grim’.

A spokesman for Gatwick Airport tweeted in response: ‘Hi, we’re really sorry for any delay. We are operating a moving queue system and staff are working hard to process passengers as quickly as possible through Security Search.’

Airport delays have plagued holidaymakers since Covid restrictions were lifted earlier this year.

This, along with Covid absences, has been behind long queues at check-in and security at airports across the UK – including Heathrow, Birmingham and Manchester

British Airways cancelled 118 short and medium-haul flights from Heathrow yesterday, with a further 114 called off today.

The airline has said the cancellations were planned, with customers informed well in advance, but its staff have been fighting against IT issues for weeks and crew from partners Finnair have been brought in to complete scheduled flights.

Yesterday, queues at Heathrow were described as ‘an absolute shambles’ as passengers voiced their fury on social media amid a lack of airport staff and Border Force personnel.

One holidaymaker said: ‘Total shambles at Heathrow this morning. Gates are failing on about 50% of people and one operative on the seek assistance queue. Sort this nonsense! Absolutely ridiculous.’

Another added: ‘British Airways terrible flights and customer service during our honeymoon. 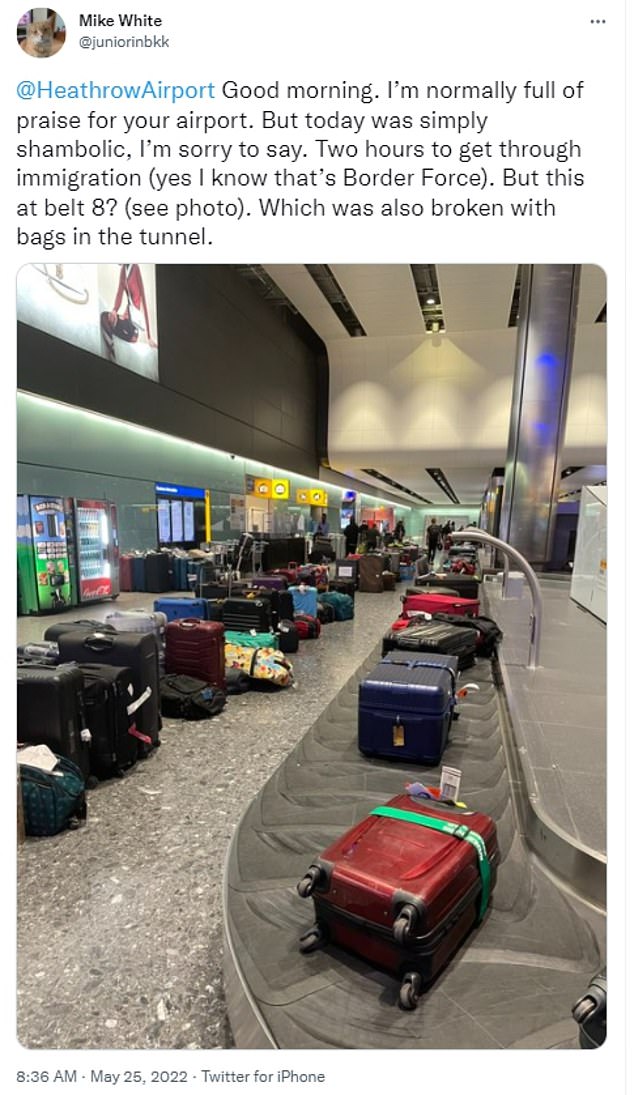 ‘Two hours delayed outbound, damaged suitcase and now a missed connection causing a five hour delay in Heathrow on our return to top it off!’

A third said: ‘I’m normally full of praise for your airport. But today was simply shambolic, I’m sorry to say.’

Such are the delays, the airport is currently advising passengers to arrive for their flights three hours in advance.

Elsewhere, EasyJet today cancelled nine flights to European destinations at short notice – two days after families were said to have been left sleeping on the floor when it grounded 23 flights on Tuesday.

Bosses at Gatwick also had to apologise after holidaymakers were left waiting for four hours to collect their bags on Tuesday – as passengers described queues as ‘hell on earth’.

The airport said these queues were temporary and dissipated relatively quickly.

And furious passengers at Exeter Airport were forced to wait nearly 20 hours to board two TUI flights to Crete and Rhodes due to ‘technical and operational issues’.

The flights had been due to leave at 3.10pm on Tuesday, but passengers were taken to a hotel overnight and ferried back to the airport at 3am the following day – before the plane finally left the ground at 1.45am.

The issues stem from unprecedented airline staff shortages caused by Covid self-isolation and mass layoffs during the pandemic.

Manchester Airport is among those particularly suffering, with passengers regularly facing lengthy queues as it frantically tries to hire hundreds of new employees to combat delays.

It comes after passenger numbers plummeted during lockdown, leading to financial issues resulting in more than 2,000 redundancies at the airport. 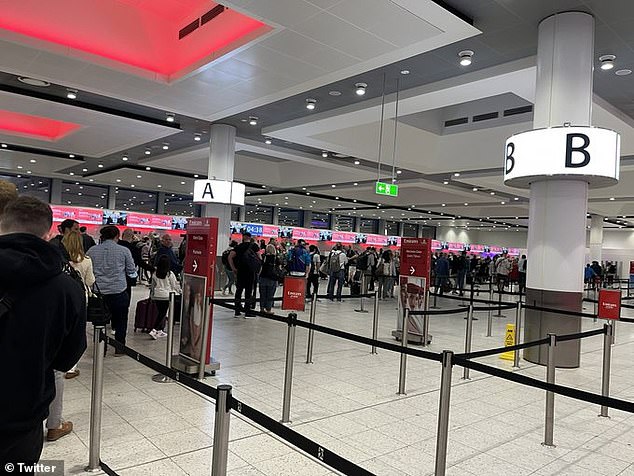 The airport admitted earlier this month that it is ‘unfortunately some way short of where we need to be’ as passengers were advised to arrive three hours before their flights over the May Day bank holiday.

A statement earlier this week added: ‘All parts of the aviation sector are experiencing challenges linked to the rapid recovery from the pandemic and we are working hard with all our partners, including handling agents, airlines and others, to deliver the best possible service we can in the circumstances.’

But Ministers have been accused of overseeing ‘cripplingly slow’ security checks for new staff – delaying the process of hiring new employees to meet travel demand.

It is a similar situation at Birmingham, too, with pictures regularly showing frustrated passengers in lengthy queues within crowded halls.

Problems at airports are compounded by delays over passport applications.

Passport Office staff have privately complained their systems are not ‘fit for purpose’ as the beleaguered Government agency battles a backlog of half a million applications.

Thousands of summer holidays could be cancelled over the delays, with workers warning the current crisis is just the ‘beginning of a very lengthy scenario’, according to a cache of 263 internal messages obtained by The Times.

Staff have hit out at their ‘creaking’ IT systems and accused Teleperformance – which handles the passport advice line – of giving customers ‘poor, misleading advice’ and exacerbating public anger.

Experts have warned that passport delays could cost Britons up to £1 billion in cancelled holidays over the summer, with only half of all applications estimated to be processed on time.