The Crown casino royal commission is long overdue, and the Andrews government a laggard

Facebook has banned the sharing or viewing of our news articles on its platform. For independent journalism straight from the source, download our app and sign up to our newsletters.

The decision of the Victorian government to call a royal commission into the money laundering and corporate governance scandal that has enveloped Crown Resorts smacks of political expediency. If Premier Daniel Andrews actually cared about ensuring Crown casino wasn’t a haven for organised crime, he would have called this inquiry in mid-2019.

That’s when The Age, The Sydney Morning Herald and 60 Minutes exposed money laundering and the criminal infiltration of Crown’s Melbourne and Perth casinos. Those reports sparked the Bergin inquiry in NSW, which was called by the NSW gaming regulator to test the accuracy of the reports and make sure Crown’s new Sydney casino wouldn’t be exposed to the same problems as its Perth and Melbourne casinos. 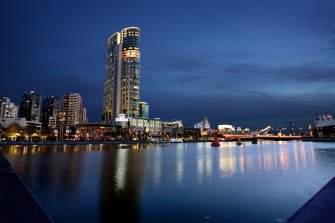 Crown in Melbourne. The casino operator is finally facing the same scrutiny in Victoria as was applied in NSW.Credit:Jessica Shapiro

What did the Andrews government initially do? It looked the other way.

Bergin, a former senior judge, moved swiftly. Within months of her probe starting, it became obvious the reporting not only stacked up but that the situation was even worse than what had been aired.

For example, Crown executives were exposed as having been repeatedly warned that Triad organised crime syndicates had infiltrated Crown’s high-roller operations in Melbourne and Perth, and having done too little to respond to the associated money laundering and corporate risks.

The irony of the Bergin inquiry was it was held in NSW, dealing with casino misdeeds in Melbourne and Perth – cities in which Crown had been given a clean bill of health by supposed frank and fearless regulators.

By exposing Crown’s corporate malfeasance, Bergin was also laying bare the dismal failure of Victoria’s gaming regulator to do its job. The Victorian Commission for Gambling and Liquor Regulation has been an ineffective regulator – an open secret within law enforcement and casino industry circles for years.

But the commission is not solely to blame. It was lumbered by previous Victorian governments with an ineffective mandate and weak powers. The commission was also hamstrung by its inability to access vital law enforcement information.

It was also stymied by poor leadership. Too often the commission was satisfied with sending Crown a stern letter but doing nothing else.

The Victorian government’s belated decision to call a royal commission came both after Bergin delivered her stunning assessment that Crown was unfit to hold a casino licence in NSW and after the West Australian government realised its gaming regulator had, as a result of this finding, been exposed as having failed in its duty. The WA government ordered a commission of inquiry into Crown last week.

From that point on, Victoria had no choice but to follow.

If Victoria’s royal commission is to be effective, it will not only examine Bergin’s forensic inquiry and look at why the state’s gaming regulator has failed to hold Crown to account. It must also examine why Victoria Police’s organised crime division, and the senior police who run it, chose to handball serious intelligence about Crown’s criminal infiltration to other agencies.

The police missed several opportunities to launch a joint taskforce with anti-money laundering agency Austrac and other federal policing bodies that could have exposed or prevented the criminal infiltration of Crown.

The royal commission should also examine if the links between politicians, lobbyists and Crown, or the relationship between serving police and the ex-police who work for Crown and some of its high-roller agents, have stymied proper oversight of the casino. It’s hard to imagine the royal commission can do all this by August, the date it is meant to finish its work.

Having finally done what it should have many months ago and called an independent inquiry, the Andrews government must also ensure the royal commission has the power, resources, terms of reference and time to do its job properly.

casino, commiss, Crown, Royal, the
You may also like: