Follow
Home » World News » The death of the dining room: TV made open-plan eating an aspiration

The death of the dining room: TV made open-plan eating an aspiration

Do you mourn the death of the dining room? No place in the home is more representative of our rituals… but TV made open-plan eating an aspiration, writes Rose Prince

The dining room in my childhood home was a hallowed space. Its door was almost always shut and we ate in it as a family only on special occasions and sometimes Sunday lunch.

Our parents would otherwise use it for their dinner parties, nights when we’d go to sleep to the sound of their muffled chat and laughter, along with the smell of cigar smoke. We children ate regular meals in what was then called the breakfast room — a small space with a Formica table next to the kitchen, linked together by a hatch in the wall through which food was passed.

I still remember, however, what an exciting honour it would be to find myself sitting at a table polished to a mirror shine, damask napkin on the lap and legs swinging from the chair, playing at being a grown up.

Compare that life to today’s typical living style: the open-plan kitchen-diner whose popularity has all but expelled the wasted space of a dining room from family homes.

The online property portal Rightmove has reported that the number of properties for sale with a separate dining room has fallen by 28 per cent since 2012. Meanwhile, the number of its property listings mentioning open-plan living has risen 74 per cent in the past decade. 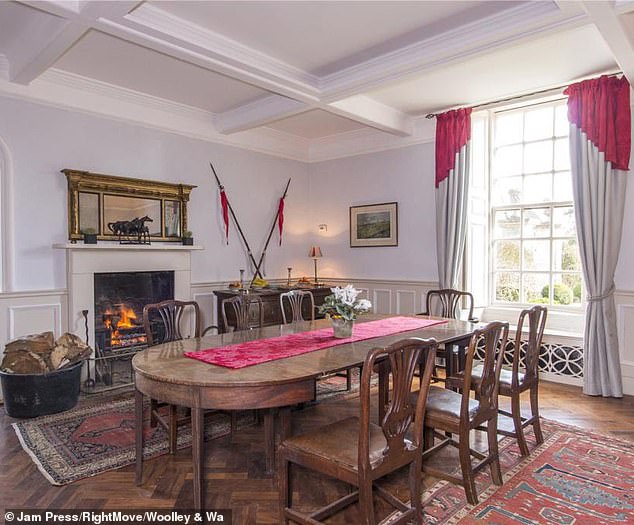 The dining room in Rose Prince’s childhood home was a hallowed space. Its door was almost always shut and we ate in it as a family only on special occasions and sometimes Sunday lunch

I have lived the open-plan style for many years, have brought my children up that way and agree it is the practical way to live, and a hive of multi-tasking.

As the family’s cook, I’m never squirreled away alone, sweating in a kitchen, but part of the family. I’m not excluded for pre-drinks when friends come round and I have spent many thousands of hours with visitors, gossiping at the table. A sofa in the room also means the occasional TV dinner.

I have pootled about the kitchen while my children argued the case for telly over homework, told me about their day, their friendships, heard (or ignored) their moans and demands.

And yet there were times when I caught myself with the selfish thought that I could never escape or get away, unless I headed to my bedroom. How nice it would have been now and then to shut myself away for dinner with my husband, talking about our day without the TV blaring in the background.

Open-plan living can feel more like trying to manage everything in the middle of Piccadilly Circus.

Besides my personal foibles, there is a serious note to the decline of formal dining. No place in the home is more representative of our many, various and ancient rituals than the place where we sit down to eat.

To wit, your dog is happy to eat out of a bowl on the floor but humans have complicated the act of eating with hundreds of customs and use of material things. 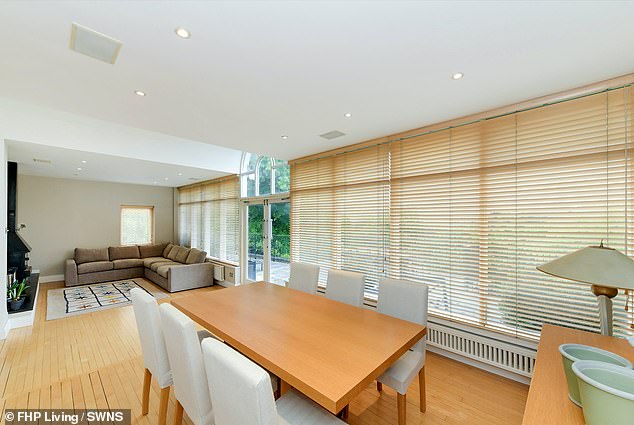 The open-plan kitchen-diner, whose popularity has all but expelled the wasted space of a dining room from family homes

Of the customs, the most important are manners — table manners, to be specific. Of the decor, there is the setting of the table, then the crisp linen, the candlesticks and perhaps even some flowers. It was in the dining room, not at the kitchen table, where manners most mattered. My father was scrupulous with this and when as a teenager I was first asked to join a grown-up dinner party, I was carefully coached beforehand.

We were taught how to use cutlery ‘outside-in, for heaven’s sake’ (it always annoyed him that I, being left-handed and a bit ambidextrous, held my dessert spoon in my right hand but couldn’t hold a dessert fork in my left).

I was taught to clear the table from a guest’s left, serve to their right and never spend the whole dinner talking to the more interesting person sitting beside me.

All the while, it was imperative I remembered to ‘sit up straight’. My own children think all this faintly ridiculous, but like many others I value it and it is very useful socially. After all, our rituals are designed to honour food, but they are also comfortably unifying. Once, when interviewing a caterer at a Cambridge University college, the importance of the dining hall was explained to me.

Meals taken in ‘Hall’ were formal — a place where young undergraduates could learn the rituals in preparation for future corporate dining situations.

I do appreciate it may seem laughably old-fashioned. It is sad, however, to imagine a world in which hall meals become redundant — all that shining brown furniture reeking of Mr Sheen, condemned to the Gumtree graveyard.

It is a shame when you think of all the elbow grease employed to keep up the gleam (accidentally scratching our dining-room table was tantamount to breach of contract in our home).

What will happen to the heirlooms of so many family homes? The silver-plate forks and spoons or the bone-handled knives given as wedding presents — they were never much good in the dishwasher anyway — and who needs wine coasters?

And yet in dispensing with these special places we dispense with so much history. Our dining rooms date back to the ancients. The Greeks introduced them, the Romans followed with their triclinium — with reclining couches around the tables. Both regarding these rooms as status symbols. Yes, they were the preserve of the rich. In some of Britain’s larger houses, dining rooms adjoined the many other reception rooms, often far away from the kitchens. 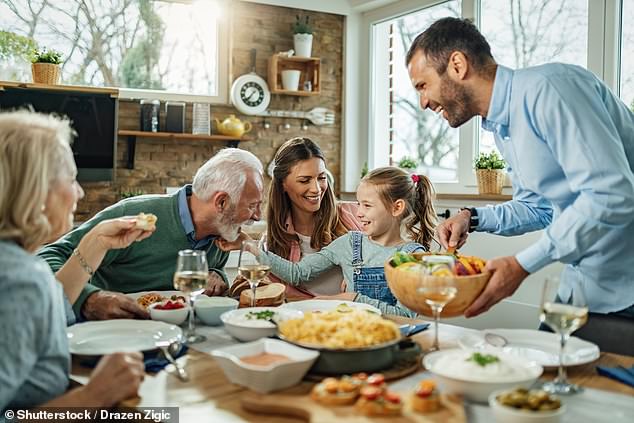 I still remember, however, what an exciting honour it would be to find myself sitting at a table polished to a mirror shine, damask napkin on the lap and legs swinging from the chair, playing at being a grown up

In Chatsworth House, for example, the dining room was so far from the kitchen that guests complained the food was freezing cold by the time it was served at the table. So when the first electro-thermal ovens became available in the 1930s, one was placed outside the dining room with the sole purpose of reheating congealed gravy.

It took centuries and changes in housing design to bring dining rooms into the homes of a wider demographic. The origins of the open-plan kitchen-living room began early in the 20th century alongside a move to take more meals informally at the kitchen table for convenience, particularly as more women started working outside the home and had less time for preparing food.

Early 20th-century modernist architects, Frank Lloyd Wright and Mies van der Rohe, were inspired by the way the Japanese built their living spaces, with huge sliding partition doors between kitchen, dining and sitting areas. They incorporated this style into new European architecture and the seeds of an open-plan future were sown.

Then the layouts of typical British terraced houses began to change with the fashion for demolishing the wall dividing the two small rooms on the ground floor of the house. To begin with this often meant installing dividing double doors — but soon evolved into a complete knocking together of two rooms into one, supportive steel beams buried in the walls, floor and ceiling. 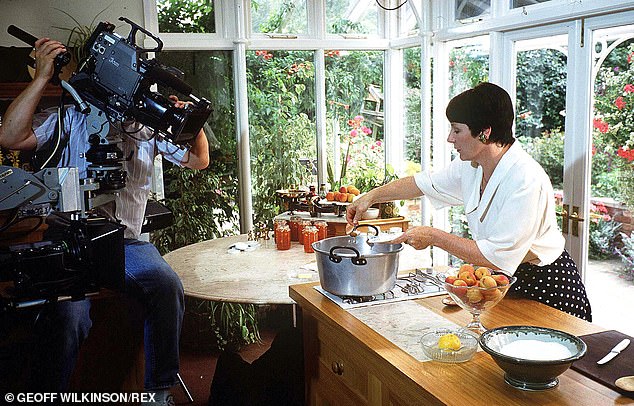 I believe it was TV cookery that finally made it the aspiration of all to join the world of open living. I can still envisage Delia Smith’s enviable conservatory kitchen she built specially in her house for her shows in the 1990s so she could cook realistically, facing the world

When modular fitted kitchens became the norm in the 1950s, it was possible to put a kitchen anywhere in the home, providing there was a nearby drain. And of course, there was the emergence of the ‘kitchen island’, meaning we could prepare food while socialising with our guests.

I believe it was TV cookery that finally made it the aspiration of all to join the world of open living. I can still envisage Delia Smith’s enviable conservatory kitchen she built specially in her house for her shows in the 1990s so she could cook realistically, facing the world. It was a radical departure from the phoney television studio kitchens used by the likes of The Galloping Gourmet.

The design of celebrity TV chef kitchens — routinely open-plan now — are now much talked about when presenters launch their new series. Nigella’s beautiful copper fittings in her series At My Table caused a huge stir, initiating endless copper kitchenalia to flood the market.

So is it a case of dining rooms RIP, or might they one day return? American historian Christopher Lasch once called them a ‘haven in a heartless world’ and in many ways they still are. But my favourite justification for having such a haven is that of my friend Stella, who still stoically maintains hers for those wonderful, slow, chatty, smoky dinner parties.

‘The best thing about a dining room,’ she says, ‘is that you can slam the door on it after dinner on Saturday night and deal with the mess on Monday.’