Follow
Home » World News » The outback telescope that could see across the universe, perhaps even aliens

Construction on the world’s biggest radio telescope, which will span two continents, peer deep into space and time and is expected to capture the “entire observable universe”, will officially begin on Monday.

The Square Kilometre Array will be split between remote observatories in Western Australia’s Mid West and South Africa’s Karoo region, combining to produce a telescope with a collecting area of about one square kilometre. 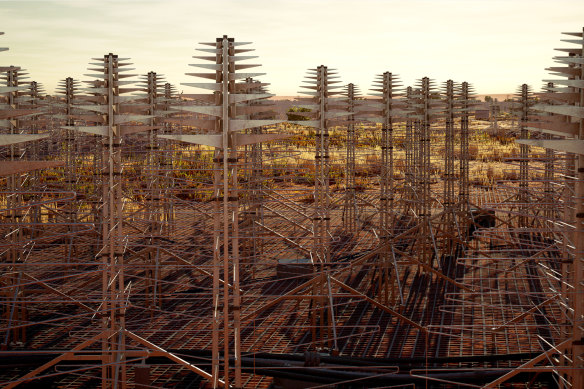 An artist’s impression of the low-frequency radio telescopes to be built in Western Australia’s outback.

Scientists hope to use the immensely powerful telescope to study the universe’s “cosmic dawn”, a period between about 100 million and 1 billion years after the big bang when the first stars burst to life and galaxies formed.

They will use radio astronomy to study stars, planets, dust, gas and galaxies in wavelengths and frequencies invisible to the human eye – the same technology utilised by the James Webb Space Telescope to produce unprecedented images of the universe.

Ceremonies at Inyarrimanha Ilgari Bundara, the CSIRO’s Murchison Radio-astronomy Observatory in WA, and the South African Radio Astronomy Observatory on Monday will mark the official start of construction on the project more than two decades in the making.

WA will host more than 131,000 Christmas tree-shaped antennas scanning the sky for low-range radio frequencies between 50 and 350 megahertz, while an array of 197 dish antennas in South Africa will operate between 350 megahertz and 14 gigahertz.

“The SKA telescopes will be sensitive enough to detect an airport radar on a planet circling a star tens of light years away, so may even answer the biggest question of all: are we alone in the universe?” she said.

The entity behind the project, the Square Kilometre Array Observatory, is only the second intergovernmental organisation dedicated to astronomy and is a collaboration between 16 countries, headquartered in the United Kingdom.

South Africa and Australia were shortlisted to host the telescope in 2006, before a decision was made to split the project between the two in 2012.

It has been beset by cost hikes and initial plans to begin construction in January 2021 were delayed by the COVID-19 pandemic.

But on the eve of construction beginning, researchers were ebullient about the telescope’s potential.

Professor Alan Duffy, lead scientist of the Royal Institution of Australia, said the SKA would allow astronomers to see “essentially across the entire observable universe”.

“The science goals are as vast as the telescope itself, from searching for forming planets and signs of alien life, to mapping out the cosmic web of dark matter and the growing of galaxies within those vast universe-spanning filaments,” he said.

Sydney Institute for Astronomy deputy head of school, Professor Tara Murphy, described the project as a “game-changer, not just for radio astronomy but for our collective understanding of the universe”.

“The SKA will produce the most sensitive surveys of the radio sky we have ever seen,” she said.

“We will be able to identify rare events that change rapidly, including the violent explosions when massive stars die.”

Just as exciting as the telescope’s eventual discoveries is the breadth of technology developed to gather and process the immense stream of data – the equivalent of the entire internet will flow out of the array every day.

Data from the SKA-Low will flow to the Pawsey Supercomputing Centre in Perth, which following a recent upgrade boasts the most powerful – and greenest – supercomputer in the southern hemisphere.

Two precursors to the SKA in the Mid West – the Murchison Widefield Array and Australian Square Kilometre Array Pathfinder radio telescopes – have already made significant discoveries about the universe in their own right.

They will continue as separate projects once the SKA is fully operational.