The Queen is dead, long live the King!

On Sunday, I watched on television the proclamation of King Charles III as King of Australia. I did cringe a little. A few hundred members of the public turned up on the lawns of Parliament House in Canberra. There was a gracious welcome to country by Ngunnawal elder Aunty Violet Sheridan. The Royal Military College at Duntroon played a march and I did love hearing Waltzing Matilda, a local touch after 48 hours of British pageantry and ancient ceremony.

Our Governor-General David Hurley proclaimed: “Prince Charles Philip Arthur George to be King Charles III, by grace of God, King of Australia and his realms and territories”. 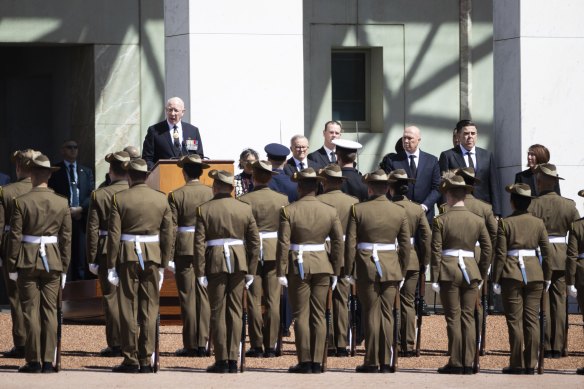 “And with hearty and humble affection we promise him faith and obedience.”

Katina Curtis reported that Hurley called out “God save the King!” and “a handful among the public took up the cry”.

I am not a rabid republican, but it seemed a little odd. During the Queen’s long reign, the affection and respect many people felt for her was because, in part, she was always there, a source of stability during always-turbulent times.

We barely noticed her image on our coins or $5 notes. It was accepted by almost everyone – republican, monarchist and “don’t care” alike –that after the defeat of the 1999 republic referendum, the issue of whether Australia should sever its constitutional ties to Britain would lie dormant until after her death.

We have discussed these things at The Age all week. How much coverage was too much? When was too soon to raise whether her death might see a change in sentiment in Australia towards having a foreigner as our head of state – a largely ceremonial role given the primacy of our parliamentary democracy, but one with residual powers and of symbolic importance?

It was on Monday morning, after that Canberra ceremony, that we first raised it properly, and we wondered if our readers would find it too early. They didn’t – our letters pages were full of discussion about whether Australia should become a republic or not.

We sensed that most of our readers wanted first to think about the Queen’s remarkable life and public service. Her first British PM was Winston Churchill, her last was Liz Truss, just two days before her death. The affection for her was sincere and widespread.

The Age, along with most media, had been preparing for the Queen’s death for more than a year. As brilliant as online publishing is, our 24-page commemoration of the Queen in The Age on Saturday was a reminder of the power of print to mark historic moments.

Chief political correspondent David Crowe wrote that the Canberra ceremony on Sunday “was an echo of a proclamation made elsewhere when members of the Privy Council had stood before King Charles on Saturday at St James’ Palace in Westminster”.

“Every constitutional step taken on the forecourt of Parliament House followed the traditions set in London and, therefore, reminded every onlooker of a debate – muted for now, but inevitable in time – about whether Australia might one day break its bonds with Buckingham Palace.”

Our editorial on Monday noted that “the monarchy has a complex history, and we should not flinch from the truth of it, even as we take time to mark a remarkable life well lived. It might not be quite the right time for a full-blooded republican debate, but it will come.”

I think we got that balance right, although no doubt some will disagree.

The Queen’s death has thrown up all kinds of stories, from the trivial to the profound. It is impossible to note them all, but our Europe correspondent Rob Harris is the perfect person to write the first draft of history for us. He wrote about the grief in the United Kingdom, and its deeper meaning.

“So many of its institutions appear so outdated or tarnished that the survival of the 315-year-old United Kingdom itself is by no means necessarily assured. The nation is gripped by an economic crisis, is politically and geographically divided and still battling its European neighbours.”

He wrote more recently about joining the queue to walk past the Queen’s coffin in Westminster Hall. Thousands of people, young and old, rich and poor, waited for eight hours or more for a final glimpse of their Queen.

“It was the silence which was the most remarkable thing,” Rob wrote.

“There was none of the cheers or applause that had rippled along the course of the Queen’s final journey. It was a reverent, phoneless hush that you rarely see anywhere now. No faces staring at screens or posing with their friends for selfies.”

Columnist Sean Kelly was insightful when he pondered the contradictions and confusion that make up our responses to the Queen’s death. “Every nation contains fictions and contradictions it prefers to avoid thinking about. A symbol of some sort will always be needed to hold them together – that is what symbols do – and something will present itself.”

I am looking forward to Chip Le Grand’s piece tomorrow delving more deeply into the discussion of a republic and how closely that is tied with the coming referendum on the Indigenous Voice. Richard Flanagan will write for us, too, and his view is that the coverage has been over the top. (Richard wasn’t much interested in the fate of the corgis, although I thought that was rather sweet.)

No doubt you will have your own opinions and, as ever, I am happy to hear them.

Gay Alcorn sends a newsletter to subscribers each week. Sign up to receive her Note from the Editor.