Manila: Thirty-six years after the people of the Philippines took to the streets to depose a dictator, his son is headed back to the presidential palace, the Malacanang.

Ferdinand “Bongbong” Marcos jnr is poised to be sworn in as the country’s new leader next month after receiving a stunning majority in Monday’s election. His running mate Sara Duterte – the daughter of the outgoing president Rodrigo Duterte – clinched the vice-presidency in even more emphatic fashion, according to voting results transmitted to the Philippines’ electoral commission. 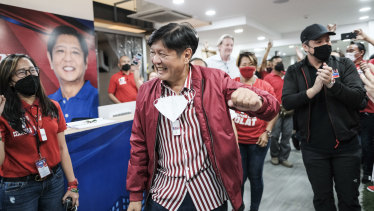 The 64-year-old’s victory is a seismic outcome for south-east Asia’s second largest democracy, where disillusionment has spurred the voters to turn once again to a notorious name.

There will be much interest, not least in Washington DC and Canberra, about how he conducts affairs beyond its borders.

Philippines is one of several nations that have territorial disputes with Beijing in the South China Sea. But Marcos has foreshadowed an intention to pursue a maritime deal with Xi Jinping’s regime and set aside an international tribunal ruling in The Hague that rejected China’s sweeping claims to most of the contested waterway under its so-called nine-dash line. 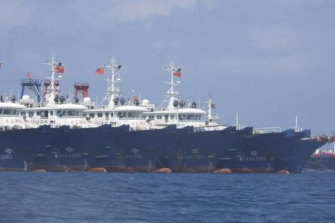 The Philippines last year protested the mooring of 220 Chinese vessels in the Whitsun Reef, an area of the South China Sea claimed by Manila.Credit:AP

“That arbitration is no longer an arbitration if there’s only one party. So, it’s no longer available to us,” he said in January, adding that war is not an option and “bilateral agreement is what we are left with”.

Duterte also initially disregarded The Hague’s decision to seek closer ties with China when he was elected in 2016 before later invoking it as Filipino fishermen continued to be harassed and intimidated and Chinese maritime militia vessels lurked in Philippine waters.

The incoming president has also said he would not ask the US for help when he has differences with China, wary of turning it into a superpower dispute.

The westernised Marcos is unlikely to emulate the rhetoric of gunslinger Duterte, who threatened to rip up the long-standing visiting forces agreement with the US before eventually signing the military pact again last year, allowing American troops to train and operate out of the country. 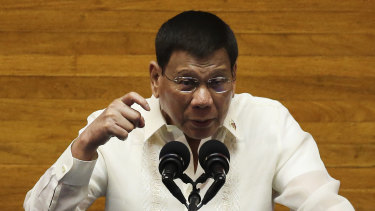 Marcos’ rise will make diplomatic ties with the US a bit awkward. While he spent five years living in Hawaii when parents Ferdinand Marcos snr and Imelda took the family into exile there in 1986, there are questions about whether he can travel to the US without being arrested. There’s still outstanding legal matters connected to the assets of the Marcoses, who were alleged to have embezzled as much as $US10 billion ($14 billion) when they were in power.

“I don’t think the Biden administration would be too excited about engaging the Marcoses for understandable reasons,” said Richard Heydarian, a political scientist at the Polytechnic University of the Philippines in Manila.

“Nonetheless, America will have to engage the Marcos administration. They’ll have to make sure the Marcos regime will not lean too much into the Chinese orbit of influence.

“If there is optimal engagement from Western powers including Australia then I think the Marcoses could go in a much more balanced direction in terms of their foreign policy.”

Greg Poling, director of the Asia Maritime Transparency Initiative at the US-based Centre for Strategic and International Studies, believes Marcos himself will have “less room to manoeuvre” with China than Duterte did. 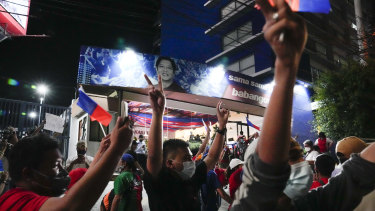 “The Philippine public and bureaucracy are even more distrustful of China than they were six years ago in the wake of their landmark arbitration victory in the South China Sea,” Poling wrote on Tuesday.

“Marcos might well try to revive Duterte’s early outreach to Beijing but he is unlikely to toss the US alliance overboard as part of the effort.”

Australia also has well-established security relations with Manila. Australia’s $80 million a year in aid to the country is focused heavily on the southern island of Mindanao, a hotbed for Muslim extremism where militants linked to Islamic State took the city of Marawi under siege in 2017.

Australian observers believe Marcos’ selection of key lieutenants is as important as his election itself. While Duterte often shot his mouth off one way or the another, the Philippines’ defence and foreign affairs establishments have tended to be the voices of reason in the background, defending the country’s sovereignty in the face of Chinese aggression and at the same time ensuring the US relationship remained on its legs.

Foreign Affairs Secretary Teddy Locsin jnr was also one of the few senior government figures in the region to welcome Australia’s AUKUS defence alignment with the US and the UK which includes the planned acquisition of a fleet of nuclear-propelled submarines.

Whether he and other presidential appointees remain beyond Duterte, though, is yet to be seen. Just as before, it is in the hands of a Marcos.