Distraught TikTokers have slammed recent prices in Primark – as they feel the once-most-affordable shop in Britain’s towns is now just like ‘every other’ on the high street.

The multinational fast fashion retailer announced in April that due to inflation it would have ‘no option’ but to raise its prices for a selection of this season’s range.

But some TikTokers who relied on the brand for ‘affordable’ clothing feel that Primark has ‘missed the mark’ by going too far with its price hikes – and risks losing its low-cost reputation.

It comes as families face soaring grocery, energy and fuel bills, with inflation driving up the prices of everyday items such as clothes and homeware.

The store sparked outrage in September when shoppers claimed the retailer was making ‘sneaky’ price changes by ripping off the original prices and sticking a new price on the underside of the tag.

Others claimed that some items were left with no price tag at all, meaning they were left to discover the cost at the till.

One TikToker, twenty-one-year-old Master’s student Lilly Whitfield, of Lincoln, shared a video describing her horror at being charged £44 for two pairs of polyester trousers. 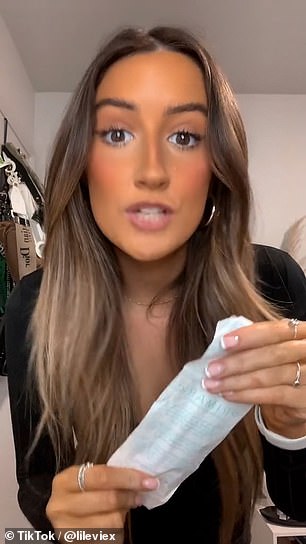 Speaking about recent prices in Primark, Ms Whitfield, pictured, said: ‘To see Primark have gone up so much in price is actually quite scary’

In the video which received more than one million views on TikTok, Ms Whitfield, with the TikTok username @lileviex, held up the items and said: ‘I’m sorry but since when did Primark become so expensive?

‘I walk in and see these trousers…I don’t even think about it I just grab the black and then also the beige colour as well.

‘Tell me why when I get to the till, he says £44 please? £44 for two pairs of trousers from Primark?

‘I’m pretty sure back in 2015 those would have been about £5 each. This cost-of-living crisis man is just going too far.’

Speaking to MailOnline, Ms Whitfield said: ‘Primark in the UK is known to be great for cheap clothes and things like that. I do feel like they’ve missed the mark because they had such a prevalent image of being affordable, and they made so much money.

‘They’re definitely at risk of becoming a bit lost and blurring into the background of all the other shops.

‘I was shocked. £22 for one pair of trousers that are literally a polyester material is just crazy. There’s just no need for it to be that expensive really.

‘I remember when I was younger I would go into Primark and get my holiday shop. I’d go in and come out with a few bags for under £50. 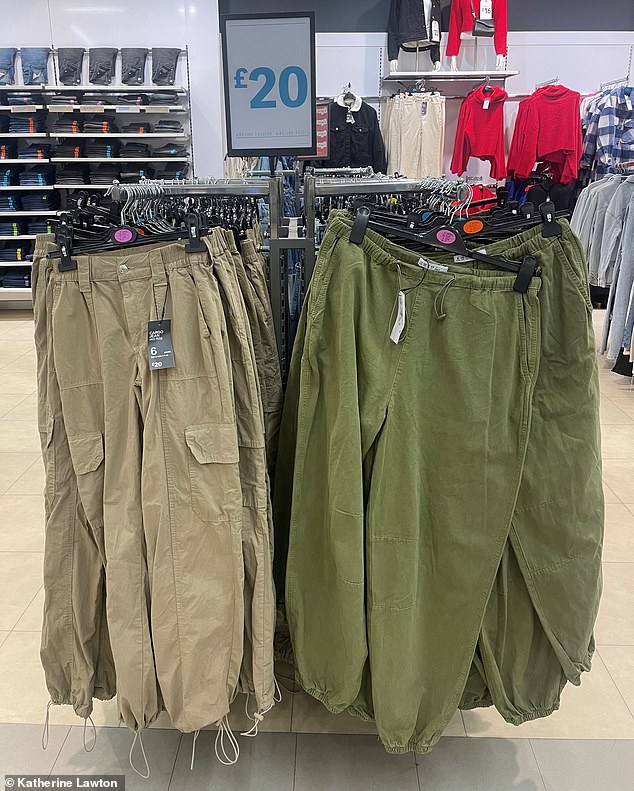 Twenty-one-year-old TikToker Lilly Whitfield, of Lincoln, posted a video to share her outrage at being charged more than £44 for two pairs of Primark trousers. Pictured: Trousers in Primark priced at £20 each

‘Just to go in and to see that they’ve put the prices up so much – yet the quality doesn’t seem to really reflect the price increase either – is why I returned the trousers I bought.’

Ms Whitfield, who has so far accumulated more than 32,000 followers on her fashion TikTok account, added: ‘I am very much aware of the cost-of-living that’s going on – you see it everywhere.

‘But to see Primark have gone up so much in price is actually quite scary.

‘Look at where Topshop have gone – they’ve been bought by ASOS which is really sad.’

Meanwhile, another angry TikToker with the username @holymorridge posted a video sharing her concern about the new price of a three-pack of thongs in Primark.

Receiving 1.6 million views, she said in the video: ‘I’m panicking and shaking. I’m just in Primark looking for my thongs. 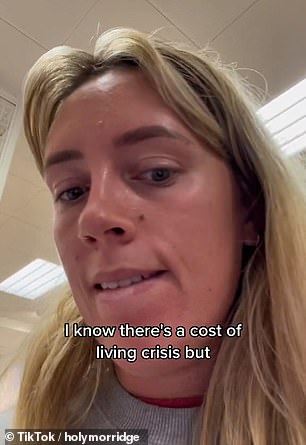 ‘I know there’s a cost-of-living crisis but I’m facing the crisis right now in the thong department. It’s caught me off-guard.’

Reactions to the video show other shoppers similarly frustrated by rising prices from the fast fashion retailer. One user wrote: ‘Primark needs to REMEMBER who they are.’

Another wrote: ‘I work there and I’ll tell you now I am shocked when I’m scanning stuff and realising how much it has gone up compared to a few months ago.’

Another recent video by @sumaiyahazam which showcases new-in items at Primark contains the caption: ‘Upped their game but also their prices.’

Another TikTok user, @erinvlogz, posted a video sharing her recent purchases in the store and captioned it ‘PRIMARK STOOP THE PRICE RISE!’

‘Two pairs of these cargos…20 buff each! I remember when that s*** was a fiver,’ she said.

Meanwhile, comments on a TikTok video discussing new festive items at the store show Primark shoppers up in arms about the cost of a Christmas vest top priced at £25.

One person wrote: ‘That moment when you realise you can’t even afford Primark anymore.’

Another said: ‘What happened to Primark tops? I remember when they were £2.50.’

One TikTok mother took to the social media app to share that she couldn’t ‘cope’ after discovering recent Primark prices.

In the video, she said: ‘Can we just talk about how expensive Primark is getting please?

‘Since when did Primark get so expensive? I know there’s an extreme rise in the cost of living at the moment, but I’m going to need Primark to settle their prices down a little bit because I can’t even cope.’

Primark workers have also revealed their outrage at the retailer’s recent price hikes, saying they have noticed significant increases in the store. 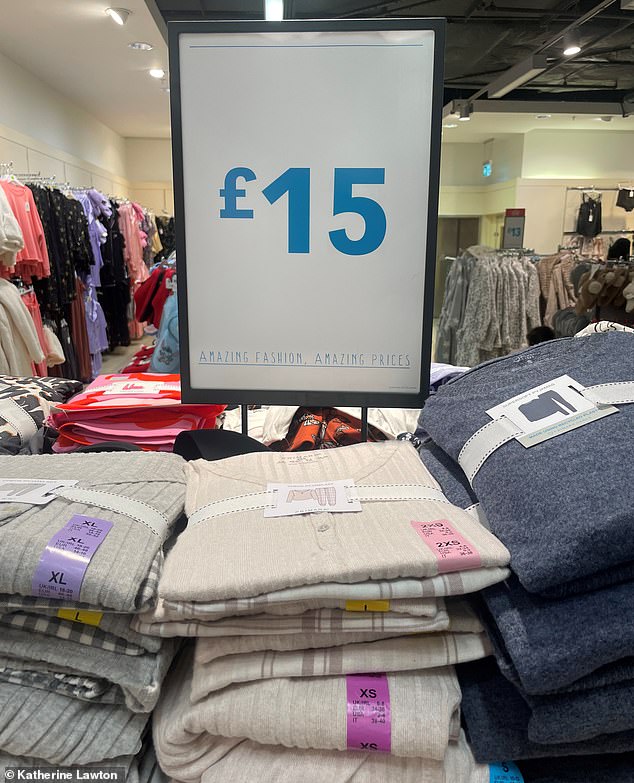 People on TikTok have expressed outrage at recent price hikes by the fast fashion retailer, with one commenting on a video: ‘That moment when you realise you can’t even afford Primark anymore’

‘A few years ago it probably would have been £10 maybe £15! It is crazy. But then…the cost of living is crazy and everything else is going up.’

Speaking of the ‘sneaky’ price hike accusations – when Primark were accused of trying to raise their prices without shoppers noticing – Ms Rymes said: ‘We had to rip off the old price tags and re-sticker the new price on with a white sticker.

‘If we didn’t know the new price or there wasn’t enough staff to do repricing then some items were left with no price on at all.

‘I personally didn’t get any angry customers. I think some people said it was misleading if something was the wrong price…but other than that no I don’t think so.’

One concerned TikToker, with the account name @lisa_nellie_dottie, explained how she picked two items out in Primark but was charged more than the label when she got to the till. 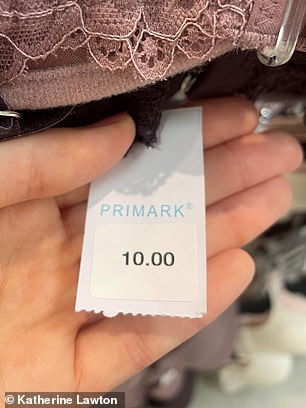 In the video, which received more than 2.4 million views, she said: ‘We’re just in Primark and I’ve bought a black leather look pair of shorts for £10 and some pyjamas for £12. At the till it came up as £12 for the shorts and £13 for the pyjamas.

‘If you notice in Primark that that they’ve ripped all the little tags off of everything, it’s because most items have had about a £2 increase.

‘So make sure you check the prices when you get to the till because basically you’re paying more than what you should be.’

A spokesperson for Primark told MailOnline: ‘We are committed to offering the very best value on the high street, something we knw if more important to our customers than ever.

‘We announced in April that due to increases in costs, we would have no option but to increase prices across a selection of this season’s ranges.

‘Customers may have noticed this in the form of new price stickers. This is because some of our new stock had already left our suppliers’ factories when the decision was taken so these were updated in-store.’ 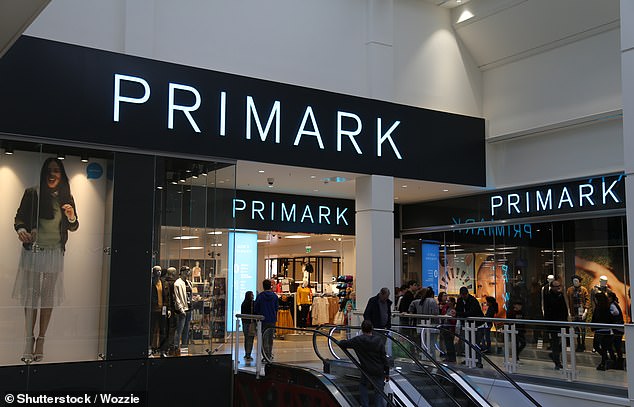 A spokesperson for Primark told MailOnline: ‘We announced in April that due to increases in costs, we would have no option but to increase prices across a selection of this season’s ranges.’ Pictured: Primark in Shrewsbury, Shropshire, on October 7, 2017