UK weather: New Year's Eve will be warmest on record at 63F

Hotter than Rome but without the blue skies! New Year’s Eve will be warmest on record at 63F – after one of the dullest Decembers ever with less than 27 HOURS of sunshine in the entire month

Britons could enjoy the country’s warmest New Year’s Eve on record today as temperatures soar as high as 17C (63F) after one of the dullest Decembers ever with less than 27 hours of sunshine across the month.

The Met Office said the conditions were ‘ridiculously warm’ for the time of year and more akin to temperatures seen in early April – with the average daytime high for December being just 7.6C (45.7F) in England and Wales.

An area of low pressure over Ireland is dragging warm air up from the coast of Africa, before temperatures in the daytime take a dramatic plunge from Tuesday, falling to highs of 8C (46F) in the South and 5C (41F) in the North.

But despite the warmth in recent days, which has seen the UK hit 60.3F (15.7C) both yesterday and on Wednesday, much of the UK has experienced grey skies and heavy rain which have caused some rivers to burst their banks.

And many areas were on flood watch today – with a total of 70 flood alerts across the UK including 51 in England, 17 in Wales and two in Scotland, as well as one flood warning threatening the West Yorkshire village of Walsden.

Britain’s dullest ever December was 65 years ago, when 19.5 hours of sunlight was the national average, while the sunniest was in 2001, with 64 hours recorded on average across the UK. This month has seen a total of just 27 hours so far, which is 38 per cent less sunlight than the December average and the lowest total since 1956. 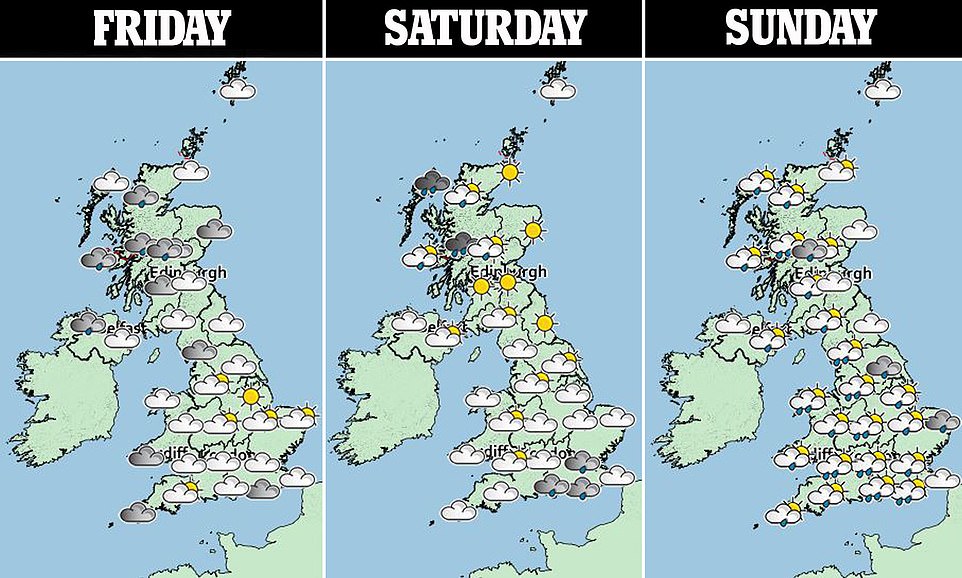 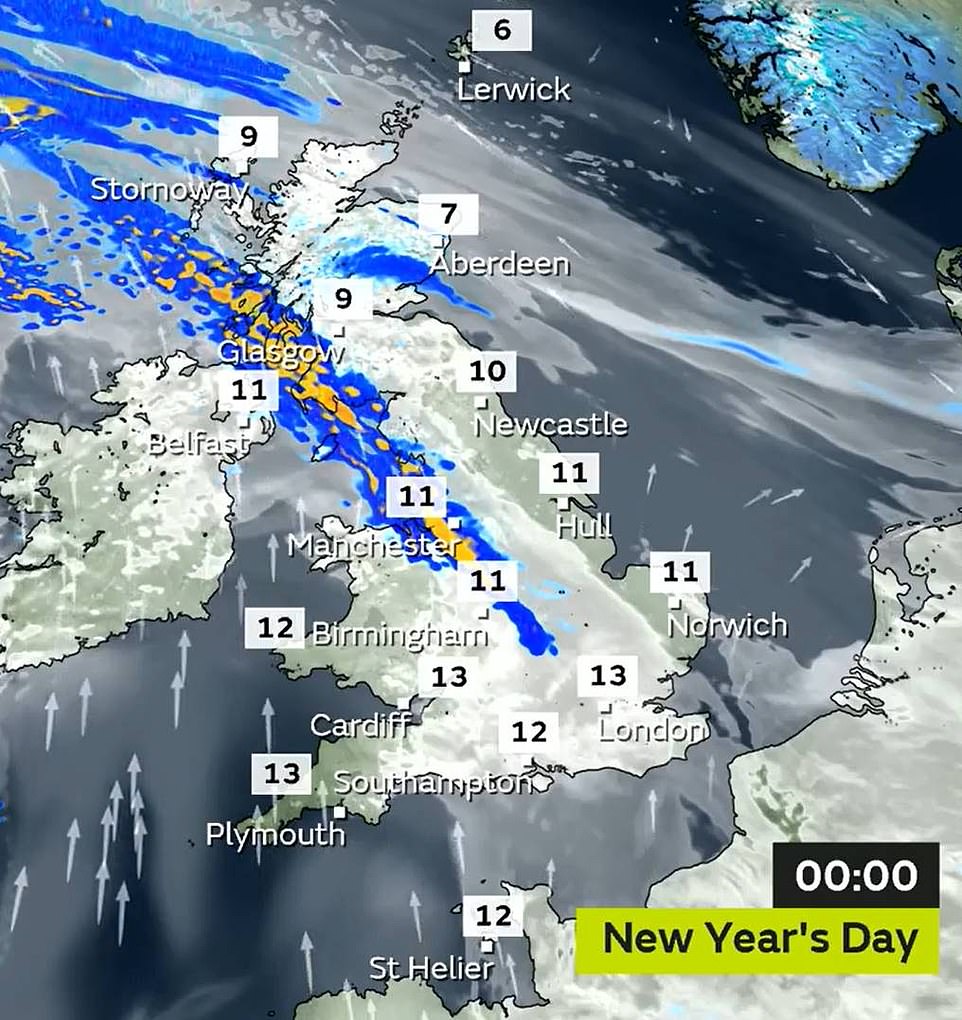 Met Office meteorologist Rachel Ayers said there was a ‘good chance’ of New Year’s Eve being the mildest ever.

She said: ‘In the south of the UK the weather should be dry for tomorrow so people should be able to enjoy dry weather with some bright spells around.

Back in time: The Big Freeze on NYE 1962 when the milk came on skis 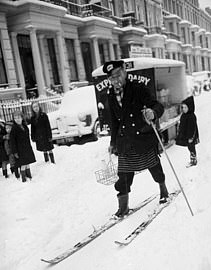 The warm temperatures at the end of 2021 are a far cry from the icy days of 1962, when London and the rest of the country experienced a Big Freeze going into 1963, with temperatures going as low as -20C (-4F).

Pictures taken during what was the coldest winter in Britain since 1740 even showed one enterprising milkman doing his round in Earls Court on skis.

During the Big Freeze, a blizzard on December 29 and 30 across Wales and South West England caused snowdrifts nearly 20ft deep, after a white Christmas when nearly a foot of snow fell across southern England. 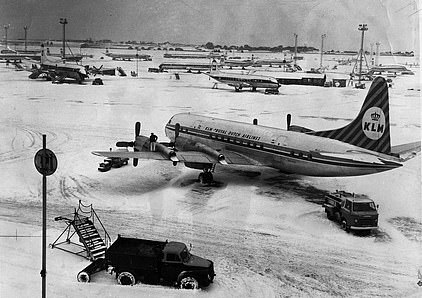 The snowy scenes at London Airport on December 30, 1962

‘For New Year’s Day, another band of rain is pushing in from the west so the further east you are the drier your day will be with some bright spells.’

On New Year’s Eve, the UK can expect to see early rain across central, eastern and southern England which will clear eastwards to leave a brighter and drier day.

Across Northern Ireland, Scotland and northern England, cloud and outbreaks of rain will linger for much if not all of the day, though it will become patchier.

It will be a windy day for many, particularly across north Wales and northern England.

The Colwyn Bay maximum is the highest in the Met Office’s digitised database which contains data going back to the 1850s.

Met Office senior operational meteorologist Marco Petagna tweeted today: ‘As we enter the final day of 2021 it’s set to be a record breaker. The New Year’s Eve high temperature record for the UK is 14.8C Colwyn Bay 2011. We’re set to smash that today, with highs of 16, possibly at a push 17C!’

Yesterday’s unseasonably toasty weather was enough to tempt out day trippers as far afield as Tynemouth, where children built sandcastles on the beach, to Cambridge, where families enjoyed the traditional summer pastime of punting on the Cam.

In Bournemouth surfers made the most of the waves, while in London jugglers in their shirtsleeves performed on unicycles in Covent Garden.

The capital could also be the setting for today’s expected record temperature, thanks to less breeze than in previous days.

Met Office meteorologist Greg Dewhurst said: ‘We’re going to see across the whole of the country temperatures that are above average for this time of year. 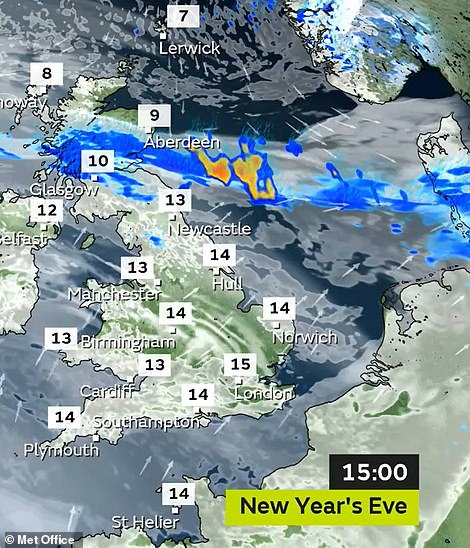 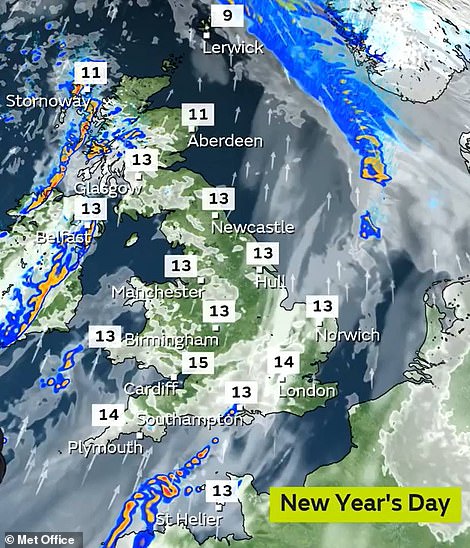 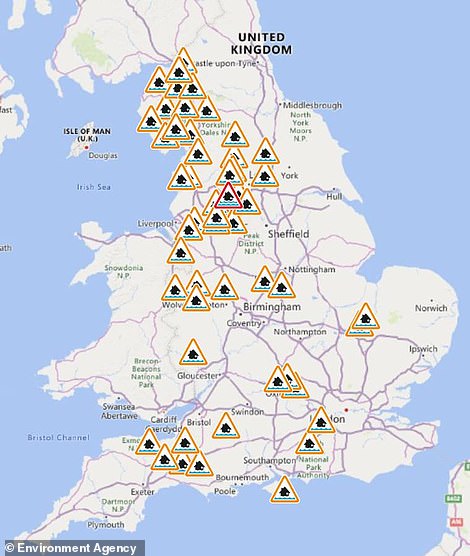 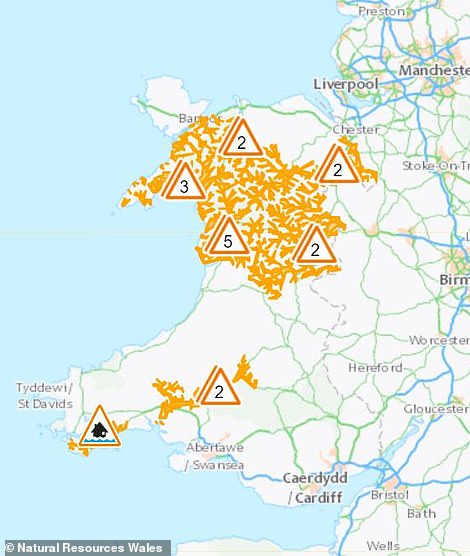 There were 51 flood alerts (in orange, left) imposed by the Environment Agency for England today, plus a flood warning (in red, left) for the West Yorkshire village of Walsden, as well as  17 flood alerts from Natural Resources Wales (in orange, right) 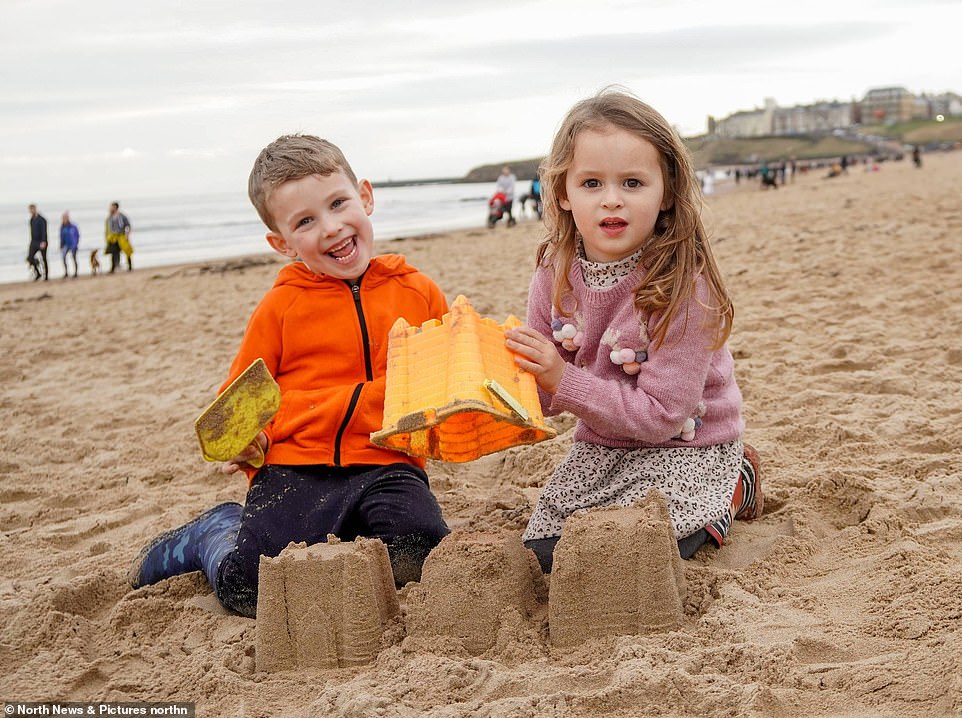 Britain has suffered one of its dullest Decembers

Britain is likely to have suffered one of its dullest Decembers ever, according to forecasters.

The UK has seen less than 27 hours of sunshine across the past 30 days – 38 per cent less than the national average for this time of year, the Met Office said. The figure places this month in the running to become one of the top 10 dreariest Decembers on record.

‘If things don’t change, then it will probably be up there as possibly one of the top 10 dullest Decembers across the UK. We’ve only got two more days to go,’ Met Office forecaster Snell said. He told how the dull weather was linked to milder temperatures across winter generally, which are likely to be caused by global warming.

‘One of the reasons we’re getting the dull weather is the fact that it’s been so mild. We’re drawing in south-westerly wind from the Atlantic and it’s also drawing in a lot of moisture. It keeps us warm but it also produces a lot of cloud,’ he said.

The forecaster added: ‘The globe is warming up so we would expect our winters to be milder than they were. We always have milder spells throughout the year so we can’t link every mild spell to climate change but we can say that extremes in our weather will become more common as we continue through this century.’

The mild temperatures have also contributed to the persistent dull weather, however. Only three Decembers in 100 years have had less sunshine than this month.

Forecaster Craig Snell of the Met Office said: ‘One of the reasons we’re getting the dull weather is the fact that it’s been so mild. We’re drawing in south-westerly wind from the Atlantic and it’s also drawing in a lot of moisture.’

‘It keeps us warm but also produces a lot of cloud. The globe is warming up so expect our winters to get milder.

‘We always have milder spells throughout the year, so we can’t link every mild spell to climate change, but we can say that extremes in our weather will become more common as we continue through this century.’

Speaking about Scotland’s forecast for tonight, Mr Snell added: ‘It will be ridiculously warm for the time of year.

‘I know there are restrictions on social gatherings in Scotland but anyone who does leave the house after midnight will encounter temperatures more akin to springtime – and during the day at that.’

In Scotland, places such as Glasgow, Inverness and Aberdeen could see a bit of rain as the country approaches 2022, with the South-East of the country remaining dry.

New Year’s Day will see some improvement, with most people seeing some brightness at some point in the day.

Temperatures will start to slip away on Sunday, when 10C (50F) is still possible, but by Monday the mercury will be down to single figures.

Bob Ward, policy director at the Grantham Research Institute on Climate Change, part of the London School of Economics, said: ‘Winters have been getting warmer and wetter for some time now.

‘The bitterly cold days we used to experience in December will become less frequent, all down to climate change. It is going to play havoc with plants and animals.

‘It is becoming so warm, some species simply won’t disappear in winter. Animals which traditionally hibernate in winter will be confused by the higher temperatures.’