‘Did I lose my legs for nothing?’ Royal Engineer, 32, who suffered horrific injuries in Afghanistan IED blast says British soldiers ‘died in vain’ as country falls into hands of the Taliban

A British army veteran who lost both his legs in Afghanistan said it was for ‘nothing’ and British soldiers ‘died in vain’ as the Taliban seized control of Kabul.

Bomb disposal expert Jack Cummings, 32, said he is ‘heartbroken and devastated’ to see Afghanistan fall into the hands of the Taliban after the West’s withdrawal.

The royal engineer tragically lost both of his legs in Afghanistan and spent a month in a coma after an IED blast blew him 10ft into the air.

As the Taliban closed in on Kabul on Saturday, Mr Cummings marked exactly 11 years since the day in Helmand which changed his life forever. 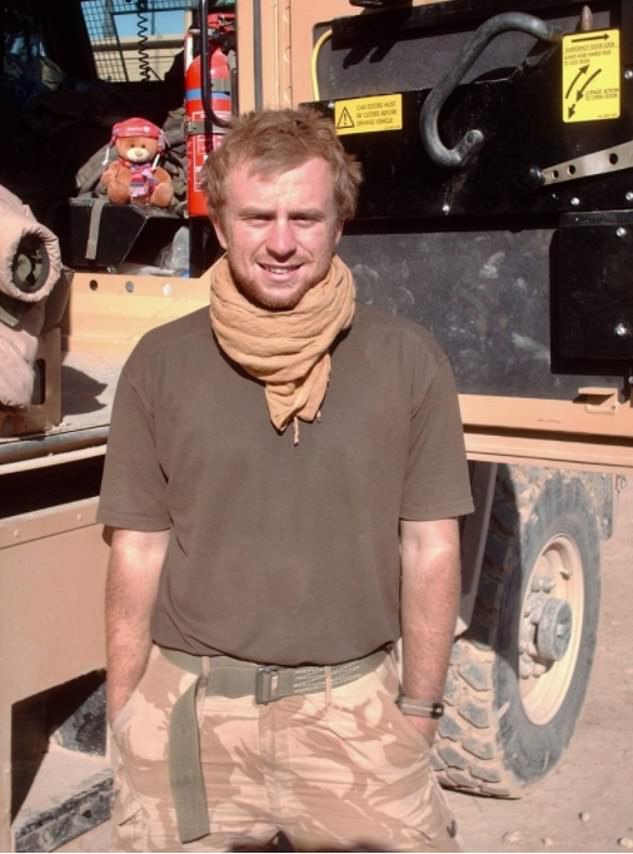 Bomb disposal expert Jack Cummings (pictured), 32, said he is ‘heartbroken and devastated’ to see Afghanistan fall into the hands of the Taliban after the West’s withdrawal

Taking to Twitter, he penned: ‘Was it worth it, probably not. Did I lose my legs for nothing, looks like it. Did my mates die in vain. Yep.

‘Many emotions going through my head, anger, betrayal, sadness to name a few.’

He also told Sky News on Monday that he was ‘lost for words’ after seeing the country ‘go up in smoke’ so quickly after the UK and US withdrew their troops from Afghanistan.

Mr Cummings added that although he knew the risks of his job disposing bombs in Afghanistan, he said he felt like he was making a difference and is now devastated to see the Taliban take control.

He continued: ‘Just how easy the Taliban have taken over the country, I’m just lost for words. Seeing the events unfold in Afghanistan, just heartbreaking and devastating to see.

‘The country I fought in and fought for has just gone up in smoke like that.’ 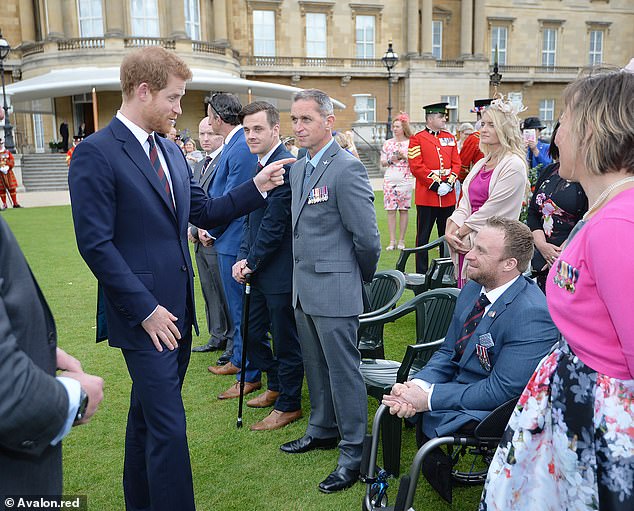 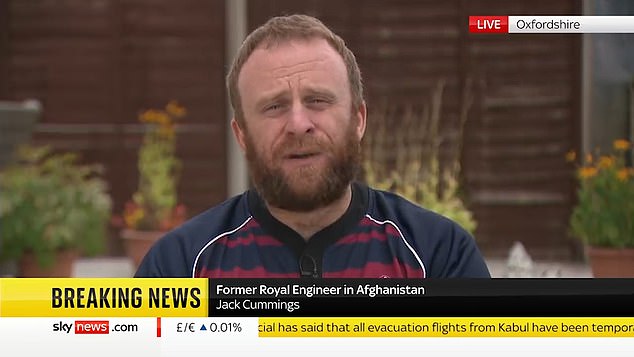 Mr Cummings said he remains proud of the work he did in Afghanistan finding bombs and improvised explosive devices (IEDs) and said he feels ‘sorry’ for the country after watching the events unfold over the last week.

The veteran insisted that he knows the Western troops could not have stayed in Afghanistan, but said it doesn’t ‘feel right’ to watch the Taliban seize control of Kabul so quickly, which has seen thousands of Afghans attempting to flee the country.

He also addressed fears that hundreds of former Afghan military translators may be abandoned to face the revenge of the Taliban.

The bomb disposal expert insisted that the interpreters deserve to be free and shared his hope that the UK will try to rescue as many of them as possible.

He added: ‘If anybody deserves the right to be free, live in peace and come to the UK, it’s the interpreters who helped Western forces.’

Activists estimate that – when interpreters’ families are included – there are around 1,000 men, women and children who could miss the chance of a deserved new life in Britain and instead be left to the brutal mercy of the Taliban.

Government sources said that a total of around 1,700 ‘former locally employed staff and their families’ have been told they can come to the UK.

It comes after Major Herbert warned that the Prime Minister will have ‘blood on his hands’ if any interpreters are abandoned to their death by Britain.

He said: ‘If any interpreters or their family members are murdered by the Taliban, Boris Johnson, the Defence Secretary Ben Wallace and the Home Secretary Priti Patel will have their blood on their hands.

‘It is too late now for most interpreters caught in areas controlled by the Taliban. I am getting messages from them and they are heartbroken and terrified. They are hiding for their lives as the Taliban go from house to house trying to find them.’

When Taliban closed in on Kabul, the interpreters spoke of scenes of chaos as those given permission to relocate tried to confirm flights, those waiting for their cases to be decided pleaded for a decision and those rejected accused the UK of ‘leaving us behind for the Taliban to avenge’. 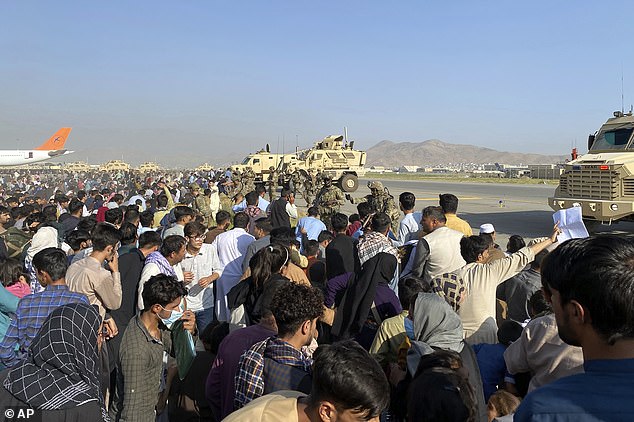 U.S soldiers stand guard along a perimeter at the international airport in Kabul amid a sea of hopeful refugees 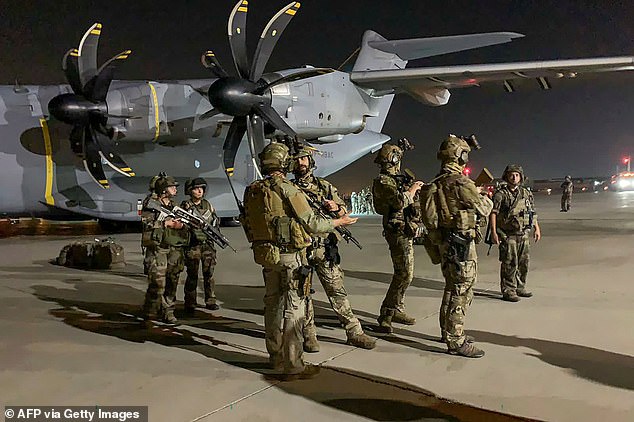 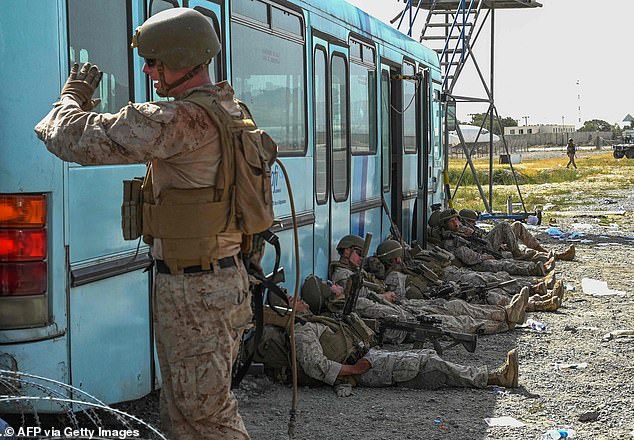 US soldiers rest as Afghan people (not pictured) wait to leave the Kabul airport in Kabul on August 16, 2021, after a stunningly swift end to Afghanistan’s 20-year war, as thousands of people mobbed the city’s airport trying to flee the group’s feared hardline brand of Islamist rule

Najib, who worked for eight years with UK forces and has been granted sanctuary, said: ‘It was a terrifying moment to see our enemy on the streets of our capital as victors. We all fear for our lives. We do not know if the British can still save us, maybe it is now too late.’

The 37-year-old, who has a family of four, added: ‘We are all afraid of what the future holds and the reality is that many of the interpreters will be left behind.’

The Defence Secretary had personally overturned the decision to deny sanctuary in Britain to 60 translators previously barred from relocating here due to minor criminal convictions or disciplinary issues which ended their service.

They were among a batch of 88 ‘contentious cases’ which were sent to Mr Wallace following pressure from this newspaper’s Betrayal of the Brave campaign.

Others who contacted the British Afghan team working on the cases said their calls and emails went unanswered as officials face a massive workload, under mounting pressure to analyse each scenario.

UK-based translators said many MPs had offered their support and would call on ministers to save those at risk because of their work alongside British forces.

Meanwhile, pandemonium unfolded at Kabul airport after thousands of Afghans stormed runways and attempted to force their way on board flights out of the country, temporarily halting evacuation missions which resumed early Tuesday after thousands of US troops helped clear the tarmac.

Some 640 Afghans were seen crammed into a C-17 jet, fitted to carry 150 soldiers but can take 171,000lbs of cargo, earlier today as American soldiers were seen cradling the US embassy flag while removing it from the country.

The embassy in the Afghan capital closed down on Sunday following reports that officials there were destroying sensitive documents and equipment ahead of the Taliban’s arrival. 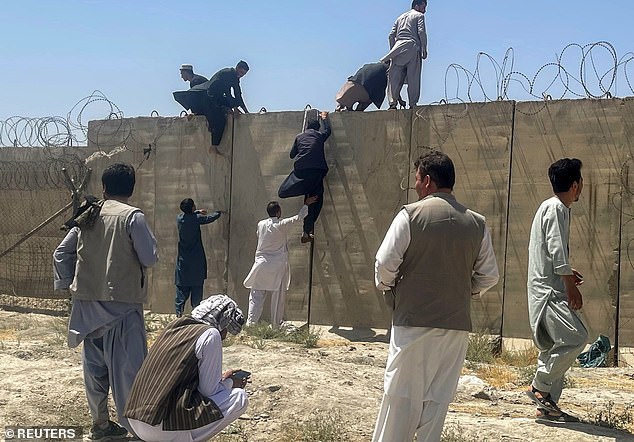 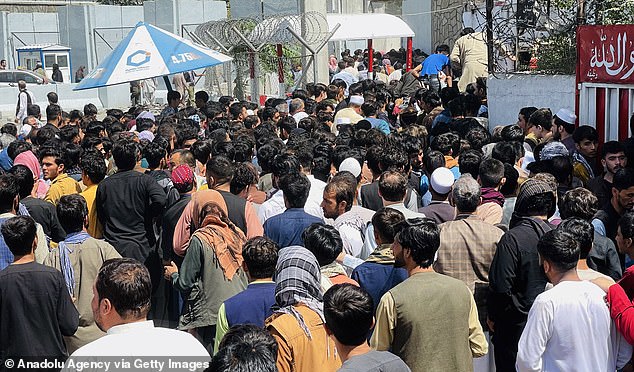 Thousands of Afghans rush to the Hamid Karzai International Airport as they try to flee the Afghan capital of Kabul, Afghanistan, on August 16, 2021 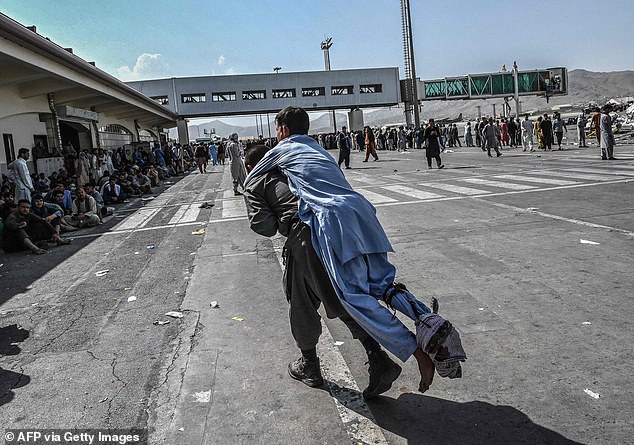 A volunteer carries an injured man on the tarmac at the airport in Kabul on August 16. The chaos unfolded on Monday as thousands rushed to the airport in a desperate attempt to flee the Taliban after the country’s 20 year civil war

There are thought to be at least 40,000 people who need evacuating from the country – including 30,000 US diplomats, visa holders and Afghans they have promised sanctuary, 4,000 Britons and an unknown number of other westerners including Spanish, French, Germans and Poles.

The US has so far flown at least two C-17 cargo jets out of Kabul and more flights are expected later this week despite chaos on the ground on Monday which left eight people dead, including desperate stowaways who fell from the sky in harrowing scenes.

The refugees – including many women and young children – ran onto one of the planes’ half-open ramp before take-off and ‘the crew made the decision to go’, taking them with them, an unnamed defense official said.

America is hoping to fly out some 5,000 people per day and the UK 1,200 – though both managed just a few hundred on Monday, meaning the operation is likely to drag on for weeks, if not months.

Politicians in both the UK and US have urged their government to be ‘generous’ with granting asylum to Afghans who helped in the war effort, but there are fears that thousands will be left behind amid the chaos.