Victoria has recorded 1749 new cases of coronavirus and eleven deaths, as the state government announced 20 new GP respiratory clinics will be established around Melbourne to ease the strain on hospital emergency departments.

The new locally acquired cases were recorded among 68,702 tests, and were down from 1903 cases recorded the day before. 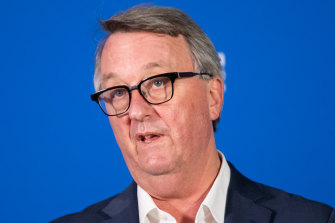 Health Minister Martin Foley said the clinics would be established in areas of high demand and will reduce visits to emergency departments.Credit:Jason South

There were 36,751 doses of the vaccine delivered on Monday – 89.2 per cent of Victorians over the age of 16 have now had their first dose of the vaccine, and 66.5 per cent have had two doses.

The new respiratory clinics will aim to provide support to 350 patients a week, allowing them to access COVID-19 testing and respiratory assessments close to home without going to hospital.

Health Minister Martin Foley said the clinics would be established in areas of high demand and will reduce visits to emergency departments.

The clinics, to be set up in three to six weeks, will be available to people with or without a Medicare card. The new clinics will be located in the LGAs of Hume, Wyndham, Brimbank, Moreland, Darebin, Moonee Valley, Melbourne, Maribyrnong, Melton, Casey, Greater Dandenong, Monash, Kingston, Cardinia, Whittlesea, Banyule and Boroondara.

The move to establish 20 new GP respiratory clinics comes amid an incredibly difficult period for the state’s health system, which has seen record numbers of Victorians seek medical treatment in hospital emergency departments.

Doctors have also warned an increasing number of people with respiratory symptoms were arriving in hospital emergency departments, potentially infected with coronavirus, putting vulnerable patients and staff at risk.

Late last month, calls to triple-zero reached levels not seen since the 2016 thunderstorm asthma event, prompting new warnings that the Victorian health system will struggle to cope with an expected rise in hospital admissions from COVID-19.

In the coming weeks as COVID hospitalisations are predicted to peak, hundreds of people who would usually get an emergency ambulance response will instead be managed by a secondary referral service and be spoken to by a nurse or paramedic.

Instead, they might be asked to go to their GP or make their own way to hospital. 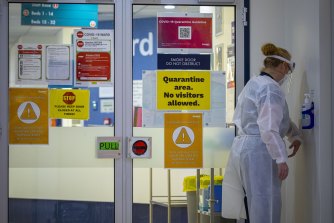 A staff member on the Austin Hospital’s COVID ward.Credit:Wayne Taylor

“It’s something we would have liked not to have done, but that is the state of the nation, we’re in such dire circumstances we have to do it,” he said.

Doctors also told The Age on Tuesday that urgent “category one” elective surgeries are being postponed because of a worsening bed shortage in Victorian hospitals, as people suffering painful conditions that impair their ability to work are having operations cancelled to make room for COVID-19 patients.

The number of Victorians waiting for elective surgery has swelled by more than 15,000 people since the beginning of last year and some surgeons now expect that it won’t be until next year that many of the “distressing” restrictions on elective surgeries, aimed at freeing up hospital capacity, will lift.

On Tuesday, the Queensland government released its plan that outlines when travellers would be able to enter the state more freely.

Premier Annastacia Palaszczuk announced November 19 as the date given for Queensland to hit 70 per cent of its population fully vaccinated – at which point travel would be allowed again from hotspots, notably Victoria and NSW, with some conditions. 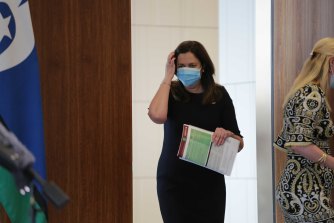 December 17 has been locked in as the expected date for travel to resume.Credit:Matt Dennien

December 17 has been locked in as the expected date for 80 per cent of people double-dosed, which would see a further easing of restrictions.