Deputy Premier Roger Cook’s department exempted a Texan oil and gas company from Western Australia’s onshore gas ban in the hope it will build a pipeline to open up the region to more gas production.

The decision came just months before the WA government plans to make public its process to develop interim greenhouse gas emissions targets towards net-zero by 2050. 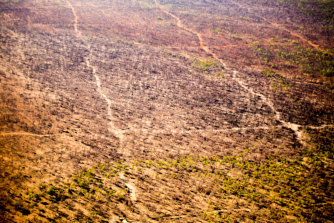 Paths of cleared vegetation for seismic testing to find oil and gas in the Kimberley. Credit:Lock the Gate

In early October, Black Mountain Oil and Gas’ Valhalla field became the second project allowed to export onshore gas from WA since a ban was introduced in August 2020.

Black Mountain subsidiary Bennett Resources wants to drill up to 20 exploration wells as deep as four kilometres over seven years, according to its submission to the WA Environmental Protection Authority.

“You really need higher gas prices to justify development because you’ve got to build all new infrastructure, roads, pipelines, etcetera, to get to market,” Mr Bennett said.

“The Canning Basin, it’s a supergiant … it’s going to be very material.”

The company founder said he always knew Valhalla needed access to the international markets to be viable, but it had to be balanced with the WA government’s “strong desire to continue to make gas abundant within the state”.

A Department of Jobs, Tourism, Science and Innovation spokeswoman said the policy to ban the export of onshore gas to ensure WA had plentiful and affordable gas allowed for exemptions in exceptional circumstances.

The spokeswoman said the exemption recognised the challenges faced by the Valhalla project and the potential for Black Mountain to build a pipeline that could be the foundation for the further development of the Canning Basin.

Without an exemption, Black Mountain would almost certainly not drill the Kimberley, but with the ability to export it could pay to connect the Canning Basin to both local and international markets to the benefit of future producers, not just itself.

“The Canning Basin, it’s a supergiant … it’s going to be very material not only to WA, but I think to the national economy,” Mr Bennett said.

Mr Bennett said Black Mountain was in discussion with two Australian companies about building a pipeline to connect to the WA gas network near Port Hedland and then export the gas using spare LNG plant capacity.

The destination for Valhalla’s gas could only be Woodside’s North West Shelf plant near Karratha, which is already contracted to process gas from the Waitsia gas project.

Cooling gas to a liquid form for shipping is an incredibly energy-intensive process and the major reason WA’s greenhouse gas emissions have risen over the past decade.

“Opening up the Canning Basin for development by supporting a pipeline to connect this resource to export markets is quite simply unthinkable at a time when we must dramatically and urgently reduce carbon pollution in order to maintain a habitable planet,” Mr Verstegen said.

Mr Cook, also the Minister for State Development, Jobs and Trade, told Parliament in June that the federal National Party wanted to drag Australia back to the “dark ages of coal, climate change denial and taking WA’s economic future backwards.”

In contrast, the state government had a “green energy vision for WA.”

Mr Cook said the government was “committed to transitioning the WA economy to net-zero emissions by 2050, while protecting jobs, and is being guided by science to drive climate action.”

Mr Cook, who is a member of WA’s Ministerial Taskforce for Climate Action, said the Valhalla project was at an early stage of development.

“Black Mountain will need to obtain all necessary approvals, including environmental approvals, before implementing the project,” Mr Cook said.

“The Traditional Owners also need to consent to any activity on their land.”

Valhalla is the first proposal for fracking, or hydraulic fracking, to be assessed by the EPA since the McGowan government lifted its statewide moratorium in 2018.

The JTSI spokeswoman said Black Mountain also needed to finalise a domestic gas supply agreement with the state, as only some of its gas was exempted from the export ban.

Black Mountain set itself another hurdle in December 2020 when it committed to Valhalla having net-zero direct emissions.

Mr Bennett said the company was investigating direct air capture to offset its emissions. The technology, which has not been proven at scale, extracts carbon dioxide from the atmosphere for burial underground.

allows, e, Fracking, Kimberley, Wa
You may also like: