Disabled wheelchair-using grandfather, 64, had to drag himself off Jet2 flight after cabin crew refused to help him due to health and safety rules

A disabled grandfather was forced to drag himself off a plane after cabin crew refused to help him due to health and safety regulations.

Elliot Pinsley, 64, a wheelchair user, was told he may have to wait up to 90 minutes to disembark the plane as special assistance staff were too busy to attend to him.

After waiting up to half an hour he asked cabin crew to help him disembark but crew on board the Jet 2 aircraft told him they were unable to help due to health and safety restrictions.

They looked on as Mr Pinsley, who was desperate for the bathroom, hauled himself up and dragged himself along the aisle of the plane by holding onto the backs of the seats.

A crew member walked behind the grandfather-of-four providing no physical assistance as he struggled down their aisle.

Gasping with the effort, Mr Pinsley was left exhausted and emotional after he finally made it off the plane and into his own wheelchair. 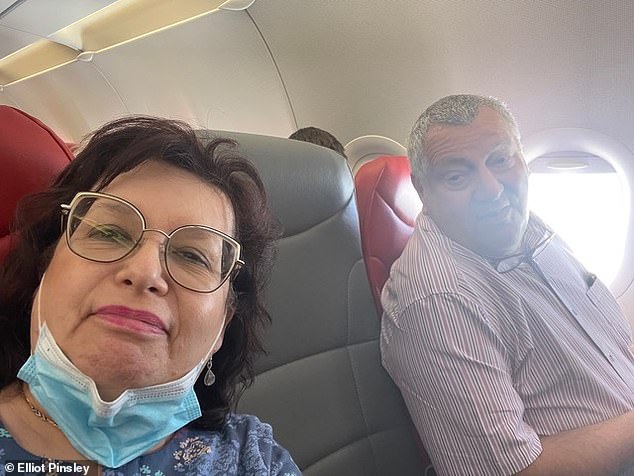 Elliot Pinsley, 64, pictured with his wife Jakki on the plane as they returned home from a holiday in Marbella

Now he is demanding airports take action to prevent other disabled people being abandoned on aircraft.

‘It’s disgraceful,’ he said. ‘I can’t believe I was treated so badly. They said they couldn’t help me at all due to health and safety reasons. It’s totally ridiculous. What would have happened if there had been a fire?

‘I can’t walk but I had to haul myself up using the backs of the seats and physically drag myself off the plane. It was a huge, huge effort – for me it was like running a marathon or climbing a mountain.’

Mr Pinsley, from Salford, Greater Manchester, who ran his own retail business before he became ill, said: ‘You wouldn’t treat an animal like that. I don’t get angry very often but I was so frustrated and utterly exhausted.’

His ordeal happened after he and his wife, Jakki, were returning from holiday in Marbella last Monday, June 20, where they had spent a week celebrating her 60th birthday with friends.

Mr Pinsley has suffered from a serious neurological condition, Paraneoplastic Syndrome, since 2005 and has been wheelchair-bound since 2013. 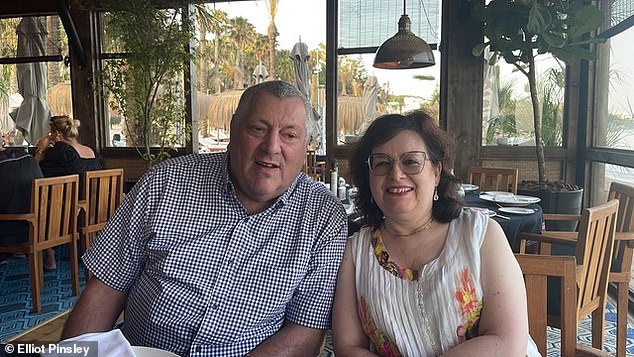 Mr Pinsley’s wife Jakki (pictured together on holiday) said: ‘We were just abandoned in our seats and we waited and waited. Eventually the crew got off and a new crew took their place’

He and Jakki pre-booked special assistance both ways and had no problems boarding their return flight at Malaga Airport.

But on arrival at Manchester Airport they were told there would be a long delay in special assistance staff arriving with a wheelchair.

After waiting around half an hour they were eventually told it could take at least another hour before staff could help them off.

Mrs Pinsley, a receptionist in a care home, said: ‘All the passengers had got off, including our friends who had invited us on holiday.

‘Then the cabin crew told us there was a long wait for wheelchairs and we could be there for a long time.

‘We were just abandoned in our seats and we waited and waited. Eventually the crew got off and a new crew took their place.

‘We were getting very stressed and and frustrated. Elliot needed the bathroom and eventually said he would try and get off the plane by dragging himself along using the seats. 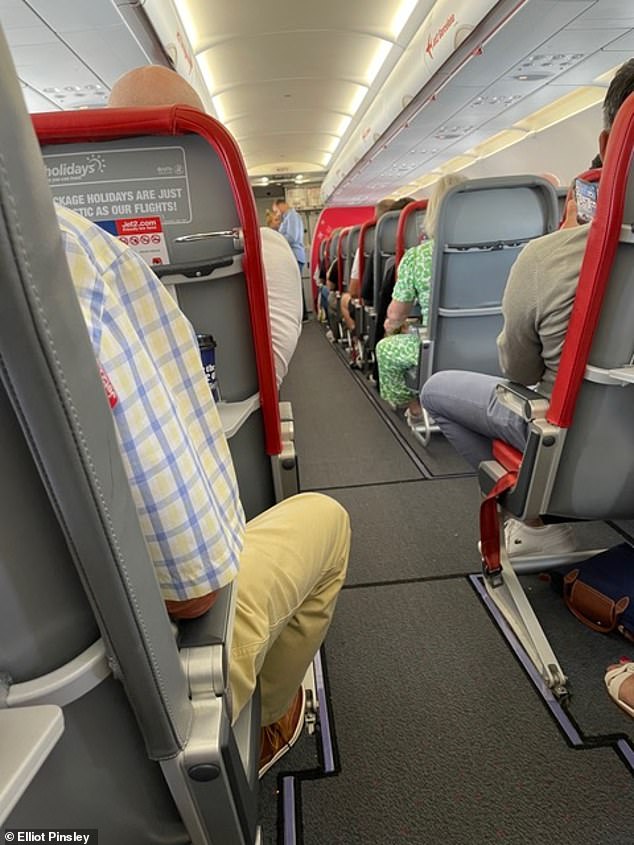 ‘I was so worried and scared for him because I know how dependent he is on his wheelchair.’

Mrs Pinsley said: ‘We asked the cabin crew for help but they refused saying they were prevented from doing so due to health and safety regulations.

‘They stood by and watched Elliot drag himself along the aisle of the plane. I guided him and praised him as he was going along slowly and carefully so he didn’t fall.

‘For him it was like climbing a mountain or running a marathon. By the time he made it to his own wheelchair he was absolutely exhausted. I couldn’t believe the cabin crew were unable to lift a finger to help.’

Mrs Pinsley said: ‘Why would you treat someone like this? It’s inhumane, undignified, disrespectful and appalling.

‘This should not be happening in 2022! Isn’t it about time things changed and people respected and helped people with disabilities?

Airports across Britain claim staffing problems in the wake of the Covid pandemic had led to problems at airports.

But Mrs Pinsley said: ‘Every country has been through the pandemic so why is Britain the only country that can’t cope? Covid is not a plausible excuse anymore.’

Jet 2 claimed a staff member walked behind Elliot as he struggled down the aisle but that cabin crew were not able to help further due to strict regulations.

A spokeswoman said: ‘We understand that this is not the experience that our customers expect when travelling with us, so we would of course like to apologise to Mr Pinsley. We have spoken with the customer to offer our apologies and from that discussion we are satisfied that our team did provide assistance.’

A Manchester Airport spokesman said: ‘We take special assistance requirements very seriously and, prior to the pandemic, were rated ‘good’ in the Civil Aviation Authority’s most recent Airport Accessibility report.

‘We are confident that most people with special assistance needs travelling through our airport have a positive experience, but we recognise that this was not the case here.

‘We will continue to work closely with our specialist provider to ensure passengers requiring special assistance receive the best service possible and to understand how a repeat of this case will be avoided.’