A mum-of-two who suffers from incontinence wet herself in River Island after staff refused to let her use their toilet – and placed a ‘Wet Floor’ sign next to her.

Bianca Artwell, 30, suffers from Functional Neurological Disorder (FND) – a condition that affects her nervous system and how her brain and body send and receive signals.

Her symptoms include weakness or paralysis, tremors or tics, difficulty walking, loss of balance, and incontinence.

Last week Bianca was in River Island in Elliott’s Field Retail Park in Rugby, Warwickshire, where she was returning a pair of shoes for her three-year-old daughter.

But as she approached the till she realised she needed the toilet – something she struggles to control due to her FND.

She asked staff to use the store’s toilet, explaining her condition and that she was unable to wait but they refused, saying it was against company policy.

Despite pleading with staff and the store manager, Bianca was told to go to a cafe across the road, but as she tried to leave the store she was unable to hold on and wet herself.

Rather than offering to help, staff ignored the distraught mum-of-two and instead put a ‘wet floor’ sign next to her. 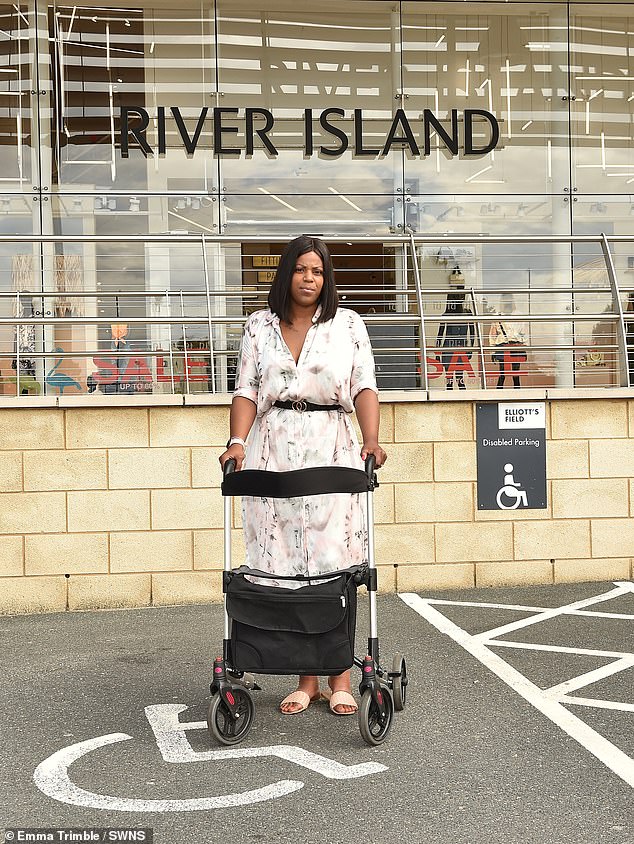 Bianca Artwell, 30, from Rugby, who suffers from Functional Neurological Disorder has blasted River Island staff who wouldn’t let her use the staff toilets. She ended up wetting herself in the store, and claims a Wet Floor sign was placed beside her

Bianca said: ‘On this particular day I felt quite independent with my aids so I asked my friend to watch my daughter while I went into River Island using my crutches so I could swap some shoes I had bought.

‘As I approached the till I knew instantly that my bladder retention was about to reverse and I needed to go urgently.

‘I asked the ladies at the till if I could please discreetly use their toilet and explained I wouldn’t make it if I didn’t go immediately.

‘They said no and said I needed to go to a coffee shop across the road. 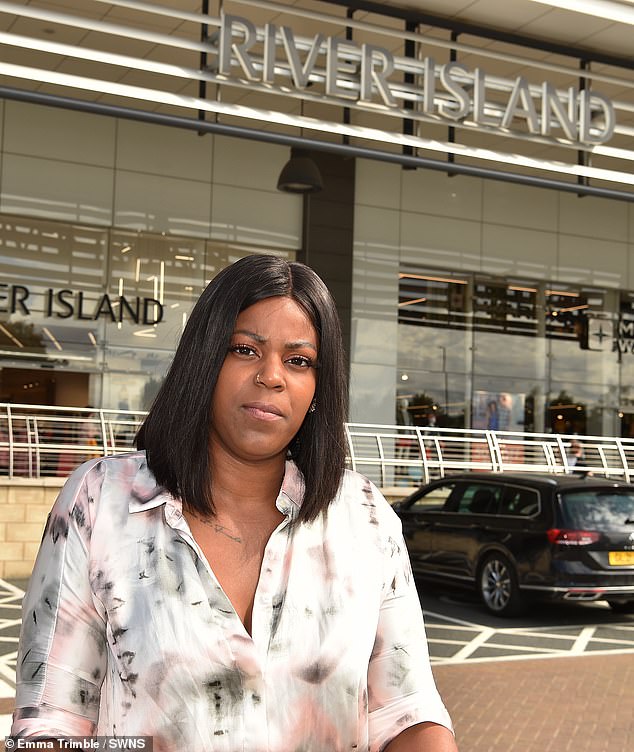 ‘I pleaded again explaining I definitely wouldn’t make it there but they refused.

‘I tried to at least make it outside but only got maybe a metre and a half away from the tills before my worst fears happened. My bladder let go.

‘Stood in a pool of my own urine I turned to the three staff members on the till and explained I was really sorry but I had had an accident.

‘They just stared at me and the manager who was getting ready to leave instructed them to put a wet floor sign down.

WHAT IS FUNCTIONAL NEUROLOGICAL DISORDER?

Functional neurological disorder (FND) is a disabling cause of neurological symptoms. People with FND can experience a wide variety of symptoms including:

While the symptoms may appear similar to neurological diseases including those of multiple sclerosis, Parkinson’s and epilepsy, and can be just as disabling, they are not caused by structural disease of the nervous system, but instead are a problem with the ‘functioning’ of the nervous system and are often called ‘medically unexplained’.

People with FND appear to lose the ability to control or access their body normally. The ‘basic wiring’ of the nervous system is intact, but when people with FND try to use it to move, feel or think, they cannot control it normally.

For most people the symptoms are only short-lived, but in others they can last for months or years.

Its cause is poorly understood but scientists have likened it to a glitch in the brain which cause symptoms to continue after they are first experienced because of a physical injury, infectious illness, panic attack or migraine.

Depending on their condition patients may be given physiotherapy, psychological therapy or occupational therapy – or a mix.

‘I stood there frozen in complete horror.

‘A staff member came up to me but instead of offering to help she just dropped the wet floor sign next to me and walked away.

‘Stood in shock I assumed she must be coming back but instead she and her colleagues carried on their conversation.

‘The manager even walked past me and shouted bye to her colleagues and just looked at me in my mess and left the premises.

‘As other customers arrived, walking past me and my wet floor sign, it finally occurred that this was my problem and the staff weren’t going to help me in any way.

After phoning for help, two of Bianca’s friends came to her aid, helping her out of the store and taking her to another shop to buy clean clothes and personal cleaning products.

Bianca, who works as a beauty therapist, lodged a formal complaint and demanded River Island staff are given better training.

She added: ‘I’ve previously worked in retail for years and there are characteristics that are exempt from this such as, elderly, pregnant women, children and those with disabilities.

‘Is it policy to further fail a customer after an accident like this by offering no compassion, no dignity or treating them like a human being?

‘I’ve never in my life been treated in such a cold manner. Left in the doorway of a shop with a sign directing people to look at the freak show, with no covering or support.’

Bianca says she was offered a new outfit from the shop which she refused to accept.

River Island, which has around 300 stores in the UK, have apologised to Bianca.

A spokesman said: ‘Every one of our customers matters to us and we were sorry to hear of this customer’s experience in one of our stores.

‘Our Head of Customer Care is already in direct communication with this customer and we are reviewing our policies and procedures to ensure that everyone feels welcome and cared for whenever they visit our stores.’